The new Centerfield Plaza will connect the outfield to the rest of the stadium. Photo courtesy of the Los Angeles Dodgers

What better way to enjoy a summer night in LA than at Dodger Stadium?

Now the owners want it to get even better. Last week Dodgers president Stan Kasten announced a $100 million renovation.

“As a design, [Dodger Stadium] was a work of genius when it was created and it remains that way today,” Kasten said at a news conference.

Now the Dodgers will add a new plaza in center field and elevators and bridges that will connect the outfield pavilions to the rest of the stadium. There’ll be a two-acre entertainment plaza, with a craft beer garden and a kid’s field. And none of this, said Kasten, will alter the view.

“That view of those bleachers, those palm trees, those San Gabriel Mountains that is iconic, timeless and unmatched anywhere in the world in sports, and I am very proud to tell you we’re going to do all of the things I described without changing that look at all.” 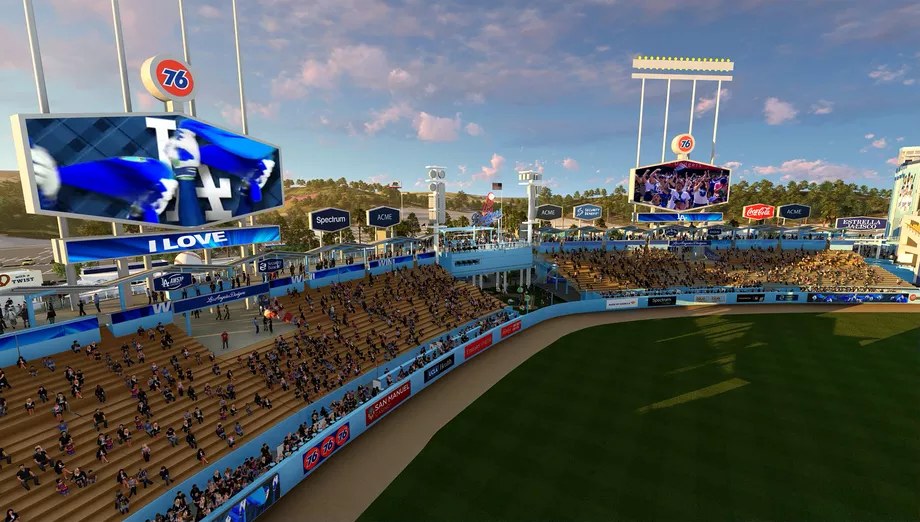 Space for standing and viewing will be added to the top of the outfield seating areas. Photo courtesy of the Los Angeles Dodgers

Dodger Stadium is now the 3rd oldest baseball stadium in the country. And it is making changes to keep up with the needs of fans and with LA itself.

“We will be creating the first front door ever for Dodger Stadium,” said Janet Marie Smith, senior vice president of planning and development for the LA Dodgers. “We’ll renovate this 1962 ballpark in a way that brings it up to current standards without changing its postcard view.” 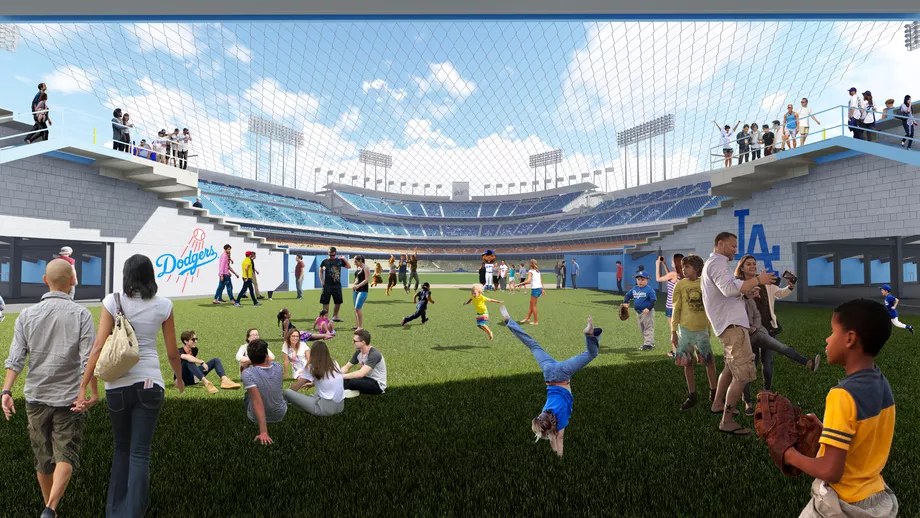 Smith will work with the same design team that made improvements to the stadium after Guggenheim Partners took over the team a few years back, including architect Brenda Levin and landscape architect Mia Lehrer.

“Our goal with this project is to give the ability for any fan to enter any gate and be able to safely and conveniently navigate via elevators, escalators, stairs and bridges to their location. And this center field plaza really becomes the foyer for all of that,” Smith said.

That includes improved pedestrian and cyclist access, as well as a proposed gondola connecting the stadium to Union Station. 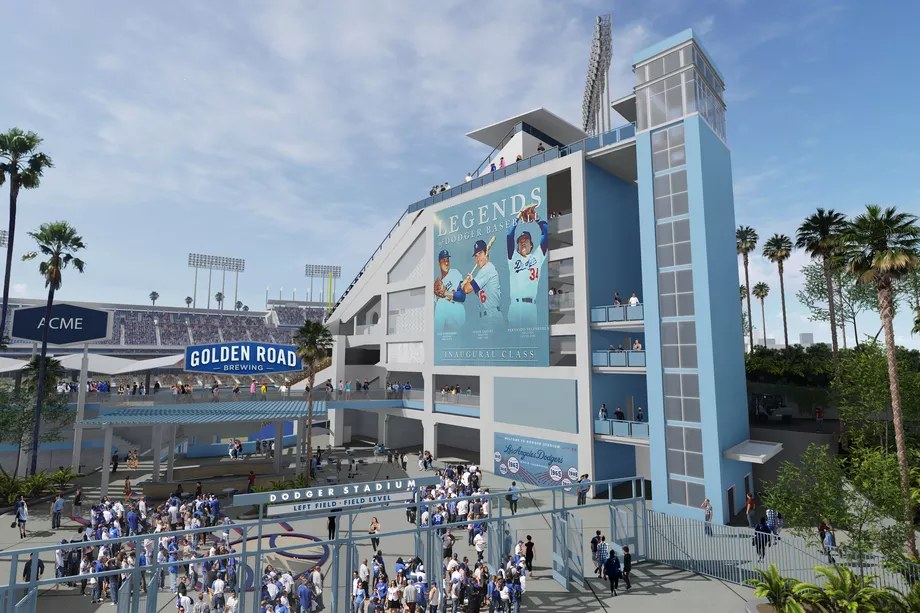 Elevators added in the renovation will improve access to the stadium for fans with mobility issues. Photo courtesy of the Los Angeles Dodgers

Smith got her start when she lead the retrofit of Oriole Park at Camden Yards in Baltimore, which created a national trend for retro-feeling “urban” ballparks.

“I was interested in the idea that baseball could move into downtown and be a part of the urban renaissance,” Smith said. “And fortunately the man that I wanted to go to work for, Larry Lucchino, had this vision that was born not only of the same kind of urban attitude but was rooted in a goal toward returning baseball to its roots, to get baseball out of the multi-purpose shared-with-football-era and into parks that were more akin to Wrigley, Fenway, Ebbets Field -- those parks that were more intimate and more unique and celebrated the fact that baseball doesn't have required outfield dimensions and that every one is different.”

The stadium’s renovations are expected to be completed in time for next season.

As Smith mentioned, baseball stadiums have evolved in recent decades.

And the story of that evolution is told in the book “Ballpark: Baseball in the American City” by longtime architecture critic Paul Goldberger. 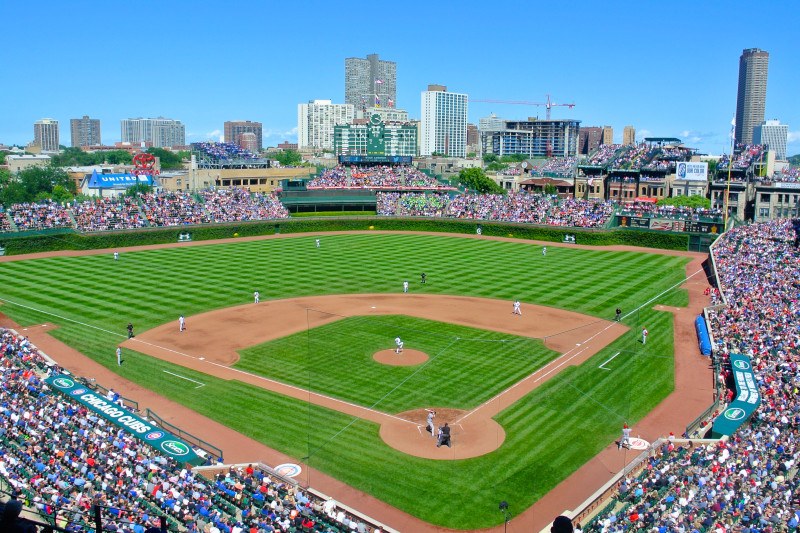 “Baseball effectively tracks American urbanism, which no other sport really does,” Goldberger said.

Goldberger identifies four waves of evolution. In the early years of baseball, he argues the sport “emerges out of the city, and ballparks are very deeply connected to neighborhoods and their growth in the whole urban fabric.”

Later in the mid-20th century, stadiums “became these big suburban concrete doughnuts surrounded by acres of parking which reflects the whole movement to the suburbs of older cities.” 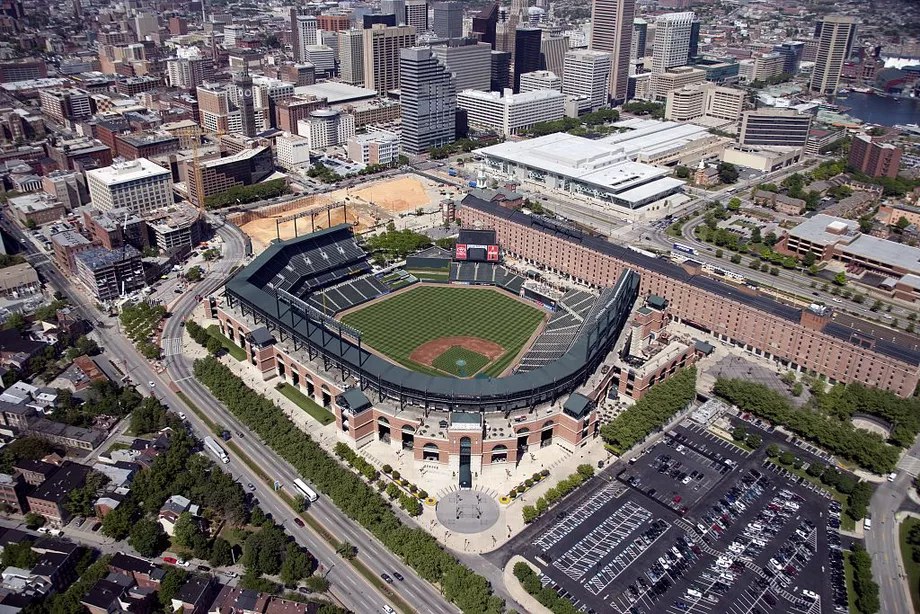 Camden Yards, which opened in Baltimore in 1992, is recognized as an innovative development in the design of ballparks. Photo credit: Carol Highsmith/Library of Congress

A third wave began with the Camden Yards ballpark in Baltimore. A redesign in 1992 attempted to reconnect the stadium to the city, “which also mirrors the return to the cities that we've seen in so many cities in the last couple of decades.”

Goldberger says we’re in a fourth phase now, “which is the attempt by the owners of teams to control the world outside their gates and to build entertainment zones around the ballparks,” whch he calls a “theme park version of a city.”

This can be seen at the Atlanta Braves’ new ballpark that opened in 2017. The team’s owners “built this entire complex in Cobb County outside of Atlanta that is a mix of bars, restaurants, even condos, a hotel, an office building, and a piazza -- a sort of pretend city on a street.” 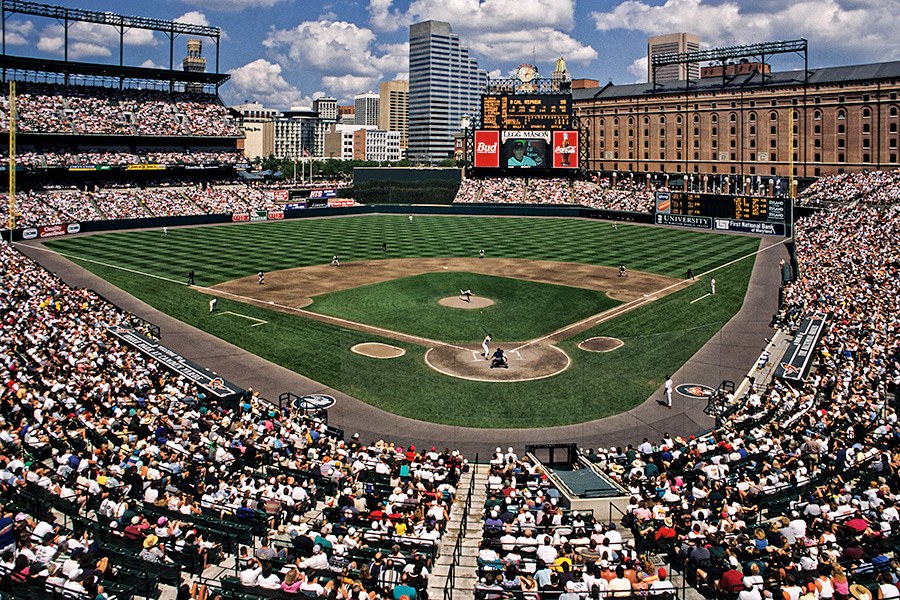 Goldberger acknowledges that he’s not a baseball know-it-all. But his own passion in the subject came from his first experience at a Major League Baseball game. His father took him to Yankee Stadium when he was a little boy.

“I had never seen a lawn like this one. It was so bright, so beautiful, so dazzlingly green and perfect and the fact that you reached it by going through an urban environment and then into this enormous, huge, monumental, urban building and then you went through a tunnel and poof, suddenly magically there was this bright emerald green place. So it was as if you'd suddenly gone into the Garden of Eden,” he said. “And I think that's really part of the idea of baseball is this you know rus in urbe, to use the Latin phrase, the combination of rural and urban butting up against each other which you have in no other sport really.” 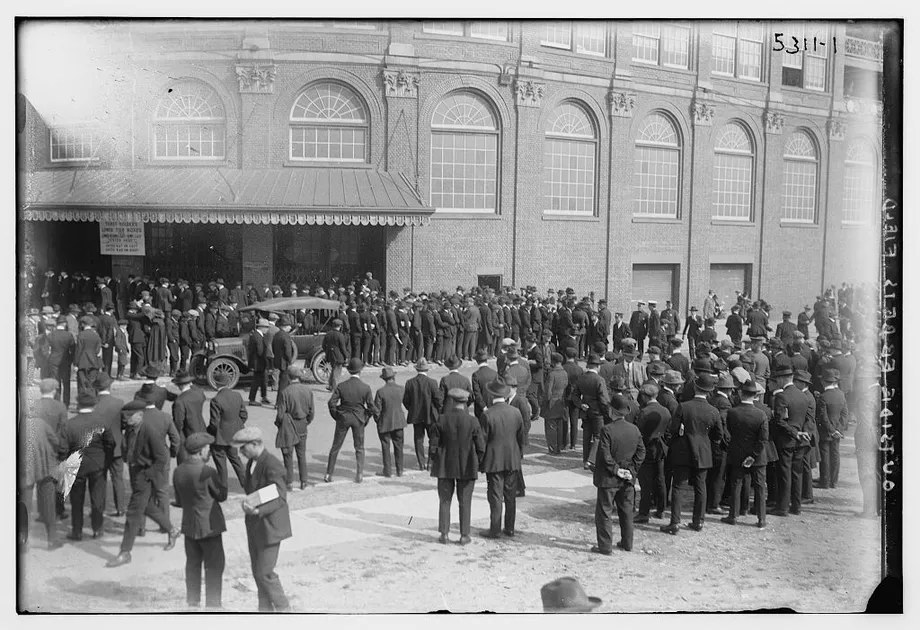 Fans waiting outside Ebbets Field in 1920, which Dodgers owner Walter O'Malley, the former owner of the Dodgers, sold the stadium in 1956. Photo courtesy Library of Congress

Goldberger also describes the move of the Dodgers from Brooklyn to Los Angeles. Walter O'Malley, the former owner of the Dodgers, wanted to make improvements to Ebbets Field, which he viewed as “dirty, decrepit and all round awful and inaccessible from his increasingly suburban fan base.” O’Malley hired designer Norman Bel Geddes to come up with an improved model.

Bel Geddes’ design, “a domed stadium that would have also included a multiplex cinema, a shopping mall and underground parking... was sort of every dream of the 1950s all put into one building.”

The dream was never realized, and O'Malley moved the team to Los Angeles, at a site in Chavez Ravine that had been home to a Latino community. Those residents had been moved to make way for a huge housing project by Richard Neutra that was never built. 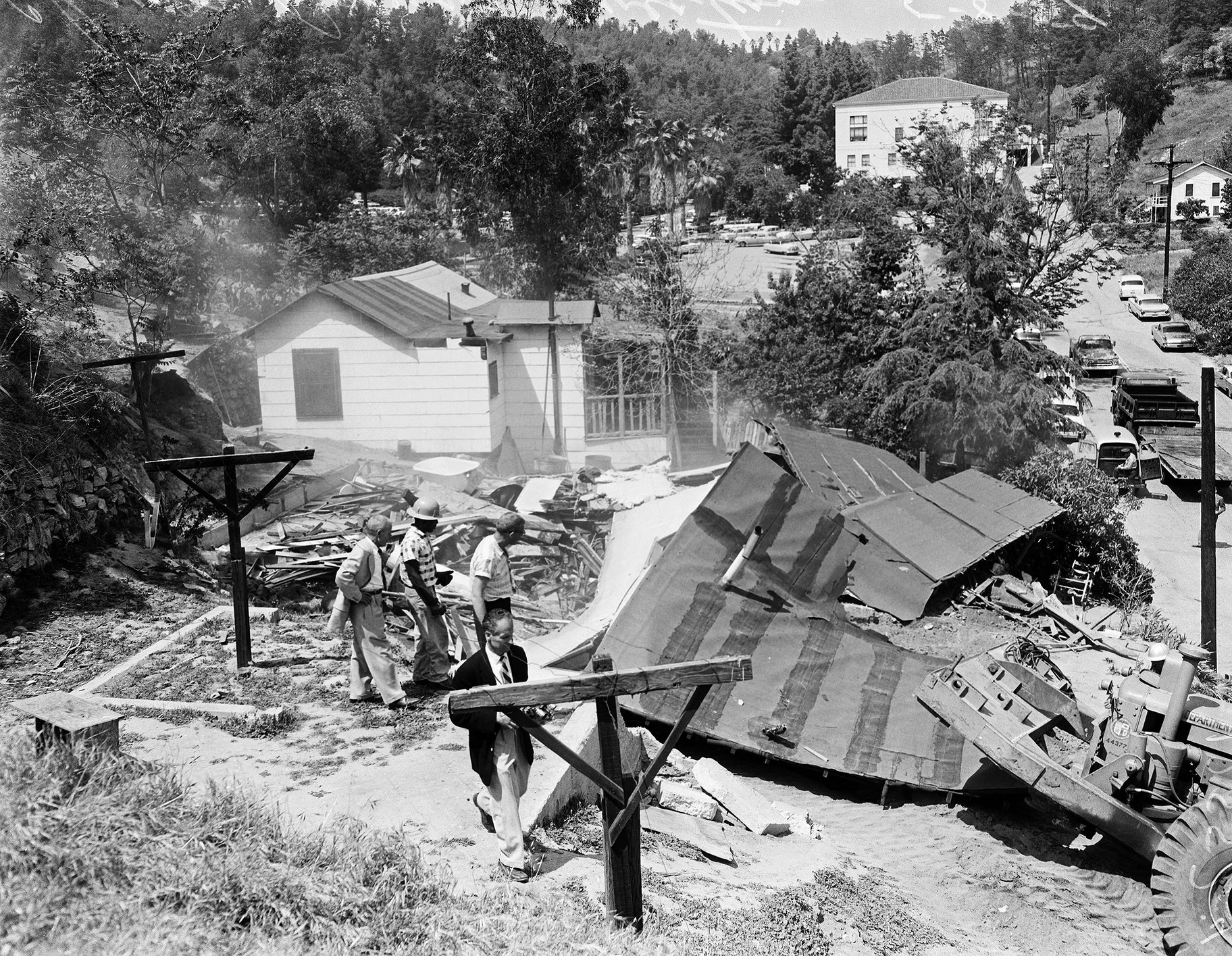 However, the stadium “was built with no integration whatsoever to surrounding neighborhoods... They're trying very hard to fix that now but of course it's a lot harder now than it would have been back then. It's a funny place because it is absolute hell to get to and to get out of. But, it's pure joy when you're actually in it,” Goldberger said.

What better way to enjoy a summer night in LA than at Dodger Stadium? Now the owners want it to get even better. Last week Dodgers president Stan Kasten announced a...

One year ago the DnA team visited the construction site of an accessory dwelling unit, or ADU, in Highland Park.