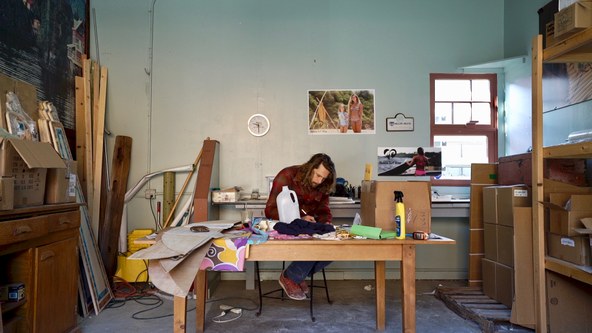 30-year-old Ryan Lovelace at his studio along Haley Street in Santa Barbara.
He shapes all his boards by hand rather than machine.
Paul Mathieu/West Beach Films

Santa Barbara isn't a big city, but it's played an out-sized role in the development of the surfboard industry. Since the 1960s, Santa Barbarans have created some of the most iconic boards, experimented with different building techniques and used new technology to streamline their craft. And the city continues to be a hub of surf innovation.

The Surf Shapers from West Beach Films on Vimeo.

A rendering of the "Freedom Sculpture" designed by Cecil Balmond Courtesy of Farhang Foundation A new public artwork will be unveiled at a public festival this Fourth of...

Tom Schnabel (L), with Frances Anderton and Henry Rollins Photo by Camellia Tse Henry Rollins is a long-time musician, host of a self-titled radio show on KCRW and an...

30-year-old Ryan Lovelace at his studio along Haley Street in Santa Barbara. He shapes all his boards by hand rather than machine.