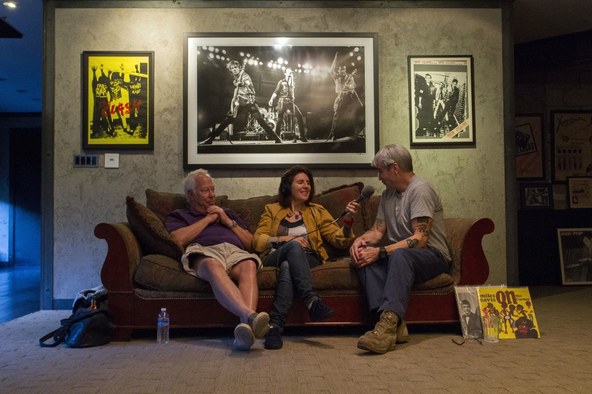 Henry Rollins is a long-time musician, host of a self-titled radio show on KCRW and an evangelical audiophile. He leads DnA's Frances Anderton and Rhythm Planet's Tom Schnabel on a sonic tour of his high fidelity audio-equipped home, and doesn't mince words about why we all should all own analog sound systems: "If you're going to listen to an MP3 -- which is sacrilegious -- through those ridiculous headphones through your phone, every band you're listening, you're sticking knives into their ribs, you are throwing them into the curb, and running them over with a truck."

A rendering of the "Freedom Sculpture" designed by Cecil Balmond Courtesy of Farhang Foundation A new public artwork will be unveiled at a public festival this Fourth of...

Tom Schnabel (L), with Frances Anderton and Henry Rollins Photo by Camellia Tse Henry Rollins is a long-time musician, host of a self-titled radio show on KCRW and an...

30-year-old Ryan Lovelace at his studio along Haley Street in Santa Barbara. He shapes all his boards by hand rather than machine.