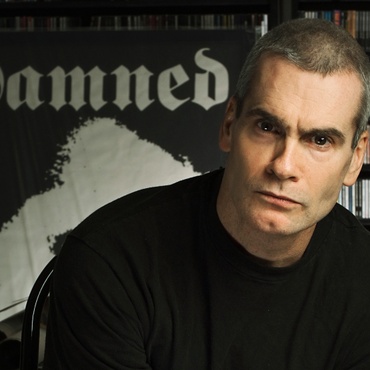 In describing Henry Rollins, the tendency is to try to squeeze as many labels as possible into a single sentence. "Rollins is many things," says the Washington Post, "diatribist, confessor, provocateur, humorist, even motivational speaker…his is an enthusiastic and engaging chatter." Entertainment Weekly's list includes "Punk-rock icon. Spoken word poet. Actor. Author. DJ. Is there anything this guy can't do?" TV Guide has more concisely called him a "Renaissance Man" – but if Henry Rollins could be reduced to a single word that word would undoubtedly be "workaholic."

For better than a quarter century, Rollins has toured the world as a spoken word artist, as front-man for both Rollins Band and Black Flag and – without a microphone – as a solitary traveler with insatiable curiosity bypassing the resorts in favor of places like Siberia, Senegal, Burma and Bangladesh.

When he's not living out of a backpack, Rollins is constantly at work as an actor, radio DJ, author of more than 25 books, and running his publishing company and record label 2.13.61. Henry currently hosts a weekly radio show on LA's renowned NPR affiliate KCRW, is a regular columnist for LA Weekly and Rolling Stone Australia. In recent years has hosted several TV shows for National Geographic, including 2012's three-part series Animal Underworld with Henry Rollins. Fanatic! We’re doing it again! It’s our Case Of The Punks show! Look below, it’s a lot of tunes. I don’t think we did one of these last year. Hang in there and STAY FANATIC!!! It’s probably hot where you are. Stay safe! Keep the music on, stay healthy and STAY FANATIC!!!

Austin, TX band, Nané, have an indie-soul sound and big energy behind vocalist Daniel Sahad’s dynamic range. They are an artist to watch on NPR's Tiny Desk Contest.

Glenn Zaleski’s beautiful new album The Question features deeply personal compositions, written on the verge of new fatherhood as he meditated on this transitional moment in life. Peter CottonTale is a Grammy Award-winning producer and Chance the Rapper collaborator, who provides timely and uplifting songs on his debut album “CATCH . Hailing from Los Angeles, 18-year-old Angela Muñoz teams up with mentor and producer Adrian Younge for an intriguing and hypnotic sound on ‘I Don’t Care.’ Margo Price: ‘Letting Me Down’ Georgina and Una McGeough are Irish twin-sisters who make up Song Sung. There’s a buzz around 20-year-old artist Spencer. Less than a year after dropping out of college, Spencer., racked up over a million streams on Spotify with just a couple of songs.