Autonomous cars will bring a utopian future: an end to car collisions, no need for parking lots, smooth-flowing less congested streets. But even as cities embrace those possibilities, they fear the loss of revenue -- from cars!

The City of Santa Monica, famed for its commitment to sustainability, its bike lanes, parks and public transit, turns out to be as dependent as any other municipality on the human-driven car economy: sales tax from car sales in the city’s many dealerships, revenue from parking lots and garages, and from parking tickets and driving infractions.

It is not only autonomous cars that are causing anxieties. Consider also the transformation in brick and mortar retail; the rise of online shopping is sapping street life and eating into sales taxes.

All of this has the city’s director of Housing and Economic Development, Andy Agle, thinking ahead to how Santa Monica will continue to support its housing, schools, public transit and numerous other civic services.

Tech, he says, is bringing “an Age of Disruption. So many of the elements of what we think the economy is about are undergoing pretty significant shifts and we want to take some time to think about how do we prepare for that economy.”

Agle has assembled a group of leading thinkers for a forum on Disruption and the Economy. It will be live-streamed here. 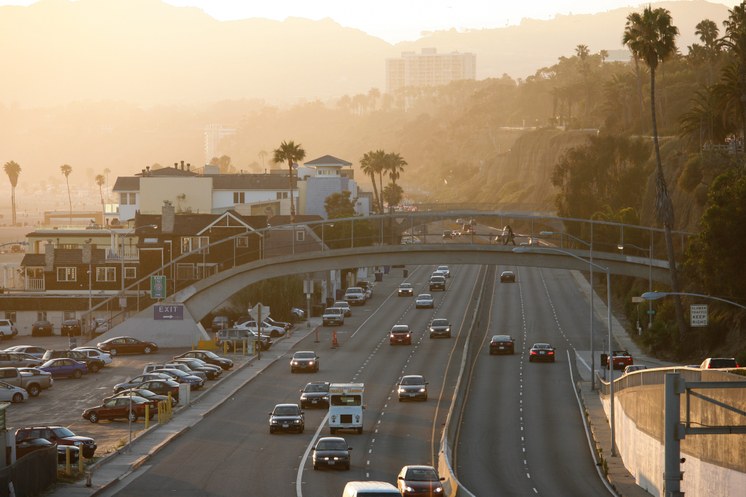 Traffic in Santa Monica. The city derives much of its revenue from auto-related sources. Photo credit: Alex Proimos.

Fashion designer and retail icon Kate Spade was found dead at her Manhattan apartment today. The cause of death was an apparent suicide. She was 55 years old.

Autonomous cars will bring a utopian future: an end to car collisions, no need for parking lots, smooth-flowing less congested streets. But even as cities embrace those...