Marciano Art Foundation and the value of ‘art labor’ Protesters outside Marciano Art Foundation on Friday, Nov. 8. The fired workers want the museum to recognize their union drive. Photo by Avishay Artsy/KCRW

Dozens of fired museum employees and their supporters rallied last Friday outside the Marciano Art Foundation, the now-closed arts institution in a former Scottish Rite Masonic Temple on Wilshire Boulevard.

Opening just two and a half years ago, Marciano Art Foundation management cited low attendance as its reasoning for closing its collection to the general public.  It shut just days after its visitor services associates, or VSAs, publicly announced their intent to unionize.

Sixty of Marciano’s employees had voted to join the American Federation of State, County and Municipal Employee (AFSCME) union.

MAF was founded by the Marciano brothers, Paul and Maurice, who made a fortune with their clothing company Guess. The Millard Sheets-designed building was remodeled by Kulapat Yantrasast; it voluminous space has held shows by Ai Weiwei, Olafur Eliasson and Donna Huanca.

Since their firing, workers have filed a charge with the National Labor Relations Board, on the grounds of illegal discrimination.

DnA met with organizers at a protest outside MAF Friday and spoke with them about their reasons for unionizing, and about “art labor” at a time when contemporary art is a booming cultural and financial asset. 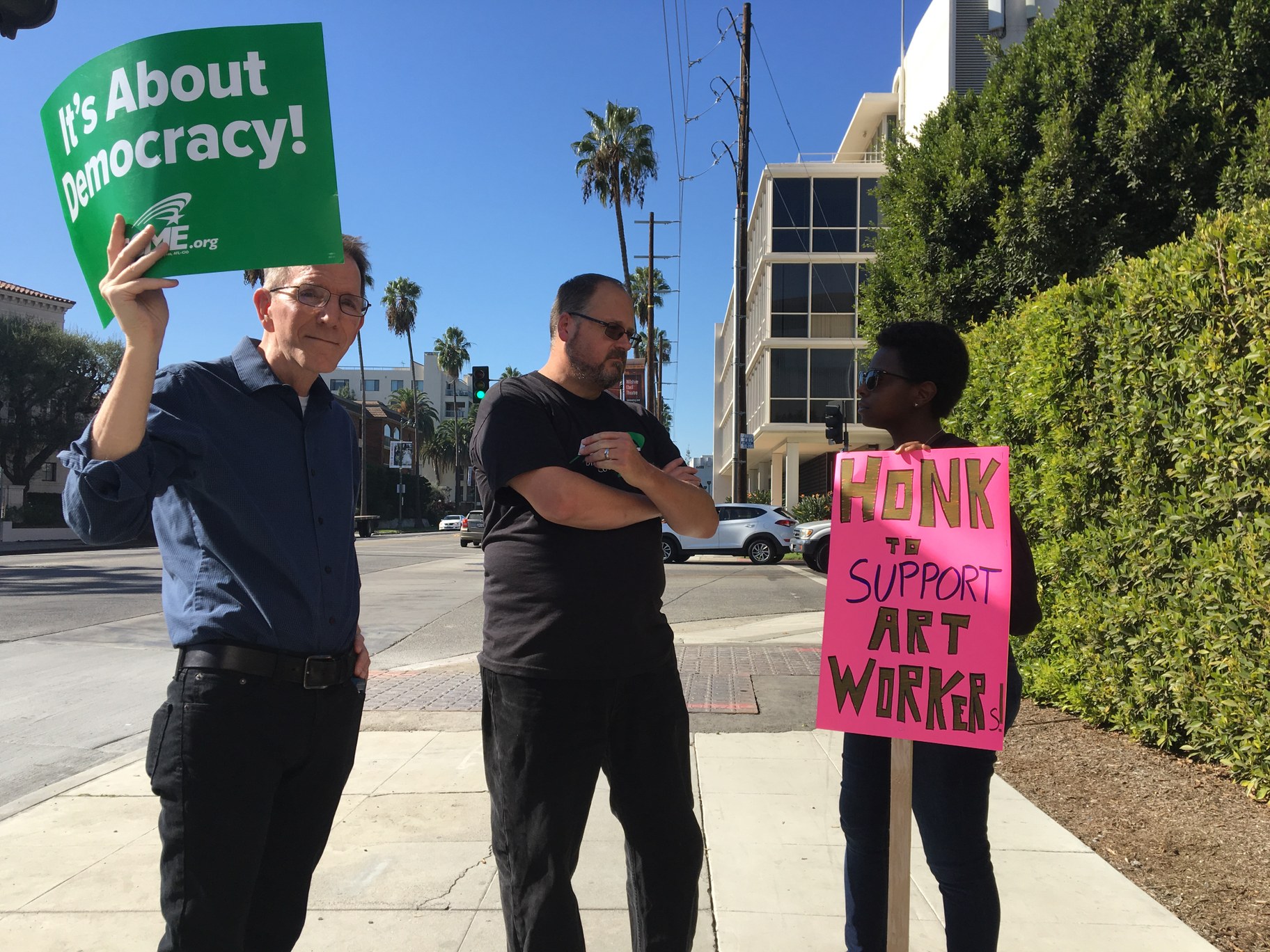 Eli Petzold, a VSA who helped organize the union, says he wants art institutions to invest and to appreciate the everyday labor employees put into their work.

“We want to have a union ultimately because we believe that our work has dignity. Our work involves, yes, preventing children from touching the art or stuff like that. But most of our job is actually engaging with visitors about the arts. It's a job that requires either formal education or just a knack for communication or experience as an educator. It requires a huge mix of talents and abilities. And we ultimately don't believe that it's minimum wage labor, which is what are our wage is,” Petzold said. 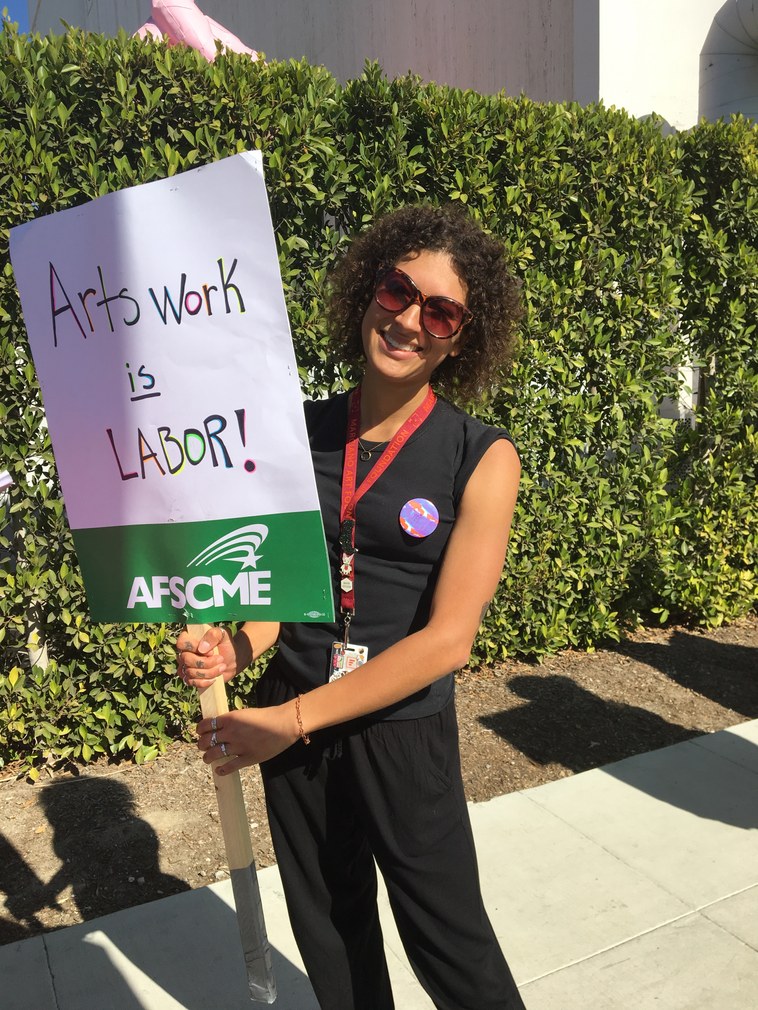 The Marciano Foundation joined an exploding crop of private art museums that were founded this century. In Los Angeles it joined the Broad and the now-closed Main Museum.

In opening the museum, the Marciano brothers also got a tax exemption.

“In the case of the Marciano, that would be showing the art collection, running education programs, hosting school groups, all of that are the sorts of programming activities that they can seek tax exemption in order to do,” explained Carolina Miranda of the LA Times. “Another model might have been the early Broad Foundation when they were a lending library of art for Eli Broad's collection.”

DnA reached out to the Foundation and we received the following statement: “Due to low attendance the past few weeks Marciano Art Foundation will be closing the current exhibitions early on November 6 after a 5 month run. We have no present plans to reopen.” 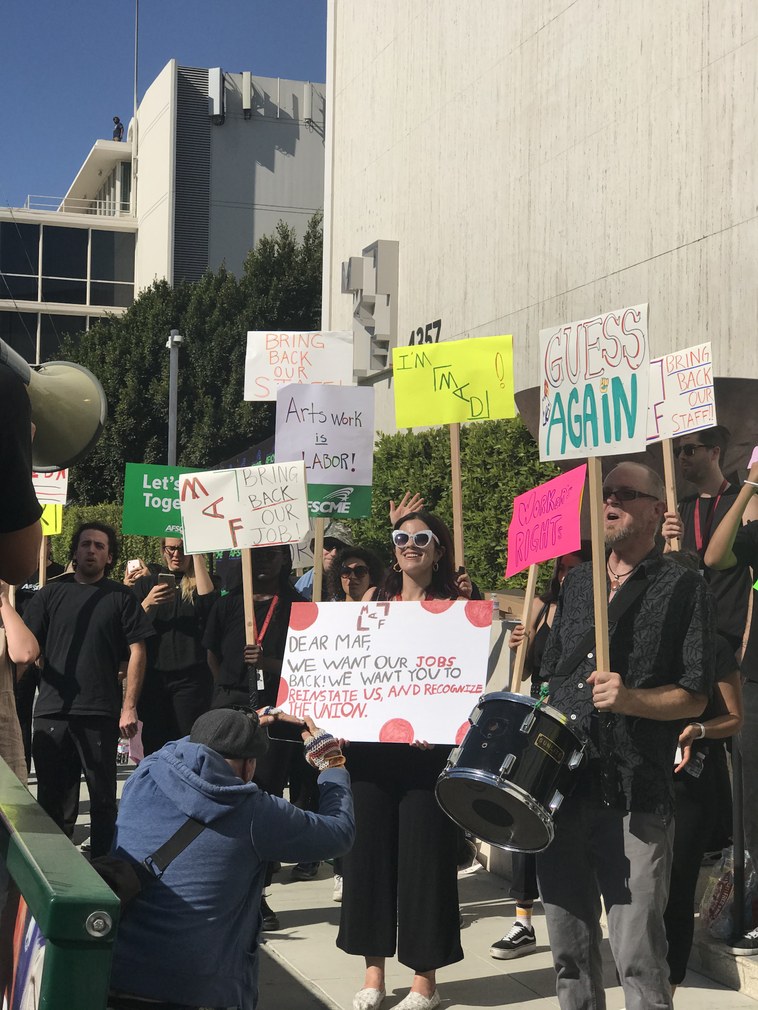 The Marciano brothers have pushed back against unions in the past. Over 20 years ago they moved jeans production out of Los Angeles to cut costs, dogged by allegations of illegal labor practices.

But this organizing drive at the Marciano Art Foundation also comes hot on the heels of unions being formed at other museums: the New Museum, Tenement Museum and the Guggenheim in Manhattan, and the Frye Art Museum in Seattle.

The issues that the VSAs are fighting about are “endemic to the art world,” said organizer Izzy Johnson.

“I think that arts labor is really viewed as the sort of privileged sector of labor that, you know, people who are working in the arts often have college degrees or postgraduate degrees, and that somehow this is not our main source of income or is not our livelihood or is in some way that we are not serious workers,” Johnson said. “I hope that this is sparking a larger conversation in Los Angeles about the nature of arts labor and how it should be fairly compensated and respected.” 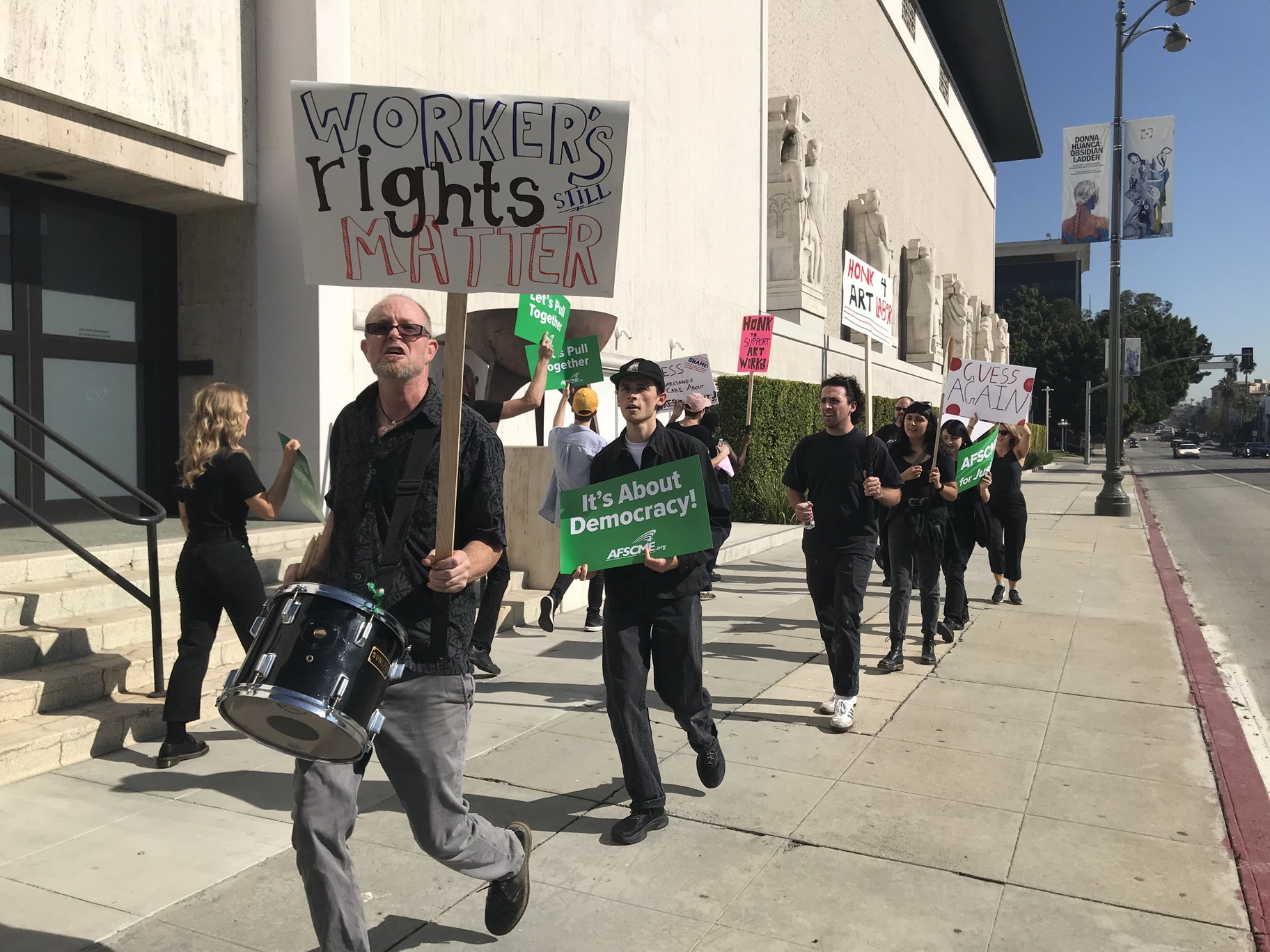 A protester who identified himself as “Jerry the Priest” led a line of marchers on Wilshire Boulevard. Photo by Frances Anderton/KCRW

So far LA museums have not unionized, with the exception of the Museum of Tolerance. Their union, AFSCME, provided support to the organizers at Marciano Art Foundation and stand ready to help other museum staffs.

Johnson says that low pay is only part of the issue. Arts workers in LA are also dealing with high costs for housing and health care, as well as student debt.

Museums offer unpaid internships, “where you're essentially free labor for any institution,” Johnson said. “And it's like, how are you supposed to pay rent? How are you supposed to be able to live? You have to pay for food, that sort of thing, while you're getting this experience but not being compensated for it. So, yes, I think that it is a much larger conversation that needs to be held also in academic institutions going forward from here.”

Marciano Art Foundation and the value of ‘art labor’

Dozens of fired museum employees and their supporters rallied last Friday outside the Marciano Art Foundation, the now-closed arts institution in a former Scottish Rite...

Shortlisted! The role of localism in design commissions

Last week LACMA director Michael Govan and his supporters went before an LA city council committee to ask for the air rights over a portion of Wilshire Boulevard to be...