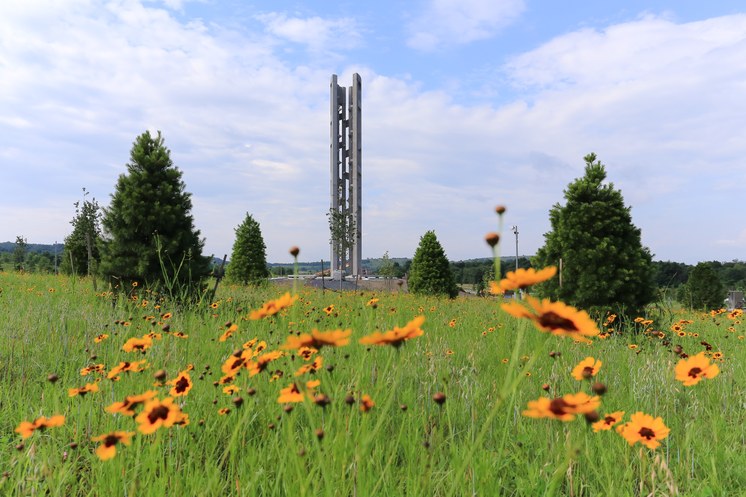 A view of Tower of Voices, marking the entrance to the Flight 93 National Memorial national park. Image courtesy of NPS Photo.

Today marks seventeen years since the terrorist attacks of September 11, 2001.

On that day, 40 passengers and crew members of United Flight 93 lost their lives. They fought against the hijackers who wanted to fly the plane into the US Capitol.

The National Park Service held an architectural competition in 2005 to create a national memorial in Pennsylvania where the plane crashed.

LA architect Paul Murdoch and his team were picked from more than a thousand competitors, and have since worked with the Park Service and the families of the bereaved to create a memorial and park over 2,200 acres of grounds that were previously mined for coal.

The final addition is Tower of Voices, a sonic gateway to the memorial complex. It is a 93-foot tall concrete tower set among a ring of trees, from which hang 40 large metal wind chimes.

“The idea for the piece is that it's a living memorial in sound,” says Murdoch. “A lot of the last memories of people on the plane were through their voices on phone calls. So we wanted to have something and sound as part of the memorial.”

A dedication ceremony was held this Sunday for this new addition, which has proven a complex challenge in terms of the sound and physical design.

Murdoch worked with a sound artist who specialized in chimes and a musician and tuning theorist on simulating the haunting, melancholy music that would be created by the movement of wind through 40 aluminum tubes of differing lengths.

“When we talked I said, you know, this is not a composed piece. This is always going to be changing. And initially we talked about there being kind of a harmony of these 40 sounds but also some dissonance because of what happened that day.”

Eight of the chimes have been installed with another 32 still to be added.

Scott Gillen takes pride in his New Castle in Malibu. Photo by Frances Anderton. In the very time that residential space in L.A. is being designed smaller, down to the...

A view of Tower of Voices, marking the entrance to the Flight 93 National Memorial national park. Image courtesy of NPS Photo. Today marks seventeen years since the...