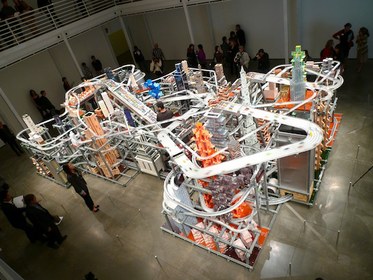 Urban Light, a grove of ornate, historic lampposts at the entrance to the Los Angeles County Museum of Art, has become a much-loved landmark, and a gentle evocation of the Southland’s past. Now the same artist, Chris Burden, has created a new interpretation of Los Angeles, that’s the opposite of a stroll down a Victorian street. Burden, known for his performance and installation work, has created a kinetic sculpture named Metropolis II, a room-size imaginary city, with multi-level freeways and rail lines looping around cheerful skyscrapers. It’s made of Plexiglas, glass and stone tile and children’s building materials: Lincoln Logs, Erector Sets, and Haba wooden blocks. It's also a feat of engineering, involving years of experimentation by a team of artists and lead engineer Zack Cook.

The result is a delight, an artwork that’s instantly accessible, and appeals to the kid in all of us. But it’s meant to do more that. Burden says the sculpture is meant to evoke an LA of the future, where self-driving cars zip along at 200 miles per hour and one could drive from Pasadena to Santa Monica in a handful of minutes. Thomas Crow, professor of modern art at New York University, comments on this clattering, whirring vision of the future, especially in comparison to the peaceful Urban Light. And LACMA's director Michael Govan speaks about why Burden's interpretation of the city was the perfect addition to LACMA's collection. But could Burden's vision really be a glimpse into LA's future? Frances asks Dan Neil, auto critic for the Wall Street Journal, for his take on whether or not Metropolis II could eventually be a reality. 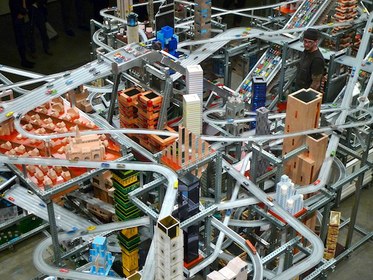 The sculpture is so complex an operator must stand at the center while it's running to make sure nothing goes awry. Photo by Alissa Walker 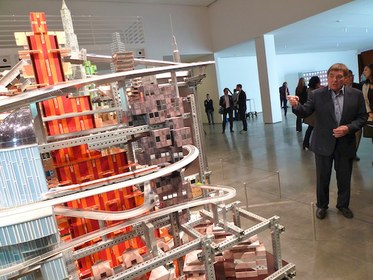 Chris Burden points out some structural features at one corner of the sculpture. Photo by Alissa Walker

Metropolis II: The City in Art

Urban Light, a grove of ornate, historic lampposts at the entrance to the Los Angeles County Museum of Art , has become a much-loved landmark, and a gentle evocation of the...

We're midway through the art world marathon that is  Pacific Standard Time , with several shows closing and new ones about to open.

Blurring Boundaries Between Art and Architecture

On January 31 Frances will be hosting a conversation called " Temporary Insanity! " at LACMA with Jenna Didier, co-founder of design laboratory Materials and Applications ....