After it opened in 1989, Santa Monica’s Third Street Promenade became one of the most popular shopping destinations in the world. The three-block stretch was closed to cars, and visitors flocked to its stores, movie theaters, restaurants and street performers.

“The promenade as it evolved in the 1990s became this incredible case study of urban renaissance that cities from around the country came to Santa Monica to try and learn from Santa Monica, improve upon it, and what they took away was... movies, dining, shopping as the kind of formula to create vibrant public spaces. And if you think about those, those are all places of consumption,” said Alan Loomis, urban designer for the city of Santa Monica. 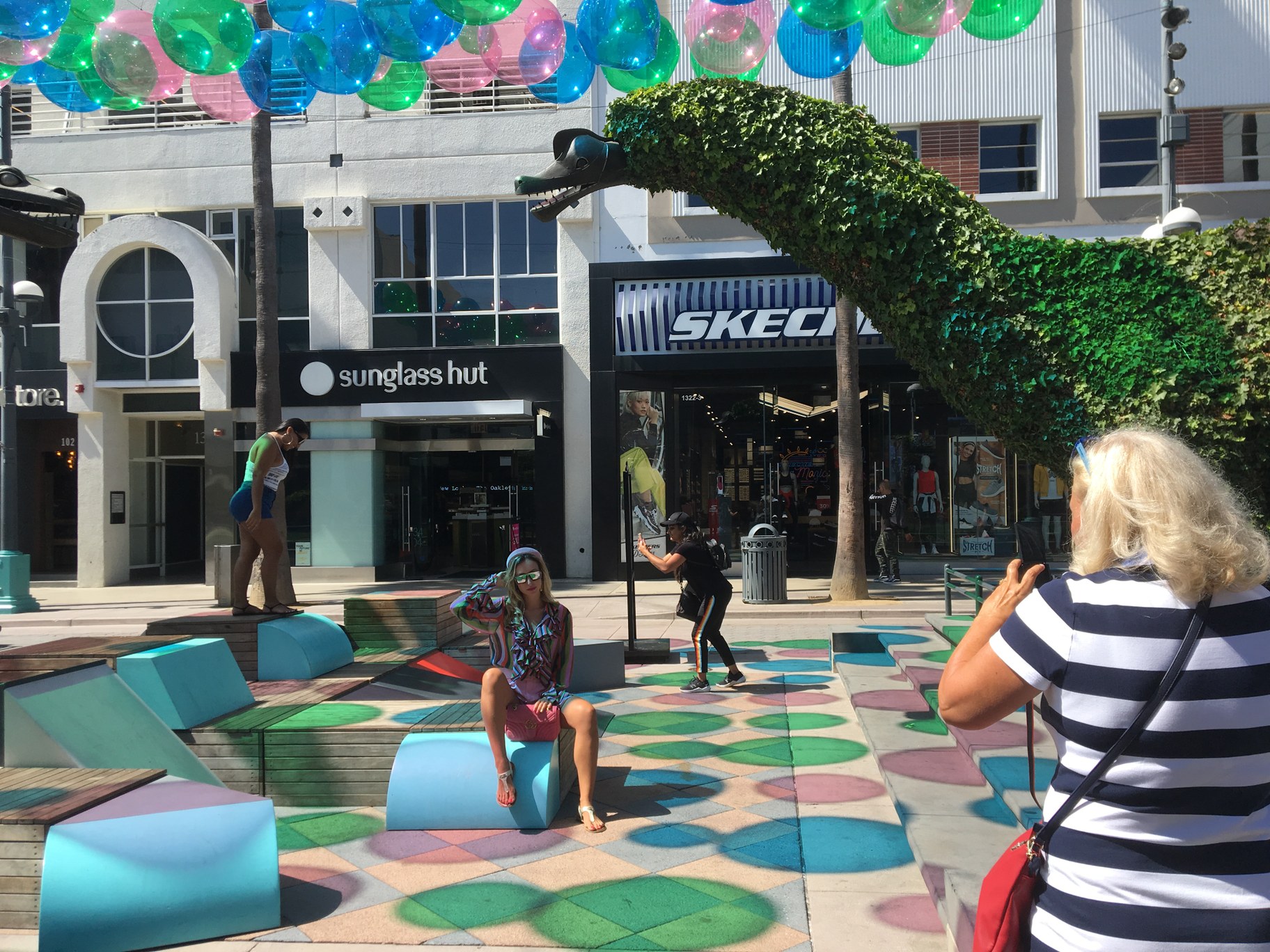 A young woman poses under the canopy of brightly-colored beach balls at the north end of Third Street Promenade. Photo by Avishay Artsy/KCRW

But around three years ago stores started closing.

“That’s probably about when we started to notice an increase in the number of vacancies on the street as our property owners struggled to find tenants who were willing to make the level of investment that it takes, that the economics on the promenade can be tough for a store to make it,” said Steven Welliver, Deputy Chief Executive of Downtown Santa Monica, Inc., , the nonprofit that manages the business heart of the beach city.

The 2018 departure of Barnes & Noble, the anchor store on the northernmost block, was wake-up call. Despite being close to the shore and surrounded by an affluent community around it, the promenade has been subject to some of the same stresses facing other retail streets and districts everywhere.

“As those three industries -- movies, dining and shopping -- have been turned upside down by the Internet era, we really have to rethink why people want to come to public space and what they're doing. And so I would say we're at a place in the 21st century where that formula is completely reversed,” Loomis added. 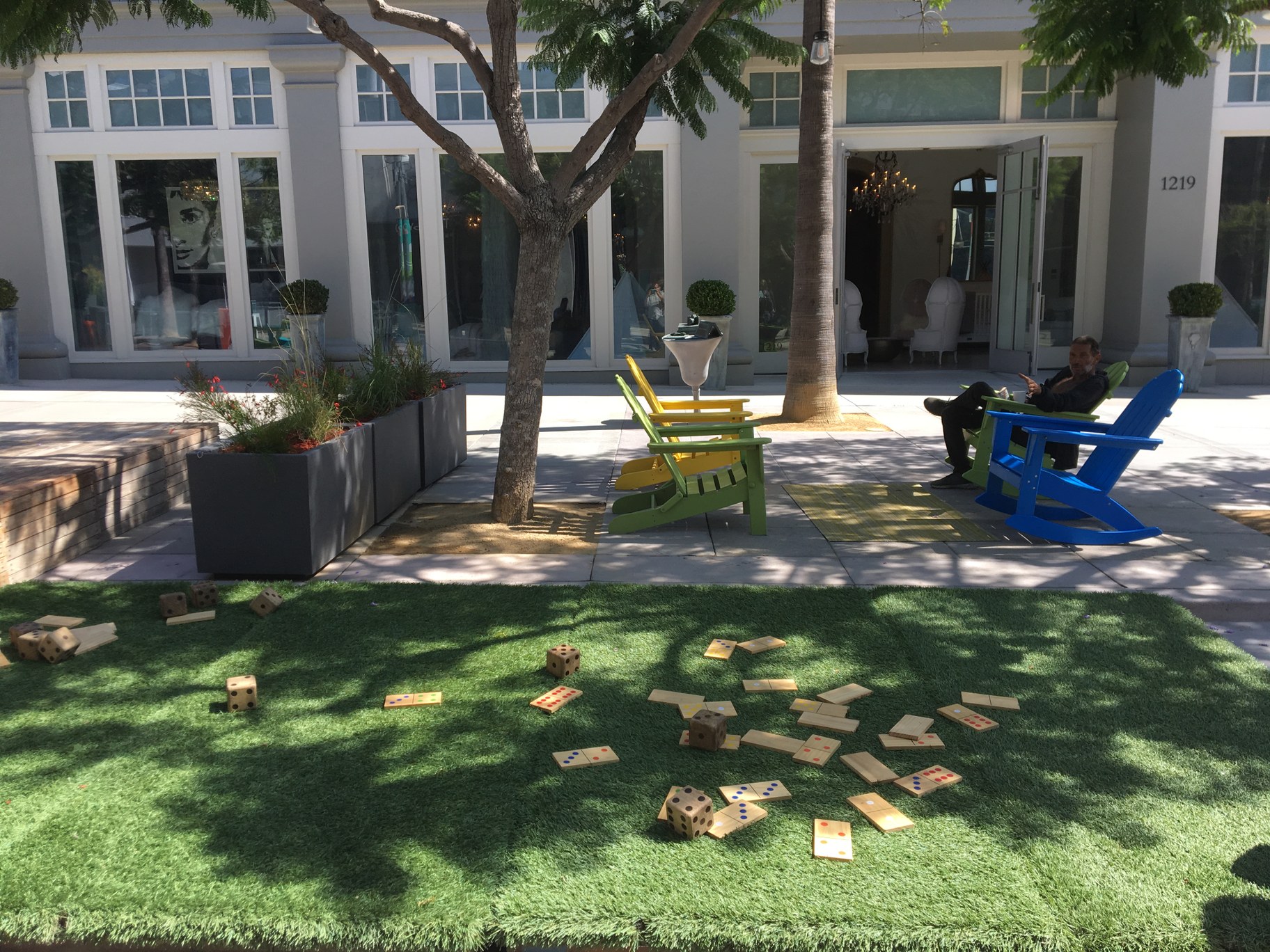 Oversized dice and dominoes, and some Adirondack-style rocking chairs, are part of an effort to lure visitors to the new promenade. Photo by Avishay Artsy/KCRW

These city business and design leaders teamed up with urban design firm Gehl People and Rios Clementi Hale Studios to embark on what they are calling Promenade 3.0. It’s what Kathleen Rawson, head of Downtown Santa Monica, Inc., calls “the next evolution of the downtown district.”

It began with The Experiment, whereby the designers have distributed a pot pourri of chairs, lawn games, boxes for climbing on, overhead decorations and an outdoor stage. The idea is test how people use these attractions and use the information as the basis for a redesign, to commence in the coming months. 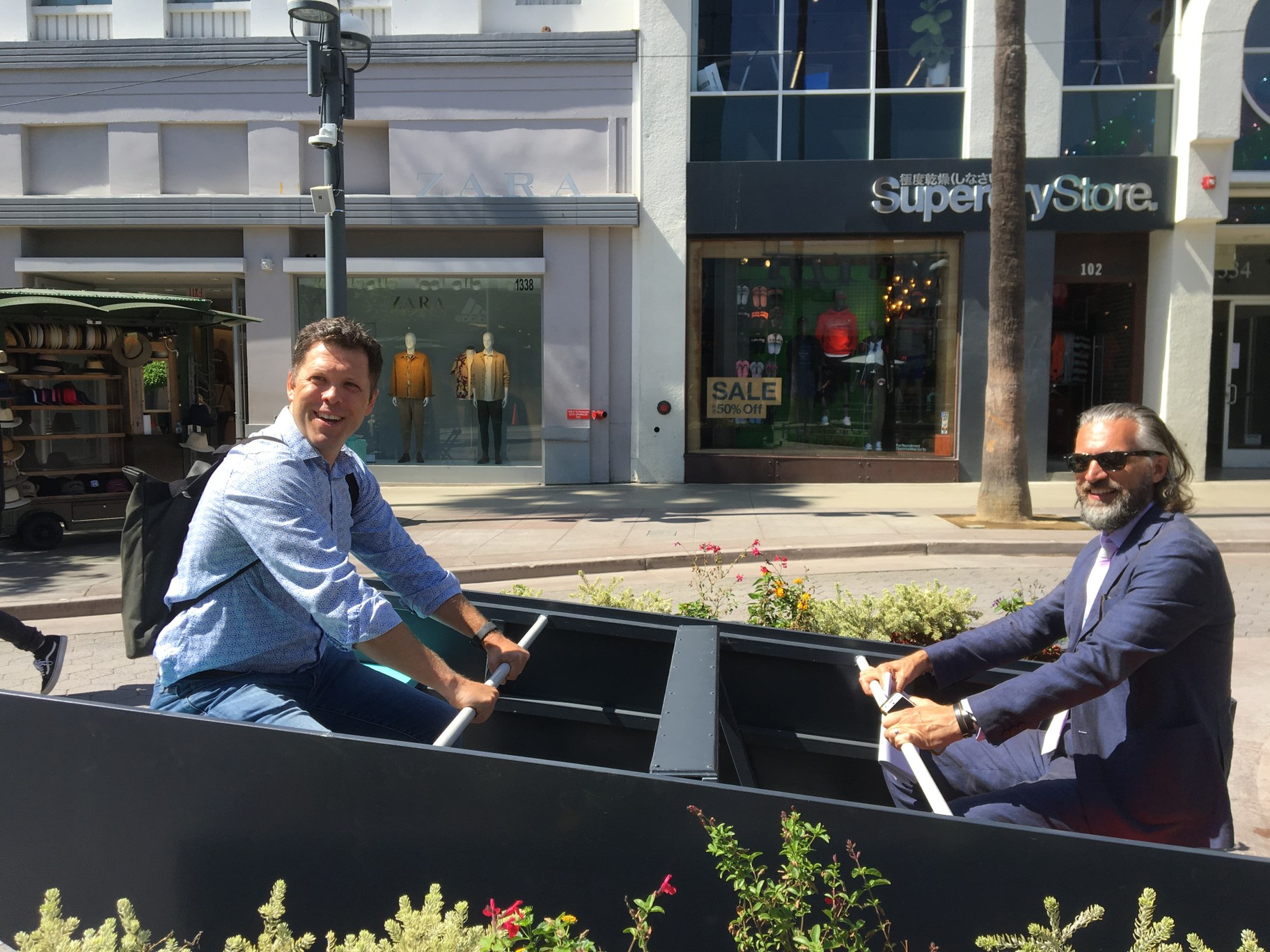 “With the changing retail environment, with the increased competition, and frankly the sort of boring retail that can happen in traditional malls, the evolution of the downtown area has to be more than just changing out who the tenants are,” Rawson said.

“We're looking at instilling a great deal more fun, a great deal more energy, a great deal more people gathering opportunities. Because as people do spend more time in their homes with their movies on Netflix and as we become more isolated as citizens, these public gathering spaces are crucially important. The more comfortable someone is on our street the longer they'll stay, the more they will make it their habit.” 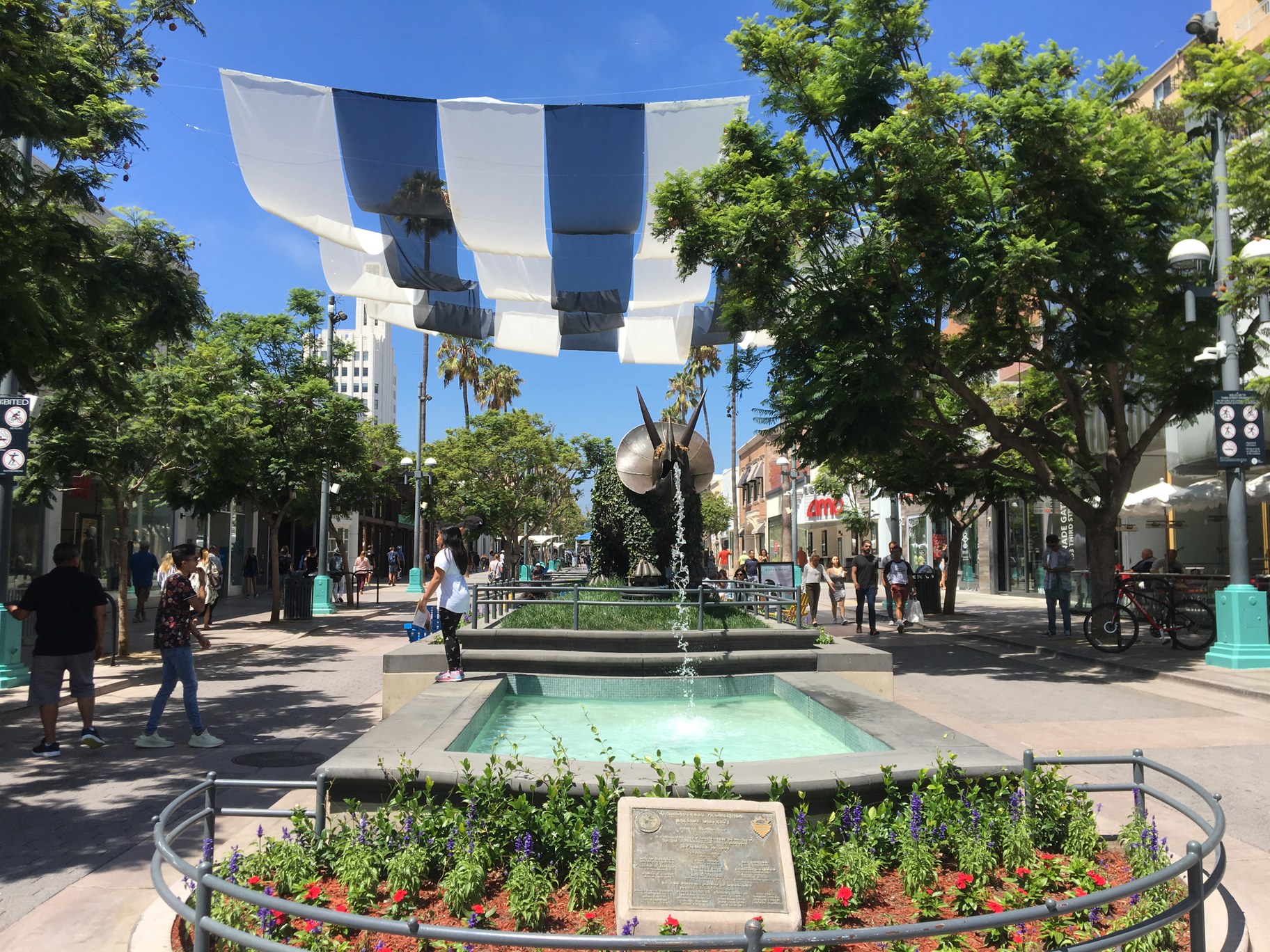 Will the topiary dinosaurs survive the redesign of Third Street Promenade? Or will they face extinction? The designers say their fate has yet to be decided. Photo by Avishay Artsy/KCRW

Among the changes that could come to the promenade are “using the alleyways as front facades” for new vendors, Rawson said. “It's a great place for those kinds of uses that wouldn't normally be able to afford the Third Street Promenade rents.”

Smaller store sizes are also being considered. Business district leaders are also “looking at the regulations that prevent property owners from developing the types of spaces that might support smaller, independent, unique retail experiences,” Welliver said. 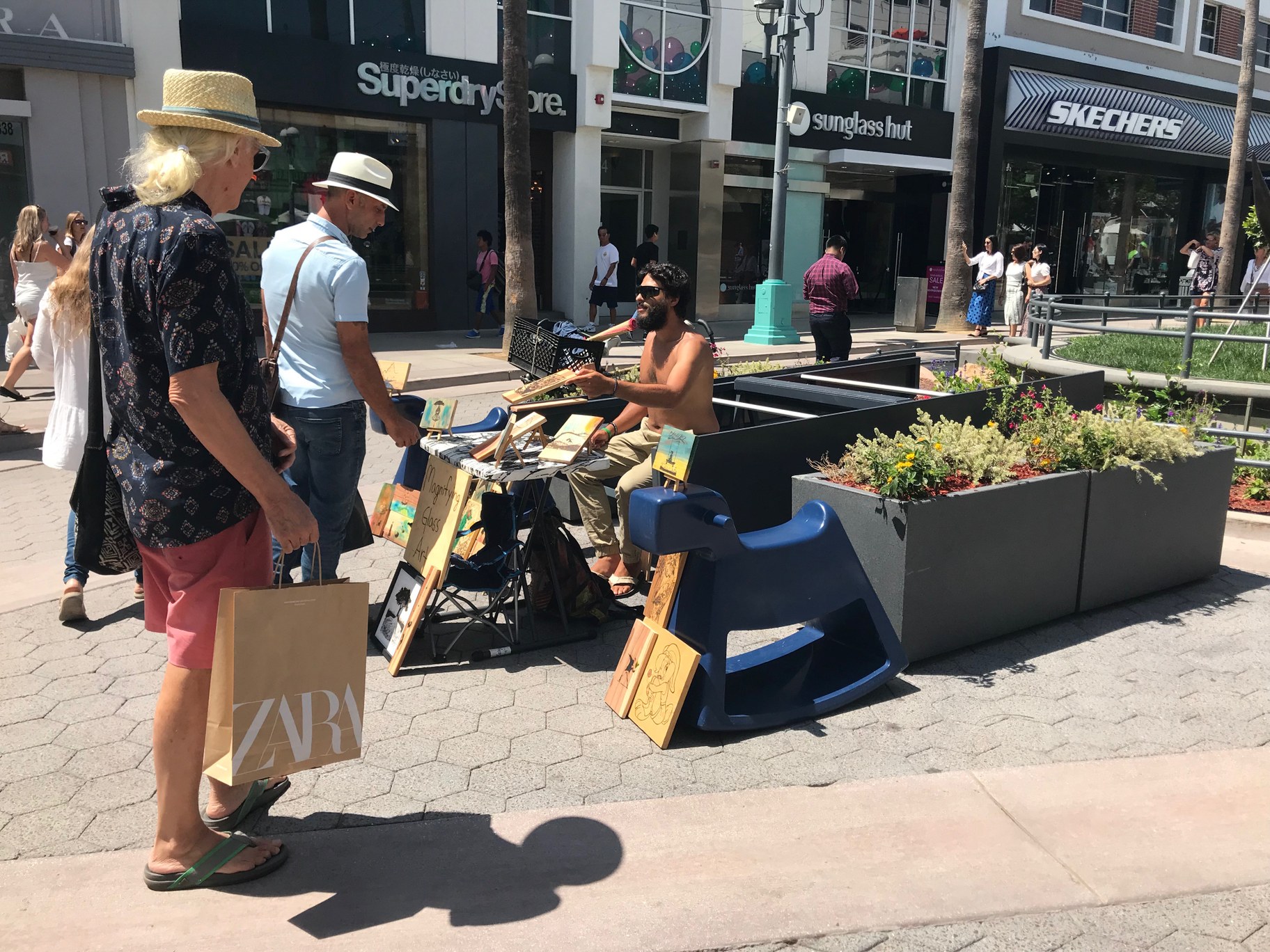 Street performer Andrew Acosta takes over the seesaw and rocking horses to sell his art. He uses a magnifying glass to burn images onto pieces of wood. Photo by Frances Anderton/KCRW

DnA walked around the promenade with these four to understand how lawn games, public seating and ‘Instagram moments’ can make the promenade a must-visit place once again.

This Saturday, some members of the design team will lead a tour of the promenade, explaining how Promenade 3.0 fits into today’s ideas about place-making and “tactical urbanism”. Find more details here.

After it opened in 1989, Santa Monica’s Third Street Promenade became one of the most popular shopping destinations in the world.