Ray Kappe instructing a class in the early days of SCI-Arc. Photo courtesy of SCI-Arc

A pillar of Los Angeles architecture, Ray Kappe, died on November 21 at age 92.

Kappe was the architect of numerous houses in the California Modernist tradition, including his own glorious home embedded in nature in Rustic Canyon. He created the radical architecture school SCI-Arc, influencing thousands of lives. He was concerned with environmentalism before most people heard the term. He also saw his career get eclipsed by a feisty younger generation, and then made a comeback that kept him busy until the end of his life. And he had a happy home life -- a 69- year marriage and collaboration with Shelly; fatherhood (Ron, Karen and Finn) and grand-fatherhood -- having figured out how to maintain an architectural career while coming home at 5pm each day to spend time with his family.

DnA pays tribute to a life well-lived, through interviews with some of those who knew him, as well as clips from Kappe himself. 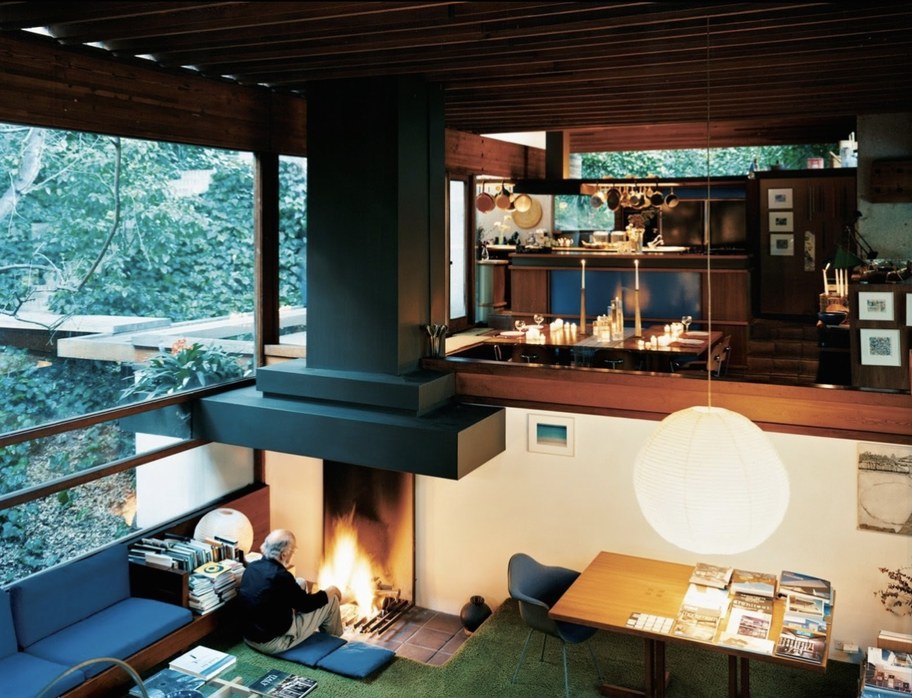 Ray Kappe photography by the fire in his multi-tiered home for of 2009 article in Dwell magazine written by Frances Anderton.

Ray Kappe was born in Minneapolis, studied at Berkeley, then moved to LA, where he started his own firm in Santa Monica in 1953, as postwar development in the Southland was booming. He went on to design more than 100 homes, mostly post-and-beam in the early days and later highly volumetric, multi-tiered, concrete, wood and glass houses; all flowing from inside to outside, open-plan, with multiple sources of natural light and sense of bodily freedom.

In 1962, he and his wife Shelly bought a steep lot in Rustic Canyon for $17,000 because the hillside site had been deemed unbuildable, the LA Times reports.

He commenced work on his masterpiece: a 4,000 square foot house for his family, which was built with his family. At a memorial for Kappe, his daughter Karen reminisced about the summer spent with her mother Shelly and brothers Ron and Finn, polishing wood, buffing concrete and tile, and resting on the unguarded balconies and flying staircases, legs swinging over the swooping spaces.

The house is extraordinary: a composition of split-leveled, open-plan floors made of warm woods, concrete and glass, all supported on six concrete towers over a small stream on a tree-filled site, enveloped in nature while as open and flexible as jazz.

The house was, in Thom Mayne’s words, a “summary of that whole era” of Southern California Modernism that began in the early 20th century with Rudolf Schindler and Richard Neutra, and continued with the Case Study housing period, and onward to the 1960s with the warm, earthy designs by Kappe. 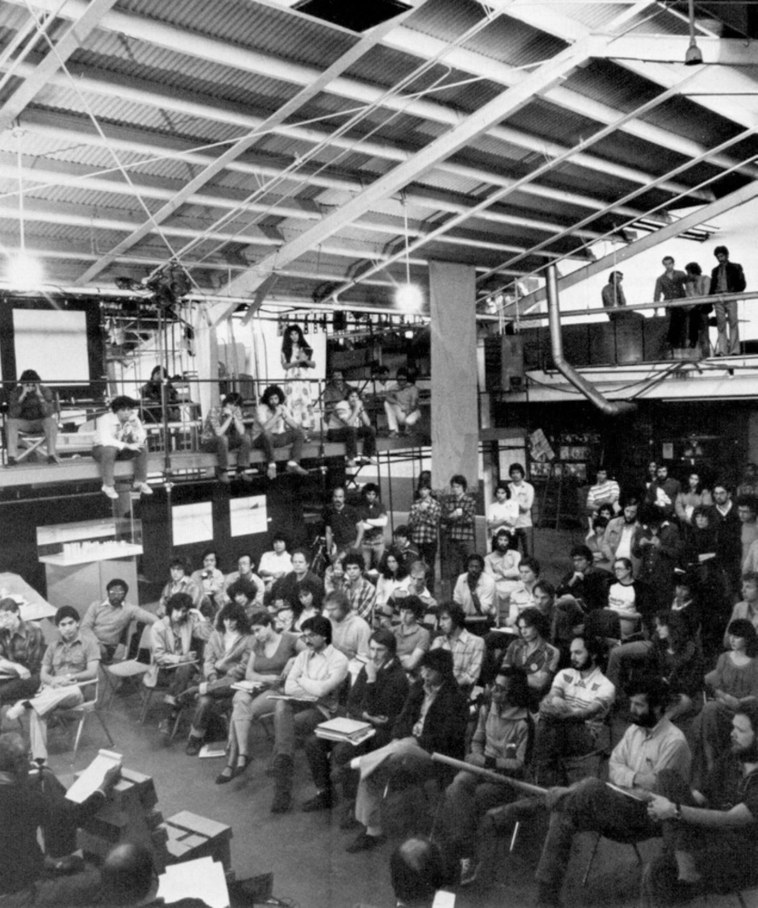 An early SCI-Arc class in the school's "main space" at 1800 Berkeley St. Image via offramp-la.com

His house was completed in 1967, and designated a Los Angeles Historic-Cultural Monument in 1996.

While busy building, Kappe was also teaching. That led to a project that would change the course of LA architecture: SCI-Arc, or the Southern California Institute of Architecture (also a reference to Science and Architecture).

Kappe got into a dispute with colleagues at Cal Poly Pomona, where he had been teaching, says architecture professor Todd Gannon, “which caused him to leave the school with several faculty and about 25 students joining him to form SCI-Arc in a warehouse in Santa Monica in 1972.”

The school was freewheeling and experimental. Gannon says Kappe “felt that students should really lead the organization of their curriculum, and when SCI-Arc began, it actually had no curriculum.”

Kappe founded SCI-Arc with a core group of young renegades who quit Pomona with him (including Thom Mayne, Eric Owen Moss, Coy Howard and Jim Stafford) and a group of final-year students at other architecture schools.

SCI-Arc went on to become an institution and alma mater for numerous noteworthy designers. But there were also creative tensions between the elder Kappe and the young guns, who in the 1970s were forging a new architectural language that was the opposite of rational Modernism: idiosyncratic, singular, concerned with material and formal affect over spatial harmony.

“It was not easy for him because we used to have really fierce fights. But the next morning, we’d have breakfast, sit down, work it out, talk about it and were close,” Maybe recalls.

Kappe’s gift was that he was “able to develop an institution that was researching and innovating state of the art ideas of what architecture is and could tolerate and yet could promote huge differences,” Mayne says.

In the 1980s, as the formally experimental works of Mayne, Moss, and Frank Gehry ascended, Kappe’s work receded.

Yasi Vafai, then a young SCI-Arc grad, remembers knocking on the door of his house in 1991 and being told Kappe had retired. Vafai recalls telling him, “Great men never retire. I'm never going to let you retire, Ray.” She wound up working with him for a summer, and created tours of his homes that helped bring him back into the spotlight.

His work, Vafai says, offered a sensory counterpoint to the digital revolution that began in the early 1990s. 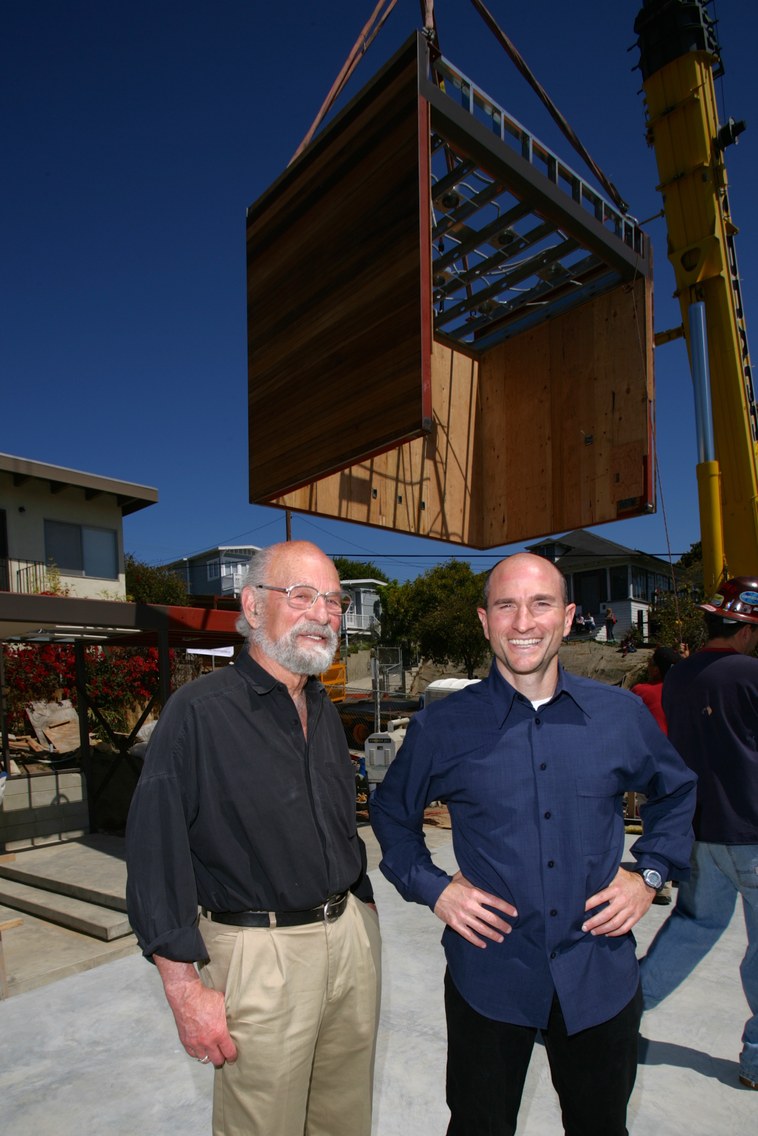 Ray Kappe and Steve Glenn at the installation of Glenn’s home in Santa Monica in 2006. Image courtesy Steve Glenn

As Kappe entered his late 70s, his career got another bounce. Steve Glenn, a former software developer and now CEO of Plant Prefab, was dreaming up a concept for prefab modular modern homes that he called Living Homes.

He met Kappe at an open house for his Katzenstein Residence, up for resale. “I started talking to him about the fact that we were going to focus on modern design and sustainable design and healthy design. And so Ray starts talking about how he had been doing environmentally efficient architecture in the 70s, and how he started working with prefab in the 70s… I was just completely blown away, and I said, ‘Hey, would you be interested in working with me on this?’ And so that's how it began,” Glenn says.

The first Living Home, completed in 2006, made of modules shipped to its location on Highland Avenue in Santa Monica, became the first home ever to receive a LEED for Home Platinum rating.

Now SCI-Arc continues without its founding father. Hernan Diaz Alonso, the current director of the school, says that Kappe was a friend to him personally, and leaves the school in the spirit it was created.

Ray Kappe died on November 21 at age 92, leaving Shelly, his wife of 69 years, his children Ron, Finn and Karen, and several grandchildren and great grandchildren.

A pillar of Los Angeles architecture, Ray Kappe, died on November 21 at age 92. Kappe was the architect of numerous houses in the California Modernist tradition,...

Subliminal messaging in the car colors at the LA Auto Show

Go to the LA Auto Show at the Convention Center, and of course all the cars will be vivid colors.

Looking for Thanksgiving menu ideas for the design and architecture fans in your life? Take a page from a new art project in the guise of a cookbook. It’s called “Le...