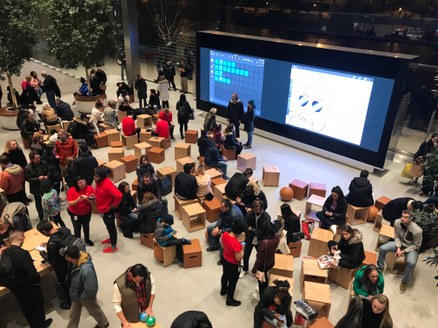 At a September product launch Apple announced a rebranding of its stores. They would now be called “town squares” and would serve as gathering places, not just venues for pushing product.

In October in Chicago, one of the first of these new Apple stores was unveiled. It’s designed by Norman Foster, the British architect behind Apple’s new headquarters in Cupertino.

The building is an immaculate glass case -- described by Chicago architect Aric Lasher as a “horizontal hovering plane with rounded edges kind of like an Apple laptop sort of floating in the sky” -- that steps down to the riverfront in Chicago.

It gives over most of its square footage to areas for hanging out. As you enter from the top you find yourself in is a stepped seating area for presentations and screenings. Enter at riverfront level and you find yourself in a spacious lobby filled with movable wooden cubes for sitting with friends. Apple products are tucked away at the back.

So does it work as both architecture serving a brand and public space? And will it last if it works too well as fun hangout?

Selfie culture takes over the museum

A visitor to Happy Place, one of LA’s many “selfie museum” pop-ups.