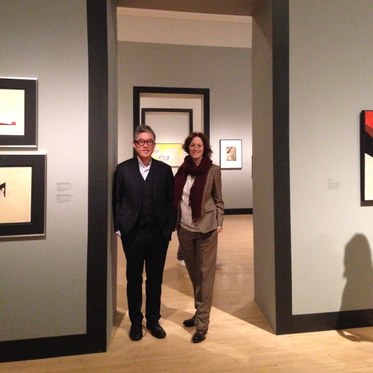 Sharon Johnston and Mark Lee are partners in work and life and run the firm Johnston Marklee, designers of the far-out metallic gas station at the corner of Beverly and La Cienega as well as noted projects like the Hill House in Pacific Palisades and LACMA’s exhibition of Bauhaus artist László Moholy-Nagy.

But their reputation was further enhanced when they became curators of this year’s Chicago Architecture Biennial. They used it as a chance to explore the preoccupations of an emerging generation of architects for which, says Sharon Johnston, “history has a new relevance. I think after postmodernism and certain moments when schisms with the past were so abrupt, I think today many younger generations of architects are looking to history as a source of inspiration.”

In “Make New History,” whose title was borrowed from a book of work by Ed Ruscha, you won’t find many examples of the whirling, lacy, digitally-designed buildings that have dominated architecture for the past quarter century.

Rather you will find meditations on postmodernism, such as a collection of original models of famed postmodern buildings, curated by LA-based Sylvia Lavin, that have shaped architecture today. You’ll find an installation of models of novel tower designs including a stunning “plug-in” vertical city by Mexican architect Tatiana Bilbao. It’s a redo of the 1922 design competition for the Chicago Tribune tower.

And you can see images of beautiful projects from around the world, where designers are trying to navigate past and present, like China’s ZAO/Standardarchitecture, working to breathe new life into hutongs, the courtyard house complexes that are being demolished daily in Beijing.

In a recent LA Times article the paper’s architecture critic Christopher Hawthorne claimed the work on display at the Biennial represents a departure from the more exhibitionist work of older designers like Zaha Hadid and LA’s Thom Mayne.

He wrote that these buildings -- beautifully crafted and firmly rooted to their site -- were not trying too hard for effect, and could even be described as “boring.”

That’s not the way Lee characterizes it however, telling DnA: “Actually I think a lot of the architects we've invited are very radical but they don't they don't wear the radicality on their sleeves… But I think it slowly unveils itself to those who pays attention.”

Lee and Johnston also talk about their most high-profile project to day, the Drawing Institute for the Menil Collection in Houston, Texas. Their serene, white structure is designed to harmonize with the pre-war houses adjacent to the 30-acre campus and Renzo Piano’s building designed there in 1987.

“I think we'll consider the building a success if one could visit the campus for the first time and couldn't quite tell when our building was built,” says Lee.

Selfie culture takes over the museum

A visitor to Happy Place, one of LA’s many “selfie museum” pop-ups.