Examples of streetlights (1909) - From Los Angeles, California/The City Beautiful aka Report of the Municipal Art Commission for the City of Los Angeles. Image courtesy Water and Power Associates

Go back in time and LA streets were lined with ornate streetlights.

You get a taste of what they looked like in Chris Burden’s Urban Light installation in front of LACMA; and in Vermonica, an artwork by Sheila Klein that sat at Santa Monica Boulevard and Vermont Avenue in East Hollywood, from 1993 until it was uninstalled in 2017.

Many lights got replaced by more functional poles, and then bulbs were changed to make way for cooler LED lighting. 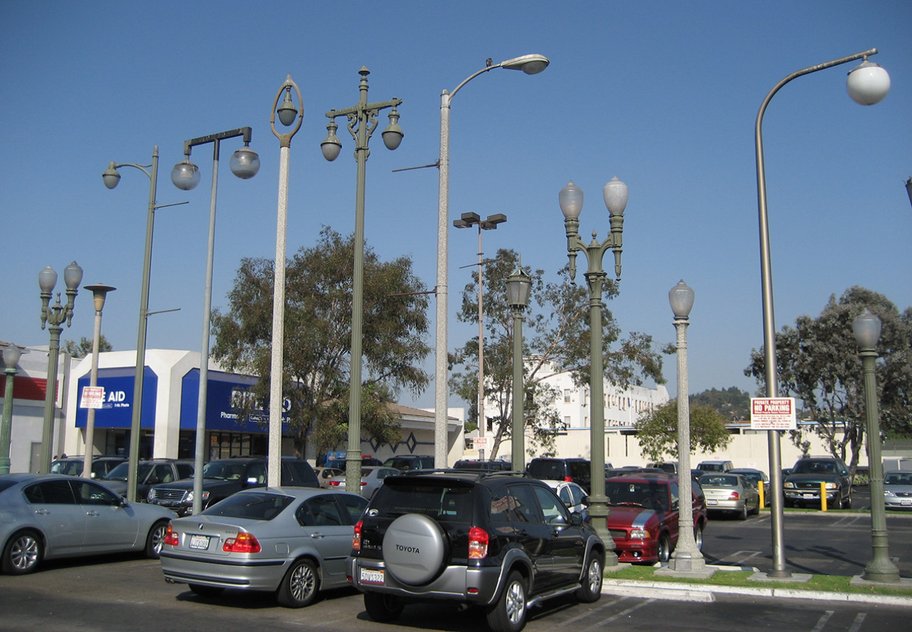 Vermonica, an artwork by Sheila Klein, celebrated LA's classic streetlights until its deinstallation in 2017.

Now the City of Los Angeles has a plan to adorn its bridges and boulevards with a handsome new streetlight, and it’s launching an open design competition to get the best ideas.

It’s a project of the mayor’s office and Christopher Hawthorne, Chief Design Officer for the City of Los Angeles, as well as the Bureau of Street Lighting.

Following is all you need to know about the competition. Listen to our interview with Hawthorne to find out what he’s looking for: It doesn’t mean lots of “smart” technology but does consider the sun and the moon. 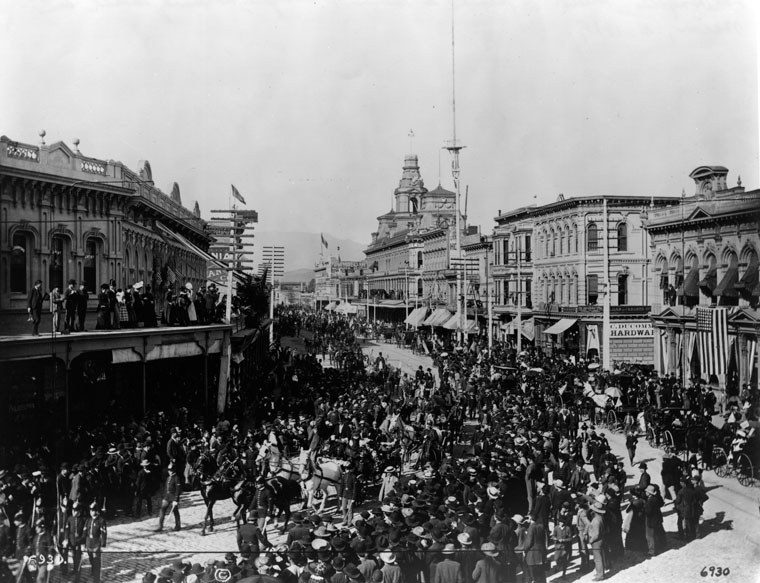 A parade on Main and Temple Streets, looking north, CA. 1889. The city's new 150-foot tall electric light pole can be seen in the center of the photo. Image courtesy Water and Power Associates

What is this competition?

The competition is called L.A. Lights the Way. It calls for a new streetlight to replace the utilitarian standard street light pole currently installed in many areas in LA. There are about 150,000 of them, and they have not been updated since the 1950s. Changes in lighting technology, such as the emergence of LED, prompted Hawthorne to urge the City “to rethink the basic street light design in a more comprehensive way.”

There are three categories: Professional designers, which can mean multi-disciplinary design teams; undergraduates and graduate students in design schools across the region; and Los Angeles high school students.

Is there prize money?

Is this a competition to redesign the pole or the lamp?

Both. Competitors will have the option of using one of the existing luminaires, aka light arm. Designers can also propose an entirely new combination of base pole and light fixture or luminaire.

Will the design be built and installed?

The goal is to put into production the winning design in the first category, the professional category. That will be a two stage competition. Jurors will select a short list of up to four teams. Those shortlisted teams will refine their designs after input from a technical panel at the Bureau of Street Lighting. There will be a rigorous period of testing, with consideration given to fabrication, installation and working within the public right of way in Los Angeles and, notes Hawthorne, “all the jurisdictional complexity that comes with that.”

What kinds of neighborhoods will get the new lights, and will historic streetlights be replaced?

Historic streetlights will stay in place. Hawthorne says, “An important part of this is distributing beautiful streetlights in a more equitable way across the city, because the most elaborate and most beautiful or most notable streetlight designs have tended to be in wealthier areas.” 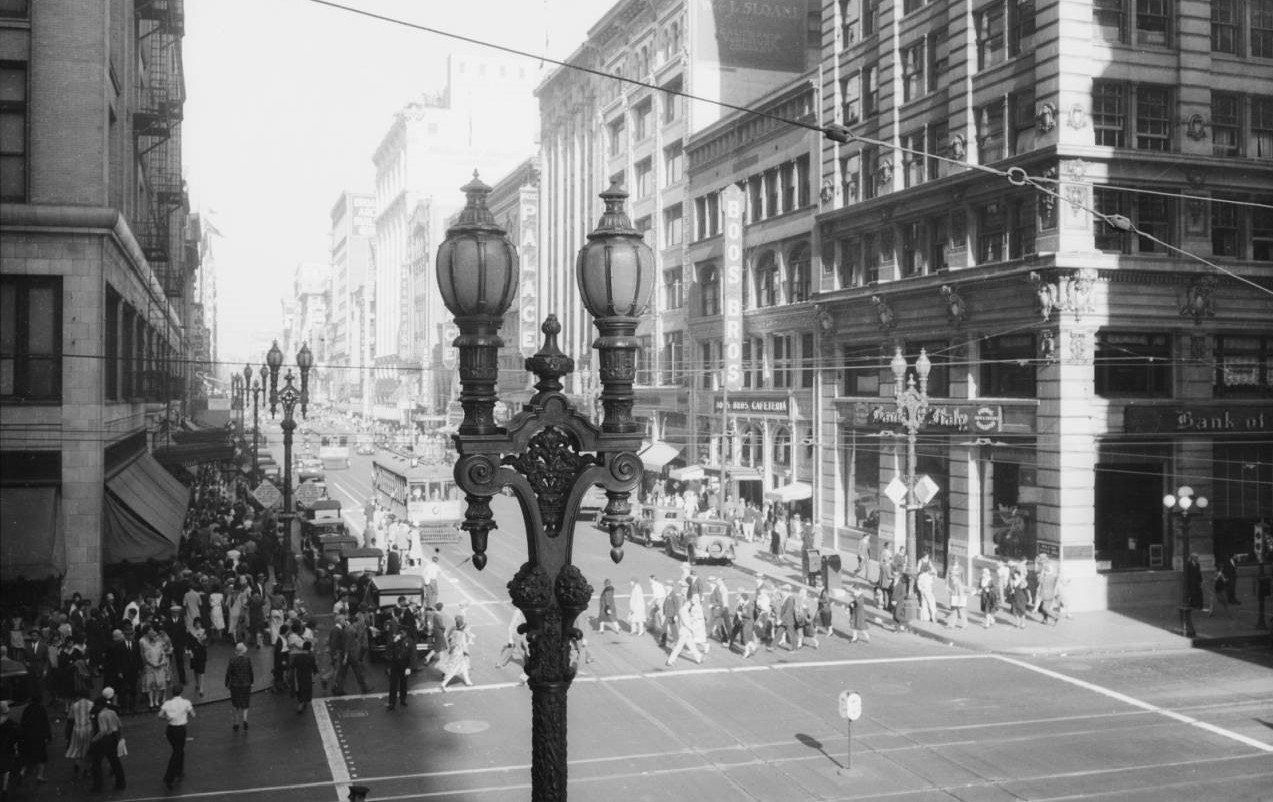 (1930) Close-up view of a dual-lamp 'Broadway Special' on the southwest corner of Broadway and 7th Street. These electroliers are seen running up and down both sides of Broadway, with the 'Specials' at the intersections and the 'Roses' in mid-block. Image courtesy Water and Power Associates

Who will judge the competition?

Are the jurors looking for technology-enhanced streetlight proposals?

DnA reported two years ago on a Smart Node pilot program, featuring a pole filled with technology: chargers for phones and electric cars; public WiFi; a speaker system to warn of an earthquake or other emergency; an environmental sensor, and a security camera. But that’s not necessarily what the jurors will look for.

“We're interested in the proposals we get from competitors about how to incorporate that technology,” says Hawthorne, “and how the design of the standard streetlight might be more seamlessly integrated with the new demands in terms of technology. But I have to say, frankly, I'm much more interested in the basic role that the streetlight needs to play as a piece of street furniture or a piece of urban design in the public right of way.” So designers should think about shade, hardware and the possible inclusion of “some kind of text” relating to a specific neighborhood.

LED lighting is considered cold by many. Will designers be asked to consider quality of light?

Yes, even though the temperature of our lights has gotten a little bit warmer since the introduction of LED. Competitors will have the option to think about dark sky initiatives, relationships to wildlife and moonlight (for example, sensors and poles that can dim a streetlight automatically when the moon is full).