The Museum of Failure 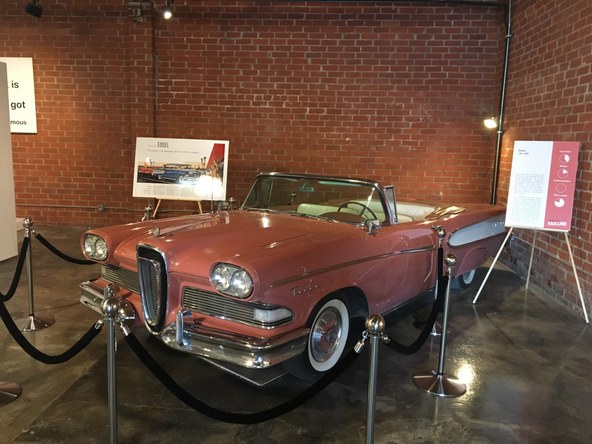 Ford overhyped the Edsel when it was introduced in 1957.
Customers thought it was ugly and overpriced, and the name
became synonymous with corporate failure.
Photo by Avishay Artsy

"Trump: The Game," the Betamax cassette recorder, Bic for Her pens, the Delorean car, Olestra, Pepsi Crystal, not to mention Google Glass and a Chinese sex doll for rent called "Shareable Girlfriend." These are some of the 100 or so concepts on display at a new pop-up museum called the Museum of Failure, located at the A+D Museum in downtown LA.

DnA tours the exhibition with its founder Samuel West, a clinical psychologist and an "innovation researcher," and finds out what connects the over-hyped products and ideas that crash the moment they hit the stores, that are short lived and that are launched before their time.

Despite a trend in Silicon Valley to wear start-up failures like a badge of honor, generally, says West, "as a society we worship success and the more we worship success the more failure gets stigmatized. And I think this museum says let's re-evaluate failure, it hurts and it's nothing we want but it's something that we can actually learn from, if we're willing to talk about it."

The Museum of Failure

Ford overhyped the Edsel when it was introduced in 1957. Customers thought it was ugly and overpriced, and the name became synonymous with corporate failure.

The Movie Art of Syd Mead

Syd Mead envisioned the Spinner flying police cars in Blade Runner, the Light Cycles in Tron and the U.S.S. Sulaco in Aliens. His fingerprints are also on the built...