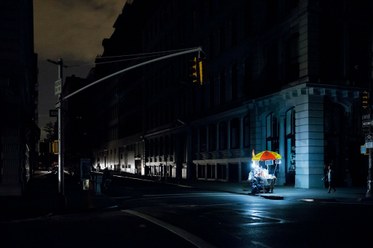 The Highland Corridor that runs between Melrose Avenue and Santa Monica Boulevard here in LA has seen a huge transformation in the last few years. The trend was started by furniture dealers Blackman Cruz and Joel Chen, then art heavyweights like Shaun Regen of Regen Projects and New York transplant Perry Rubenstein moved in.

Rubenstein's latest show features Iwan Baan, a Dutch photographer who launched his career with gritty and beautiful photographs of iconic buildings, including Michael Maltzan’s Inner City Arts in LA. He’s become known for photographing cities from the sky to better capture the social and economic story of a place. And he seems to know helicopter pilots wherever he goes. This lead to him capturing perhaps his most career-changing photograph—of Manhattan, split into dark and light. He tells the story, which includes arriving in New York one day before Hurricane Sandy, on a commission for Swiss architects Herzog and de Meuron. The series is called "The City and the Storm," and it is on show along with other works by Iwan Baan at Perry Rubenstein at 1215 N. Highland Avenue.