Back in the purer, simpler days of computer science, an artist named Alison Knowles teamed up with an electronic composer named James Tenney and together they created an early example of a computer-generated poem.

Both were based in New York and part of the experimental art movement in the 1960s and 70s called Fluxus.

The poem was created in 1967 with a Siemens System 4004 computer, using a programming language called Fortran. They gave a programmer at Brooklyn Polytechnic lists of four qualities that could be assigned to a house: material, location, lighting source, and inhabitants.

The program randomly assembled them into thousands of permutations in a long series of quatrains, that a dot-matrix printer then printed on perforated tractor-feed green and white lined paper.

That poem inspired a house -- taken from one quatrain from this poem:

Knowles worked with an architect named William Breger to interpret these spare phrases. The house was made of fiberglass, covered with a thin layer of plaster. It consisted of two curving, bulbous shapes with tiny entrances you had to crawl to enter.

It was briefly installed on the lawn of a housing co-op in Chelsea. Then, when Knowles was asked to join the faculty of the newly formed Calarts, she insisted the House of Dust come with her.

Fifty years later, CalArts students have recreated the project, as House of Glass, inspired by a different stanza of the original poem.

DnA producer Avishay Artsy talks with CalArts critical studies professor Janet Sarbanes and Art By Translation’s Sébastien Pluot about the origins of the House of Dust, how it was emblematic of the school’s radical educational approach and “an exercise in architectural rebellion,” and why the new iteration is “a backward looking project, but it's also very much a forward looking project, but it's also mostly about activating the present.” 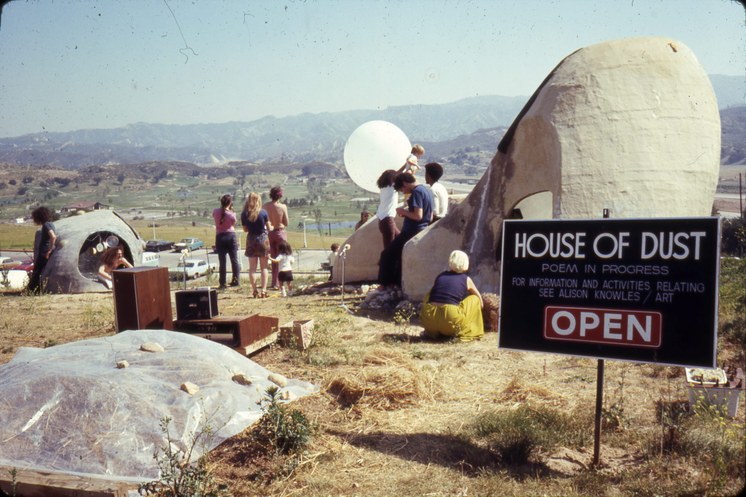 Facebook CEO Mark Zuckerberg is being grilled by Congress Tuesday and Wednesday about political consulting group Cambridge Analytica and its harvesting of the data of tens...

Back in the purer, simpler days of computer science, an artist named Alison Knowles teamed up with an electronic composer named James Tenney and together they created an...

You’ve probably heard of the Venice Biennale. How about the Bombay Beach Biennale? This is offbeat art festival that just took place on the banks of the Salton Sea, the...