New York Times’ California critic Tejal Rao finds baby celery from Yasutomi Farms, a new crop of red walnuts from K&K Ranch, and red bliss potatoes from Black Sheep Farms at the Tuesday Torrance Farmer’s Market, all of which she will incorporate into vegetarian Thanksgiving dishes. Photo by Gillian Ferguson/KCRW

In her weekly newsletter “The Veggie,” Tejal Rao shares vegetarian recipes with her New York Times readers. She visits with market correspondent Gillian Ferguson at the Tuesday Torrance Farmer’s Market. Rao shares a few ways to use seasonal ingredients at the Thanksgiving feast, including a fresh red walnut snack mix as a starter. She’ll be using a waxy, red bliss variety in a hasselback potato gratin recipe that she revisits every year. Her latest discovery is baby celery that she plans to use with apple and onion in a baked dressing. She strongly believes that with thoughtful sides, a main centerpiece is not necessary but recommends a mushroom Wellington for unconvinced listeners.

"This golden and glorious mash-up of potato gratin and Hasselback potatoes, from the acclaimed food science writer J. Kenji López-Alt, has been engineered to give you both creamy potato and singed edge in each bite. The principal innovation here is placing the sliced potatoes in the casserole dish vertically, on their edges, rather than laying them flat as in a standard gratin, in order to get those crisp ridges on top. Allow extra time for the task of slicing the potatoes, for which it's helpful to have a mandoline or food processor (though not necessary, strictly speaking). And do buy extra potatoes, just in case; you want to pack the potatoes tightly and keep them standing up straight." —Emily Weinstein 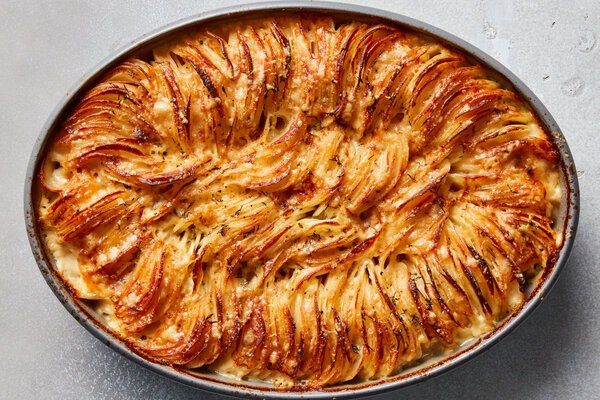 **Because of variation in the shape of potatoes, the amount of potato that will fit into a single casserole dish varies. Longer, thinner potatoes will fill a dish more than shorter, rounder potatoes. When purchasing potatoes, buy a few extra in order to fill the dish if necessary. Depending on exact shape and size of potatoes and casserole dish, you may not need all of the cream mixture.

Classic beef Wellington is a technical feat in which a tenderloin is topped with foie gras or mushroom duxelles, then wrapped in puff pastry and baked. This vegetarian version is less exacting yet just as impressive. Seared portobello mushrooms are layered with apple cider-caramelized onions and sautéed mushrooms, which are seasoned with soy sauce for flavor and bolstered with walnuts for texture. The rich mushroom filling is vegan, and the entire dish can easily be made vegan, too. Swap in vegan puff pastry, a butter substitute in the port reduction and caramelized onions, and an egg substitute for brushing the puff pastry. If you want to prepare ahead, sauté the mushrooms and onions in advance and refrigerate them, then assemble the dish the day you plan to bake and serve it. Prepare the port reduction as the Wellington bakes, or skip it entirely and serve with cranberry sauce for a touch of tangy sweetness. 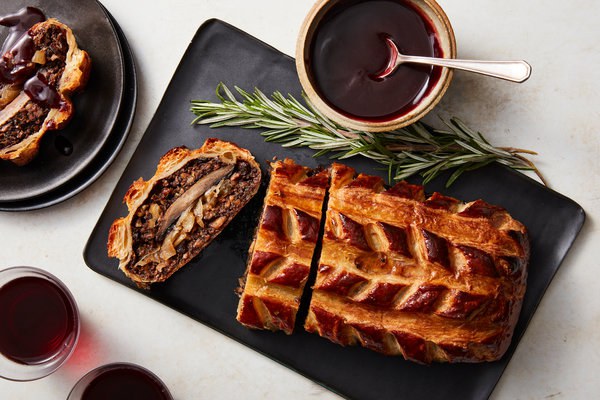 FOR THE MUSHROOM FILLING:

FOR THE PORT REDUCTION (OPTIONAL):