Opt for chicken instead of feedlot beef to lighten your carbon load, suggests journalist Paul Greenberg. Photo courtesy of Shutterstock.

This week, the UN released a landmark report confirming that global climate change is accelerating and human-caused emissions of greenhouse gases are the overwhelming cause. The weather extremes that we're experiencing will get worse, but if humans take steps to curb emissions, the report says that catastrophe can be avoided. So what can people do on an individual level?

Writer and environmentalist Paul Greenberg sets out to answer this question in his latest book, “The Climate Diet,” an instruction manual for leaving the world in a better place than how you found it.

KCRW: When we talk about climate, how can choosing what we're going to eat make a difference?

Paul Greenberg: “Overall, what we need to strive to do is to change systems. The system that is really hurting the planet the most, based on the number of researchers that I spoke to, is this combination of feedlot beef, where you're growing a lot of crops like corn and soy to feed beef, and then ... cows notoriously belching methane, which is an even more potent greenhouse gas than carbon dioxide. So that system is something that we really need to pull back on.

Now, there are systems out there that still make use of that whole corn, soy thing, where the animal itself is just much, much more efficient. So you look at chicken, for example. One of the things, when I wrote ‘The Climate Diet’ that I wanted to do was to not necessarily completely stigmatize people who grew up eating meat. But I did want to say to the meat eater that's not necessarily going to go full on vegan, ‘Look, even if you stay a carnivore, there are some choices that you can make that will lighten your carbon load.’ And a simple switch is switching from beef to chicken.”

“Yeah, it's pretty striking. To break that down a little bit, on the bad vegan side, to make all of these very highly processed foods that kind of seem like meat, or have these textures that are not particularly natural, that takes energy. And that takes packaging. And it takes all sorts of things that happen in the laboratory that cost energy. And of course, when you put a lot of energy inputs, you get a lot of carbon outputs. So staying away from processed things is another  really big deal.

The other thing, of course, is this tendency that Americans, in particular, want to be able to eat anything all the time as quickly as they can also complicates matters for vegans. So if you're here in the northeast in the middle of winter, and you want to have, say, a fresh raspberry, chances are that's getting flown to you from the southern hemisphere, which is going to be a serious carbon burden. So that's the vegan side of things.

On the meat side of things, there are forms of animal protein that are actually super, super carbon efficient. For example, mussels in some instances result in just 0.6 kilograms of carbon footprint for every kilogram of mussel meat that we eat. That's compared to 27 kilograms of carbon emissions for every kilogram of beef. So mussels are still an animal, but much, much more efficient. Hence, that ironclad idea that ‘Always vegan always good, meat eater always bad’ doesn't necessarily hold up when we start talking about CO2 emissions.”

Where do fish live in the climate diet?

“It depends. A big demarcation is wild versus farmed. Farmed fish seem to price out somewhere between pork and chicken. In other words, still not super carbon efficient, but not as bad as beef. Wild, on the other hand, is a considerable carbon savings. The numbers are very complicated. But generally speaking, we seem to be looking at around one-and-a-half to two kilograms of carbon emissions per kilogram of fish on the plate. So that's pretty good. And one of the main reasons is that with a wild product, there is no husbandry involved, right? You're not growing something to feed these things. You're just harvesting them, so the main cost of harvesting fish from a carbon perspective is the catch method … which catch methods are carbon efficient, and which aren't.

Obviously, if you're going to drag the bottom for, say, something like a flounder or a sole, that's energy intensive, because you're literally raking the bottom and having to pull against that rake on the bottom. On the other hand, something like a midwater trawl, which is used to catch Alaska Pollock — which is, by the way, the fish that's most frequently in your fillet-o-fish sandwich — that fish actually turns out to be super, super carbon efficient. A lot of Alaska salmon, which are caught in purse seines,  sometimes set nets, those tend to also be pretty carbon efficient. An,d of course, the most carbon efficient fish of all is the anchovy. So if you like anchovies on your pizza, or if you like them in a puttanesca, that is a great way to go.”

Does that hold true for other Blue fish, like sardines?

“Yes. Generally the category that life cycle assessment people use is small pelagics. So sardines, herring, anchovies, all these fish, because they school tightly. And because you can catch them in a purse seine, or surround net where you're not dragging the bottom, means you can get them in very quickly, very easily, with minimal carbon expense.

Now, the real sad thing about all this is that when you look at the largest small pelagic fishery in the world, which is actually the largest fishery in the world, the Peruvian anchoveta — which is delicious, and can be done in all the ways anchovies are done — 99% of it goes into places where humans never eat it, 99% of it actually goes into fish meal and fish oil, which is largely used to feed farmed fish.”

Let's talk about cooking, because the act of cooking itself has energy costs.

“Indeed, it does. A lot of guests on your show probably love that big Viking range where the gas goes on and boom, your hot butter hits, the steak hits, and all that. But frankly, all of that cooking on gas turns out to be, particularly on the stovetop, remarkably inefficient. Something like half of the energy that you put out into the world when you turn on your gas flame gets lost. Most of the ideas in the book are really not my ideas. I actually just asked about 100 different experts, ‘What is your one or two top choices in your field that you would recommend people doing?’ The people that I spoke to on this sort of cooking energy front all recommended that we need to transition to what they're calling ‘smart electric.’

So if you ever cooked on an electric induction cooktop … you put it on these glass, smooth top surfaces, and they heat up really quickly. And unlike gas, 90% on an induction cooktop goes right into the food. A lot of people say, ‘Well, what if the electricity is coming from a coal fired plant, etc?’ Well, now in this emerging energy economy that we have here in the United States, you can actually change your electricity provider relatively easily. And the instructions are given in ‘The Climate Diet’ to a renewable energy provider. So you could have potentially solar or wind generated electricity going into your house, going directly into your cooktop, so that really no fossil fuels are involved at all in the production of your food in the kitchen.” 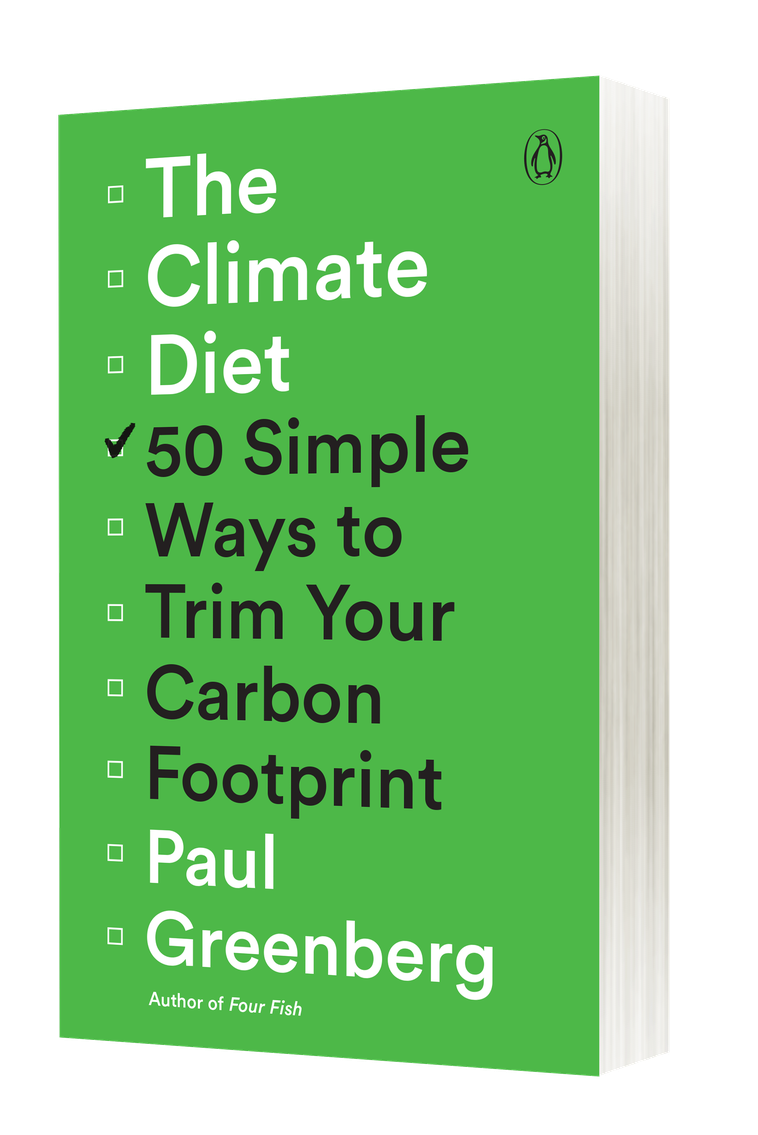 Paul Greenberg’s “The Climate Diet” is an instruction manual on how to leave the planet in a better place than how we found it. Photo courtesy of Penguin Books.