Embracing small birds for the holiday Bridgette and Chloe, are the Bresse breed of chickens, which has appellation d'origine contrôlée status. Photo courtesy of Devil’s Gulch Ranch.

Southern California native Mark Pasternak has been raising animals at Devil’s Gulch Ranch in Marin County for nearly 50 years. Pasternak began raising rabbits, but 15 years ago started to breed quail, squab, a black-boned and skinned bird  thought to be the oldest breed in the world called a silkie chicken, and the French variety Bresse chicken. Pasternak suggests spatchcocking smaller birds to cook evenly and minimize cooking time and grilling, broiling or barbecuing. David Chang recommends pairing richer meats with rice and sauteed apples. If you’re in Los Angeles and are considering a smaller bird, the following butcher shops are carrying turkey alternatives: 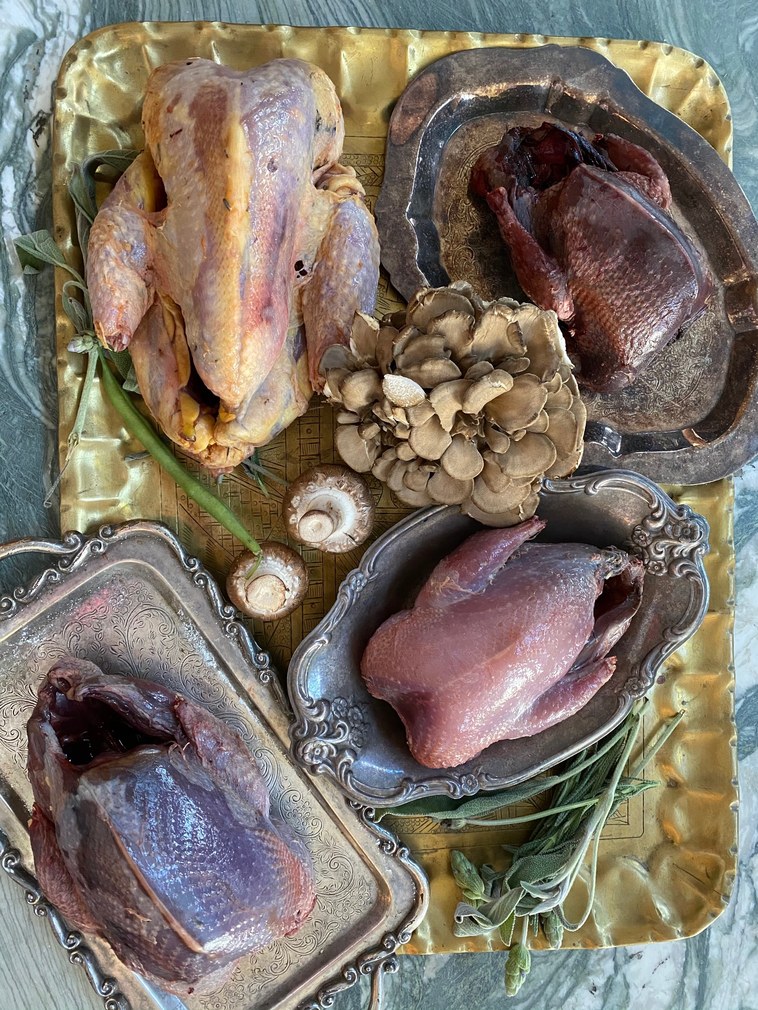 As celebrations are smaller this year, consider an alternative to turkey such as these wild shot pheasant, red-legged partridge, wood pigeon and grouse from Scotland available at Gwen in Hollywood.

“What’s the essential dish on your Thanksgiving table?” It’s a question Good Food has asked every guest over the last few months, and no two answers are the same.

In London there’s a glorious contemporary take on a Victorian kitchen tucked into the Holborn Dining Room. The pies coming out of that exquisite room are savory showstoppers.

Embracing small birds for the holiday

Pomegranates and a pre-colonialism Thanksgiving feast

Market correspondent Gillian Ferguson speaks with co-owner and chef Joshua Gil of MÍRAME in Beverly Hills, who is preparing a pre-Hispanic Thanksgiving dinner available for...

Overcoming the fears of pie crust: advice from Cheryl Day

Making your own pie can be a daunting task during a holiday that already involves so much cooking. Cheryl Day has a crust shortcut and is exploring coriander and Chinese...

Leftovers: bankable assets for pho and a banh mi

Andrea Nguyen is a chef and award-winning food writer living in the Bay Area who has hosted Vietnamese Thanksgivings in the past. Her menu this year will include Imperial...