Vintage Candy Ads: “The Crave for Candy is a Call for Energy”

Is a tray of bonbons a special indulgence, an everyday pick-me-up, or a weight-loss tool?

Over the years, candy has been marketed as all these things.

For a quick tour of confectionary history, Evan talks with the Candy Professor herself, Samira Kawash, on this week’s show. Kawash is the author of Candy: A Century of Panic and Pleasure.

If you reach for the licorice and instantly regret it, Kawash says that some of that anxiety goes back to the temperance activists and Christian vegetarians of the 1800s, who preached that alcohol, meat and sugar caused sexual stimulation. There was also conjecture that sweets could intoxicate from inside the stomach.

But candy has connotations of healing, too. Apothecaries were some of the first people to spin sugar. They used it in remedies like lozenges and cough drops; you might remember Mary Poppins serving a spoonful of sweet stuff to make the medicine go down.

Before the Industrial Revolution, Americans prepared treats at home to celebrate holidays, but by the turn of the twentieth century, candy was easy to mass-produce.

With large supplies to sell, advertisers asked the country, “Do you eat enough candy?”

And not just because it tasted good. Marketers argued that confections were an essential part of a healthy American diet, an source of energy and even a weight-loss aid.

This Baby Ruth ad from 1940 told readers that chocolate bars were full of wholesome “FOOD-ENERGY,” drawing a connection between natural fruit sugars and the (processed) compound that sweetens candy.

By actual energy tests, a 150-lb athlete (pedaling at moderate speed) can ride more than 15 miles on the FOOD-ENERGY contained in one 5¢ bar of Delicious Baby Ruth Candy.

When World War II hit, factory laborers on the home front snacked on sweets between shifts, and the army put treats in soldiers’ rations.

Note the picture of candy corn, which used to be eaten year-round. 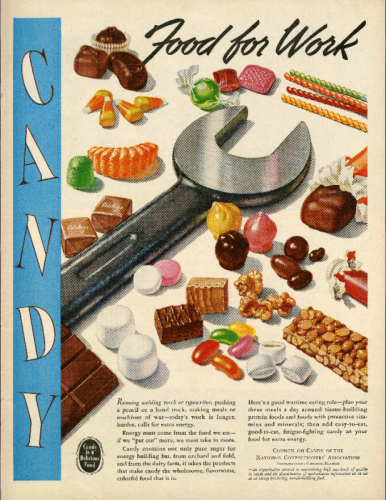 In 1947, the Council on Candy of the National Confectioners’ Association (“an organization devoted to the dissemination of authoritative information about candy”) appealed specifically to housewives.

You’ve steered a broom. You’ve swung an iron. You’ve done your duty by the dishes…

Housework – any work – uses energy. The body wants it back. Candy is an excellent way to put it back.

What a happy way to renew Can Do!

But if the surest way to a fulfilling broom-and-dishes life was landing a husband, the Life Savers of 1957 had you covered.

Of the plump girl with the cookies: Shirley Simkin’s lost her sleek appeal. She never stops eating from meal to meal.

Images: Samira Kawash’s Candy: A Century of Panic and Pleasure. Used with permission.