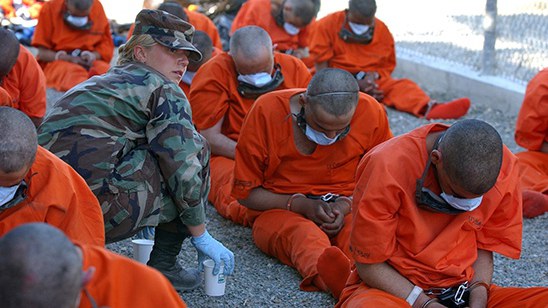 Reports regarding five Guantanamo Bay detainees who were victims of the Central Intelligence Agency’s illegal torture program raise new questions about the American justice system. A Guardian article uncovered that Ammar al-Baluchi, one of the five terror-suspect detainees currently in a decades-long pre-trial status at Guantanamo Bay, was used as a “living prop” to train CIA agents at black sites how to use “enhanced interrogation techniques” that the public now knows were torture by another name. A separate report revealed that there’s a plea bargain negotiation underway for the five defendants in question, including Abu Zubaydah, who, as Supreme Court Justice Stephen Breyer wrote recently, the U.S. government treated “brutally -- more than 80 waterboarding sessions, hundreds of hours of live burial [with live cockroaches in a coffin] and what [the CIA] calls 'rectal rehydration.’” The negotiations essentially amount to another coverup attempt by the U.S. government, argues John Kiriakou, the CIA whistleblower who has spoken out about the intelligence agency’s torture program. Plea bargains, if accepted by the torture victims, would deny them their day in court and keep silent their barbarous treatment.

Kiriakou joins host Robert Scheer on this week’s “Scheer Intelligence” to examine the latest developments in the decades-long case that is tied to the former CIA agent’s own life in inextricable ways. Kiriakou explains how the moral imperative to blow the whistle on the horrors committed in Americans’ name, tore his whole life apart, including leading to 23 months behind bars and, he says, his now ex-wife, then a CIA agent herself, spying on him at the request of their former employer. He also was  behind the capture of Zubaydah, from whom he and an FBI agent obtained invaluable information before others in the CIA took the case into their own hands and committed the brutal, heinous acts detailed in the torture victim’s testimony to the Internatonal Red Cross as well as the 2014 Senate Intelligence Committee’s report on CIA Torture. When the torture began, Zubaydah notably stopped providing information about al-Qaeda.

Revisiting the details of how the CIA torture program began, Kiriakou and Scheer discuss what has come from the revelations Kiriakou made at such a high personal cost. The conversation leads to questions about what kind of country the U.S. is and whether the American public will ever have access to information about the extent of the crimes committed in the post-9/11 years. Listen to the full discussion between Kiriakou and Scheer in the audio player above.