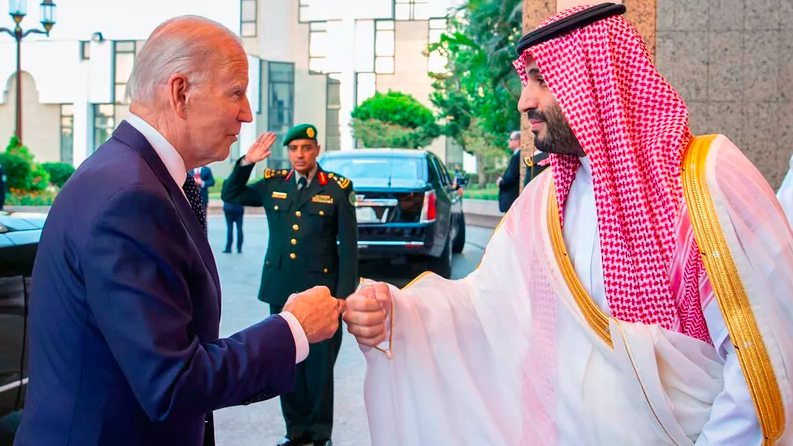 “We are not friends. You are the hired help,” a Saudi man told John Kiriakou on his first trip to Saudi Arabia in response to his polite Arabic greeting. To the CIA whistleblower, who is fluent in Arabic, the moment still encapsulates the “special relationship” between the U.S. and its alleged ally. A CIA analyst for 15 years, his maiden voyage to the Middle Eastern kingdom was part of a CIA operation relating to oil. Decades later, Kiriakou returned in July under vastly different circumstances, this time as a member of the press reporting on President Joe Biden’s controversial visit, including a ScheerPost column titled, “Biden the Warmonger Gets Played by the Saudis.”

On this week’s “Scheer Intelligence,” the journalist and whistleblower joins Robert Scheer to discuss his recent trip, where he examined the encounter between Biden and Mohammed Bin Salman—or MBS as some media outlets call him. After the gruesome murder of Washington Post journalist Jamal Khashoggi, as a presidential candidate Biden openly condemned MBS and his family’s violent regime. And yet now, as global oil prices skyrocket due to Russia’s war in Ukraine, President Biden seems to have forgotten all about his previous declarations.

To Kiriakou, the entire episode demonstrates how the U.S. selectively applies its stances on human rights and democracy. The meeting also reminded him of his experiences as a CIA analyst in charge of human rights briefings where his work relating to Saudi Arabia was undermined by his superiors due to the grotesque relationship the two countries have. Biden seems to have picked up where Trump and his predecessors left off. But while Americans may think it’s the U.S. that has the upperhand in these dealings—as it does with most of the rest of the world—according to Scheer and Kiriakou, it’s more likely that Saudi Arabia enjoys that position.

Listen to the full conversation between Kiriakou and Scheer as they discuss what it means to be the Saudis’ “hired help,” and how this “special relationship” has affected the Middle East and beyond.