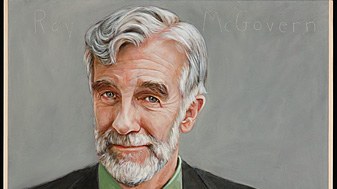 “Scoundrel Time,” Lillian Hellman’s book about her experiences during the Joseph McCarthy’s witch hunt, is one of the books “Scheer Intelligence” host Robert Scheer thinks best describes the current political climate in the U.S. Scheer has spotlighted various dissenting Western voices on the Ukraine war, none of which support Vladimir Putin’s invasion of the European nation but merely question the West’s role in the conflict. CIA veterans Ray McGovern and John Kiriakou, who join Scheer on this week’s episode, are two such voices who have been maligned for their opinions on the subject.

Each guest has extensive credentials and experience relating to the topic, and though their opinions vary from one another and from Scheer, the conversation explores crucial topics at a dangerous time in global politics. McGovern worked as CIA analyst for nearly three decades, preparing The President’s Daily Brief for three U.S. presidents. He’s also one of the founders of the group Veteran Intelligence Professionals for Sanity (VIPS), and has been on “Scheer Intelligence” recently to discuss the roots of the Ukraine war. John Kiriakou, the former CIA analyst who served prison time in relation to blowing the whistle on CIA torture, has come under extensive criticism for his work for the Russian media platform Sputnik News. Kiriakou has repeatedly condemned the Ukraine war on the airwaves, and yet has been called on to resign—this despite the fact that the channel is nearly inaccessible at this point in the West.

On the most recent installment of “Scheer Intelligence,” the three spar about how the Ukrainian conflict is being covered in the U.S., where this war is heading, and what the conflict means for U.S.-China relations, as well as the potential for nuclear war. Listen to the full discussion between McGovern, Kiriakou and Scheer as they expertly pick apart many myths that are being dangerously propagated about Ukraine, Russia, and the West.