The Power of Living in Service to the Oppressed The biblical story of the good samaritan is one that Tom Catena not only knows well, but strives to live by. A devout Catholic and Ivy League-educated doctor, Catena realized early on that he would dedicate his time on Earth to helping those in need, though he couldn’t have predicted the heroic path his life would take.

In the latest installment of Scheer Intelligence, Catena tells Truthdig Editor in Chief Robert Scheer how he ended up searching for and finding meaning as well as love in an African war zone. “I went [to the Nuba Mountains] as a [medical] missionary,’ Catena tells Scheer. “The way I look at things is, I want to go somewhere where whatever abilities I have can be used to the most effect. Not to be too superlative, but one of the greatest needs in the world. This is a very remote place with nearly no healthcare at all.”

Catena, the subject of Kenneth Carlson’s film, “The Heart of Nuba,” is the only doctor in a region in Sudan with a population of 750,000. There, despite facing bombings by the authoritarian government at war with the rebels in the region, the American doctor works relentlessly to treat patients in a hospital he helped establish. But his ultimate goal has not been solely to practice medicine, but to train locals in the field so that they will be able to care for their community when he’s gone.

Not that Catena has plans to leave any time soon. Not only does the medical missionary say he  “find[s] great fulfillment in [the] work” he does there, but he’s also become a part of the community in a number of ways, most recently through marriage to a local nurse. Catena has also found spiritual meaning in his work, and holds that religion should always be “countercultural,” blueprints for which can be found in the lives of Jesus Christ and Saint Francis of Assisi. Acknowledging that there is objectively a lot of harm that religion has done throughout history, Catena tells Scheer he also thinks religions such as Catholicism “can be used for such a great force for good,” a goal he hopes to achieve with his own missionary work.

Listen to Catena and Scheer discuss faith and service in the face of great adversity as well as heart wrenching stories the doctor has witnessed in the Nuba Mountains. 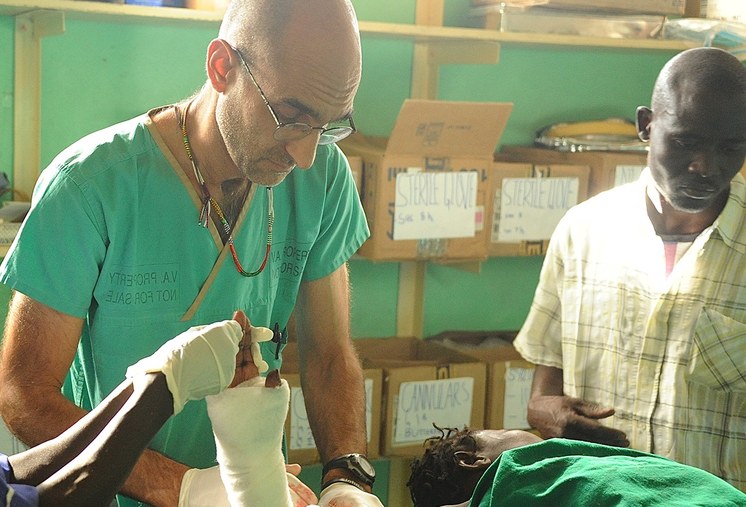