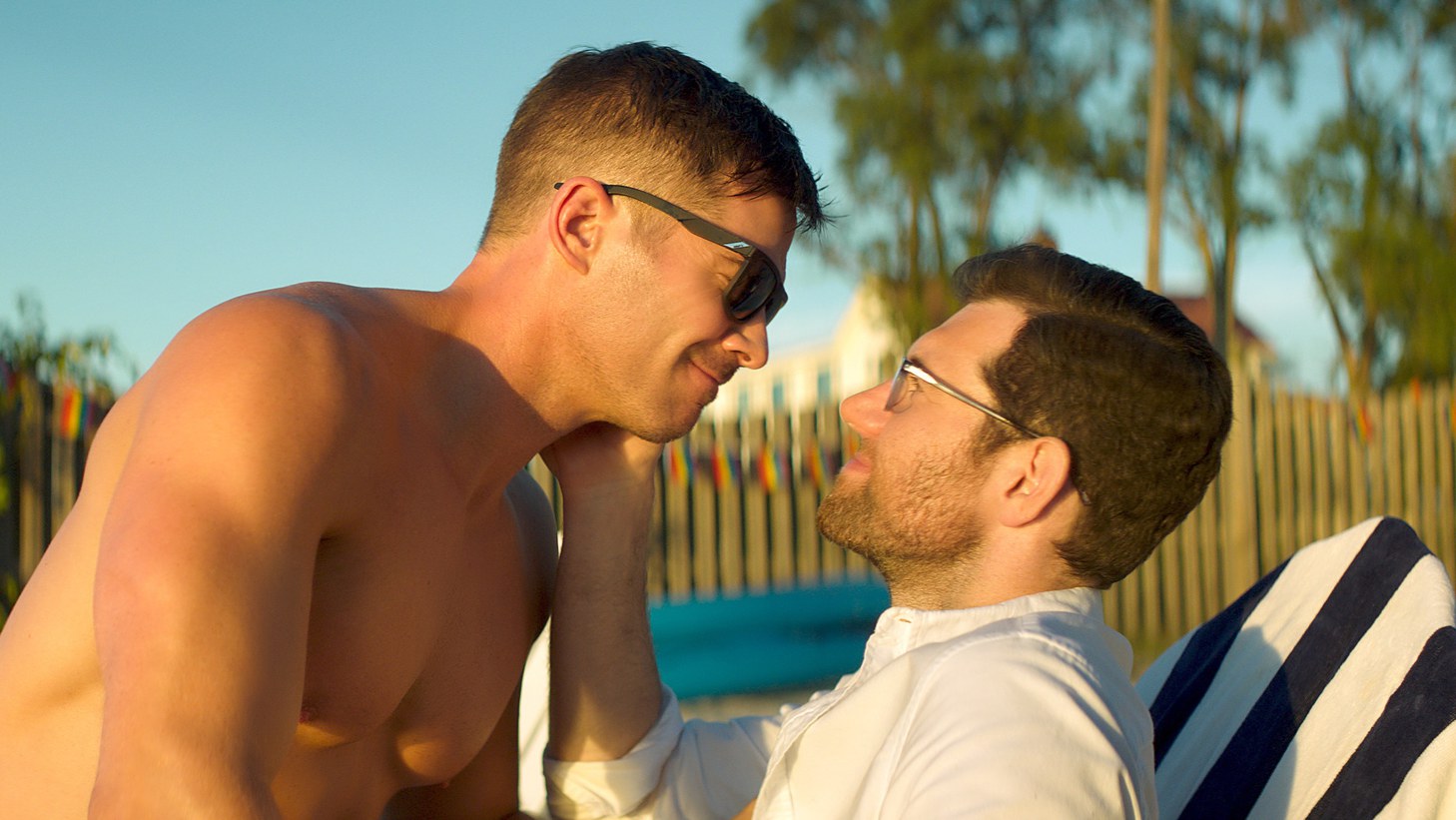 Actor Billy Eichner has found success over the past decade in television. He is best known for starring, executive producing, and creating the comedy game TV show “Billy on the Street,” as well as several appearances on shows like “Parks and Recreation,” “Difficult People,” and “Friends from College.” He also provided the voice to characters on the animated series “Bob’s Burgers,” and in the 2019 remake of the film “The Lion King.”

“Bros,” Universal Pictures groundbreaking LGBTQ+ romantic-comedy film, marks a couple of firsts for Eichner. It is his first time starring in a feature film, and he also took a crack at co-writing the script with director Nicholas Stoller.

In the film, Eichner plays Bobby, a podcaster and curator of a LGBTQ+ history museum who by chance meets macho lawyer Aaron (Luke Macfarlane) at a nightclub. Neither guy is searching for a relationship, but eventually the two grow closer.

The idea for “Bros” didn’t come from an LGBTQ+ activist, but from Stoller, who had directed Eichner on a couple of projects, including a handful of scenes on “Neighbors 2: Sorority Rising,” but they had never written anything together.

“He really liked working with me, and I loved working with him,” says Eichner. “He really understood me and I think he saw in me that maybe I had more potential than people were giving me credit for coming after ‘Billy on the Street.’”

While they were between seasons on the series “Friends from College,” Stoller emailed Eichner saying he and Apatow would like their next movie to be a romantic comedy about a gay couple. Stoller is heterosexual, so he asked if Eichner could write and star in the movie, and he would direct it.

“I was shocked,” he says, telling them he didn’t know if he was capable of making it, as he had never written or starred in a movie, but agreed to try it. “My God, I was so flattered.”

Eichner knows the weight of collaborating with Apatow and Stoller, the filmmakers of some of the biggest romantic comedies of the past 25 years.

“What an amazing opportunity for me to get to work with them,” says Eichner, “and to build a comedy that has their tone, all of that explosive humor and also hearts, but around a gay couple, which is something that we just haven't seen very much.”

Movie needs to be authentic

But Eichner was also concerned about making the movie sound honest and real. “One of the first things I said to Nick [Stoller] at that first coffee meeting was, ‘as flattered as I am by you even thinking I can pull this off, the one thing that really means a lot to me is that the movie is authentic,’” he recalls, adding, “You can't just do ‘When Harry Met Sally,’ slip in two guys and have the story play out the same way. It's just a little bit different.”

What changed his mind about writing the script was that everyone involved in the film trusted and believed in him.

“One thing everyone kept telling me, especially Stoller, is even when some of the details about gay culture and gay life that I was educating him on were a bit eye opening to him or new, he always said to me, “If it's honest, we're doing it,” Eichner states.

Adding, “Honesty really is the best policy here, it makes the movie funnier, and makes the movie more grounded. It gives it nuance, it makes it a more rich experience that feels lived in, and even frustrates folks who for some of this might be new information. And they're going to feel that it feels honest.” 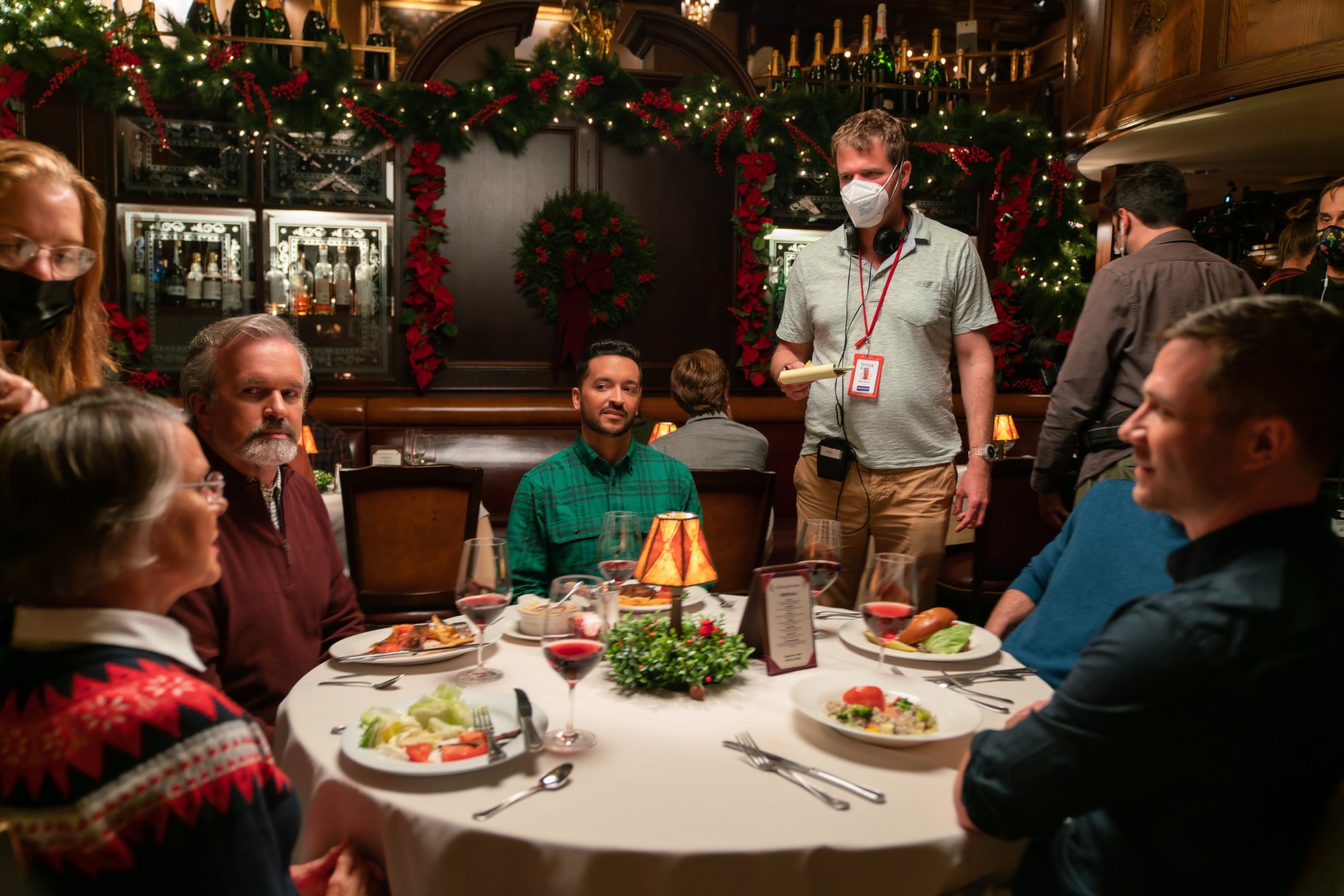 Getting Universal Pictures on board

Stoller and Apatow, who had a long, successful history with Universal Pictures, thought of bringing the idea to Universal Pictures first. “They said, ‘Let's pick Universal first and see how it goes, and if they don't bite, we'll go elsewhere. We'll see what our other options are,” Eichner says.

But the veteran filmmakers were confident the studio would greenlight it. “I never in a million years thought that one of the real major studios, like Universal, would come on board to do the movie,” Eichner states. “To their credit, [Stoller and Apatow] have always just gotten to make pretty much whatever they wanted to make, and that's not true, necessarily, if you are an LGBTQ creator… I am so happy to say that I was proven wrong.”

Casting Macfarlane as Eichner’s on camera love interest also proved to be the right move.

“It's one of these magical, fleeting things. It's hard to capture, it's hard to predict,” Eichner says “[but] from the second Luke walked in, it just felt like there was this spark between us. He really understood the character and we just had a great time together.” 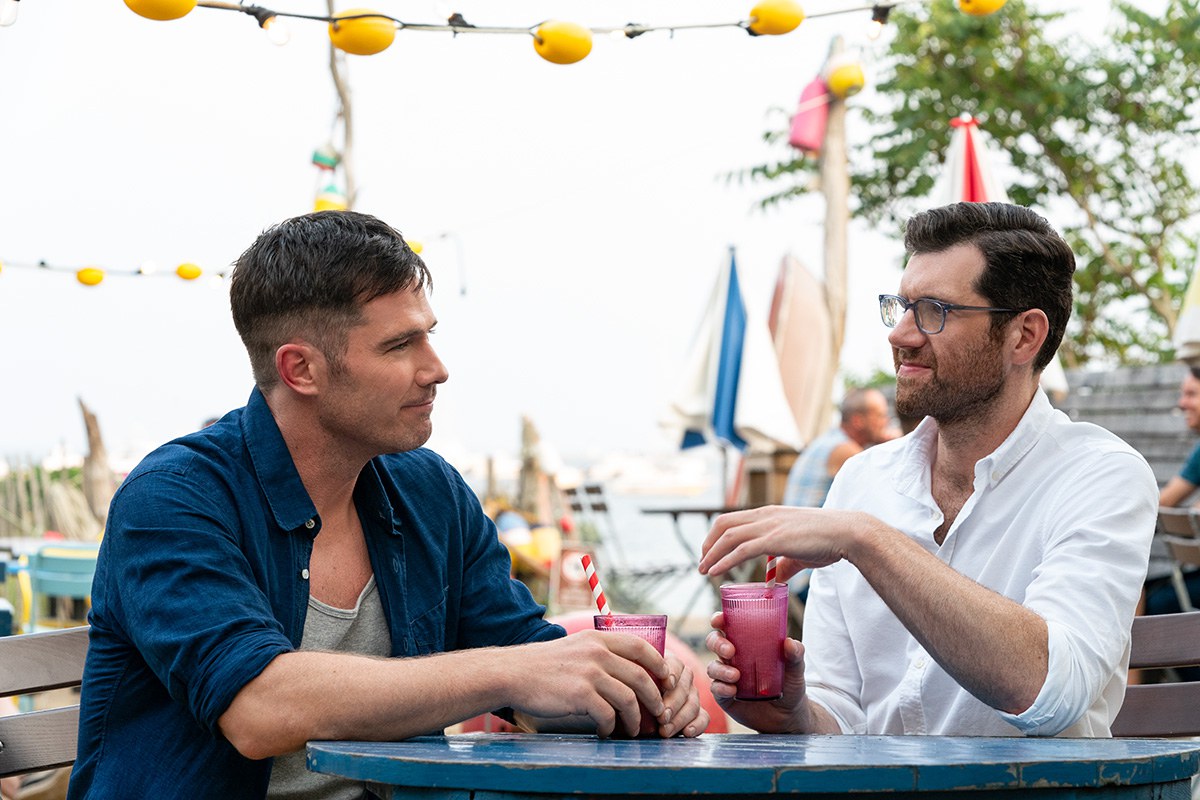 “I am so lucky that [Luke Macfarlane] did the movie. I don't know what we would have done without him,” says Billy Eichner. Macfarlane and Eichner in “Bros.” Photo Credit: Universal Pictures.

For Eichner and Stoller, co-writing the script was a learning experience. “I’d never written a screenplay. I mean, I've written comedy for a long time, but It was a learning process for both of us,” Eichner says. “[Stoller] walked me through how to structure a screenplay, and I educated him on gay culture. It was a partnership that ultimately really worked.”

At the same time, Apatow had his hands off the script. “He gave us his thoughts as we went, but I think ultimately, he trusted us,” he says.

Streaming was never on the table

Although romantic comedies have been relegated to streaming, Eichner says that their goal was to premiere the film in theaters.

“Because [‘Bros’] is unlike anything many people have seen, I think everyone was really excited and passionate about having people go see this movie and experience it in a movie theater,” he states. “There is something unique, powerful and just fun about sitting and watching a great comedy, and a great romance on a big screen in a dark theater. It's a great escape from the world.”

And just like Nora Ephron movies, Eichner hopes audiences will come back “again and again,” at different points of their lives to watch “Bros.” “As much as we need all the greedy stuff, and all the superhero stuff, and all the cynical stuff, we need the alternative,” he declares.

One of the scariest moments for Eichner was to test screen the film. “Leading up to it I was absolutely terrified. I was frozen,” he recalls. “Thankfully, even from that very first screening, people really got it. They loved it. They were laughing out loud.”