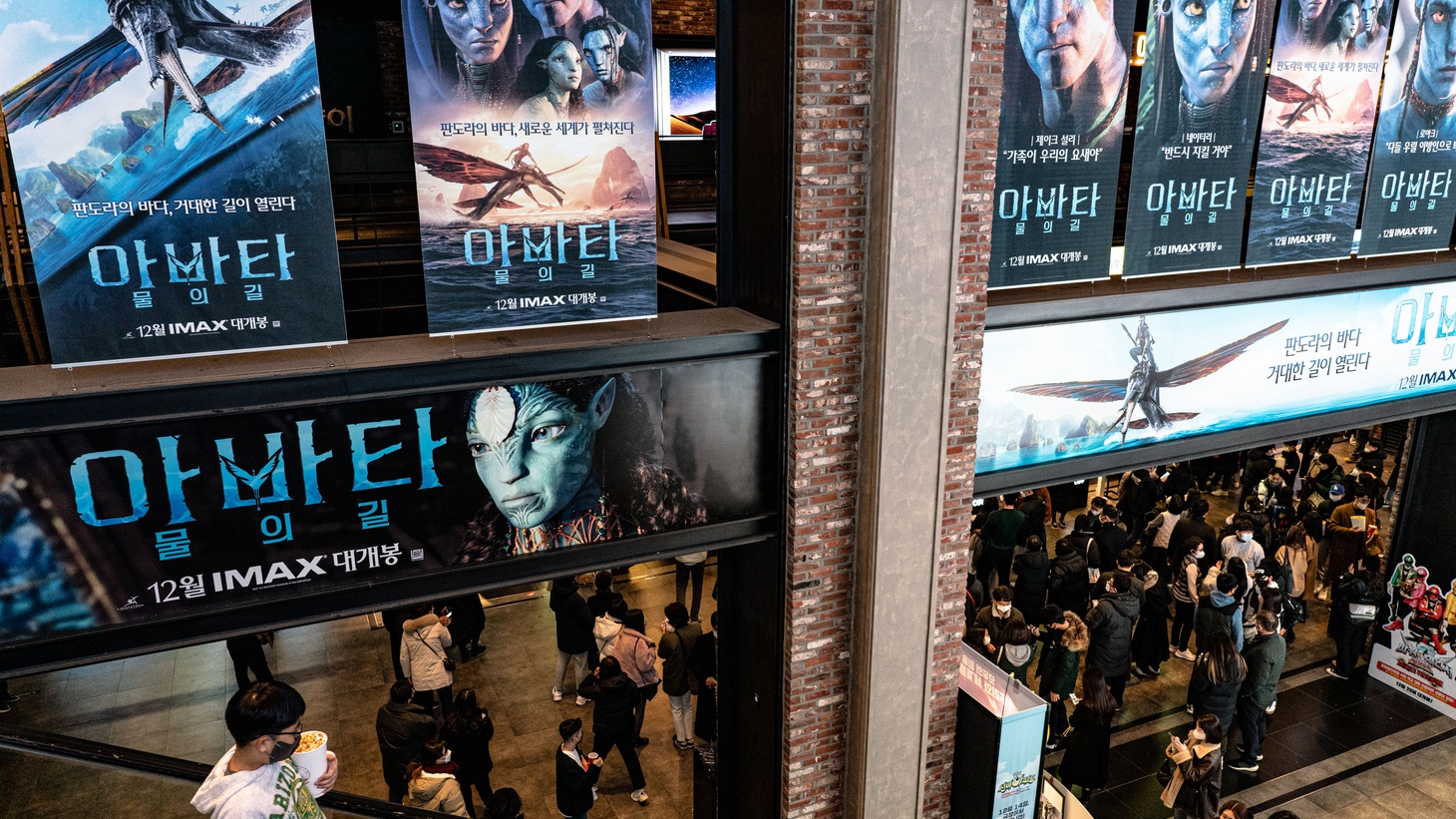 “‘Top Gun: Maverick’ and ‘Avatar: The Way of Water’ were the main bright spots that gave hope to people in the industry that movies are not dead, and that with the right incentive, audiences will turn out in droves,” says Kim Masters. “Avatar: The Way of Water” signboard displayed at a movie theater in Seoul, South Korea on December 17, 2022. Photo by Kichul Shin/REUTERS.

While Hollywood had two bright spots with “Top Gun: Maverick” and “Avatar: The Way of Water,” box office sales were still 35% lower in 2022 than before the pandemic. Kim Masters and Matt Belloni analyze whether audiences are ready to go back to theaters in 2023, or if studios will maintain their pandemic strategies in place, releasing movies to their streaming services.

Masters: The 2022 box office, which we can now see clearly pictured, it's not a frozen image, it's still going. We have “Avatar: The Way of Water” about to eclipse “Top Gun: Maverick” as the number one movie of 2022 internationally.

But what we saw was that those two movies, “Top Gun: Maverick” and “Avatar: The Way of Water” just were the main bright spots that gave hope to people in the industry that movies are not dead, and that with the right incentive, audiences will turn out in droves. And that is the upside.

The downside, of course, is that box office was off by about 35%, correlating with about 35% fewer movies in the theater.

Will audiences go back to theaters?

Masters: The question going forward is if the number of movies is ramped up, as it will start to really ramp up following the course of the pandemic in 2023, will audiences sort of remember that they liked going to the movies? That it's fun to go to the movies? That it's a relatively inexpensive night out in today's world? And will they then start going to more movies because it has been this feast or famine year?

Most genres have not broken out

Belloni: That's the scary thing here because we've seen certain genres of movies that were fairly reliable sources of grosses in theaters, just not being that anymore, particularly the family film. “Minions” was really the only animated film to break out this past year, and there were several. The numbers for the “Puss in Boots” over the holidays were not great, and that was a really good movie that got good reviews.

So have audiences been trained now to accept those animated movies at home, or to think that they're about to come into their Disney+ or other service when they see them advertised for theaters?

The other one is adult drama. We saw over the holidays, the awards movies, one after another just flopped in theaters. We got a Steven Spielberg movie, “The Fabelmans,” that's only $12 million, which is pretty shocking for a Spielberg movie, and that has been a trend throughout the year. Other than “Elvis” and “Everything Everywhere All at Once,” there hasn't been an adult movie that has really broken out like that.

Masters: A lot of people are concerned. We've talked about this before briefly: people blame Bob Chapek for having put so many Disney animated movies onto the streamer, and that just created this expectation that if you wait a minute, I think the older audience is also susceptible to that, they think, “Well, I can wait.” They do wait, and that hurts the box office.

The rush to streaming is very toxic

Masters: Nonetheless, the studios are very motivated. The legacy studios, not Netflix. I think [they] have really realized that this rush to streaming, which to be fair to them had been insisted on by Wall Street, is very toxic for the business.

They do better when movies have some kind of a window in theaters that's exclusive, and then you generate an event that commands more attention, even when it comes to the streamer. But also if you're doing merchandise and toys, I think they've decided, “We went too far too fast,” but they are not speaking with one voice at this point, as to a window.

In an ideal world, you'd say, “This is the deal, audience, you have to wait”, [and] what was more recently 72 days, that became closer now to 45 days. But some studios have gone shorter than that or to nothing. It's all over the map.

No studio consensus. They have different agendas

Masters: I think that without colluding, which is illegal, the studios need to maybe achieve some sort of consensus, so the consumer knows what to expect.

Belloni: That's interesting, because these companies have different agendas. If you look at a company like Warner Bros. Discovery, they are pivoting into theatrical exclusives because they want that revenue upfront, and they believe that they can get that revenue from the theatrical release, and then the waterfall will flow to HBO Max and further.

But then you look at a company like Comcast, which owns Universal Pictures, they're leaning more into the windowing of premium video on demand, where they put the movies in theaters, but then very quickly, offer [them] at home for a significant upcharge for the rental. Then they go to their streaming service, Peacock, and then all the others. So they're trying to get as [much] money ringed out of these in a different way.

Disney is all over the map, where they're putting some movies of their hits, like “Black Panther: Wakanda Forever” that got a pretty significant theatrical window from November through February, and then a movie that [didn’t] hit, like “Strange World,” that was almost immediately dropped on Disney+.

Belloni: So you're getting mixed messages from these companies, and I'm not sure that's the best strategy, but it's based on where these companies believe that they are best inclined to benefit long term.

Masters: But I think this is still kind of fluid. If you ask Donna Langley, who runs the Universal film studio, this thing of moving movies onto [POVD] premium [video] on demand quickly is not what she would favor necessarily, but her boss, Jeff Shell, who we know is very gung-ho on the Windows shortening, is in charge.

At Disney, for example, Chapek, generated a certain amount of ill will, to put it mildly, with his decisions. Bob Iger is now in the chair, and he's going to look at this differently. I did check in on this for a story I did at the end of 2022, and I was told, “Nothing to say at this time.” But you have to think that Bob Iger, who comes from a different mindset, completely, than Bob Chapek, might see this issue of windowing differently, especially when it comes to animation.

Belloni: I think that there's been a lot of blame placed on Chapek for telling the audience, the family audience in particular, that the best stuff is going to go to streaming and the Pixar movies: “You love them in theaters. Now you can get them in the comfort of your own home.” I'm not saying “Lightyear” would have been a hit otherwise, but I think when people saw that, they said, “Oh, that's just going to be on Disney+ very quickly.”

They've to figure out how to address that. If that market goes away in theaters, these movies cost $200 million to make a Pixar or a Disney animation, big tentpole movie, and if you're just going to start dropping those on Disney+, the economics there don't really add up, I don't think.

Masters: I think for a lot of legacy studios, the idea of dropping $200 million on a movie for streaming as [David] Zaslav has already said, “Forget it” at Warner Bros. Discovery.

Streaming is the world

Masters: In this twist, Brian Robins at Paramount – who was supposedly brought in to be the new era of pivoting to streaming – seems, as far as I can tell, to be the first guy to pull a movie that was made for streaming out of streaming and put it in theaters. That was “Smile,” which he saw and decided to test and said, “Let's put it in theaters” and it was a hit.