Alex Plank co-created WrongPlanet.net, an online autism community. He also hosts and produces the online series Autism Talk TV. Over the past year he has worked as a consultant on the FX series The Bridge. He works with actress Diane Kruger, who plays a character on the autism spectrum, and the writers and producers of the series to bring authenticity to that character. Plank is also in post-production on the documentary Shameful about how children with autism are mistreated in France. 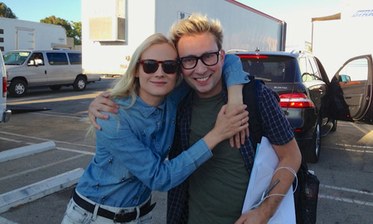 Alex Plank with Diane Kruger on the soundstage of "The Bridge"

Alex Plank co-created WrongPlanet.net , an online autism community. He also hosts and produces the online series Autism Talk TV . Over the past year he has worked as a...

Actor Max Burkholder plays Max Braverman, a boy with Asperger's, on NBC's series Parenthood , now in its fifth season. Burkholder talks with Kim Masters about how he...