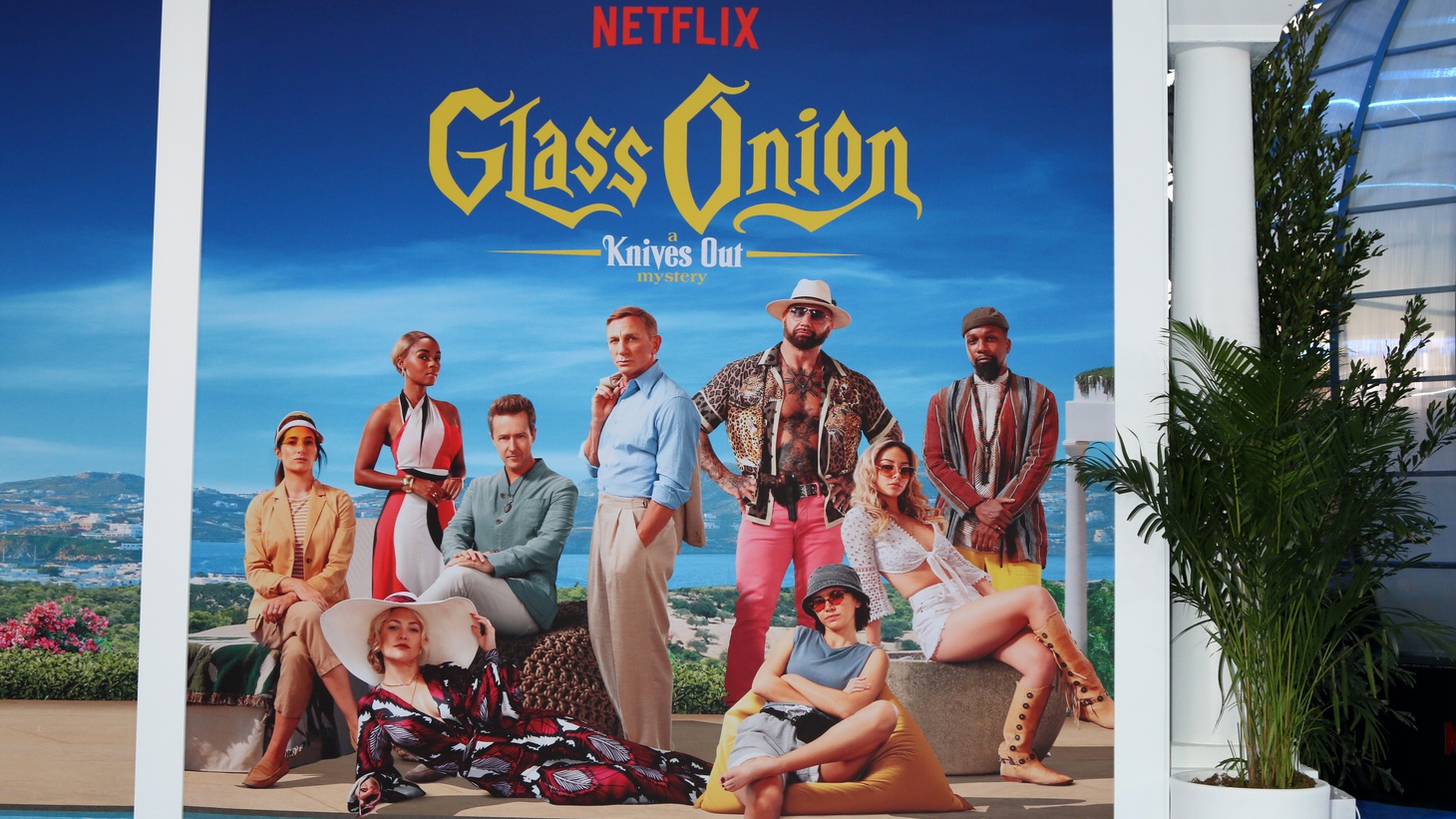 “For the theater owners, this is like Netflix showing them a big juicy cheeseburger, letting them take a bite, and then yanking it back,” says Matt Belloni, founding partner of Puck News. A sign of the film "Glass Onion - A Knives Out Mystery" posted at its Premiere at Motion Picture Academy Museum in Los Angeles, on November 14, 2022. Photo by Nicky Nelson/REUTERS.

Netflix has done something it had not done before. After paying more than $450 million to own the “Knives Out” movie sequels, it released “Glass Onion: A Knives Out Mystery” into 600 theaters around the United States. But after only one week, and making about $15 million, Netflix pulled it from theaters, put it away for a month, to then re-release into Netflix’s streaming services later in December. Kim Masters and Matt Belloni banter on what this possibly means for the film, Netflix and the movie theaters.

Netflix does something they've never done before

Kim Masters: Netflix paid an eye-watering $465 million, almost half a billion dollars, for two sequels to “Knives Out,” which [would] initially [be] a regular theatrical movie, that [would] play until it exhausted its window, [and make] a lot of money.

But, I guess to make the deal, they agreed with Rian Johnson, the director and his producer, that they would do something they've never done before, which is to run it for a week in 600 theaters – the first time they've done a deal with big theater chains, AMC and Regal – and then, they would pull it. A month will pass and on December 23, this thing will be on Netflix.

Netflix did not extend theatrical dates

Masters: Many people, some of whom work at Netflix, were really hoping that Netflix would get a taste of that cash, because we don't have exact numbers, but we know it did very well during its week on only 600 screens, which is small for a broad release. They were hoping Netflix would get on the crack pipe of that cash coming through the door, but Netflix did not. Netflix did not extend it, did not try to extend it, as far as we know, boasted that they don't want to extend it.

Matt Belloni: Exactly. And I never thought they would.

Will this stunt help or hurt the film?

Belloni: This was a stunt that they did for two reasons: one, to appease the filmmaker who really wanted this. And two, to see if this kind of a high-profile release for a week will help or hurt the film when it debuts on streaming.

I think the jury's out on that. I happen to believe that these kinds of theatrical releases help when it debuts on streaming because it creates an event and more hoopla around the movie. But we'll see how it does when it lands there.

Reed Hastings was very specific. He said at a conference this past week, “We're not in the business of building up theatrical. We are in the business of breaking through the noise.” And they believe that this kind of a stunt helped that and that they can do it on streaming.

Masters: Of course, they don't report the box office. They don't report meaningful streaming numbers that we can make sense of. Sometimes they say this is huge, but we don't really know exactly.

Netflix has inched toward a different thing

Masters: I think that people have just been frustrated in the community. Other companies that [have] relied on the old model, every major studio, basically, they want Netflix to admit that they wanted to reinvent the wheel in Hollywood, and they don't know what they're doing. There's ever so much more money to be made, and they wanted it to go differently.

I just think even Rian Johnson, if he's honest, and his producer feel they would have much rather had it be so compelling that Netflix would say, “Yes. We will do more theatrical,” as they have done. They weren't going to do advertising and now they're launching an ad tear. So they have inched toward a different thing. But in this case, no.

Rian Johnson and Daniel Craig made a lot of money

Belloni: Rian Johnson got paid almost half a billion dollars for two movies, so he's [forfeited] the right to complain about what Netflix wants to do with those movies.

Masters: He doesn’t keep that. He has to use some of it to make the movie.

Belloni: That's true. But he made a lot of money on this, as did Daniel Craig, so nobody should feel bad for them.

Nobody is happy with this stunt

Belloni: However, this is a guy who was a big champion for the theatrical experience, and I think the takeaway from this one week experiment is that nobody was happy with it.

Theater owners were very grateful for the movie. They said they would put it in 600 theaters. But what they saw is that the per screen average for the movie was very high, it could have done a lot more and would have likely played through the holidays. So they're not excited.

I think a lot of talent that saw what was going on said, “Well, wait a second, I'm making a movie for Netflix. Where's my one week in 600 theaters? They're not doing this for me!”

When you look at the overall streaming component, Netflix wasn't that happy doing this. They did say it was a stunt, but they firmly believe that the Netflix movie should play on Netflix. So there's no happy campers [in] this situation.

Masters: This has been a lean year. There haven't been enough movies to really go into theaters. It's been very, very short due to the pandemic, and I'm sure the theater owners were disappointed, hoping that Netflix would say, “You know what? We're gonna go longer.”

Belloni: For the theater owners, this is like Netflix showing them a big juicy cheeseburger, letting them take a bite and then yanking it back.

Netflix theatrically releases “Glass Onion: A Knives Out Mystery” for a week, then pulls it, to re-release it to its own platform. What could this mean for the film?

Filmmaker Luca Guadagnino on ‘Bones and All’ movie, Ferragamo doc

Italian filmmaker Luca Guadagnino discusses the making of “Salvatore, Shoemaker of Dreams” doc and “Bones and All,” and working with actor Timothée Chalamet again.