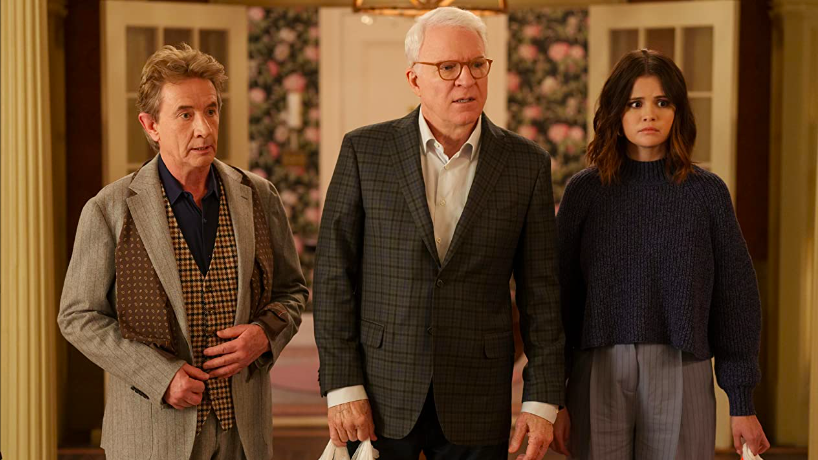 “I started to think about true crime podcasting, and how to make this idea sing in a modern way…and I thought about Ruth Gordon and ‘Rosemary's Baby’,” says John Hoffman, co-creator of the show. Martin Short (left), Steve Martin, and Selena Gomez star on “Only Murders in the Building.” Photo by Craig Blankenhorn/Hulu.

Hulu’s original series “Only Murders in the Building” has been nominated for 17 Emmys, including one nod for outstanding comedic series, plus two nominations for of its lead actors Steve Martin and Martin Short. Co-creator John Hoffman says “it is hard to complain.” The show became a huge hit and has been the most watched comedy on Hulu, ever.

Season two of the comedic murder-mystery series, which is now streaming on Hulu, continues to tell the saga of three neighboors – Charles-Haden Savage (Martin), a lonely one-time TV start; Oliver Putnam (Short), a faded broadway director who is in arrears on his building fees; and Mabel Mora (Selena Gomez), who’s living in and renovating her wealthy aunt’s apartment. The trio is entangled in another murder-investigation in their exclusive Upper West side building. And their obsession with true crime that formed an unlikely bond, continues as they  document the mysteries in their building, a place where murders tend to happen.

The shows’ co-creators Martin and Hoffman explain how they met and what it took to get this idea from paper onto the screen.

Sharing the “spark of an idea”

After Martin came up with the concept for the show, in another show biz moment, his agent, Danny Greenberg, set up a lunch-meeting with Dan Fogelman, the creator of the acclaimed television comedy-drama “This Is Us.”

Martin wasn’t thrilled with the plan at first, thinking this was one of those gatherings where “everybody’s fascinated with each other,” and as soon as it is over, “everybody is bored and the fascination is over, and nothing ever happens.”

They met, and as they were getting the check, Martin shared his idea about three older men solving crimes in their building. “As it was coming out of my mouth, we all kind of realized, ‘This isn't a bad idea!’,” he recalls, and then, “it just went on like a high-speed train.”

Folgeman became one of the show’s executive producers along with Jess Rosenthal, who then connected Hoffman to Martin. “You definitely don't say no to that meeting,” says Hoffman, who came onboard as a co-creator of the show.

Before they were teamed up, Hoffman recalls parking his car when he received an email about Martin’s idea. He sat in his car and immediately “started typing things about pre-war apartment buildings and my love for them in New York City,” he says. “And I started to think about true crime podcasting, and how to make this idea sing in a modern way…and I thought about Ruth Gordon and ‘Rosemary's Baby.’”

Fogelman, Rosenthal, Martin and Hoffman had a “meeting of the minds” and began a conversation of the show’s first episode. 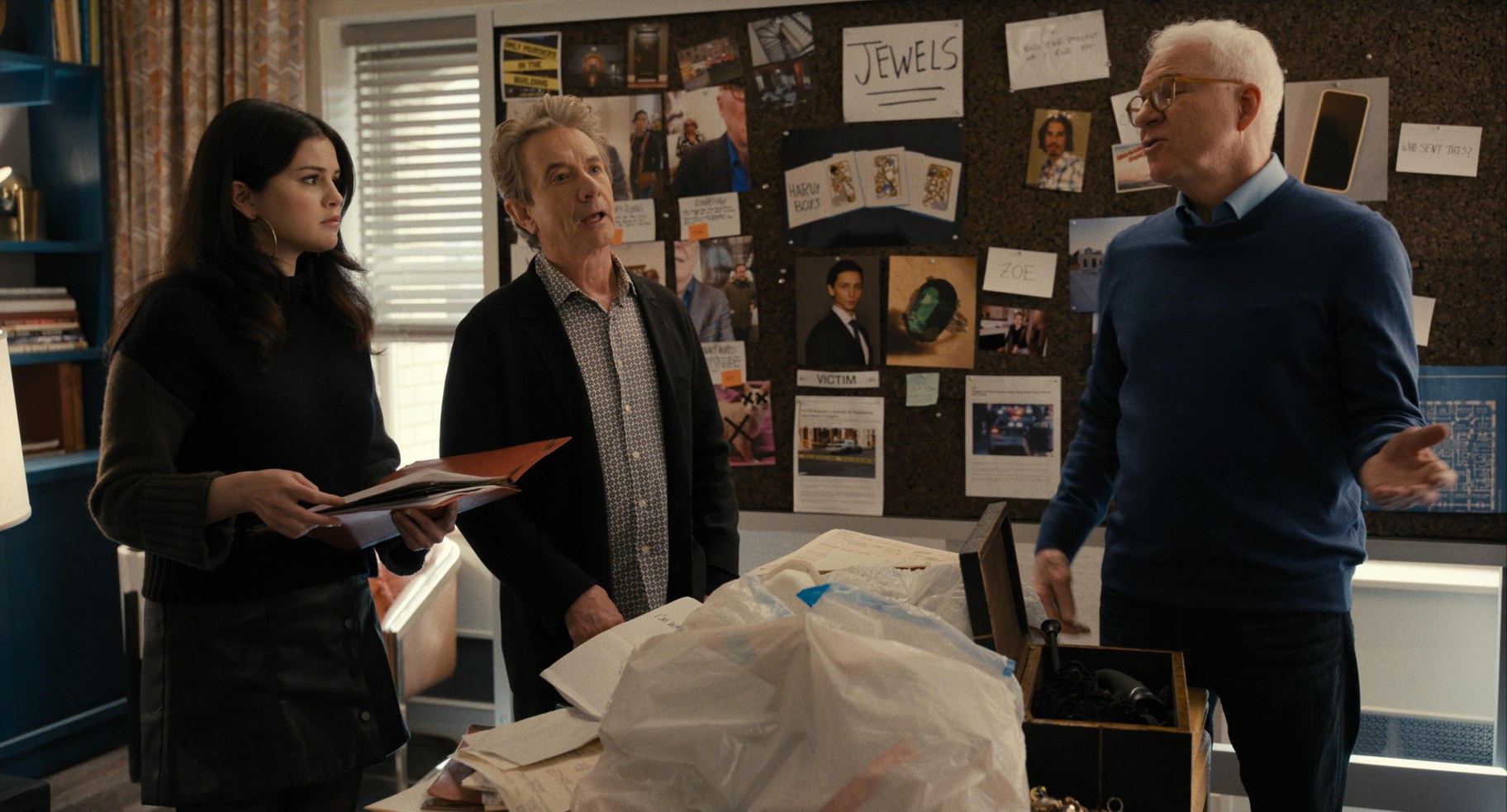 “I leaned heavily into Steve Martin at the very beginning,” to write that first episode, says co-creator John Hoffman. Selena Gomez (left), Martin Short and Steve Martin star on “Only Murders in the Building.” Photo courtesy of Hulu.

To help inform the show, writer and co-creator Hoffman leaned into a personal “true crime” story. He had a close-childhood friend, who, as an adult, was found shot to death. Hoffman says he experienced a “profound drive to understand” what happened to his friend whom he had lost touch with years earlier. “I could not fathom that as being the case. I knew he could never shoot anyone,” he says.

He went to Wisconsin to follow the investigation, and got to know his friend’s ex-wife and children, and met with a local reporter and neighbors next to the house where his friend died. “I just got obsessed with it, and I couldn't shake it emotionally,” he recalls. By the end of the year, the police report concluded that his friend had been murdered.

Also providing invaluable input to the series was Martin, who is a true crime aficionado. Hoffman remembers visiting Martin’s apartment in New York. There, Martin pulled him over to his kitchen to look across the courtyard to another window with a light on. Martin then asks him if could see the activity in the window across from them, and Hoffman answered, “Yeah, there's a man and his daughter, and they're having a little cracker?” And Martin said, “Yeah, that's not happening in that apartment. That's happening in the apartment underneath us. And that's the reflection on that window.’”

From there, Martin took Hoffman on a tour of his apartment building, walking him “through the intricacies that he had discovered and was interested in,” Hoffman says. “I leaned heavily into Steve Martin at the very beginning,” to write that first episode.

Pitching the show to Hulu

Martin and his co-creators took the show to Hulu without shopping it elsewhere.  Fogelman, their executive producer, who has an overall deal with Disney’s 20th Century Television, identified the streaming service as the platform for the show. Hoffman recalls that they had a script with a general arc of the first ten episodes and an ending, and that Dana Walden, the Chairman of Disney General Entertainment Content, was there to hear Martin’s proposal.

The pitch worked, and a couple of hours later, Walden called Fogelman saying they would pick up ten episodes.

Getting the show off paper during the pandemic

Though Martin has watched a lot of mysteries, writing one was a complicated task. He says he feels lucky though that they have a team of writers “to keep the story going.”

Because pre-production started during the pandemic, they assembled a team of writers on Zoom, which proved to be challenging. Hoffman explains that breaking up ten episodes of “a very intricate mystery,” required whiteboards, which wasn’t possible to do virtually. They also found it difficult to keep the focus alive, even when Martin, Short, and Gomez joined Zoom to read, to make sure that “they were clear, and that the mystery was compelling enough to have them on the edge of their seat not knowing which way it was going.” 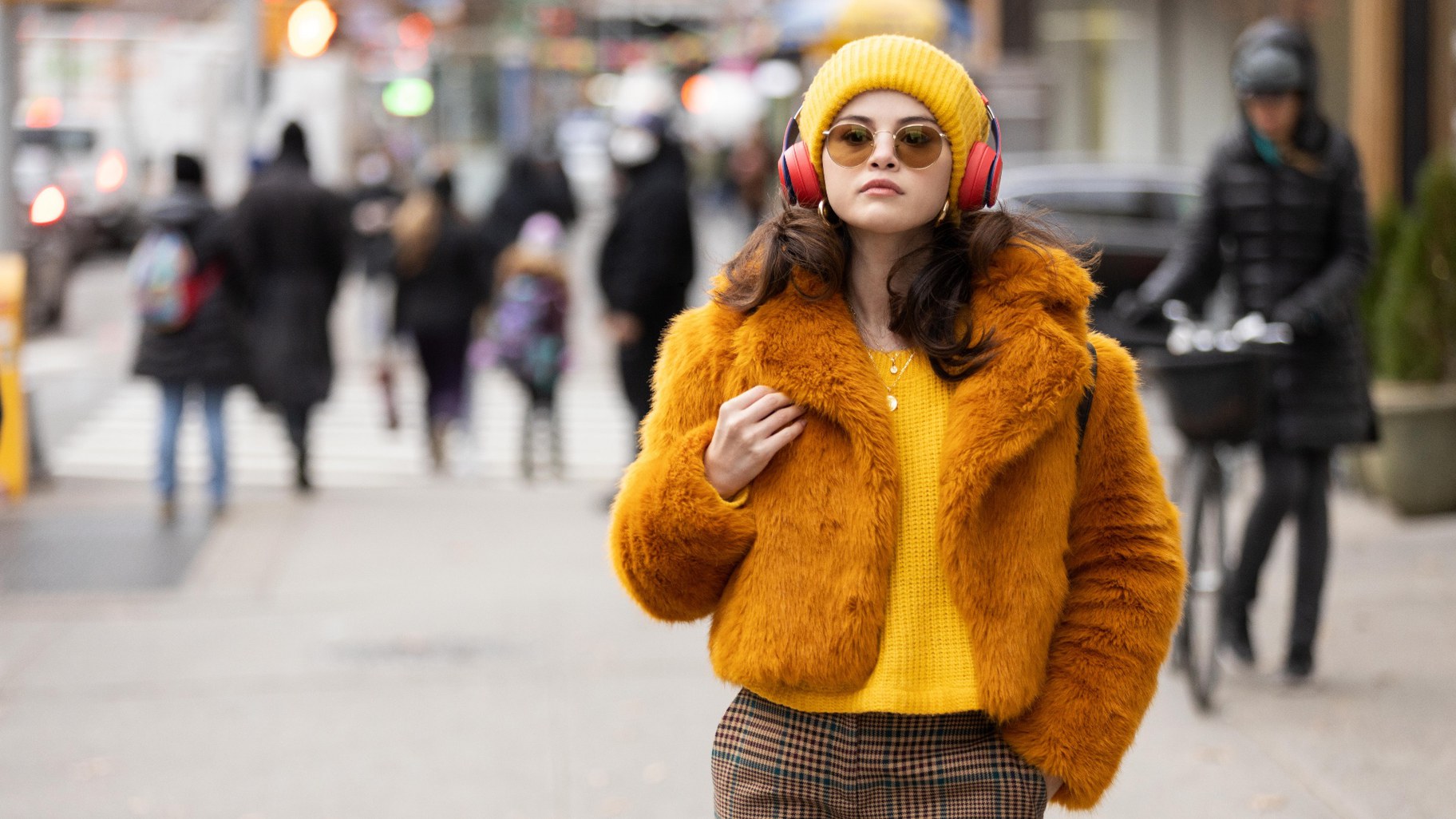 I can't even imagine the show without [Selena Gomez] now,” says Steve Martin, co-creator of the show. “Marty [Short] and I, even when no one's listening, say how great she is.” Gomez is shot on the set of “Only Murders in the Building” in New York. Photo courtesy of Hulu.

Adding Selena Gomez to the cast

The initial idea for the show was to have three old men protagonists. Martin, however, already expected the studio to say they wanted a young person in the mix. Fogelman suggested Selena Gomez for the third role, which Martin was a little skeptical at first because he didn’t know much about her.

“I looked her up when they first mentioned her name,” Martin says. “She's had a whole career that I wouldn’t know about, and she had done as many movies as I had. So she's a pro.”

Three weeks before they started shooting in New York City, Gomez joined Martin and Short for a reading of the show’s first episode on Zoom. “We heard the three of them for the first time together and our phones just lit up afterwards, and we were all buzzing,” recalls Hoffman. “Steve and Marty were both in my ear going, ‘She was unbelievable.’”

Now, Martin says he can’t imagine anyone else replacing Gomez. “We didn't realize how much Selena was going to contribute… because she brings us down to Earth, our characters, and [she] also has the right amount of snide. It just turned out to be perfect for us.”

“I have no desire to quit!”

Martin, who’s starring in a scripted TV series for the first time, loves being on show.

“I have no desire to quit,” he states. “I love working with friends that way. I love that it's being well-received. It's intriguing. It's like Steven Spielberg says, ‘I just make movies I want to see,’ and you're not second guessing yourself because I feel this is a show I'd like to watch.”

In the series, Charles-Haden Savage’s TV character Brazzos (played by Martin), sings the novelty song “Angel in Flip-Flops,” which Martin co-wrote and performed for the show.

The show’s success propelled Hulu to pick up a third season.

Warner Bros. Discovery CEO David Zaslav and his team axed “Batgirl,” the nearly-completed $90 million film. But is this a good strategy for the company?

“Only Murders in the Building” creators Steve Martin and John Hoffman discuss how Hulu’s comedy hit was conceptualized, and what it took to get it from paper to the screen.