It’s Independence Day Weekend, 1988. And Deirdre is celebrating the return of Glass Eye, her favorite independent act from Austin, Texas. They’ve just released their third album, “Bent By Nature.” But Deirdre’s allegiance to the band went much deeper than a catchy title. For her, they represented the very best of what Austin had to offer, which at the time also included “SNAP!” staples like the Reivers, the Wild Seeds, and Poi Dog Pondering. Glass Eye’s two principals, Kathy McCarty and Brian Beattie, say that whenever Glass Eye came to LA, Deirdre welcomed them with open arms and a sincere appreciation of their own bent nature.

Kathy McCarty: In general, the people in New York and LA didn't really want to hear too much about any other people from any other part of the country, especially the flyover parts. And so people would just have to create their own scene where they were, because we didn't live in New York or Los Angeles, and we weren't going to move there.

Brian Beattie: And it caused a lot of pride, and it made a lot of weird things happen.

Beattie: But still, there's something ... I don't know what the “Austin thing” was, because for me it seriously got warped and made more beautiful by the Butthole Surfers and Ed Hall and Two Nice Girls and things like that, y’know, ‘cause…

McCarty: Yeah, even though some of these bands went off in wildly different directions, we all started playing punk rock music here. And so it almost kinda became more like, we're just alternative bands. You know, we didn't really think of ourselves as like, “We’re representing Texas.”

McCarty: We started touring in ‘85.

Beattie: Right after the first EP, “Marlo,” came out. We did come to LA, but we came probably at least two or three times before we played on KCRW.

McCarty: Yeah. We were never huge in LA. We were much more famous in San Francisco. But as far as LA went, we were always just trying to get people to notice us. And so many people are doing that, ‘cause the suits live there. And people would stand out in the audience with their arms folded across their chest, going, "I don't know if this is cool or not." Y'know? But she made me feel like, A) I was worthwhile and somewhat famous (which, you know, was questionable), and that she really liked us. And she really loved our music, and made us really feel like we were doing her a favor, which ... you know, no one ever made us feel like that. [Laughs] 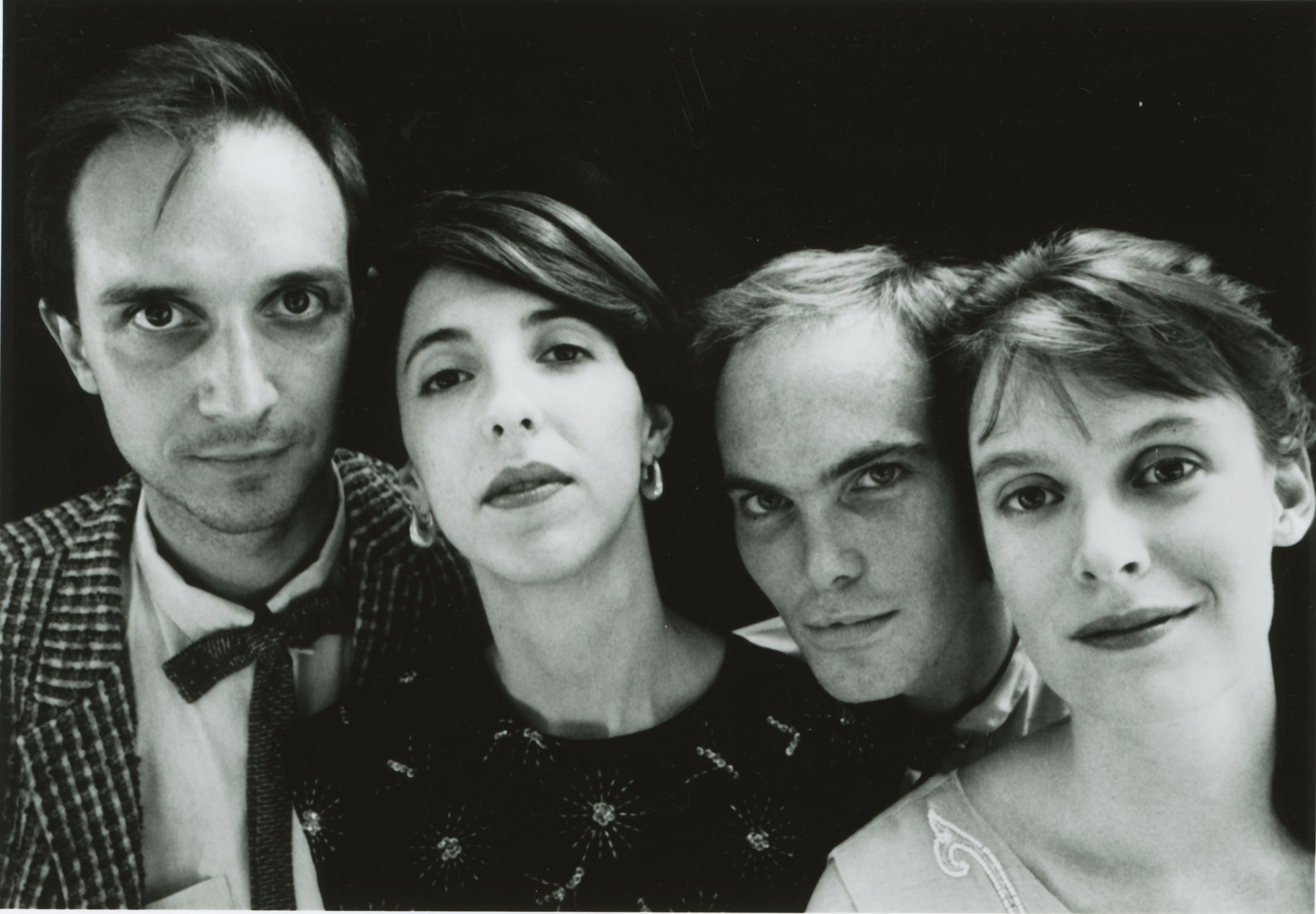 Beattie: We went to lots of different radio stations. And there were some times where no one knew what the hell was going on, but everyone was having a good time, usually. But it was very different at your place, because we were the kind of like, “load into a club and set up and play.” And you were like, “loading in and set up, and they're going to record now.” So it was kind of that live attitude, and we could treat it like it was a show or just be stupid or whatever.

McCarty: What I remember is that, after the first time appearing on "SNAP!," it felt a little bit like coming home when we went there, because it was this positive on our tour. It was always like, "Well, we're going to enjoy this, and this is going to be good. And here we are again. And we love this place. And we love her. And this is great." So it was always a high point for us. Because of Deirdre, we always did get a show in LA. We usually played at Club Lingerie, and that was not a bad room, and it was usually full of people that liked us. And that was all her doing, really.

Beattie: At Club Lingerie, Stella [Weir, keyboards] and Kathy said, "We're gonna go out and buy bustiers.” We went and played the show, and I was like, "You're gonna wear bustiers? You don't usually dress like that, but ... okay.”

McCarty: We were in costume!

Beattie: And people were paying a lot more attention than usual. There wasn't as much of the crossed arms. It was more of the kinda up-front, like, "All right! All right!"

McCarty: But it was gross. And we were like, "Okay, we're not gonna do that again.” But it seemed like a good idea.

Beattie: But it was the perfect place to do it.

McCarty: I guess. I was like, "We're disguised as the name of the club." We just thought it would be funny, mostly.

Deirdre O’Donoghue [1988-07-08]: Glass Eye, with a perfectly brilliant and utterly bent album entitled “Bent By Nature.” I'm entranced. Who came up with the title for this? You have to understand, I've used the word “bent” for a long time. The show, when it was on Saturday mornings, was unofficially called “Bent Music.” It's taken from the Randy Newman song: “We'll have a straight kid, we don't want a bent one.” It's just the stuff that's not straight.

McCarty: Randy Newman, what a genius.

O’Donoghue: There are some fine people operating on our planet right now. Including the four members of Glass Eye.

Beattie: I thought of the name. When you’re trying to think of a name for a band or a record, it's really tough, because everything sounds stupid when you say it at first. Everything. And we stuck with the stupid name for the band, but then we were looking for the stupid name for the record, y’know? I just wrote everything down on a piece of paper, and I'd kinda forgotten about it. And then my girlfriend mentioned it to me, and then I looked back and there it was. It was better than anything else, because our strongest other alternative was “The Donut Tree.”

McCarty: I didn’t remember us being that entertaining, but when I listened to it, I was like, “Wow, we really were entertaining!”

Beattie: The sound of us playing, and her introducing us, sounds like we were old friends or something.

McCarty: She really allowed us to flower on mic, I think. Because we were not always that charming or that funny. One thing I really liked about her was that her assessment of what our best songs were was the same as mine. So I was like, “Oh, she really gets it. That is our best song!” [Laughs]

And the best song that I recorded with Glass Eye was probably “God Take All.” It’s about this guy that broke my heart, or I broke his, or whatever the fuck happened. Anyway, he had moved to Los Angeles and married another. And he was driving down this highway listening to “SNAP!,” and Deirdre played that song, and he had to pull over and weep. [Laughs] So that was a real score for my life.

Beattie: That’s a high-success moment for a songwriter.

McCarty: One thing that’s true, when you’re in a band, is: You’re around the people that you’re in a band with far more than is remotely reasonable. So you’d better like those people. And I knew that going into Glass Eye. So that’s why I wanted to be in a band with my friends who I hung around with all the time. Plus, that they happened to play the instruments that I didn’t play.

But in general, I think that’s one of the things that made Glass Eye such a fun experience, was that we were really good friends. We were just really good friends who got along, thought each other were hilarious, and didn’t get terribly ... I mean, I don’t think we had a “band fight” ever where people were like, “I’m stalking out.” Apparently this is very common.

Beattie: And now we’re making a record together still.

McCarty: We still work together!

Beattie: And we think Deirdre was the most fabulous thing ever. We’re so glad you guys reminded us.

McCarty: I really do think she was the best DJ in America when she was doing it. Absolutely the best.

Glass Eye released their final record, “Every Woman’s Fantasy,” in 2006. McCarty and Beattie both still live in Austin. Beattie works as a record producer and runs his own studio, The Wonder Chamber. McCarty is at work on a variety of writing and musical projects, including some new music with Beattie.