Deirdre O'Donoghue (1946 - 2001) was the creator and host of "SNAP!," a late-night radio program which ran on KCRW from 1982 to 1991. O’Donoghue was the most influential American DJ you've never heard of, a day-zero adopter of countless artists, from Shawn Colvin to Syd Straw, from Ride to Lush, from Del Amitri to the Innocence Mission. She hosted Suzanne Vega’s second-ever radio appearance prior to the release of her debut album in 1985. She gave over her DJ chair to Tom Waits, Don Cherry, and John Zorn. Vaunted musicians would arrive in informal pairings, like Bob Mould and Vic Chesnutt, or Syd Straw and Marc Ribot. And she could find beauty in the explosive maximalism of Austin’s Glass Eye or the droll starkness of Lyle Lovett.

“No categories, no definitions, no pigeonholes,” she declared in January 1984, “just combinations of things that seem to go together.”

“No categories, no definitions,
no pigeonholes.”

“SNAP!” was O’Donoghue’s safe haven, but behind the scenes and off-mic, she could be mysterious. She didn’t like photos, and often hid behind a hat or a scarf. She was at odds with her bosses at KCRW and was briefly fired from the station in 1986. She was also highly protective of the show, refusing to share her playlists (nowadays required for rights and royalties reporting) with the Music Department.

But it was that same protective nature that made it possible to tell O’Donoghue’s story today. She obsessively taped her own show live from the board, creating a personal archive of over 1,000 cassettes. And she similarly insisted on keeping the reel-to-reel masters of every "SNAP!" live performance, believing that they were an acceptable form of compensation for her (otherwise unpaid) airtime. Without O’Donoghue's canny sense of history, none of these master recordings would exist today. (Many have circulated in bootlegged form, taped directly from the airwaves by fans. A select few have also been made commercially available by the artists.)

Prior to KCRW, O’Donoghue spent most of her career at freeform radio stations around the country. She started in Boston at stations WBCN and WNTN (1973-1974) before moving to WABX in Detroit. After two more years (1975-1977), she arrived in Dallas, where she spent her most commercial period hosting at adult contemporary station KMGC. In 1979, she moved to Los Angeles, where she fell in at two more freeform stations, KKGO and KPPC. (At the latter, she met her friend, "Le Show" creator, and occasional "SNAP!" fill-in host, Harry Shearer.) KCRW's Tom Schnabel, then-host of "Morning Becomes Eclectic," fortuitously heard O'Donoghue on the air and offered her a graveyard shift at the station, where she arrived in 1980 playing mostly jazz and blues. "SNAP!" premiered on Saturday night, December 4, 1982, and remained on the air until tensions over O’Donoghue’s unfiltered hosting style came to a head five years later. 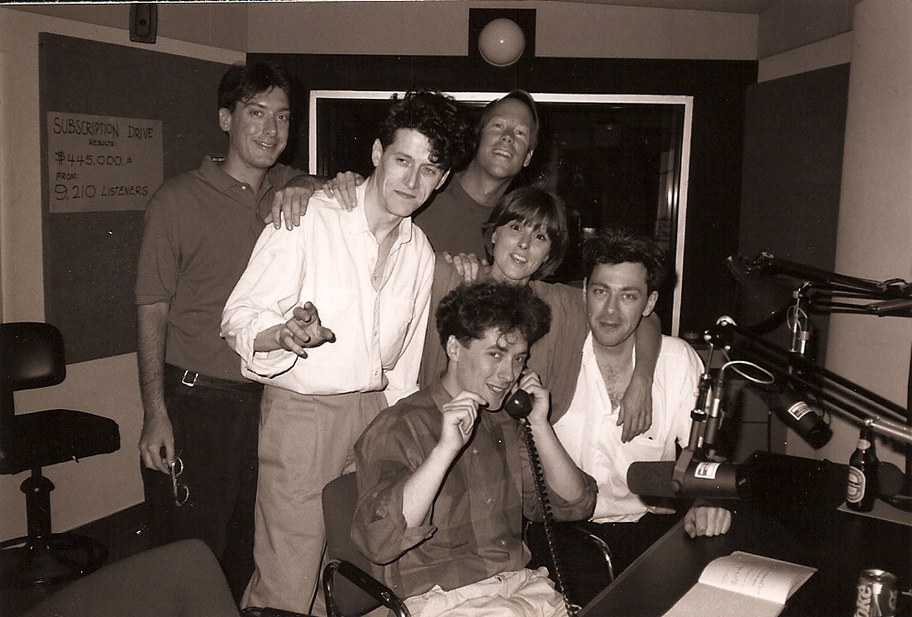 Deirdre O'Donoghue (center) with band The Blue Nile at KCRW's Santa Monica studios in the 1980s. Photo via KCRW archives.

On November 2, 1987, the LA Times' Patrick Goldstein reported that O’Donoghue had been unceremoniously fired from KCRW by the station's then-General Manager, Ruth Hirschman. "We'd really prefer that our music programmer stick to music and not review the war on Nicaragua or, for that matter, films or other records," Hirschman said. In response to the station's handling of the matter, DJ Brent Wilcox (a personal friend of Deirdre's) resigned live on air. After a period of diplomatic cooling, O'Donoghue returned to KCRW's airwaves on March 2, 1987, where she remained until June 1991.

Concurrent with her work on KCRW, O’Donoghue was the founding host of another cult radio show, “Breakfast with the Beatles.” She started the program at LA freeform rock station KMET in 1983 and remained there until 1987. The show thereafter went to KNX and finally KLSX. Arguably, if most people know the name Deirdre O’Donoghue, it’s through her association with "Breakfast with the Beatles." After “Snap Judgements,” the remaining years of Deirdre's life were spent in a more withdrawn state, as she became gradually more consumed by health problems. She died at home on January 20, 2001.

In an obituary for the LA Weekly on January 31 that year, O’Donoghue’s long-time friend Robert Lloyd wrote: “[Deirdre] was immune to hype, deaf to buzz, unimpressed by stardom, yet ever a sucker for talent and a pushover for the person who could move her soul. She was curious about what she hadn’t heard and democratic in what she played, without ever being merely, lazily “eclectic,” but mostly she played what she felt you just had to hear. She wanted you to feel what she felt. She was the girl in the song the music frees whenever it starts. She believed in magic. Absolutely she did. And she really loved her job.”