Scottish fraternal duo The Jesus & Mary Chain were the enfants terribles of the indie world in 1985 and 1986, known as much for their pointed hostility towards the press as for their chaotic and cacophonous sound. The band touched down at the Santa Monica Civic Auditorium on Easter Sunday, 1986, in support of their now-classic debut, “Psychocandy.”

Deirdre met up with the brothers Jim and William Reid backstage for a brief pre-show chat and found all the rumors to be true … although matters weren’t helped by her immediate misidentification of the band’s bassist for their drummer. This tape packs in more squirms per minute — along with charming moments — than perhaps any other interview in her vast catalogue, which may explain why it never went public. An enjoyably juicy episode from the Mary Chain’s earliest days in the U.S.A.

Detail from a poster for JAMC's Easter Sunday show in 1986 at Santa Monica Civic Auditorium, where Deirdre interviewed the band. Image via Creative Commons.

Deirdre O’Donoghue: I’m locked in a room with the Jesus and Mary Chain ... Now what's the current lineup? William and James Reid, but who's the drummer? It's not Douglas Hart anymore, is it?

Jim Reid: Douglas would be offended at that because Douglas is a bass player.

But it’s not Douglas either then, is it? 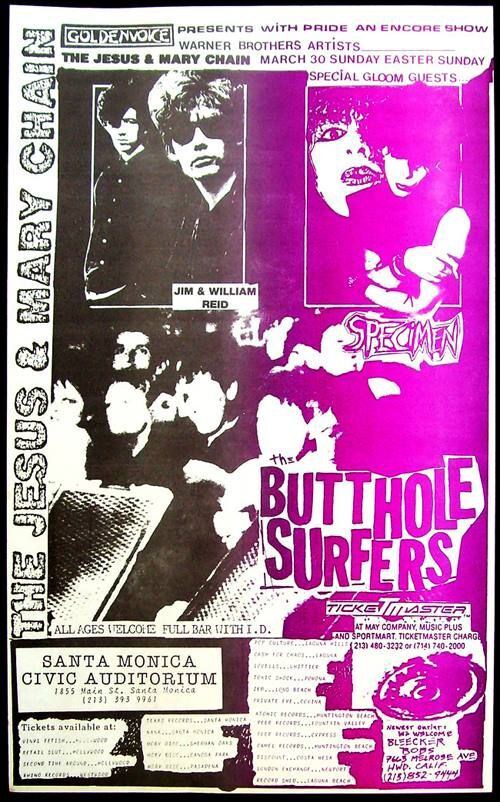 I’m a long standing fan of what you do, and watching other Americans kind of key into the music and make a lot of different descriptions for it, how do you describe the sound of what you do?

Jim: I mean, you don't really have to, do you? I mean, if you have to describe what you've done, I mean, what's the point of having done it, you know? The record doesn't need a description. It stands up for itself.

Well then, how do you feel about the different descriptions that have been made of your music?

Jim: They annoy me.

William: I don't like descriptions of the music, really. In a perfect world, we'd make records and nobody’d ever talk of it at all. People would just listen.

There's a lot of darkness in the music that you do. Where's that come from?

Jim: There's a lot of darkness everywhere, really, isn’t there? I mean, why shouldn’t that be the case in a pop music LP?

I like that. I think part of the reason that I like the music is that a lot of the sound is real familiar. ... How long have you been here, this tour, around now?

So this is, this is… [fumbles and pauses] It’s very much, this is early in the day for me. I’m a nighttime person. It sounds [like] pretty much the same show?

William: Yeah, I mean, [we’ve got] two new stage songs. The last time we did play “Sowing Seeds.” Or did we? I don’t remember … and “Some Candy Talking,” and that's a new song. We did probably do a couple of other songs. We've been so busy and [not] much time to rehearse or go through them. We’re not rehearsal type people.

It seemed to me as though the two of you were more aware of the fact that that auditorium was going to be full of people tonight than your sound guy was.

Jim: You're probably right. The sound man needs a good, hard kick up the bike seat. He’s not the perfect sound man for the Jesus and Mary Chain, but...

Who would the perfect sound man be?

Jim: Somebody would want to be in a group, who makes that kind of music ... somebody that wants to take part, really, somebody that — this is unkind to Dave, because Dave really does try.

A year ago ... the singles were just starting to come out, and you've taken, certainly, England by storm. You took all the NME critics’ polls, you topped all of that. The readers polls, everything was in it. And you're making quite an impact on America, at least from the critical side so far. How has that affected you?

William: That’s a difficult question to answer, that's asking for a self-analysis answer ... My life has changed materially. We’ve changed as people. I don't know, that's something I’d be able to answer in probably five years time. Right now I'm mostly living, so I don't know if I’ve changed, or am changing.

Are you having fun with it?

William: Most of the time I’m not.

Jim: People by nature are never contented. So you take anybody in the street and say, “You happy?” I mean, anybody tells me they are, they’re lying or they're taking drugs. It's as simple as that. I always wanted to be what I am just now. Now it’s happened, I wanna be something else, you know what I mean? I've accepted that I'm never going to be totally happy. What I'm doing now is slightly better than what I've done in the past. But it's not as good as what people think, “Oh God, travel the world in a pop group, you're reasonably successful, what an ungrateful bastard he is if he says he doesn't like it.” But it's just not what you think it’s gonna be. Nothing else. You get what you want, you want more. That’s the simple fact of life. That’s human nature.

So what do you want to do next? What's the “more?” What's in the future?

"I want everybody to say the Jesus and Mary Chain are the best group ever."

What about the critics who wonder if you're going to be around in a couple years?

Jim: I mean who cares. I don't really care what anybody else thinks or says, you know?

You just contradicted yourself though. You said you wanted everybody to think...

Jim: You're absolutely right. I'm talking about critics, of course. There's so much rubbish being written about “Psychocandy” and the group that people have learned to sort of think, “Well, who cares?” you know?

But the critics are kind of a bridge to you and the audience, right?

Jim: The critics are too important. The critics are silly little men that write about records. It's like, what happens is they’ll have their opinions, put it on a piece of paper, and everybody looks at it. What gives these people the right to say that their opinion is worth more than anybody else’s?

What about disc jockeys?

Are you working on writing new things? It's nice to know that I have use in life.

William: The next LP’s beginning to take shape. The songs are almost all written. And then what we’ve got to figure out now is how we’re going to record them. Which is a momentous task … It’s something I have to think in great detail. And then probably in a recording studio we’ll probably figure out what we’ve thought out.

Jim: I mean we really weren’t sure about “Psychocandy” when we first started out. That’s the way we work, going into the studio with the songs and see what happens.

William: When you go in, you have a vague idea of what the song is gonna sound like. And then when you actually start recording it, it sounds totally different. And sometimes it's pleasing. Sometimes it's better than what you actually had in mind. It’s horrible. We all hate recording. It’s such a make or break operation, really. It can be extremely depressing.

Jim: The feeling of satisfaction you get when you finish a record like “Psychocandy,” it makes everything worthwhile. I mean, I think it's the best thing that me and him ever did in our whole life. I mean, together we create “Psychocandy.” It’s a wonderful feeling. We did that. I know that if I wasn't in this group, I would think that record was a masterpiece. I've made a record that suits the taste of similar people to me. And that's fantastic.

Do you work at, or are you aware of, how sexy the music is?

William: Is it sexy?

It's incredibly sexy music. It's very seductive. Don’t you think so?

Do you know the band Black Flag, with Henry Rollins? When I first played the music for him, and he's a very aggressive performer on stage, he said “It's like a real handsome or beautiful person coming up to you, putting their arm around you, and twisting a knife in your stomach all at the same time.”

Jim: That’s a good description though, isn’t it?

William: It’s quite a psychotic description as well!

Jim: That description appeals to me. I know what he means.

Yeah, I knew exactly what he meant when he said it, because there's that incredible “come hither,” and there’s a terror. There’s a sense of of something very dangerous, of going down in a hole, living in a hole. But let me ask you this — there’s a couple of different places where you twist words around [that] I really like in “Just Like Honey,” where you say the hardest thing you'll ever do is, the hardest thing is walking back to you, and then you've got in “The Hardest Walk” about the hardest work you'll ever make is walking away. There’s a dichotomy there. But I really liked in “Just Like Honey” the way you twisted that around. Do you do most of the songwriting, William?

William: No, generally it's very even but...

Jim: “Just Like Honey” was a joint work, but the particular part that you're speaking about was due to William.

Where do the angry parts come from?

Jim: I mean, everybody's angry, it seems. “Psychocandy” is like a personality on record, you know? There’s nobody that’s the same person every day, every minute. And it’s like, that record is just, it’s a total reflection of our personalities, really.

You commented one time that you're “100 different people.” Who are you right now?

And who are you, William?

William: I’m more outward than I usually am. But to your average person, I just look meek and mild.

There's an interesting dichotomy in what you do, in that you're curled up on the floor with your guitar. You look almost like a little boy with a teddy bear. You look as innocent as possible, and you're ripping out the most extraordinarily wrenching feedback. Are you going to stay on the floor when you do concerts?

William: Sometimes I do and sometimes I don't. It all depends on the noise coming from the amp. Sometimes you just can't get a good noise unless you’re curled up on the floor, pointing the guitar towards the amp. I like to stand up and I like to actually face the audience, just to see who's actually come to see us. But it's not possible sometimes, not possible for a whole concert.

Who does come to see you? Who’s come so far?

William: It's just people. It's just faces. Faces, and haircuts, and clothes. That's who comes to see us.

I know what you mean, because when I go to a show... I mean, I'll walk around the hall tonight to see who came to see Jesus and Mary Chain, [to know] when I play the record, who am I playing it to? Any thoughts for Southern California? I was gonna ask you about your photography, but I won’t have time.

Jim: Southern California should listen to “Psychocandy” and learn some valuable lessons on how to make pop music.

William: Southern California could do a couple of winters.

With a couple of winters? No. God, no. That's why we're all here.