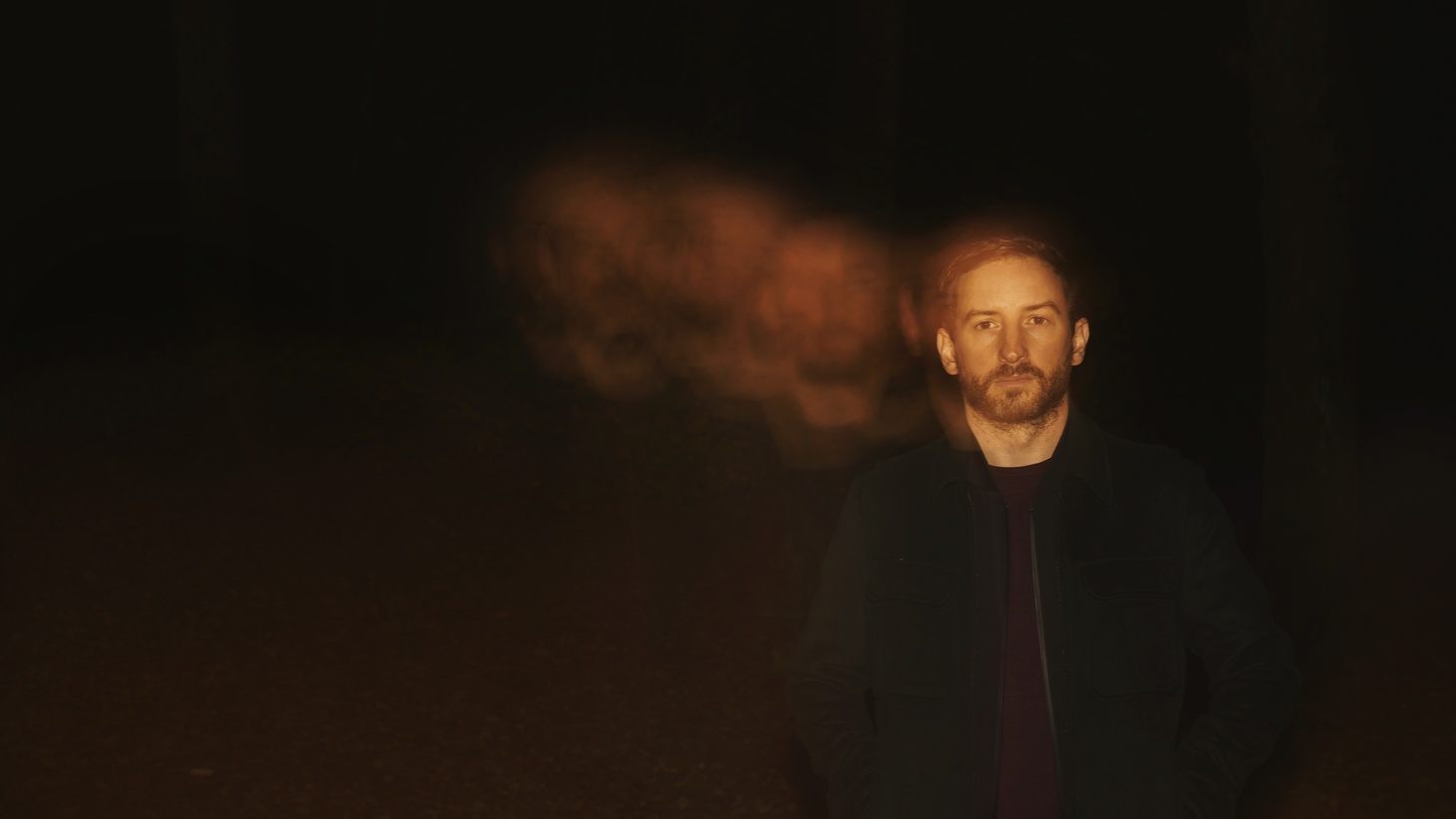 Max Cooper makes the kind of music that can make any mundane activity feel ten times more profound. Walking to the mailbox to drop off a letter? Not so exciting. Do it to Cooper’s music, and you're suddenly transported to a universe where the decision to drop the letter into the slot can feel like a monumental event could forever alter the course of your life.

His music works to similar effect scoring the McGloughlin Brothers’ 2020 short film “Swarm,” a surreal document of development’s impact on landscape in which Cooper’s sounds lend dimension and gravitas to images of freeways, farmland, and track housing.

With his most recent album, “Unspoken Words,” the London-based producer and DJ has cemented his place at the vanguard of electronic music, blurring the lines between techno, neoclassical, ambient, and experimental music to create a cinematic alchemy all his own.

In recent years, Cooper has earned a reputation for delivering an epic live show, replete with intricately finessed beats and textures in tandem with custom projection mapping that elevate his music to an immersive multisensory experience (he does hold a doctorate in Computational Biology, after all).

Cooper will soon bring that prowess to Lightning In A Bottle, the widely beloved electronic festival from good vibe purveyors the Do LaB, which makes its grand post-pandemic return May 25-30 at Buena Vista Lake in southern San Joaquin Valley.

But first, we’re giving you a taste with a richly complex DJ mix of cascading peaks and minimalist valleys Cooper composed exclusively for FREAKS ONLY. It’s a masterful intermingling of his own work alongside that of similarly innovative beat maestros, including KCRW favorites John Tejada, Dntel, and Trentmøller.

Cooper joined us via email to pull back the curtain on his musical and visual processes and share how his unique perspective came to be developed. We highly recommend hitting play while reading to heighten the experience, as only Cooper’s music can.

KCRW: How does your PhD in Computational Biology carry over into how you approach your music?

Max Cooper: It certainly gave me the self confidence to keep trying when all I could seem to do was make rubbish music. Doing research is difficult, and you have to keep going without certain guidance or knowledge that it will work out. Self taught music creation is similar.

Beyond that, there may be a deeper aesthetic link — science is full of structure and beauty, and so is music. They are both all about patterns, one in waves of air and one in natural systems. Pieces of music seem much like abstract natural systems to me. They have rules and interdependent moving parts, and can be understood intuitively after careful study. But of course, the two are very different, too. Music can’t be falsified.

Was there a song or artist that inspired you to make electronic music?

Who are your dream collaborators?

On the musical side, Björk and Thom Yorke. On the visual side, Dirk Koy, Chris Cunningham, and Alex Garland would top the list.

Your mastery of visuals in your live show is becoming part of your artistic signature. Do the visuals inspire the sounds you create, or vice versa?

It works both ways. Sometimes I make music entirely from visual cues, as with “Swarm” with Kevin and Paraic McGloughlin. The entire film was made ahead of any music. Sometimes I make music with visual ideas in mind and my visual collaborators come up with the mappings, sometimes we have a back and forth experimenting with new ideas on both sides to meet in the middle. All of these visual projects and collaborations are explained on each album website.

Are there any examples in your discography that you can point to where the visual idea altered the music?

“Repetition” was an interesting one, as I initially had a totally different piece of music, but when Kevin [McGlouglin] came back with the visual idea, it pushed me in a new direction entirely to find something that fit the concept and the visual form much more precisely, and ultimately was much more effective at delivering the message and getting people engaged.

Can you walk us through the process of how you marry sound to visuals?

There are a lot of very literal mappings in terms of the shapes of sounds, smooth vs. jagged, for example, on a very basic level. Those shapes map very naturally to visuals and vice versa. I did a project focused on those forms of shape mappings with Nick Cobby called “Fragments of Self,” which explains this one. There are countless extensions of those sorts of mappings when you start to delve into musical and visual structures, and then there's the more emotionally led mappings.

For me, every sound, piece of music, visual scene, and video has a feeling, and that's always been my guide for creating music, as well as working on visual collaborations. It's a largely intuitive process for me, but one where I've built a language over the years. I don't think there's any right or wrong really, you can build your own language, as every artist does. As with music, it's more about constructing a world based on what you love than it is about some inherent structure we all have to conform to.

Who are the artists that inspire your visual work?

“Koyaanisqatsi” by Godfrey Reggio and Philip Glass was a major influence, the work of Chris Cunningham with Bjork and Aphex Twin, Autechre, Plaid and the Warp audio-visual experiments, Eat Static, The Chemical Brothers, Ryoji Ikeda.

When you're making music, are you working through a process of matching feelings and thoughts to sounds?

Yes, that's my process. There's some feeling and/or idea/structure I'm trying to convey. I make a new sound and decide whether it matches up or not, throw it if not, keep it if so, and repeat. I think that's how most people make music, but more often with other ideas in mind, like making a party energy for dance music or singing about love for a lot of pop music.

On your 2019 album “Yearning For the Infinite,” you tackle technological advance and its impact on society. Do you feel like we’ve reached a tipping point with technology where the proverbial tail is now wagging the dog?

Ha, yeah sometimes it seems like the tech is the feature and the art is lacking, but that's a natural consequence of all the new doors opening to us at the moment. It will take some time for the art to mature and make the most of the opportunities. Better that way than in a stagnating, already optimized world of soft rock or something.

Can the internet and social media be tweaked to become a force for good that makes people happier?

Not as long as it's dominated by market forces IMO. It's amazing how we're manipulated to click and stare like animals. I do it myself when I have a spare moment, without much awareness of what I'm doing. Maybe we'll grow out of it, but I worry we're not evolutionarily equipped and the algorithms can always keep a step ahead. Maybe someone will build a social platform optimized for making people happy and we'll pay a subscription fee instead of being manipulated into consumption, but it's hard to imagine how they could compete promotionally unless we have some major overhaul of our value systems. Maybe we'll have the first digital revolution and overthrow the algorithms and find a new, healthier way. Or we'll just keep spending our lives watching meaningless videos and aspiring to owning expensive things.

As someone who spends a lot of time traveling through time zones to gigs around the world, what is one piece of travel advice (or gear) that you wished you had known about ten years ago?

Noise canceling headphones plus audiobooks have been the key for me. I'm often too tired to read, but non-fiction audiobooks just wash into the mind while I'm traveling and it's become a really important part of my ideas generation process. It's one of the only times I have to daydream and sit with ideas without any other time demands and online distractions.

When I let my thoughts be free like that, ideas constantly pop up and I just need to try and catch some and note them down as they pass. It's a funny feeling, how the ideas are seemingly already there stuck in the subconscious trying to get space to be heard. Ideas generation often seems to be more about letting the mind decide what to do rather than having conscious thought get in the way.

How is your preparation for a festival like Lightning In A Bottle different from a headlining club gig?

For my solo shows, I'm usually focused on visual setups with 3D projection layers and wrap around screens etc. Those are a technical challenge for me each time. Whereas playing a festival like Lightning In A Bottle, for me, is more about getting into the vibe of what's going on, and having enough musical flexibility to engage with how everyone is feeling and what is working then and there. There are so many unpredictable variables at festival gigs, I have to be much more flexible. It works best when I can have a party with everyone there and we can share the atmosphere together.