Cheryl Hyland, a.k.a. the Queen of Destruction, participated in the “Derby Divas” all-female demolition derby at the Irwindale Speedway. Photo by Rider Gardner.

Irwindale Speedway is home to NASCAR, hot rods, street stock, enduro drags, Formula D racing, and once a year, a unique event that is a brutal, magnificent thing to behold: the “Derby Divas” all-female demolition derby.

It’s a smash-em-up event powered by women looking for a high-adrenaline night of destructive mayhem — all to benefit breast cancer research. Some drivers are first-timers, while others are derby veterans whose allegiance to the track has become a lifestyle.

And then there’s Bekkah Doyle, who’s been through a wreck that had nothing to do with a demolition derby.

“For me, it feels like I’m the underdog in every event because I’m a demo derby driver with PTSD in a car accident,” says Doyle. “What an oxymoron, like, that makes no sense. So I feel like every time I get in these cars, it’s a bit of a redemption for myself. Almost like an F-you to the guy who hit me.”

If the cure for being hit is to hit back, there will be plenty of opportunity for therapy. It’s an all-out battle for mechanical survival between 13 females in 13 cars. 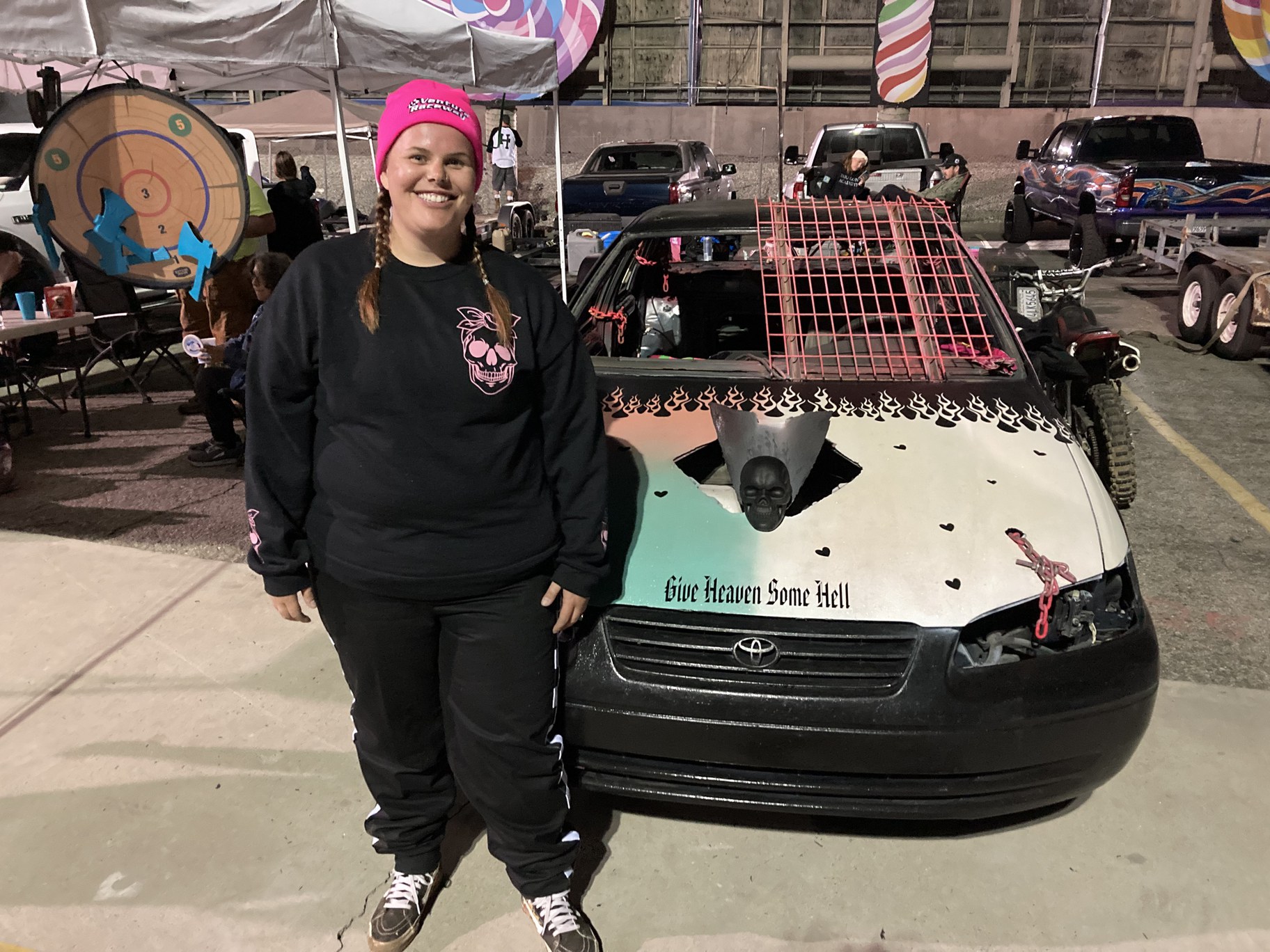 Bekkah Doyle in a mood to give heaven some hell. Photo by Peter Gilstrap.

It’s a Thursday night, and the Irwindale Speedway grandstand is filled with men, women, and children — thousands of people united by a hunger for destruction.

After a full evening of standard races — meaning cars that just go around in circles real fast — the place is humming with energy. The air smells like a mixture of cotton candy vape smoke, gasoline and real cotton candy.

In the pit behind the track, the Derby Divas stand around their cars under the lights, bored and nervous.

Their crews of friends and family members make last-minute tweaks to the aging rides — Nissans and Hondas, Fords and Buicks — making sure they can run one last time. 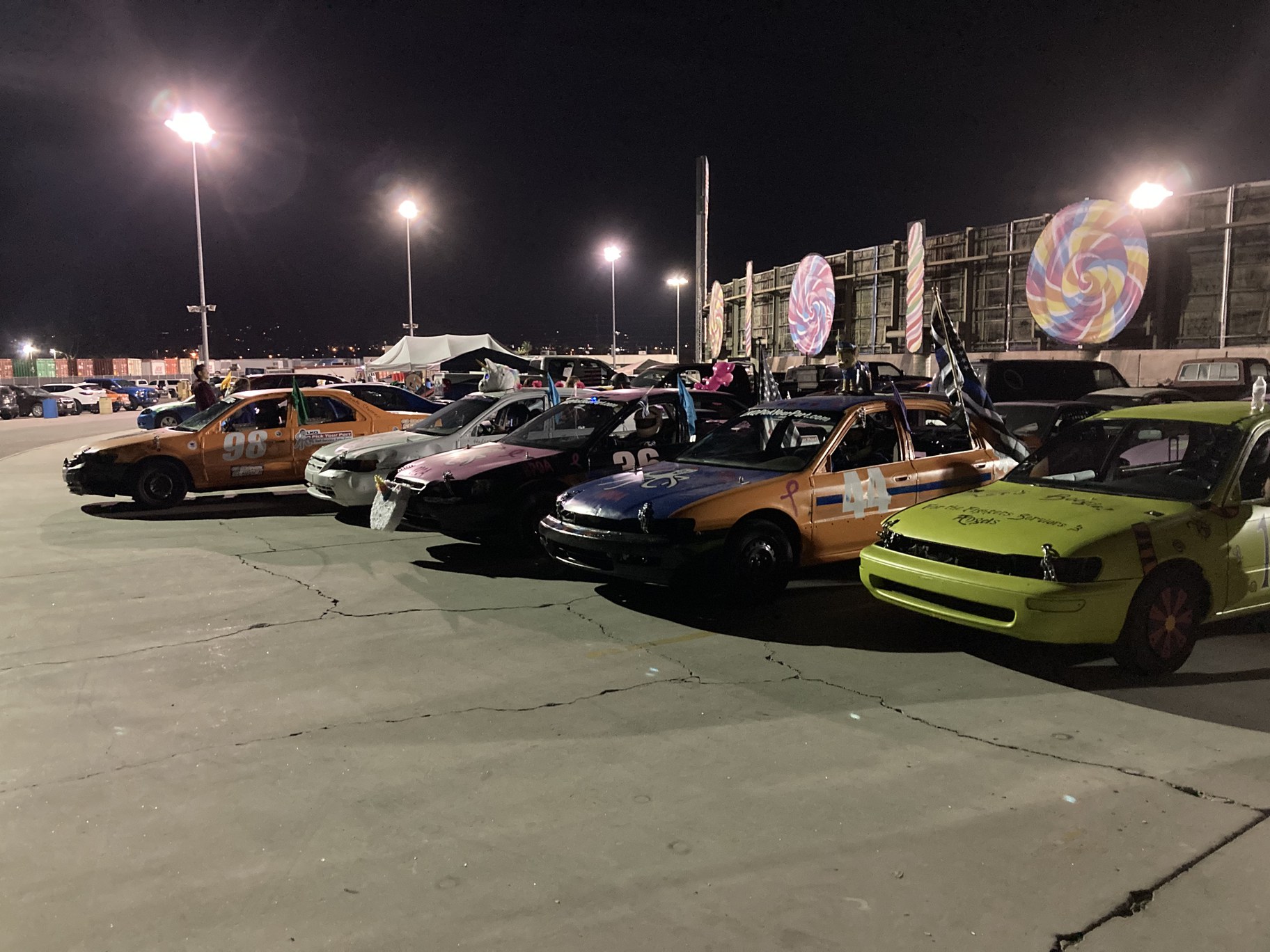 The Derby Divas line up their machines, set for destruction. Photo by Peter Gilstrap.

They need to survive through 20 minutes of sheer driving hell.

“That one, this one, they all have the ‘check engine’ lights still on because these literally come from the junkyard,” says Cheryl Hyland, a.k.a. the Queen of Destruction. Her vehicle has enormous eyelashes on the front. So does Cheryl. “That’s my signature!”

Each car is decked out with the driver’s personalized touches. They look like small, discount parade floats.

“We get to paint ‘em however we want to,” Doyle says. “That’s always my favorite part — is decorating them. I like to put a little sparkle on my cars. And then we just go out and destroy them. 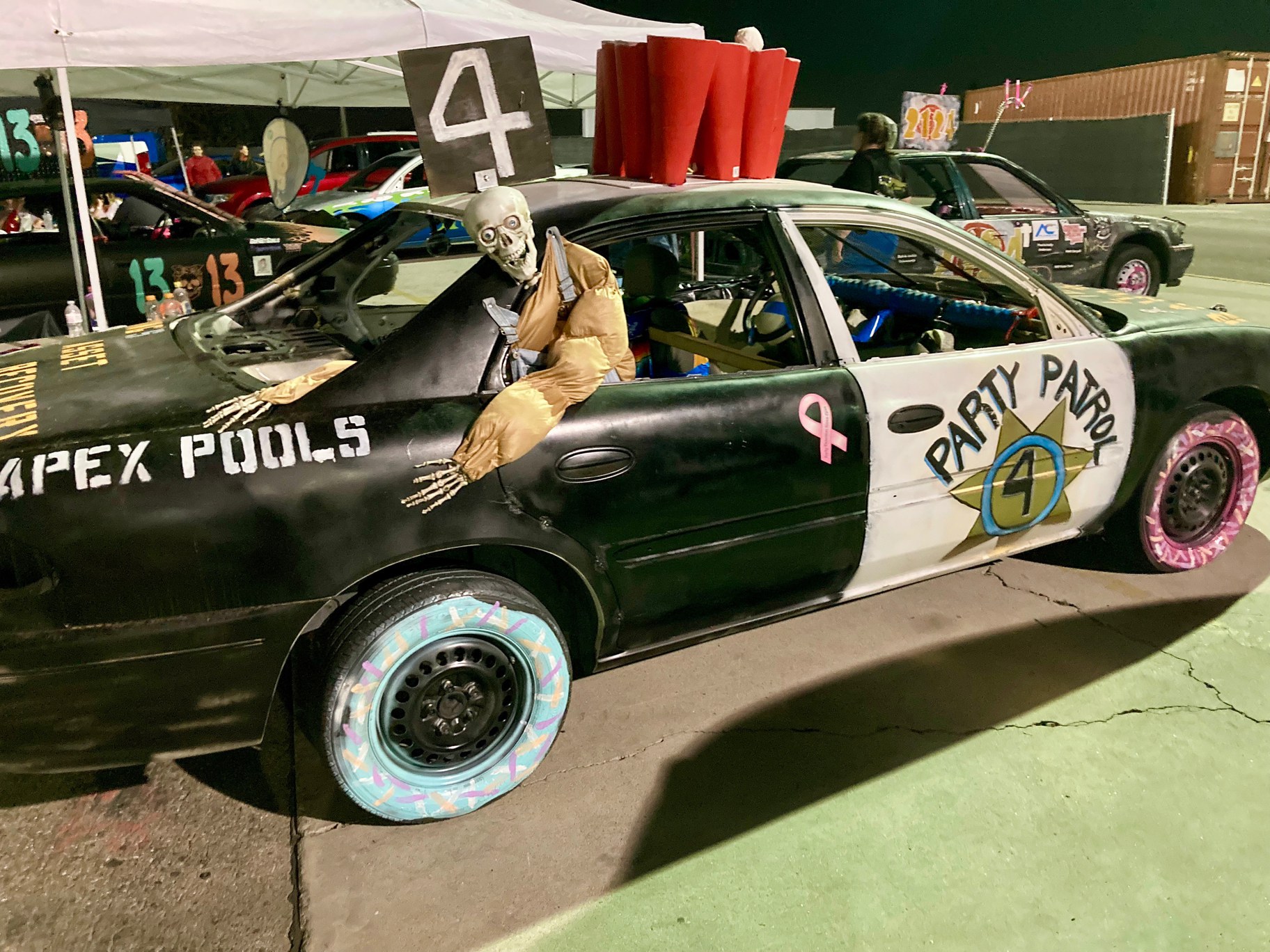 You have the right to remain partying. Photo by Peter Gilstrap.

There’s a Buick Century painted up like a cop car. It says “Party Patrol” on the side, with big red beer pong Solo cups stuck on the roof. A human-scale skeleton in overalls and a down jacket is trying to escape from the back window. His eye sockets light up and blink.

That thing over there? That’s a compact Toyota built up like a camouflaged tank.

Hyland has a massive inflatable pink flamingo crowning her matching pink Accord, and Doyle has a black skull on her hood. There’s also a car with a furry, life-sized unicorn head mounted on the roof.

It all seems like part performance art, part Viking funeral.

“I always think it’s really funny that somebody went to the car lot and bought this car brand new, really excited, and they had no idea this is the send-off it’s gonna get,” Doyle says. “It’s gonna get crushed, and people are gonna watch it. They probably had great memories in this car.”

Nicole Emma stands next to her machine — the Buick Party Patrol. This is her second derby, but what made her want to start doing this.

“I ran out of other crazy stuff to do,” she says. “I’m not married, no kids. All the times you wanted to just slam into people on the freeways? You can do it here. So, it’s a lot of aggression getting released.”

Maria Lynk is new to all of this. “It’s my first derby ever,” she says. “My dad used to take us to the track when I was really little and from the beginning it was, ‘I wanna do demolition derby!’ I told him, ‘Daddy, this is more fun than Loony Tunes!’”

For Bekkah Doyle, the derby is as much about healing as anything else. “In 2019 I was on the 101 freeway, and I was in dead-stopped traffic, and a car never stopped, never saw the traffic, and he hit the rear end of my car going 50 miles an hour,” she says. “And that left me with substantial injuries, but it also left me with very severe PTSD in cars.”

Doyle tried talk therapy. She tried anti-anxiety meds. Then she had a breakthrough idea. Demolition derby.

“I’m just gonna try it. I’m just gonna see if this helps, if I show myself that I can have all these extra car accidents and walk away from it and be okay, maybe this will change things for me.”

“To me it means the world,” Doyle continues. “Because there’s so few women in this sport and in motor sports in general, so it’s very empowering to come together with women that are similar to you, have a similar interest. It’s rare to find people like that. I think if I were to go up to a random woman in Target and be like, ‘Do you want to drive in a demolition derby with me?’ They’d think I’m missing all my nuts and bolts up there.”

Tonight’s event is unique. Most demo derbies are populated by men.

“You definitely get some double looks, like, ‘There’s a woman out there.’ Like, that’s different, you’re different,” Doyle says. “I welcome it because when I was a little girl, there were no women for me to cheer for. So it helps me want to even drive better knowing I’m the person those little girls in the stands are looking up to that day.”

“I think [women are] more aggressive,” says Cheryl Hyland. “I’ve been in co-ed derbies, I’ve seen ‘em. [Men] kinda chase each other around. I don’t know what it is — hormones? We just have something to prove, we’ve got a lot of pent-up anger. I don’t know, but we just go out there and let it go!”

And now it’s time to let it go.

The drivers put on their helmets and climb into their vehicles. Literally. The windows have been removed and the doors are welded shut. Other than the driver’s seat, inside, the cars are stripped of everything.

They line up in formation, gun the engines and head toward the field of battle.

The cars are cordoned off in a small area in the middle of the track for maximum contact. There’s nowhere to hide. And you can’t just sit. You’ve got to keep moving or risk disqualification.

They’re ramming each other in reverse and slamming head-on. 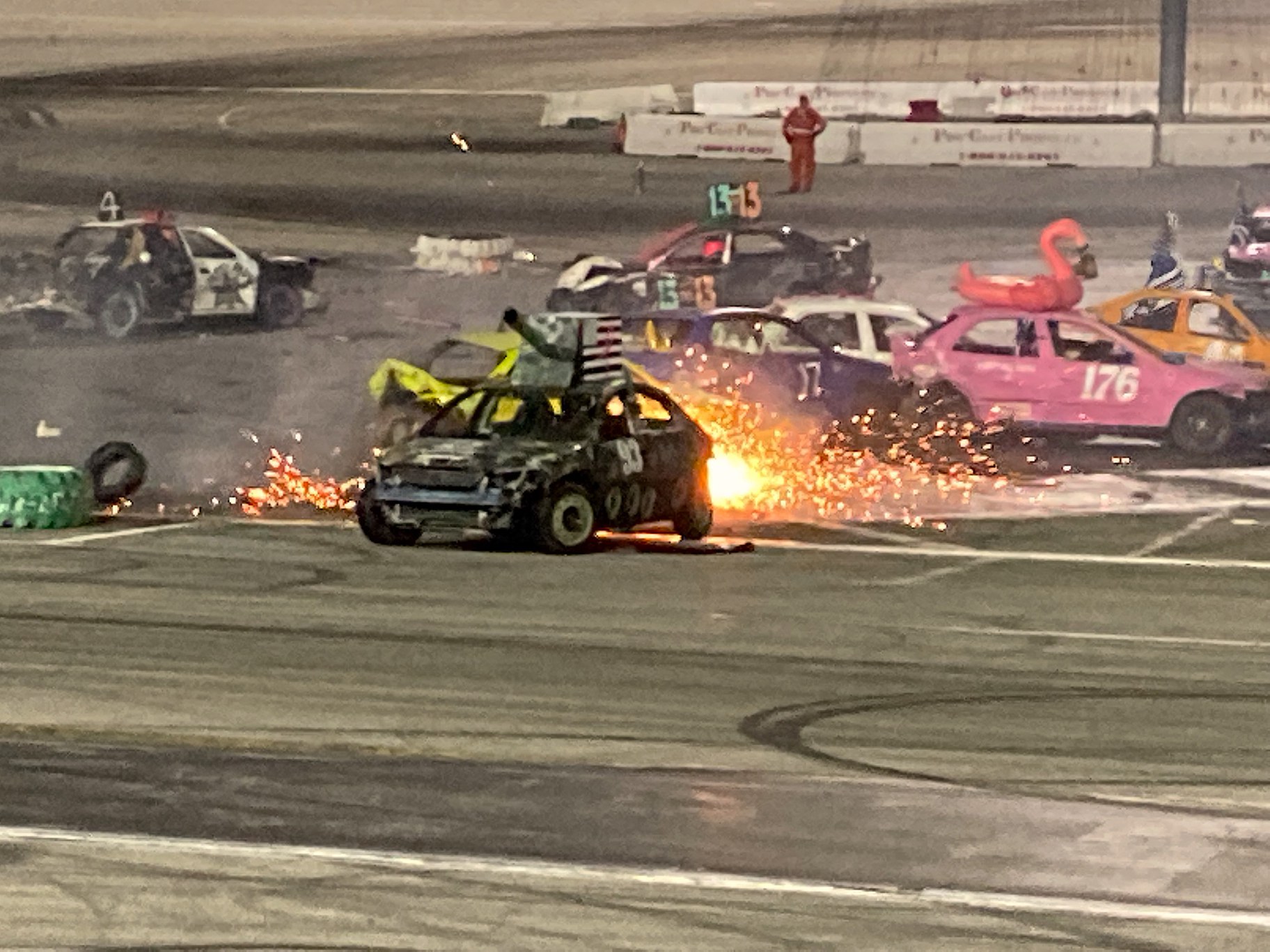 The ladies bring the destruction. Photo by Peter Gilstrap.

One by one, the cars die off as the field narrows.

Now thick red curtains of sparks spew from the underbellies of the few remaining rides as they make wretched sounds you just never hear cars make in real life.

The crowd laps it up like ancient Romans as the clock ticks down.

Derbies usually end just like a pistol duel or America’s Next Top Model — the last one standing is the winner. But this derby is timed out, and judged on battering skill and demolition finesse.

And as the smoke from dead engines drifts across the track littered with twisted auto parts like a Mad Max battlefield, the winner is declared.

As the crowd chants “Jessie, Jessie, Jessie,” fireworks explode in the air and the PA blares “Sweet Home Alabama.” Nicole Emma appears through the mayhem grinning like a prize winner.

So how was it?

Bekkah Doyle didn’t win, but she’s not going home empty handed. “I drove that car hard,” she says. “I lost my front tire, so I was sparking up a storm. I kinda became a human sparkler, but doing the demo derby helped seal the deal to take the next step in my healing progression.”

The LA Zoo, which is inside Griffith Park, is involved in animal conservation, and it has helped bring back the California condor from the brink of extinction.

Librarian Glen Creason retires from the Central branch, and read part of his farewell love letter to the LA Public Library. From Greater LA and KCRW.