Glen Creason presents a historic LA map on his last day at work on Friday, October 15, 2021. Photo by Keith Kesler/LAPL.

On October 15, librarian Glen Creason turned in his ID badge at the Central branch of the LA Public Library, and then entered retirement. He spent more than half his life at the reference desk in the History and Genealogy Department, and saw a lot in those 42 years. 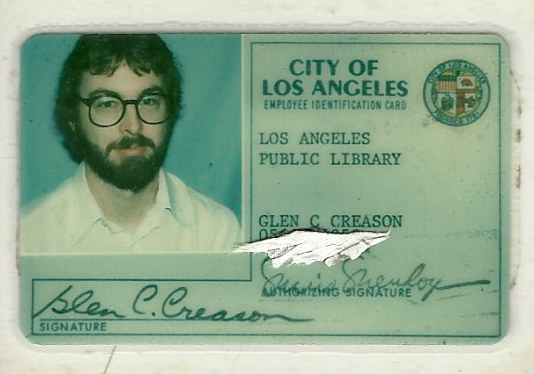 Glen Creason’s ID badge from 1979, when he began working at the central branch of the LA Public Library in downtown LA. Courtesy of Creason.

When the time came to leave, he put pen to paper and wrote a farewell.

“I was feeling really melancholy about leaving,” he said. “So I wrote this as sort of therapy.”

KCRW asked Creason to read part of his love letter to the LA Public Library:

“I’ve had the rare vantage point of viewing downtown Los Angeles for four decades. Not as a journalist or a reporter, but serving from a cultural crow’s nest. Until last Friday, I was a reference librarian in the History department at the Central Library, smack in the middle of our metropolis. Over the years I’ve seen, heard, and smelled the big city like few others. I’ve met movie stars, music legends, famous writers, powerful politicians, and even a serial killer.

I spent more than half my life in that quirky building at Fifth and Flower. It’s almost embarrassing to say, but I loved my job, and mostly looked forward to coming into dear, dirty downtown to experience Los Angeles from the neglected broken hearts to the pinnacles of human achievement every workday. I had the privilege to sit at a reference desk for over 40 years, watching my neighborhood away from home change, sometimes spectacularly, but often grotesquely. I was so proud of my workplace, so ready to announce I worked at the big library downtown that it broke me in two when the place burned in 1986. Most of my fellow workers survived, often painfully, and when the grand old dame re-opened in 1993 it was one of the happiest days of my life. I settled into my cubicle, then blinked, and here I am.

I’ve been here for eight presidents, give mayors, many numbers of Microsoft Windows, 3 Dodgers World Championships, 11 Laker crowns, flip-phones, and smartphones, subways, a spectacular Olympics, a book, and the birth of a wonderful daughter. There were also the dark times of two catastrophic fires, the AIDS epidemic, the LA uprising, 9/11, a mental health sinkhole, and COVID.

This grand old library was my refuge and inspiration through deaths, divorce, and depression. This precious Village of Central has been tested, but always held together by folks who share my love for the true value of the old beauty.

There’s nothing quite like the variety in the ridiculous to the sublime public who visit libraries. I’ll miss the unpredictable curiosity of my patrons. Once I could rattle off “the Mausoleum of Halicarnassus” as one of “the Seven Wonders of the Ancient World” or patiently explain that I found no evidence that Columbus was wearing cuff-links when he discovered America. I learned so much from all of these inquiring Angelenos that classrooms could never come close to these 500 months of instruction. There were plenty of inquiries I could not satisfy, the existence of the Nazi tarot deck, the location of the Lizard People’s golden tablets, the Jesuit maps of Los Angeles, I knew how crazy people were long before the internet made it crystal clear. 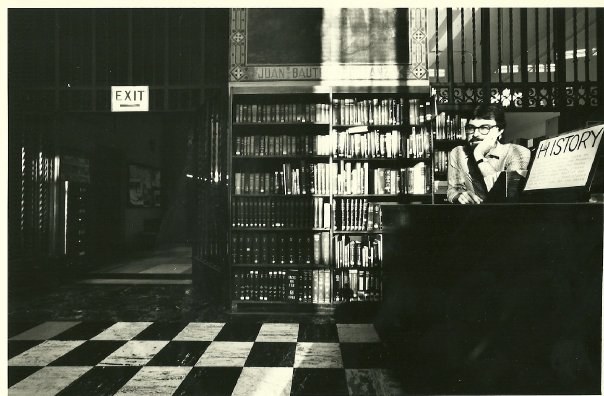 Creason sits at his perch in the History and Genealogy Department in the 1980s. “The internet was a rumor and connections between ideas and subjects were in the heads of librarians,” he writes. Courtesy of Creason.

More than ever I’ll miss those moments before the doors open and I had the old library to myself. It's weird how the smell of musty books can be soothing, even sensual sometimes. Susan Orlean described how the village of Central continues beautifully in her book but the power of standing amidst the wisdom of our justifiably maligned race is an experience for the lucky few. As John Prine sang, “How lucky can one man get?”

Touching on the true life of this library causes a great wave of nostalgia, a bittersweet longing for those deep friendships shuttered by death. Yet, it’s time to dim the lights in the rotunda, close the great iron doors on Fifth Street, and leave tomorrow to another lucky soul.” The LA Zoo, which is inside Griffith Park, is involved in animal conservation, and it has helped bring back the California condor from the brink of extinction.

Librarian Glen Creason retires from the Central branch, and read part of his farewell love letter to the LA Public Library. From Greater LA and KCRW.