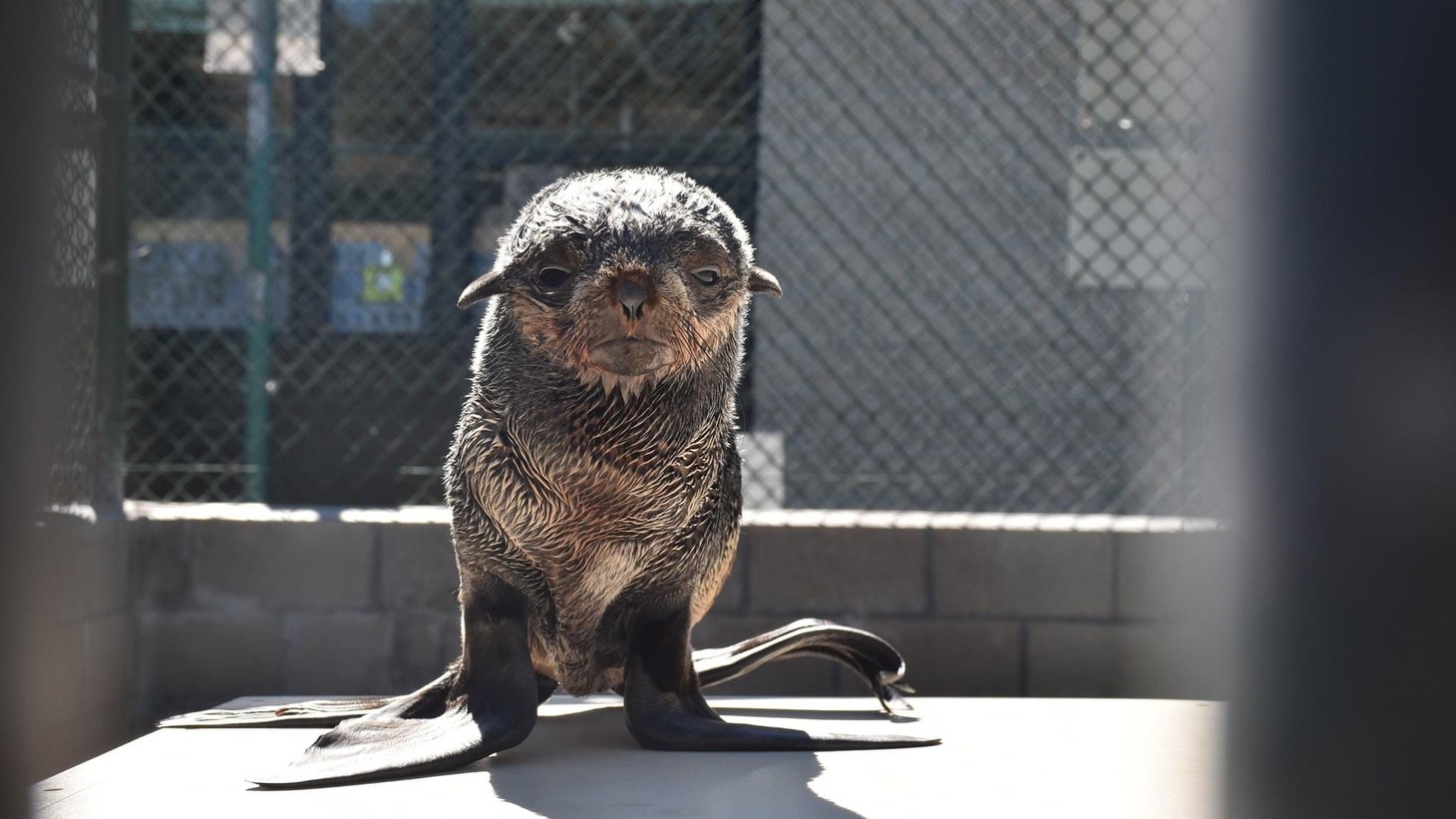 A young northern fur seal curiously looks out of its pen at the Marine Mammal Care Center LA in San Pedro. With its oval face and pointy ears, the seal looks a bit like Yoda from “Star Wars.” Photo by Susan Valot.

After a financial crisis in late 2019 and a temporary loss of volunteers during the pandemic, these days the Marine Mammal Care Center Los Angeles in San Pedro is a hub of activity where veterinarians treat sick and injured marine animals from throughout LA County.

Even though this is the slower time of year for the center, it’s cacophonous with about a dozen California sea lions, elephant seals and northern fur seals that sound like everything from a chicken to a howler monkey to Jabba the Hutt. 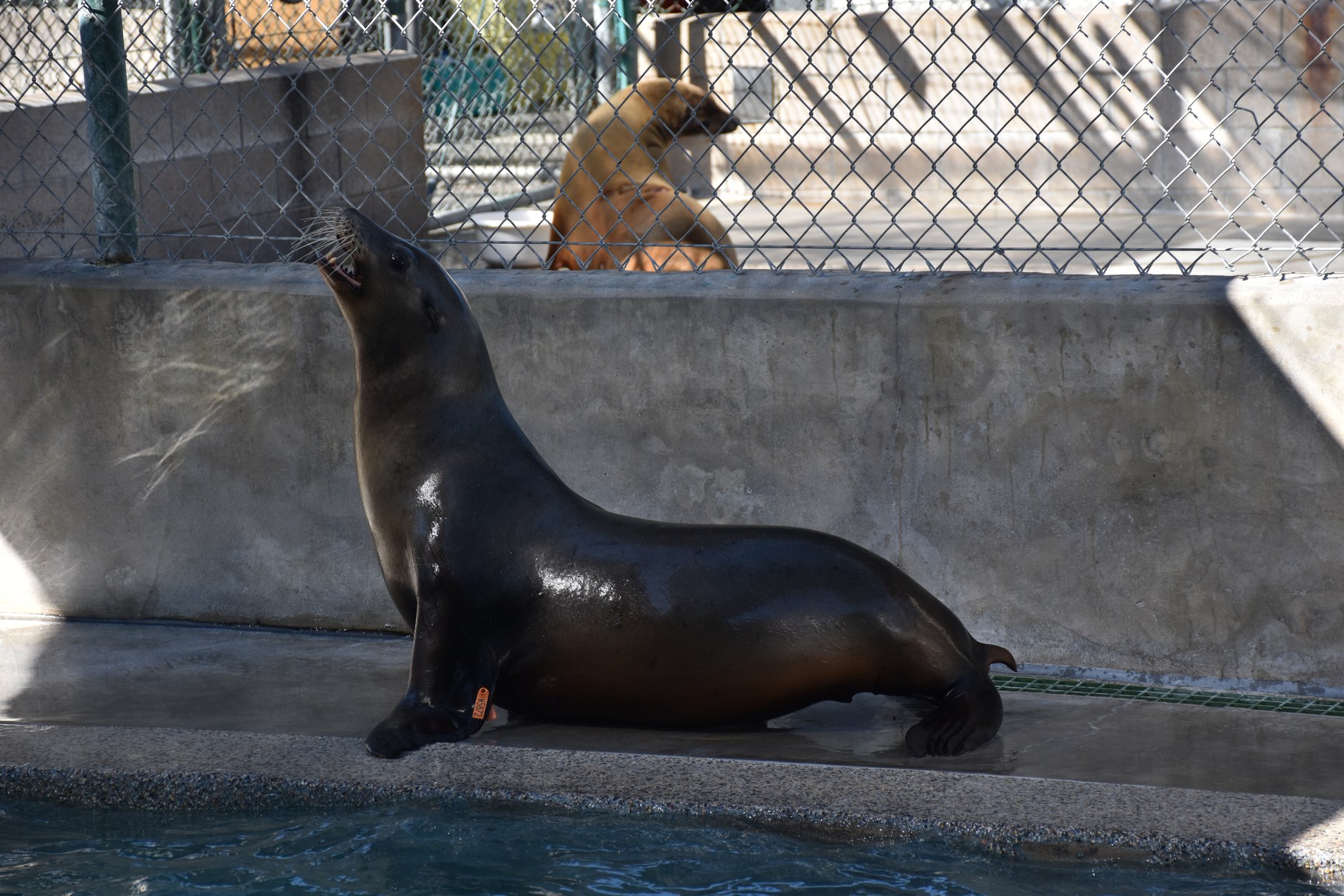 A California sea lion barks beside a pool as it recovers at the Marine Mammal Care Center LA. Photo by Susan Valot

The animals lounge, swim and recover in chain-link pens outdoors that are open to the public for viewing. The center is the only marine mammal rehabilitation facility that is open year-round in Los Angeles. (Another facility in Malibu takes on marine mammals during the busy pup season in spring and summer.)

The marine mammal center, which first opened in 1992, came close to closing before the pandemic due to financial mismanagement.

“We weren’t quite out of that when the pandemic hit and so just like so many people did, we cut back everywhere we could,” says Lauren Palmer, the center’s director of hospital operations, who has been overseeing the care of animals here for about 16 years.

The center’s new CEO and president, Amber Becerra, who came in right before the pandemic started, cut the budget from about $1.6 million to $1 million. The team scrambled to raise money to save the center, which is now on more stable ground.

During the pandemic the center, which relies on an army of volunteers, closed to the public for almost a year. Palmer says they were lucky that at the time they had one of the lowest caseloads of the last two decades. 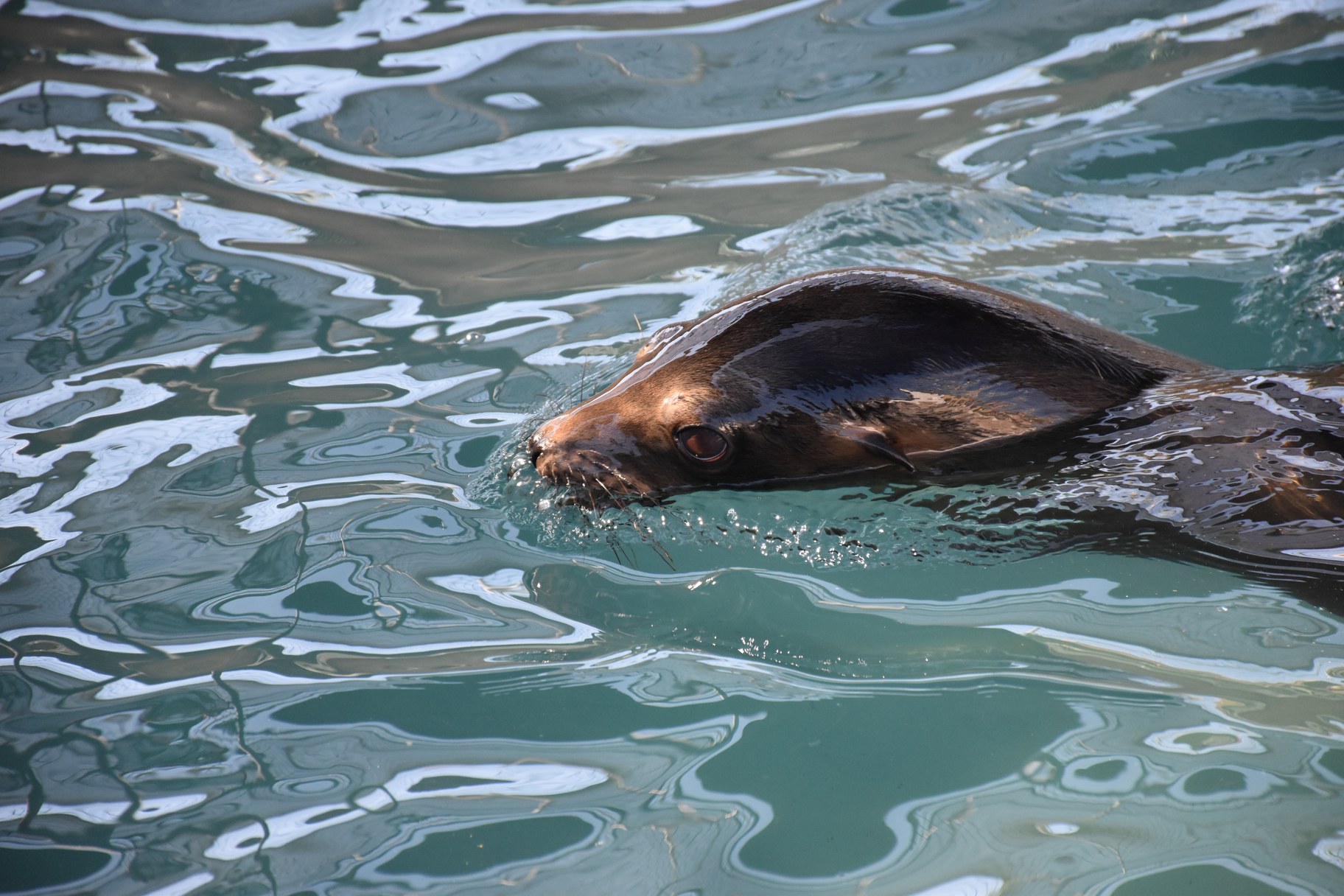 A sea lion swims in the largest pool at the Marine Mammal Care Center LA, which can see its patient population balloon to close to 100 animals during busy seasons. Photo by Susan Valot.

One of the northern fur seals came to the center from a similar facility in Ventura that had to be evacuated when the Alisal Fire in October got too close. Another has an injured back flipper. The pair have now bonded, and once they re-learn how to fish, they will be released back into the ocean as a pair.

An elephant seal, with its characteristic snout, lounges in a pen next to the fur seals. 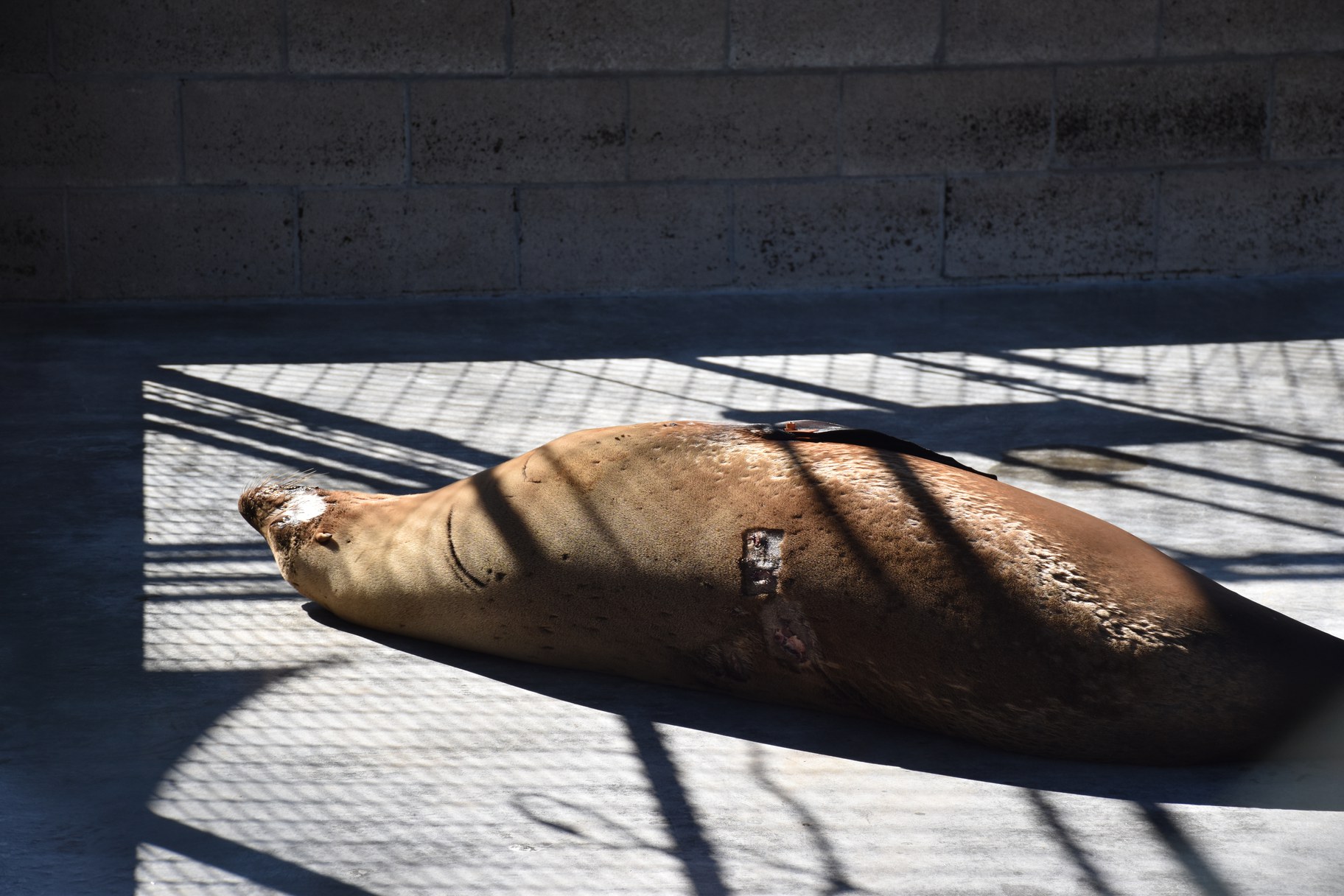 An elephant seal came into the Marine Mammal Care Center LA with a shark bite injury, but was also treated for a lung worm infection. Shark bites are a common injury this time of year. Photo by Susan Valot.

“You can see the little scars, the little puckered areas. So those were scars that were created by a cookie cutter shark. They’re typically a deep shark and they just have these really sharp little circular mouths, and they latch onto the animal and they just take a plug of skin and blubber and they leave a circular lesion. It’s quite characteristic,” says Palmer. “So he was seen on the beach. He was in thin condition and he came in for those wounds.”

It turned out the elephant seal had a lung worm infection that was a bigger problem than the shark bite – both common maladies at the marine mammal care center.

So they treated the elephant seal’s wounds, dewormed him and he doubled his weight with regular feedings. The animals here chow through 150,000 pounds of fish each year. 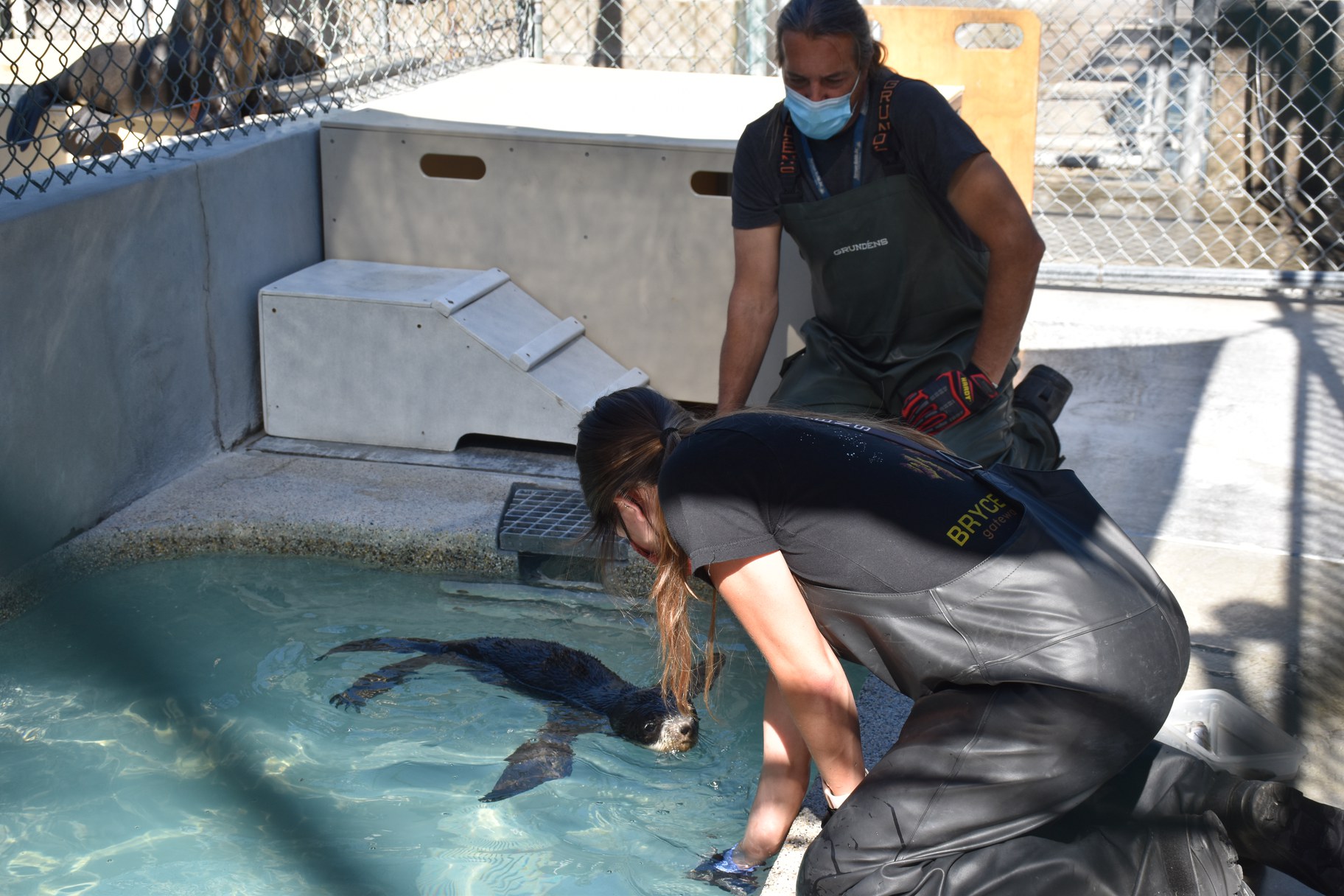 A worker holds bits of fish in the water to teach a northern fur seal how to look for fish once it is back out in the wild. Eventually, the seal will graduate to catching live fish in the water before it is released. Photo by Susan Valot.

“Every year is a little bit different. So sometimes you don’t know what to expect,” Palmer says. “The most significant thing that we’ve seen was an unusual mortality event that occurred between 2013 and 2016, where we had high, high numbers among young sea lions – those are less than a year old or just a year old – coming in for starvation.”

Experts think the multiyear event was caused by a warm water “blob” in part of the Pacific Ocean, which led to the fish the animals eat moving to a different, cooler area. Moms could not get the nutrition they needed, because they had to stay close enough to their pups on land, to keep an eye on them.

Palmer is concerned about what impact global warming could have on sea life.

“These animals are really, really sensitive to water temperature because it has a profound effect on the fish that they eat. So the fish will change where they live, they’ll dive to deeper, colder waters, they’ll migrate, they move,” she says. 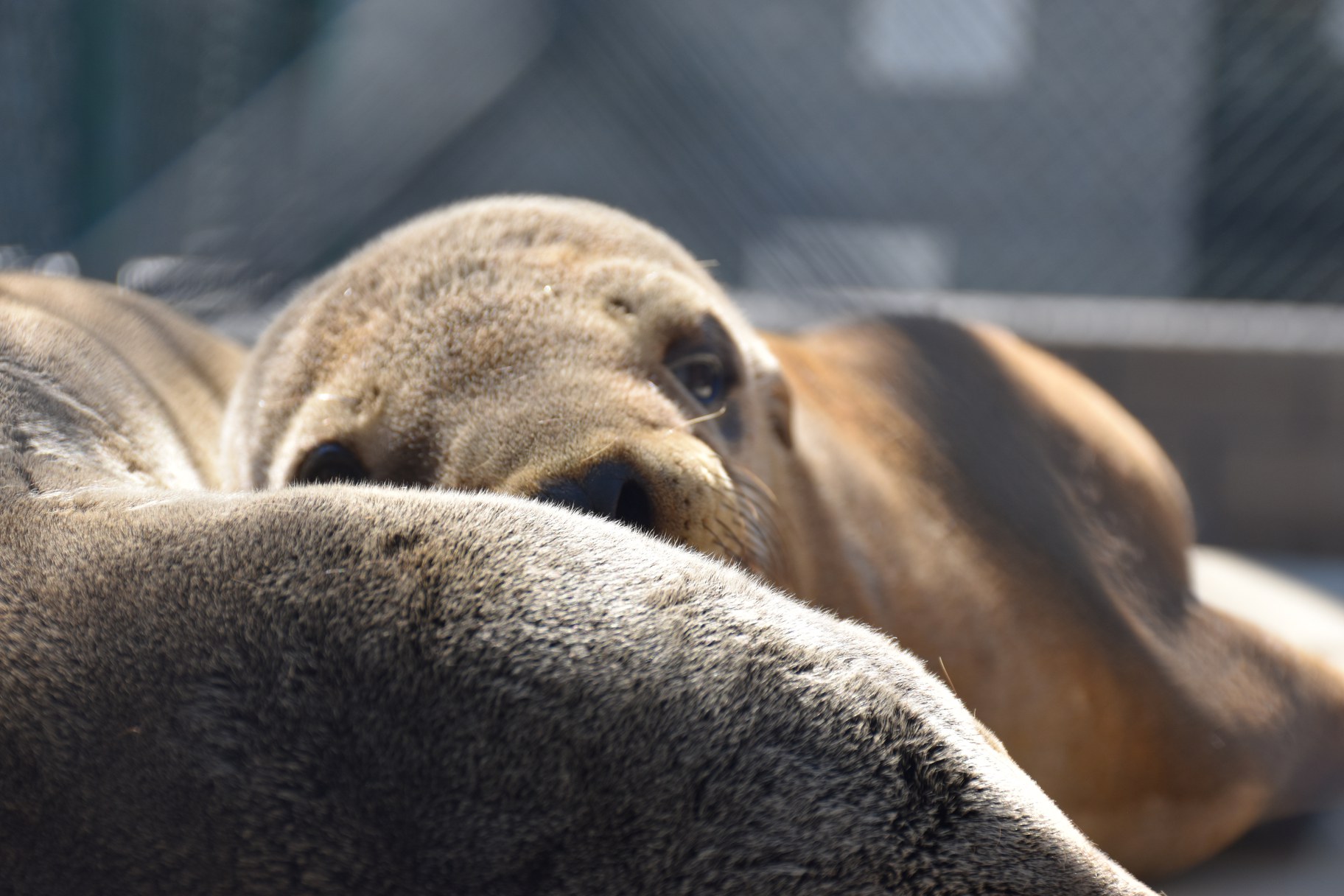 The facility is part of a statewide stranding network that responds when someone reports a sick or injured sea animal on the beach. If you spot a sick or emaciated animal on the beach, you can call the West Coast Region Stranding Hotline at (866) 767-6114. It will send out people to check on the animal.

Usually after six to eight weeks, the animals are released back into the Pacific Ocean, with hopes that they won’t need to return and can cruise the waters on their own.

You can visit the Marine Mammal Care Center Los Angeles, located at 3601 Gaffy Street #8 in San Pedro. It is open for docent-led tours Saturdays and Sundays from 10 a.m. to 4 p.m. Suggested donation is $5. The center asks that you make a reservation so they can control crowds during the pandemic. Masks are also required.

The public can also stop by outside of those hours to view the animals from an exterior fence.

Marine Mammal Care Center LA has survived struggles and the pandemic as it cares for injured sea life. The center has reopened to the public.

Why more bird species are appearing in LA: Results from Christmas Bird Count

The Black Phoebe, the Cassin’s Kingbird, and Pacific Slope Flycatcher are among the unusual birds found in the San Fernando Valley during the latest annual Christmas Bird...

Bassist Frederick “Juice” Johnson suffered strokes, cancer, and then homelessness. His life turned around thanks to nonprofits, and now he’s giving back to those same...