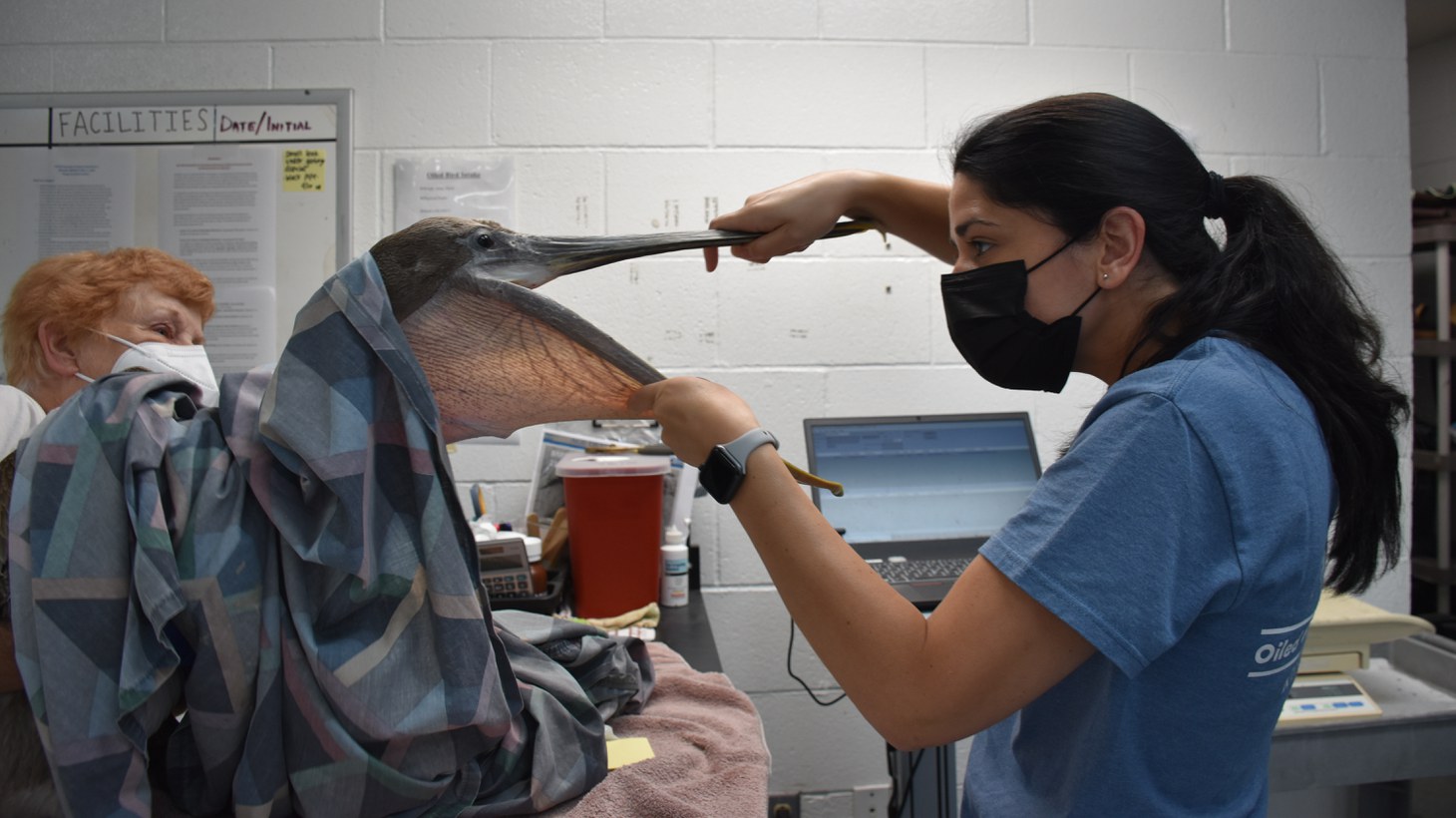 Veterinarian Jamie Sherman of the Oiled Wildlife Care Network examines a brown pelican while volunteer Diane Carter holds the bird, in an exam at the International Bird Rescue in San Pedro. Photo by Susan Valot.

Veterinarians are trying to figure out what’s behind an influx of sick and injured brown pelicans up and down the California coast. Between May 12 and May 30, 220 of the birds have ended up at the International Bird Rescue in San Pedro, a nonprofit dedicated to rehabilitating sick, injured or oiled aquatic birds. That’s on the high end of the number of pelicans the International Bird Rescue’s LA and San Francisco facilities see in a typical year, but this is in a matter of 2 ½ weeks.

International Bird Rescue veterinarian Rebecca Duerr says so far, post-mortem examinations show the animals are starving. They do not have any symptoms of disease, such as bird flu. Duerr says they still aren’t sure what is going on and why it happened so suddenly.

The hardest hit areas appear to be Los Angeles, Ventura and Santa Barbara counties, with a few sick birds also showing up in Orange, San Diego and Monterey counties. Several dead brown pelicans have also shown up on beaches. 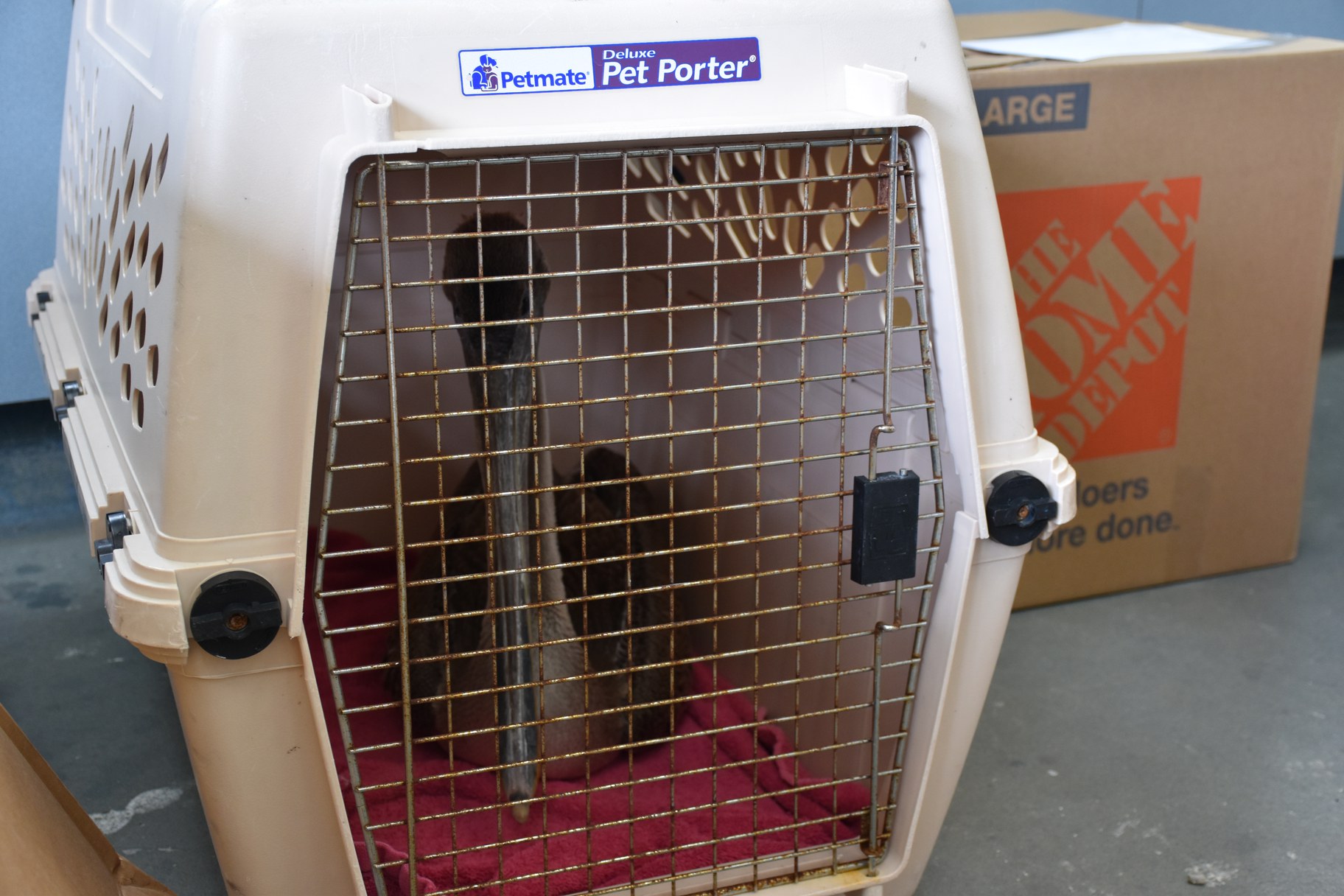 A California brown pelican rests in a dog crate in the intake area of the International Bird Rescue facility in San Pedro in May 2022. Photo by Susan Valot.

At the International Bird Rescue, large moving boxes fill the intake room, each with a pelican inside, occasionally pushing their heads against the closed box flaps. The smell of fish hangs in the air like the pall of smoke in a 1960s Las Vegas casino.

Duerr points out that everyone is wearing a mask here because they cannot afford to have anyone go out sick right now. A few workers have come from other rehab facilities to help out.

Duerr says it is hard to tell if a pelican is starving just by looking at it.

“Even though they’re really a large bird size-wise, they don’t weigh all that much,” she says. “They really only weigh about the same amount as a heavy cat because a lot of the inside of their body is air. They’re very buoyant birds and their skin is structured kind of like bubble wrap.”

She says pelicans use that air-filled buoyancy like a floatie toy on the water, letting them dive for fish and quickly surface. When the birds are emaciated, they become even more bloated with air, so you cannot tell until you pick them up and feel how light they are.

“They’re allowing people to approach, not flying away,” says Duerr. “They might just be hunkered down on the beach, looking pathetic, allowing dogs to come up to them, that sort of thing. A normal bird will stand up and look at you and then fly off.”

The International Bird Rescue is taking in birds from rehab centers in Santa Barbara and other coastal areas that have been inundated to the point that they no longer have room.

Most of the pelicans coming in are at least 1 year old, and about 40% are mature enough to breed. That means these are not babies who don’t know how to fish. These are birds that have survived in the wild on their own for a while.

“What that suggests to us is that there seems to be a problem with them finding food, but nobody really knows why yet, at this point,” says Duerr. 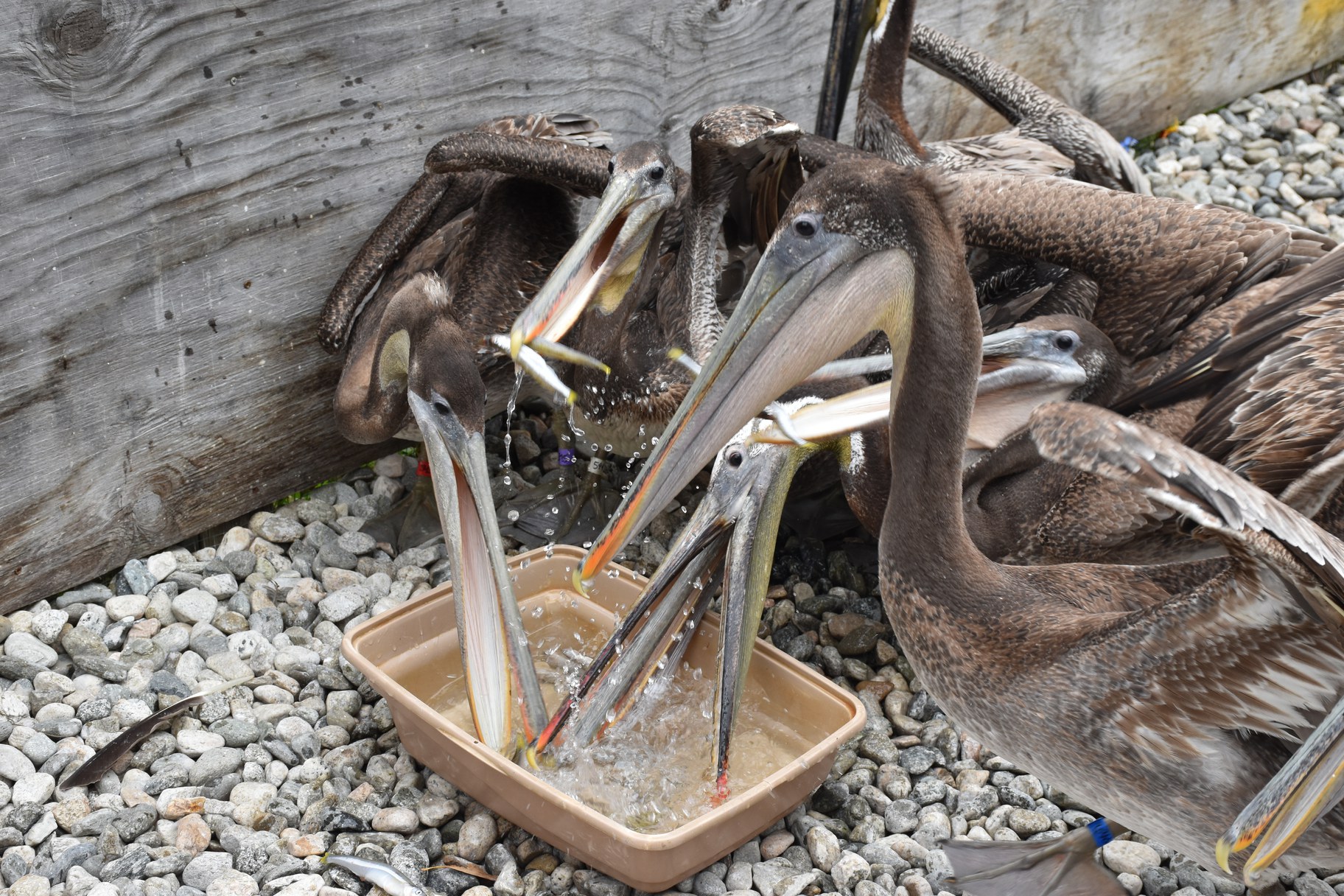 Brown pelicans chow down on fish in an aviary at the International Bird Rescue in San Pedro. The birds who have made it to this area are feeling better and almost ready to be released back into the wild. Photo by Susan Valot.

Many brown pelicans are also coming in entangled in fishing hooks and fishing lines, apparently from trying to hunt for food where fishermen are using hooks and bait to lure fish. One bird had a dozen hooks all over the outside of its body, Duerr reports.

“The pelicans are having trouble finding food right now, and they don’t have any choices for other things to eat, so please do not cast your line where they are eating,” Duerr says.

This is not the first time the brown pelican has been in trouble in California. It was on the federal endangered species list for decades, plagued by problems caused by the pesticide DDT buried off the coast. The California brown pelican was taken off the endangered species list in 2009, and then the next year was hit by a similar wave of sick birds, with another crush of sick pelicans again in 2012. Each of those incidents lasted a few months.

When sick or injured pelicans are brought in, rescue workers triage, weigh and tag them. Then the ones that are well enough to regulate their temperature are put as groups into two large camping tents in a room. This gives the birds a quiet space to rest, and volunteers and workers can check them out more closely.

The pelicans in worse shape are sent to an intensive care area that is kept warmer and where they are monitored with extra attention.

“If the birds are not self-feeding, we’ll actually make a little fish milkshake for them,” says Kylie Clatterbuck, the manager of the International Bird Rescue San Pedro. She says each bird can go through up to five pounds of fish each day.

The birds make their way through a series of rooms over a course of days, based on how they’re doing. When they get better, they are shifted to outdoor aviaries where the birds can fly, swim and preen themselves, much as they would do in the wild. 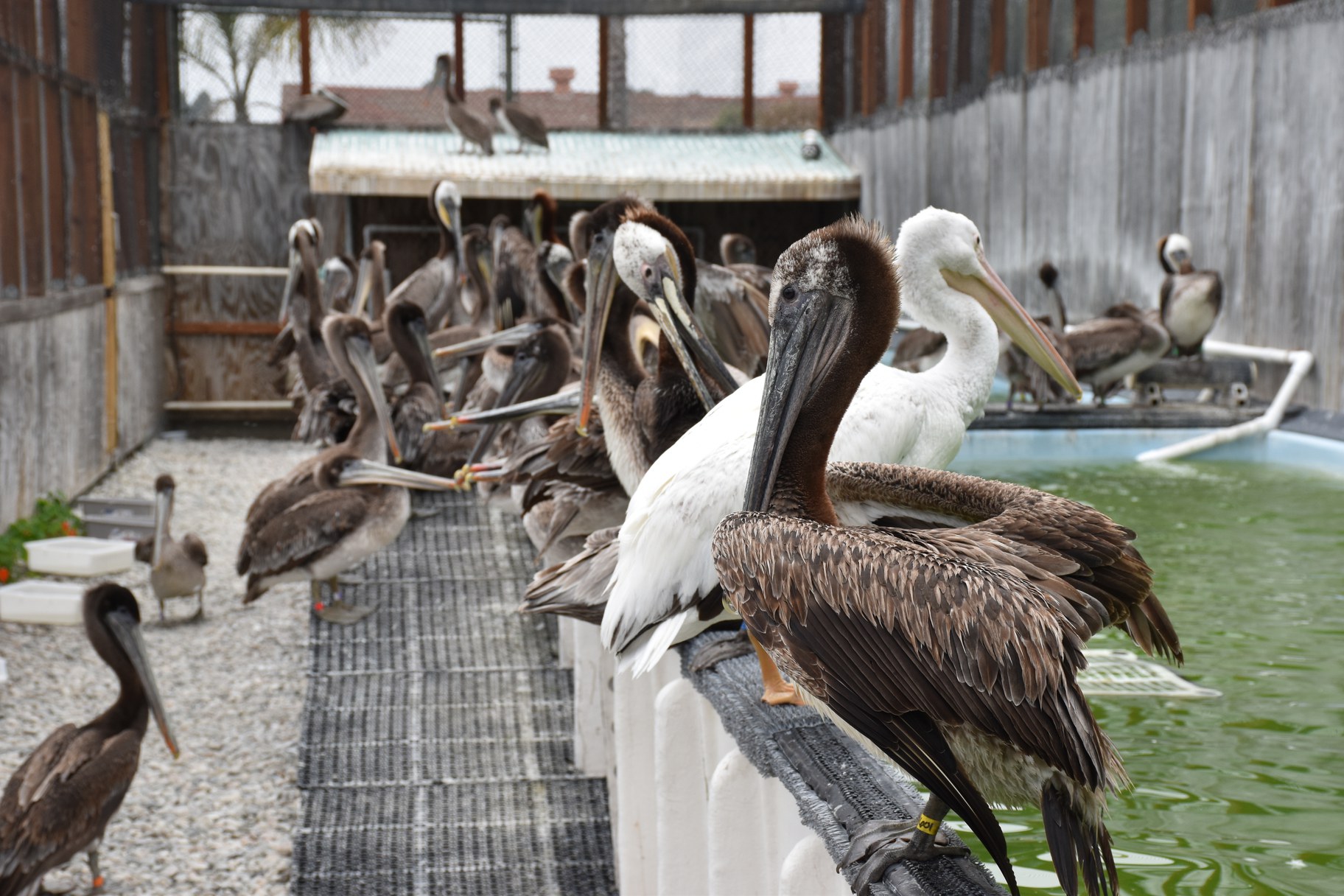 Pelicans rest and preen themselves along a pool in an aviary at the International Bird Rescue facility in San Pedro. Photo by Susan Valot.

The rehab facility does not want to release any of the recovered pelicans until they have a better understanding of what is going on. So they are here at least for another couple of weeks.

Clatterbuck says brown pelicans are one her favorite birds to rehab.

“They’re so resilient. They come back from some horrible injuries. They come back from severe emaciation really, really well,” says Clatterbuck. “Not all species do well in rehab. Pelicans are ones that do exceptional. So no matter how many birds we have in care, I know that we’re going to have a really good success rate with them.”

Water restrictions are set to take effect on June 1 for many Southern Californians. They apply to lawns, swimming pools, car washing, and more. KCRW breaks down the rules.

Shorten showers to five minutes, don’t let the faucet run while brushing your teeth, rethink what you eat and what your yard looks like. These are some tips to conserve water.