Up until then, observance was a largely private tradition with Indigenous roots in Mexico. Ofrendas, or altars, were constructed inside the home. Public participation in the holiday largely stems from the art and activism ignited by the 1970 Chicano Moratorium and movement for civil rights, according to Boyle Heights historian Shmuel Gonzales, who offers walking tours of Evergreen Cemetery. 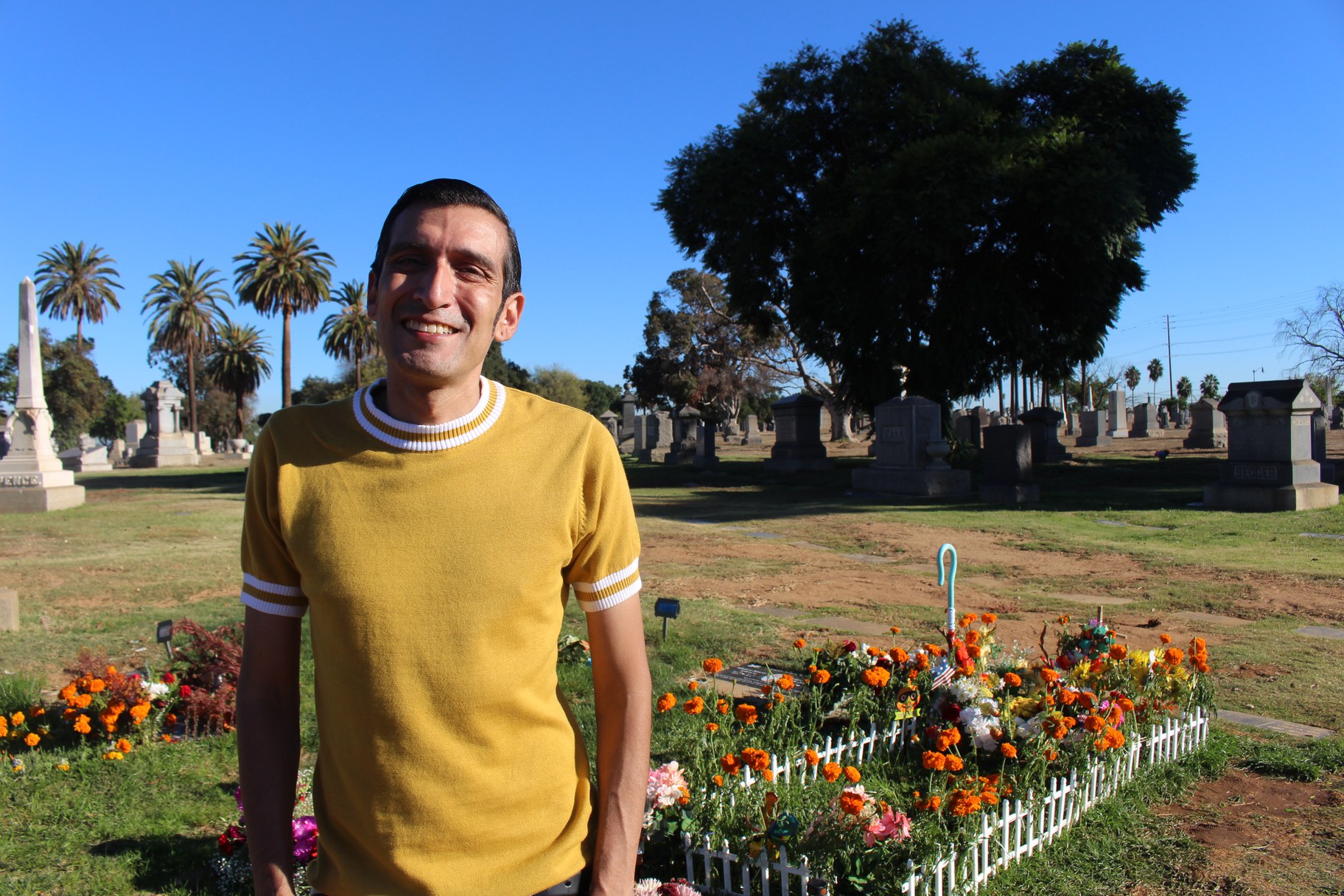 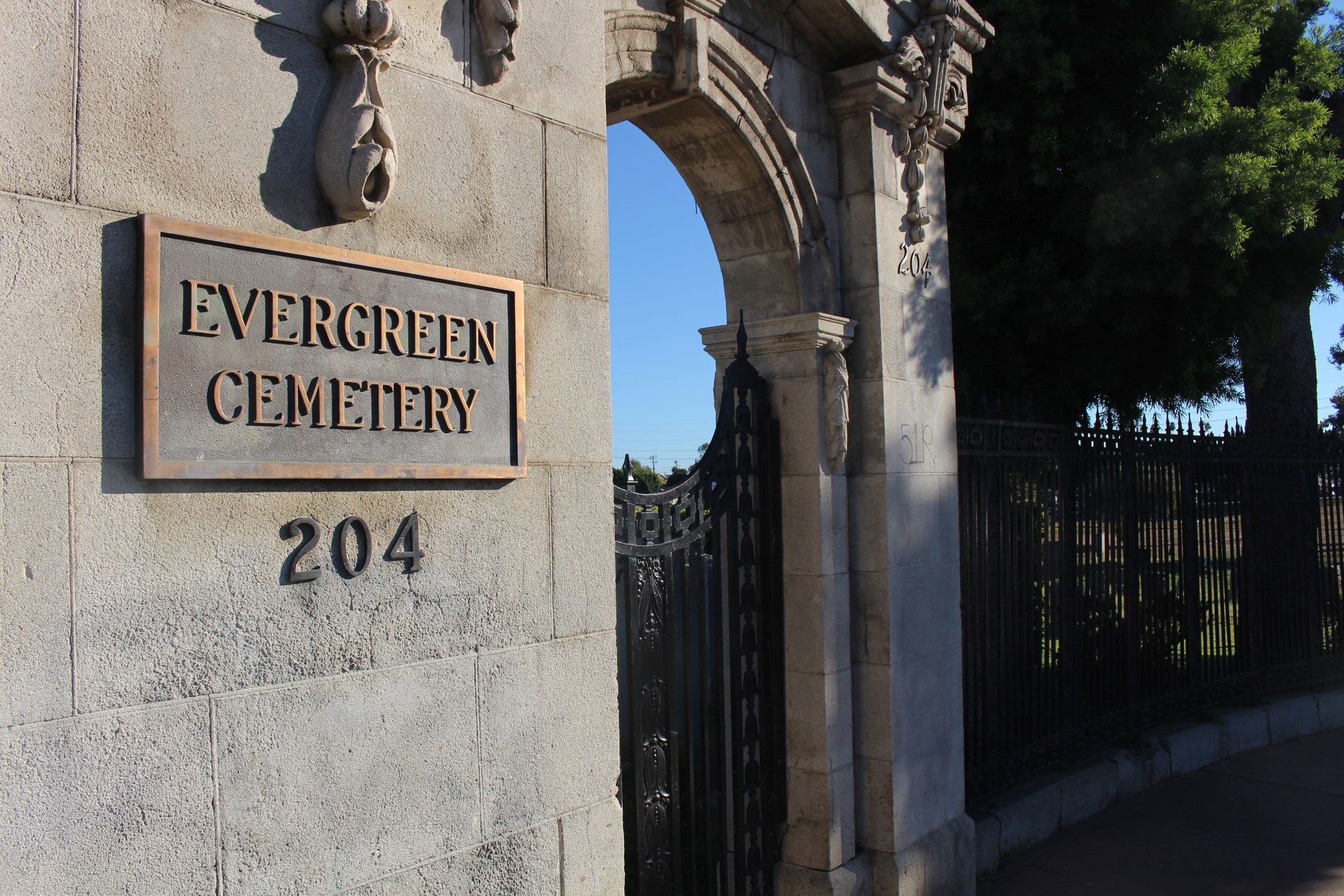 Established in 1877, Evergreen Cemetery is the oldest nondenominational cemetery in Los Angeles, although the site was segregated by ethnicity. Photo by Kathryn Barnes/KCRW.

“She was a radical, chain-smoking, cursing nun who loved to make art,” says Gonzales. “She had noticed that when, not just Chicanos, but Jewish allies were shot down in the streets, many people thought that for safety, they needed to shut down the Chicano movement. She insisted, no, it needed to get momentum. So she wanted to find a day to raise the spirits.”

According to the National Museum of Mexican Art, Boccalero was the first person to organize a Day of the Dead exhibit in the U.S. She was familiar with the holiday through her time at Immaculate Heart College, according to a KCET documentary, where she saw the 1957 film “Day of the Dead” by Charles and Ray Eames.

“She presented it to the first generation of Chicano activists, and had to convince them that it wasn't morbid, that it was the way that we are going to be able to come to terms with death and celebrate people's lives and immortalize them,” says Gonzales.

The first Día de los Muertos was a small gathering in the parking lot behind Self-Help Graphics in 1972. In 1973, a procession of people and floats went down the street from Evergreen Cemetery to the organization’s headquarters. A Catholic mass and indigenous ceremonies were celebrated at the cemetery, along with participation from the Asco art collective. 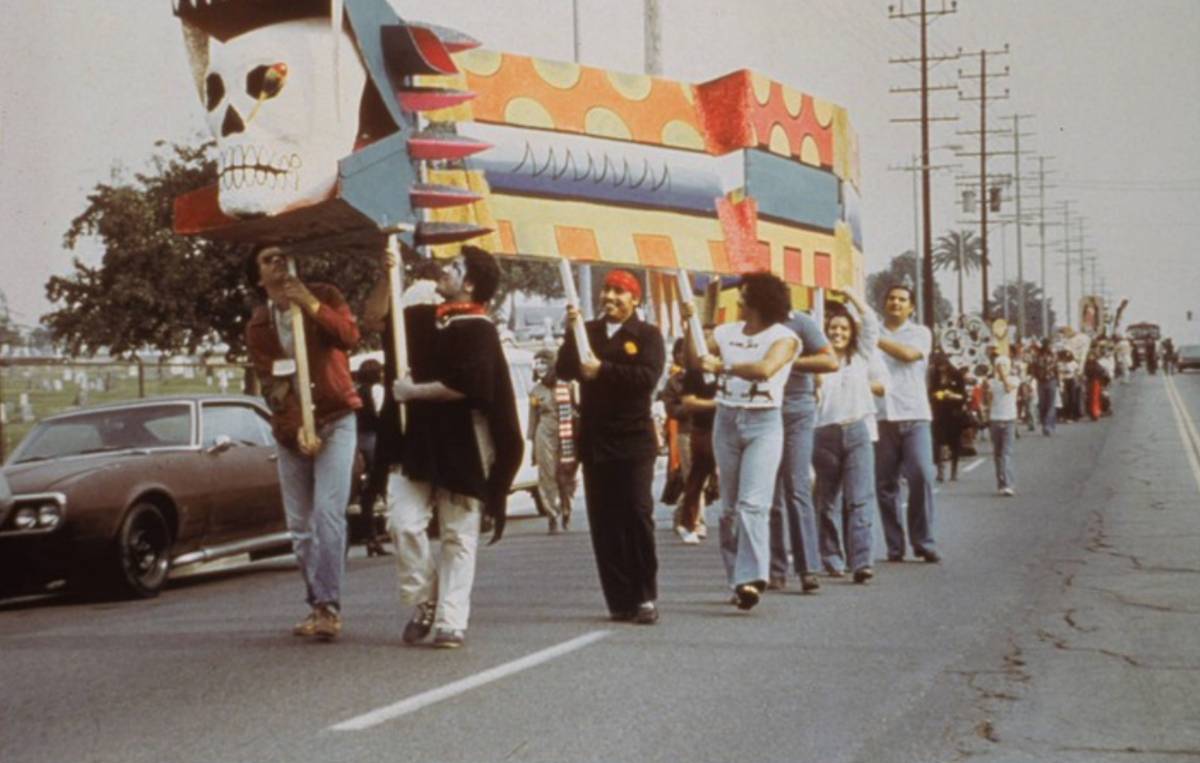 In the 1970s, a procession of floats traveled from Evergreen Cemetery to Self-Help Graphics in Boyle Heights on Día de los Muertos. Courtesy of Shmuel Gonzales.

Observance of the tradition spread, and after decades of activism, art and even commercialization, it's celebrated widely. Though much smaller, Self-Help Graphics continues to hold an annual celebration, including an art workshop and bike caravan on November 6. 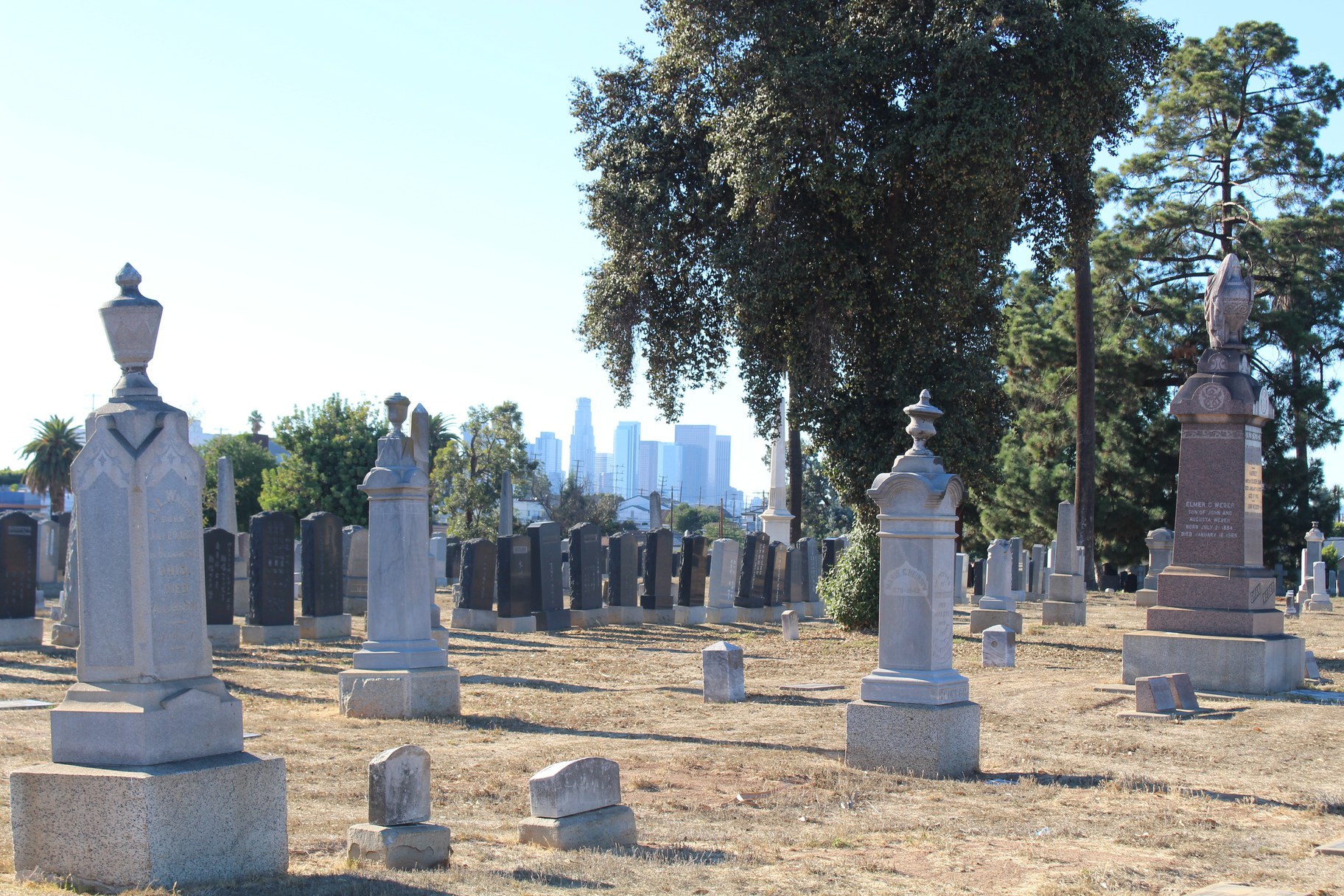 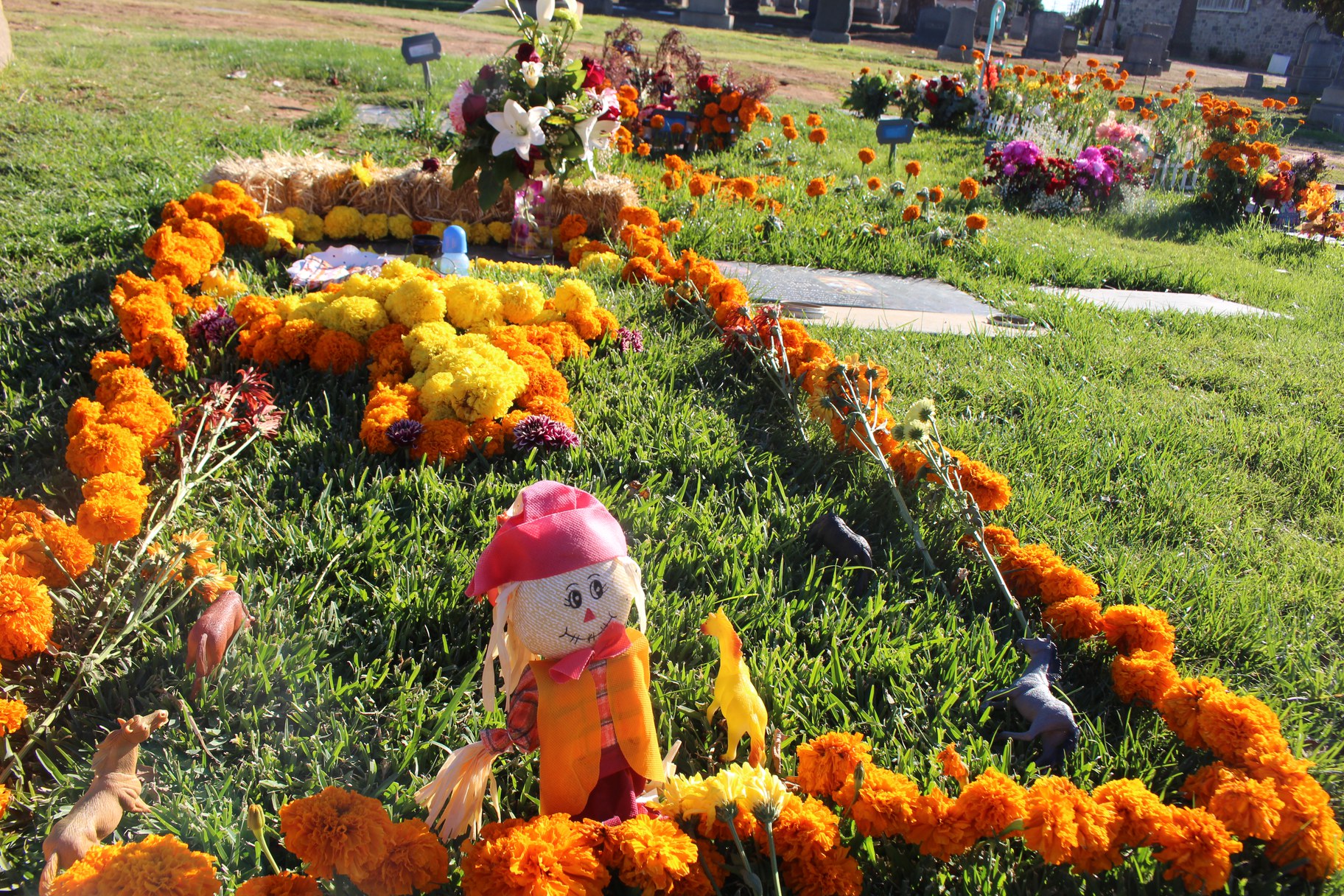 Gonzales would like to see the public event return to Evergreen Cemetery so that its roots in LA Chicano history aren’t forgotten.

“We need to bring Día de los Muertos back as a celebration here, not just people coming to decorate individually, but to bring the attention back that this is the place that it was rebirthed as a diaspora Mexican American tradition for a deeply social and American purpose.”