The adult California condor is uniform black — with the exception, especially in the male, of large triangular patches or bands of white on the underside of the wings. Photo courtesy of Santa Barbara Zoo.

The California Condor reached a historic milestone you may have missed with everything going on in the news. In May, for the first time in half a century, four condors touched down in Sequoia National Park.

With a wingspan of nearly 10 feet, the condor is the largest land bird in North America. For comparison, a turkey vulture has about a six-foot wingspan. 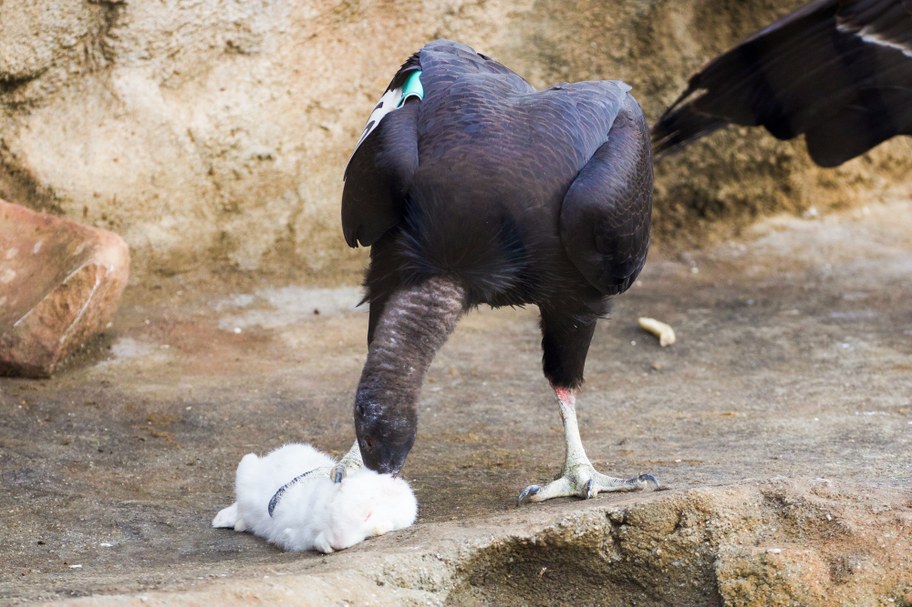 A California condor feeding on a rabbit. Photo courtesy of the Santa Barbara Zoo.

The California condor has had a long and tumultuous history. They once dominated the entire North American continent, stretching from Western Canada to Florida, feasting on the remains of woolly mammoths and giant ground sloths.

As European settlers began to arrive, the condors took refuge in the still wild California. But soon that became less wild too. More and more people descended into their habitat. Hunters and ranchers began using bullets containing lead. Those lead fragments proved lethal as condors ate the bodies of dead animals.

Biologists say lead poisoning is still responsible for half of all identifiable condor deaths.

By 1982, the wild population was down to 22 condors. To avoid extinction, all the remaining birds were trapped.

“The decision was very controversial at the time, but the decision was to catch all of those birds and bring them into human care,” says Rachel Ritchason, the Director of Animal Collections at the Santa Barbara Zoo. “It’s one of the most dramatic undertakings to save a species where every known animal was taken out of their natural habitat. 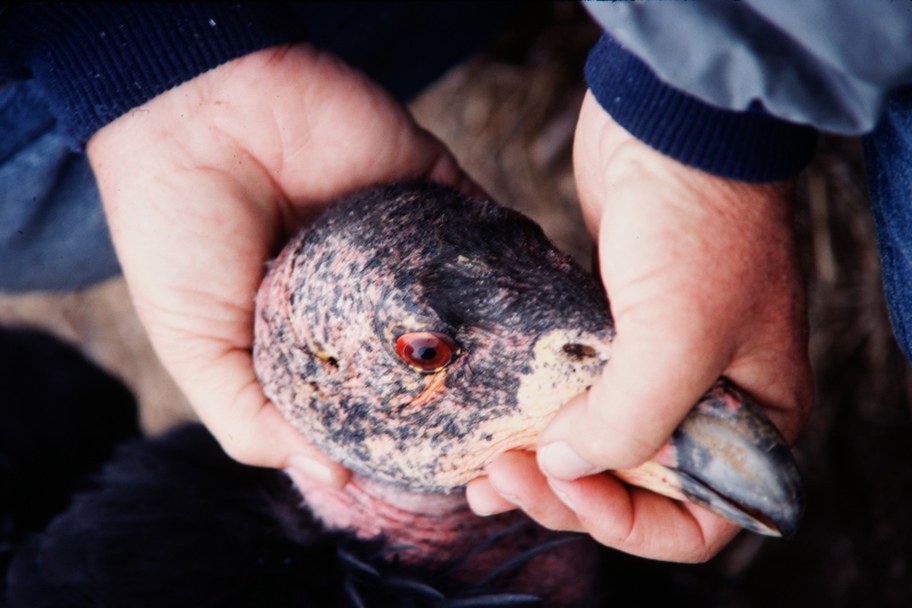 This male California condor, known as AC-4, was captured on August 7, 1985, by biologists at Bitter Creek National Wildlife Refuge as part of an effort to prevent the extinction of the species. Photo courtesy of USFWS.

A captive breeding program began at the LA and San Diego Zoos, later expanding to Oregon and Idaho. Like a matchmaking service, the staff carefully paired sexually mature condors with one another, supported their offspring, and then sent members of the family to other programs in order to make more babies and diversify the population.

In 1992, the U.S. Fish and Wildlife Service teamed up with partner organizations and began releasing some of the condors back into the wild. The Southern California flock, which is now made up of about 100 wild condors, is released in the Los Padres National Forest at the Bitter Creek National Wildlife Refuge, about two hours north of LA.

As the population grows, so does the condor’s geographic range.

They’ve been spotted in Santa Barbara, Los Angeles, Fresno and beyond.

“We've had condors actually fly over the Sierra Crest and spend time near Mount Whitney,” says Steve Kirkland, the California Condor field coordinator for the U.S. Fish and Wildlife Service. “We've had birds up near Shaver Lake and Bass Lake, so pushing toward the southern boundary of Yosemite National Park.” 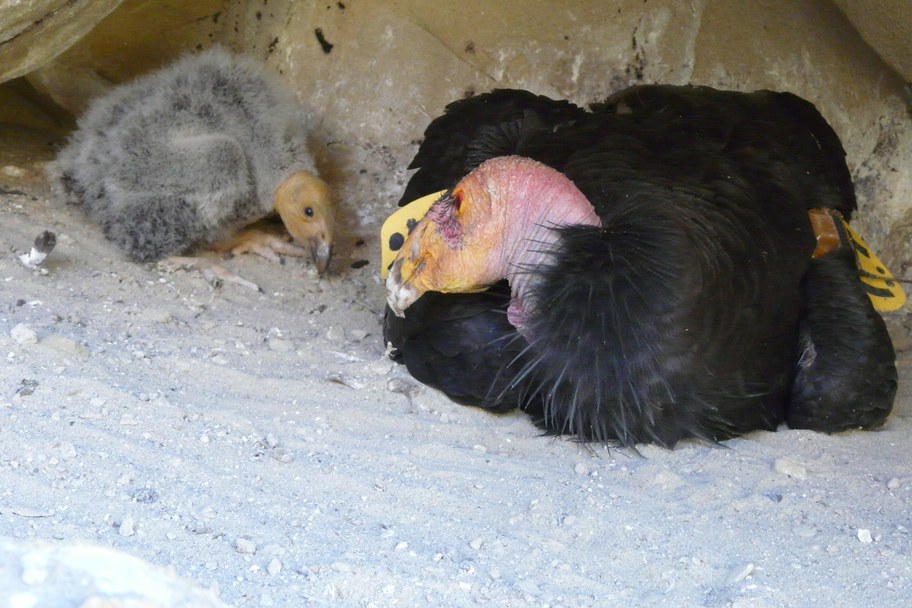 A California condor sits next to its 30-day-old chick in a nest cave near Hopper Mountain National Wildlife Refuge in 2008. Photo by Joseph Brandt/USFWS. 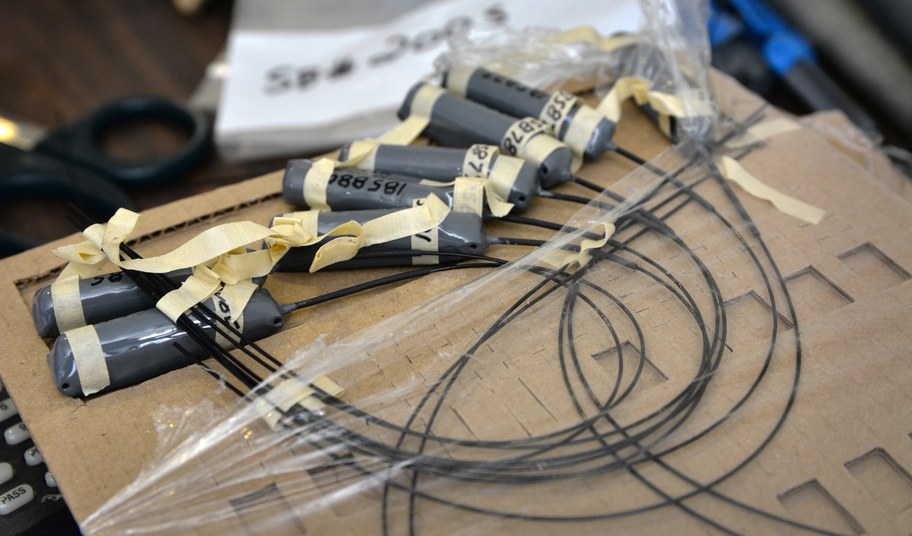 Biologists attach one or two transmitters to the tail feathers of each condor to track their movements. Photo courtesy of USFWS.

More than a half century ago, condors built their nests in the carved out sections of giant Sequoia trees. Kirkland hopes to see those nests return now that the birds are touching down in the national park.

“Giant sequoias are amazing trees and having condors nesting in them … that would be a really exciting thing to see again,” he says.

Separate flocks continue to prosper in Central California near Big Sur, Arizona near the Grand Canyon, and the Baja Peninsula in Mexico.

“I fully believe these birds will recover,” says Ritchason from the Santa Barbara Zoo. “I think we're well on our way to the recovery status where eventually they'll be downgraded from critically endangered to endangered or threatened.” 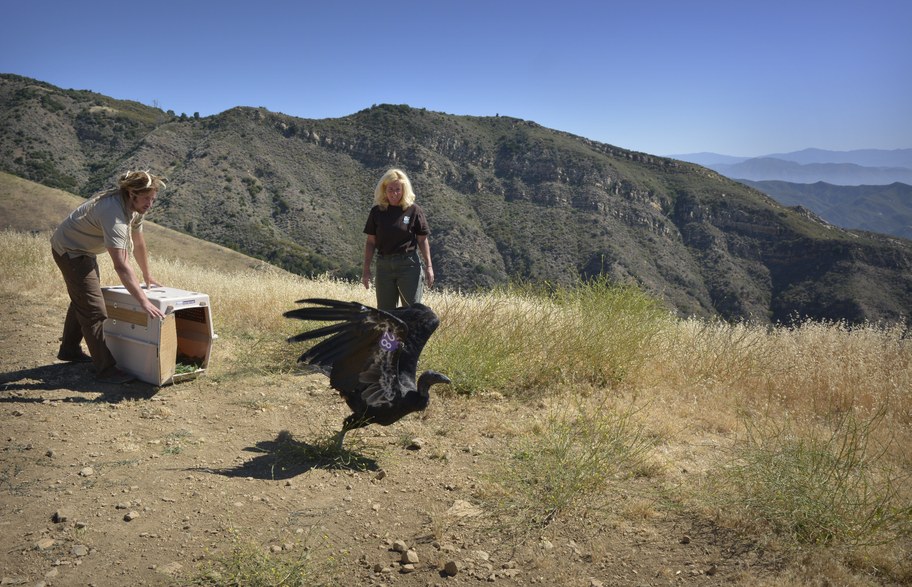 Service biologist Joseph Brandt and Beth Pratt, of the National Wildlife Federation, release condor #628. The condor had completed treatment for lead contamination and was released back into her home range. Photo by Jon Myatt/USFWS.

There’s still a long way to go. Biologists continue to educate the hunting and ranching community about the dangers of using lead bullets.

But it’s not as simple as “man versus condor.” Kirkland says hunting and ranching is crucial to the bird’s survival. Leftover game is a primary food source, and ranchers who maintain open land provide condors with a vital habitat.

“Hunting … and the ranching community ... plays a really important part in the ecosystem, both by providing food for scavenging species like condors, but also in terms of contributing to open space,” he says. “Hunting is really the key to the recovery of this species. It's simply just switching to non-lead ammunition.”

In May, for the first time in half a century, four California condors touched down in Sequoia National Park.

Why some Angelenos are volunteering to be COVID-19 contact tracers

The government has tapped some city employees to do coronavirus contact tracing. But other Angelenos are volunteering to do it. KCRW talks to two of these volunteers — an...

The coronavirus pandemic has led people to work from home or avoid taking buses and trains if they can help it.