For parents who have exhausted all the streaming content their kids could devour this quarantine year, there’s a new show that may wet the appetite of kids and adults alike. “Waffles + Mochi” (Netflix) is by Barack and Michelle Obama’s Higher Ground Productions.

“The thing that they don't explain to you before you have kids is how much time you spend watching shows with them. And some of the shows are just kind of unbearable,” says Dan Wilcox, the show’s music supervisor and a DJ at KCRW.

That’s what got him excited about the project — it sounded like a show he himself would watch. 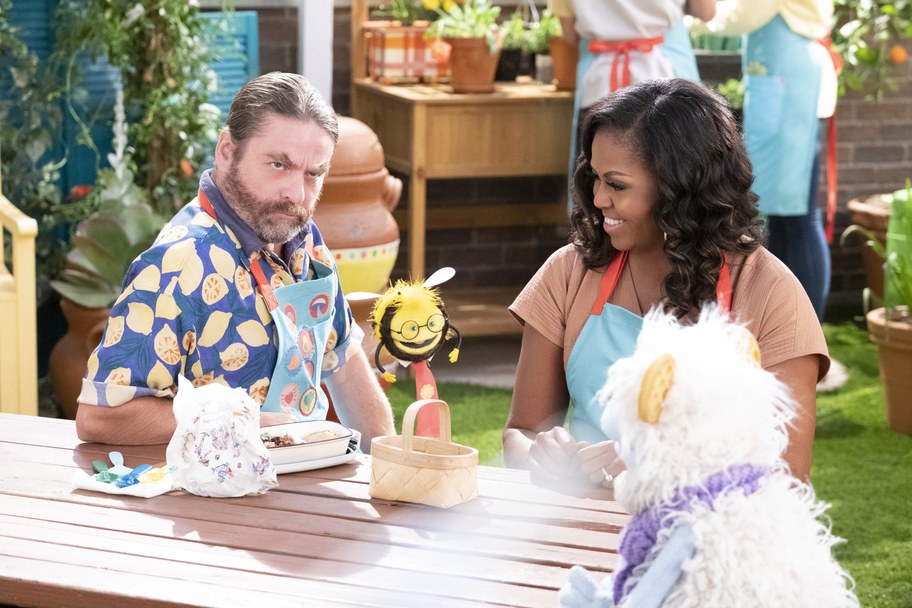 With the help of a supermarket owner (Mrs. Obama), the main characters, Waffles and Mochi, travel to kitchens, restaurants, farms and homes all over the world, cooking recipes with everyday ingredients alongside renowned chefs, home cooks, kids and celebrities.

The show has a 1970s “Sesame Street” feel, and Wilcox leaned into that when finding music for it. The series features original songs written by Chris Bear of Grizzly Bear and LA comedy-folk duo Riki Lindhome and Kate Micucci. The songs are performed by celebrities like Maya Rudolph, Jack Black, Sia, Reggie Watts, and Lionel Richie.

“We came up with this idea of using vintage music from all of these various places to give the music a bit of a distinctive flavor,” says Wilcox.

In each episode, Waffles and Mochi learn about one particular food item, and how it’s prepared by different cultures. For the potato episode, the characters travel to the Andes Mountains of Peru to learn about all the different types of potatoes grown there.

“We wanted to find an unusual, interesting song for that moment. And we found incredibly rare 70s psychedelic cumbia that is really bonkers and fits the scene perfectly,” says Wilcox, referring to “Lobos Al Escape” by Los Orientales de Paramonga.

In the herbs and spices episode, they travel to the Drogheria Mascari spice market in Venice, Italy.

“We wanted to have an introductory song for them traveling to Italy, so we found this very over-the-top, lush, [19]60s Italian pop song from Cocki Mazzetti.”

Wilcox says working on Netflix’s “Street Food” expanded his vintage world music horizons. “Wherever it was that they were going, I wanted to find the most interesting and distinctive approach that fit the show.”

Brick and mortar stores have suffered along Van Nuys Boulevard, with “For Lease” signs visible on just about every block.

Netflix's "Waffles + Mochi" has a 1970s “Sesame Street” feel, and Dan Wilcox leaned into that when finding music for it.