California will open COVID-19 vaccination centers up to everyone in about two weeks. These days, the folks in line tend to be teachers, grocery store workers, chronically ill people, or people over age 50.

But sometimes you get a person who doesn’t fit into one of the currently eligible categories, like Gabe Fabricant, a 36 year old who is now unemployed.

He got his shot thanks to a Food Handler Card, which vaccination centers have been accepting since the beginning of March as proof of being a food or agriculture worker. As a former restaurant worker, he was familiar with the process. He paid less than $8 to watch an hour-long video course, took a test, and earned a card. He says the process is so easy, he can do it in his sleep.

“Once I was comfortable knowing that supply was kind of getting to the point where it was meeting or exceeding demand, it didn’t feel like I was taking a spot away from someone who needed it,” he says.

Fabricant says he wasn’t trying to keep his plan secret. He actually took to Twitter and offered to help anyone else who wanted to jump the line. It might not be ethical, but he’s not the only one trying this.

It turns out that jumping the line isn’t that difficult. Since the county opened eligibility to people with certain health conditions, one method of proof is a self-attestation form, where people can simply check a box saying they have a condition and sign their name.

He says he has his reasons: He’s not willing to apply for another job in food service until he’s vaccinated. He was also suffering from panic attacks whenever he felt at risk of being exposed.

The vaccinators at the CVS in North Hollywood where he got his shot told him a third of that day’s appointments were no shows. “Any lingering doubts I had along the lines of, ‘Am I cheating the system or skipping the line? Am I taking a dose away from someone who needs it more than me?’ are completely gone,” he texted from the pharmacy.

“I never want anybody who’s eligible to get vaccinated to not come forward and get vaccinated because they’re worried that they don’t have the correct document. That’s why we’re very flexible on the documentation,” she says.

It’s the question of fast versus fair. The stricter the rules, the slower the rollout, and the more people die. Be more lax, the people who have time to test for a Food Handler Card, or money for the internet connection to research the weaknesses in the system and score an appointment, are rewarded. As the vaccination effort drags on, LA County is leaning more into the latter: just get the shots into arms and worry less about whose arms they are.

“I don’t really want to be spending all of our time trying to thwart that,” says Ferrer. “Our goal right now is to make sure that there are absolutely no barriers to getting vaccinated for people who are eligible, who live in hard hit communities, or who are members of racial or ethnic groups that are underrepresented in our vaccination efforts to date.”

When an Encino mom named Stefanie decided she would try to get the vaccine for her family before they were eligible, several friends suggested she just lie. Stefanie doesn’t want her last name used, since her method of getting vaccinated has been controversial.

She drove to South Central LA last week, and stood outside Kedren Health Center, hoping to get three expiring doses for her, her husband, and her 16-year-old daughter. She’s since faced backlash as a white woman from an affluent neighborhood traveling to a primarily Latino, low-income neighborhood for a shot.

"I feel like we have bigger fish to fry with people actually completely lying about it, than to try to shame people and say you're taking a vaccine away from somebody who lives in that community,” she says.

Now that Kedren is prioritizing nearby zip codes, she says she thinks it’s less likely that she’s taking a shot from someone who deserves it.

“I don't know, I could be making excuses for myself. Look, I really wanted one. So I was willing to go stand in line,” she says. “If you want to try to get a leftover vaccination, you are going to be doing something that pisses somebody else off.”

And for every person who’s bending a rule, there’s someone who’s breaking it.

“Now I have friends who are literally like, ‘Oh, I was a cross country coach last summer. I’ll bring a pay stub from that.’ And they know they’re doing it, they’re like, ‘I just want to get vaccinated,’” says LMU graduate student Ann Kelly. 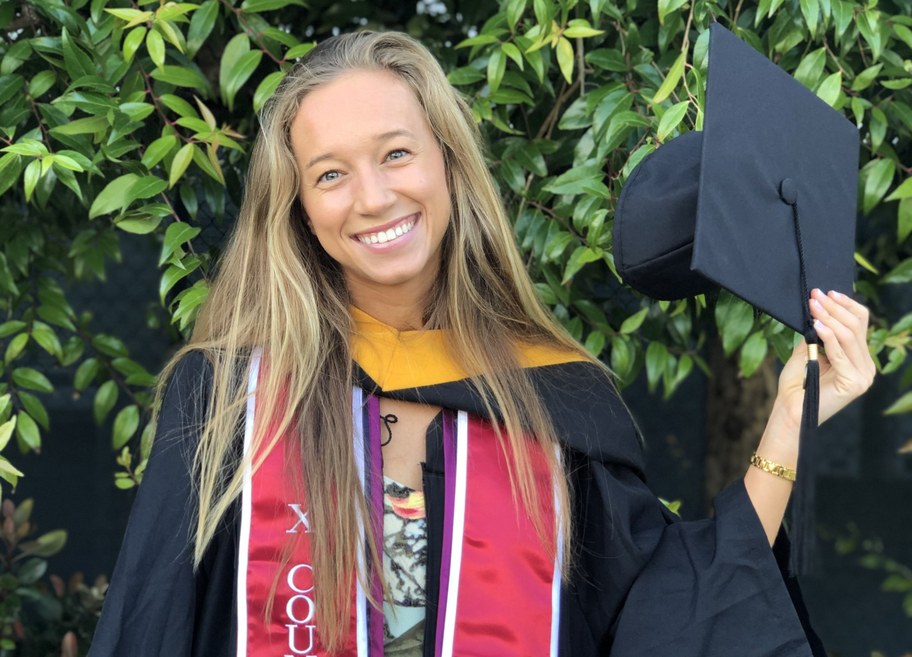 Ann Kelly received her first dose of the Pfizer vaccine before she realized she qualified as an education worker. Photo courtesy of Ann Kelly.

Kelly is a teacher’s assistant (TA). Her job includes grading papers and taking attendance, and is done completely virtually. She heard from her roommate that another TA on campus got the shot.

“I didn’t even know if that was legal, but I was like … if other people are doing it, I'm going to do it. Because I want to get my vaccine,” she says. “It’s kind of selfish looking back at it.”

She made an appointment at the Cal State LA distribution site and brought a pay stub, but nobody checked it. She got her second dose this week.

“The whole time I was going through the line, I was like, ‘I wonder if they’ll kick me out because I'm just a TA.’”

Kelly says she doesn’t fault her friends for jumping the line, but rather the system they’re living in: “I understand that it’s wrong, but at the same time, this is how America works. If you can, you will. If you can afford it, you’ll get it. Or if you have connections, you’ll get it.”

Everyone has their reasons. For Kelly, it’s her living arrangement and staying healthy for the final months of her NCAA career. For Fabricant, it’s flying home for the first time in more than a year. And for Stefanie, it’s being safe before her daughter goes back to high school. All three of them don’t regret what they did to get their first dose.