Grace Community Church is located in Sun Valley, California. Since July, there have been indoor, in-person services on weekdays and Sundays, despite public health officials ordering residents to wear masks and practice social distancing. Photo by Brandon R. Reynolds.

It’s a Sunday morning in September, and members of Grace Community Church are happy to be here. Before the service starts, they’re standing under the morning sky, where the sun would be if not for the wildfire smoke. They’re shaking hands and hugging one another in their Sunday best. Their mouths are curling up at the corners. Remember smiling at people?

It’s a familiar scene from another year, another lifetime.

Since July, Grace Church has been holding indoor, in-person services on Sundays and throughout the week in defiance of the county’s health order requiring masks and social distancing. Hundreds gather under the big white tent the church put up in the parking lot, but as many as a few thousand more gather in the worship center and overflow rooms. 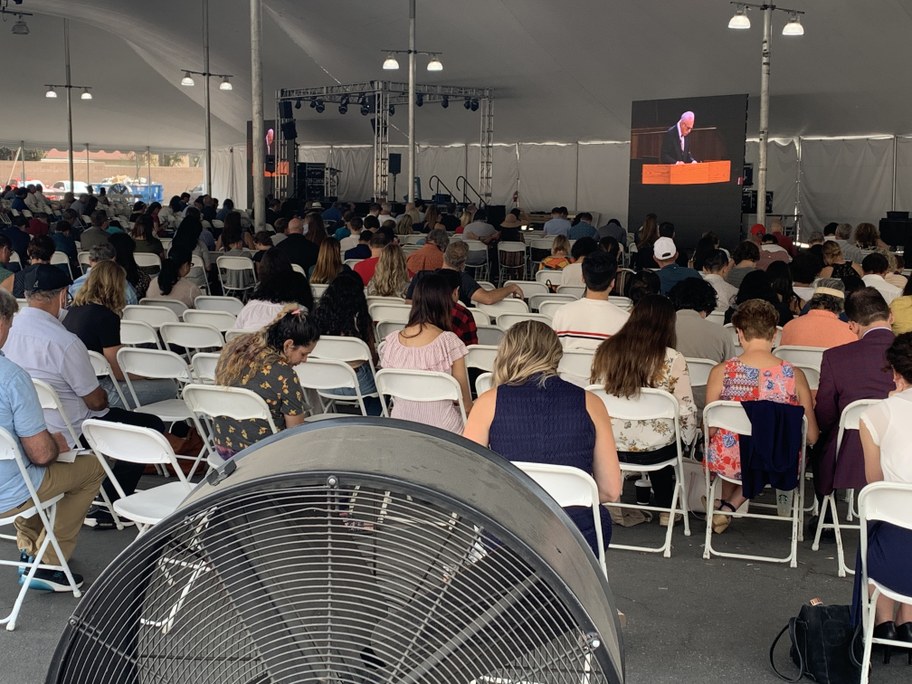 Grace Community Church put up a large white tent in its parking lot, where hundreds gather on a recent Sunday. Photo by Brandon R. Reynolds.

“The notion of a secular state is a lie,” he says. “Government is ordained by God.”

Even a few months ago, the church wasn’t this combative.

During the first outbreak of the virus, the church more or less officially closed its doors, though a former parishioner said that unofficially, Grace Church still held events during the week and on the weekends. That may explain how it had a few brushes with COVID-19.

In March, they held an annual conference, bringing together church leaders — all men — from around the world. Afterward, the church issued a statement that one of the visiting pastors, a man from Washington state, died of COVID-19.

In an April podcast, MacArthur talked about “one couple in our church in the Spanish ministry who actually got the coronavirus.” But by the end of the summer, that story had changed. In an Aug. 30 sermon, MacArthur said, “We’ve all been suspicious of the fact that we’ve been meeting for weeks and weeks and weeks. We don’t know anyone who’s ill. Nobody in our congregation’s ever been to the hospital with this.”

Why the change of heart?

In July, Gov. Gavin Newsom responded to rising coronavirus infection rates by restricting indoor public gatherings. After that, the church published a statement titled “Christ, Not Caesar, Is Head of the Church.” The Caesar statement says that church elders had always considered the state orders an unacceptable intrusion. But early on, no one knew the severity of the virus, so the elders opted to close up shop because “guarding public health against serious contagions is a rightful function of Christians as well as civil government.” As time went on, the church decided that the virus numbers weren’t significant enough to keep the doors closed.

When the church began holding indoor, in-person services again, LA County responded with a cease-and-desist order. The church responded with a lawsuit. Since July, it’s been back and forth as the county has pushed for an injunction. The case is currently postponed to at least November, owing to court rules about meeting during the pandemic. In that sense, the pandemic is keeping the county from taking any action to, as it sees it, keep the church from exacerbating the pandemic.

Otherwise, the county’s hands appear to be tied. It can issue fines, but only if the court approves it. And LAPD said it’s not going over there to arrest anyone. In a memo, the department says “Los Angeles Police Department personnel SHALL NOT take enforcement actions on such matters.”

However, one move officials were able to take: As of Oct. 1, the county terminated the church’s lease on a parking lot it rents from the county. 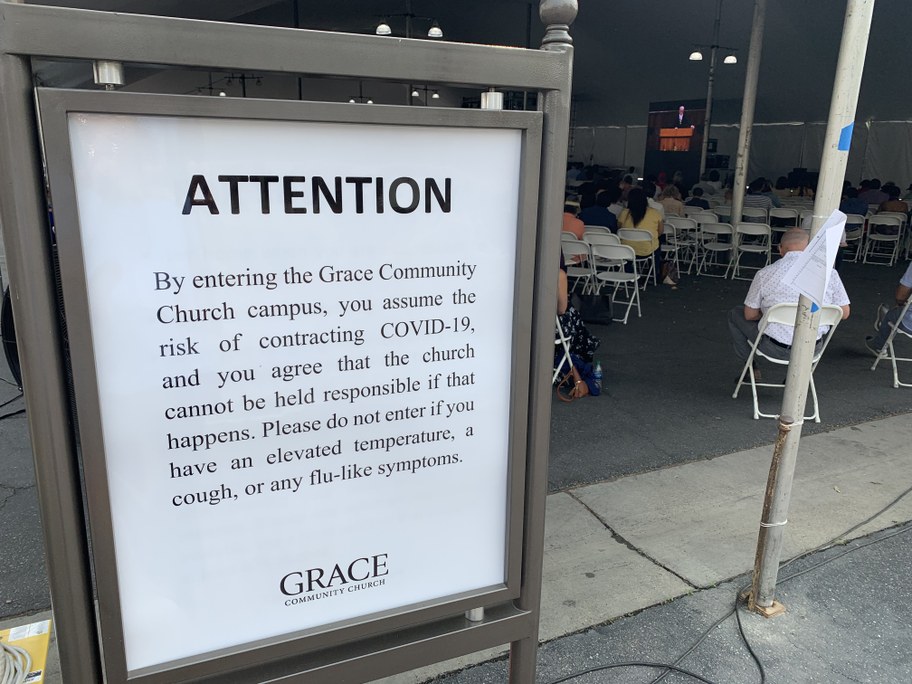 A sign warns churchgoers that they assume the risk of contracting COVID-19 and that the church is not responsible if they get sick. Photo by Brandon R. Reynolds.

Meanwhile, the church’s legal team, led by Jenna Ellis, an attorney who’s also a senior advisor to the Trump campaign, has argued that the county’s actions are unconstitutional.

As he makes the rounds of Christian media and Fox News, Pastor MacArthur and Grace Church have become the poster children for First Amendment rights.

But are their rights being infringed?

“The church's argument is not ridiculous, but it's unlikely to prevail,” says Eugene Volokh, a professor of First Amendment law at UCLA. “Normally, of course, the freedom of assembly gives everybody, religious or not, the right to gather for political reasons, religious reasons, to listen to speakers about art or literature or whatever else. But these are not normal times. And in such times, generally speaking, courts have allowed the government to restrict religious services alongside other similar gatherings.”

The thought of the state restricting speech and movement is — and should be — troubling. There’s some sense of how the case might go down, though. In May, a South Bay Pentecostal church’s suit against Gov. Newsom reached the Supreme Court. The case was decided, narrowly, against the church. Chief Justice Roberts wrote, “Although California’s guidelines place restrictions on places of worship, those restrictions appear consistent with the Free Exercise Clause of the First Amendment.”

Other arguments will rise up through the courts. In fact, there’s a church in Ventura now waging a similar fight as Grace.

Grace Community Church is a family and an empire. Under the Grace umbrella is a university, an international seminary, and a large radio station. Pastor MacArthur has been at the helm of all this for 51 years. He’s published books on scripture — supposedly 400. His sermons are translated into seven languages. The church has a lot of influence, and the outcome of this case will resonate for businesses, religious institutions, and the law itself.

Since July, Grace Community Church has been locked in a legal fight with LA County over whether or not they have a constitutional right to meet, in person and without masks...

Since the pandemic began, writer and comedian Jenny Yang has taken her act to a show called “Comedy Crossing.”