Kuei Ching Chen immigrated to California from Taiwan in the 1970s. As her children grew up and started their own families, she eagerly became a grandmother. “The grandchildren all were so bonded with Amah. They think she’s the smartest one in the family,” says her son-in-law David Davis. Illustration by Mike Royer.

With her husband and three kids in tow, Kuei Ching Chen took the brave step of immigrating to California from Taiwan in the 1970s.

In the days following her arrival, she had a difficult time acclimating. “It takes a lot of strength and bravery to venture to another country where you just don't speak the language and aren’t accustomed to the food — to pursue opportunity and a better life for your children,” her daughter Nancy Chen says.

Nancy says her mother longed for the familiarity of living in Taiwan and being able to see her sisters. Meanwhile, Nancy’s father loved the United States the minute he arrived.

Kuei soon began growing her support system across the state. “They were able to create a network of friends and people where they could trade recipes, exchange ideas and contacts, and really develop those connections in the Asian community in California [and] in LA.”

As Kuei’s children grew up and started families of their own, she eagerly fell into the role of grandmother. “My parents were very involved in their grandkids’ lives. … My parents have cared for every single one of them. Every single one of their grandkids, they helped raise,” Nancy says. “She would pick them up and would care for them, feed them, [and] make sure their homework was done until we picked them up in the evening.” 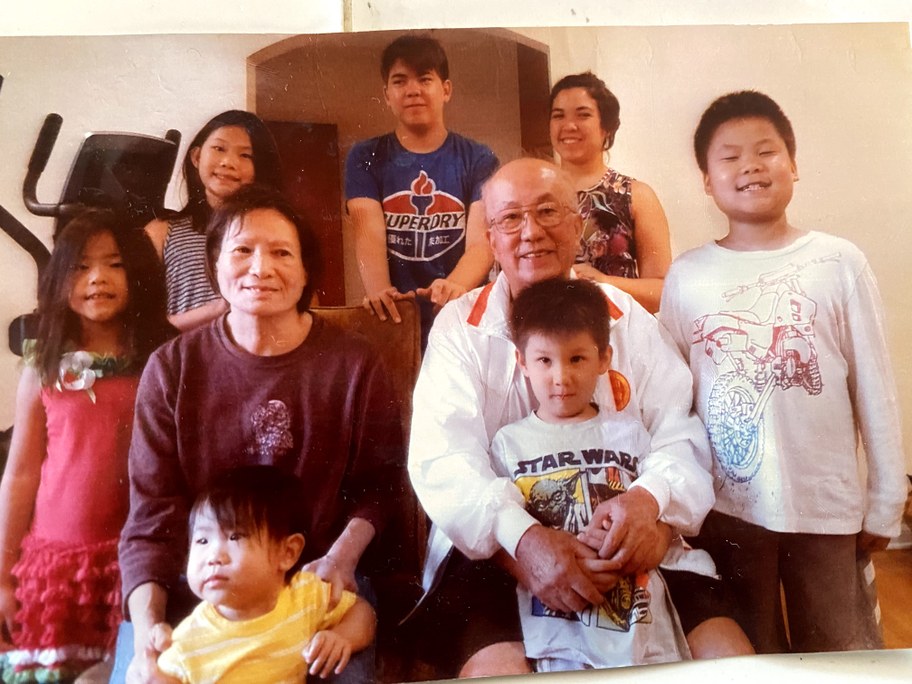 Kuei sits with her husband and her grandchildren. Photo courtesy of Nancy Chen and David Davis.

Eight years ago, Kuei took Nancy’s son, who was 3 years old at the time,  on a tour of Taiwan. “We barely could speak with them for six weeks. And when they came back, he was fluent in Mandarin, but had forgotten his English completely. It took him another six months to remember all his English,” says David Davis, Nancy’s husband.

“The grandchildren all were so bonded with Amah. They think she’s the smartest one in the family,” Davis adds.

As the pandemic began, Kuei took the utmost care to prevent catching COVID-19. She was a landlord, and a tenant of hers was less cautious. “She had a tenant living with her at that time, who did not believe the severity of the illness. He kind of thought that this was all media hype. And then he got sick. And that's how my mom contracted COVID.”

Kuei fought the virus for two months and was relegated to the COVID ICU ward. But after recovering from the virus – and testing negative — she was released to a less restrictive part of the hospital, where each family member was allowed to visit her for four hours daily.

“We were so excited about that, like planning, trying to coordinate a schedule [and] fighting about it. ... We were super excited to be able to see her again and sit by her bedside because that's the amount of care and love she gave us her entire life,” Nancy says. “Shortly after the transfer from the ICU ward, she passed.”

In the months following her mother’s passing, Nancy has chosen to focus on the legacy Kuei left behind.

“My mom was never one for showmanship. It just mattered to her that she, on a singular level, lived her life being true to her faith. And showing us the love that she did, for us that's enough. That was her purpose in life and she fulfilled it exceptionally.”