Waste in some landfills is down, but so is recycling. Here’s why Stay-at-home orders have resulted in a spike in residential waste. Photo credit: Pixabay.

You may have noticed your trash can is filling up faster than it did before stay-at-home orders. That’s happening across LA.

“We have seen an increase in the residential waste being collected by about 10-15%,” says Alex Helou, Assistant General Manager for Los Angeles Sanitation and Environment. He says that’s on top of the 3,600 tons of trash the city collects in a typical day.

Officials in LA County are seeing the same trend. This isn’t surprising with all the safety protocols and masks and gloves that many people are required to wear during COVID-19. 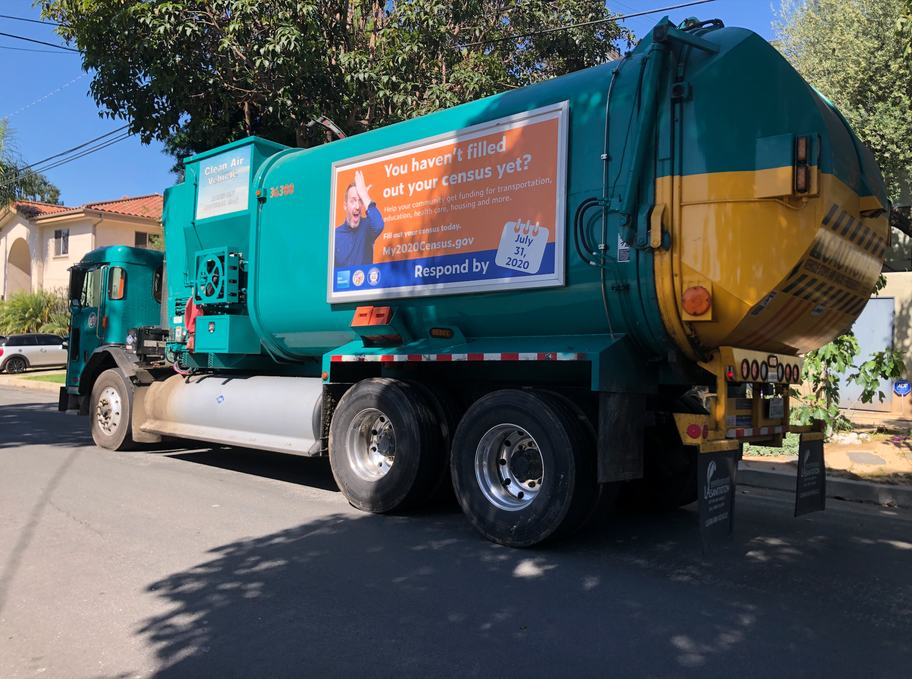 Trucks in the City of LA are picking up extra bags of trash in residential areas. Photo by Caleigh Wells.

One of the few places we’re still spending time during the stay-at-home orders: the grocery store.

“The thing that’s probably hit the hardest is not being able to use reusable bags anymore,” says Gelson’s Chief Merchandising Officer, John Bagan.

“We have a lot more bags going out the door,” Bagan says. “The paper bags in particular are going into short supply. We’ve gone through many many weeks’ worth of bags in a couple of days.” 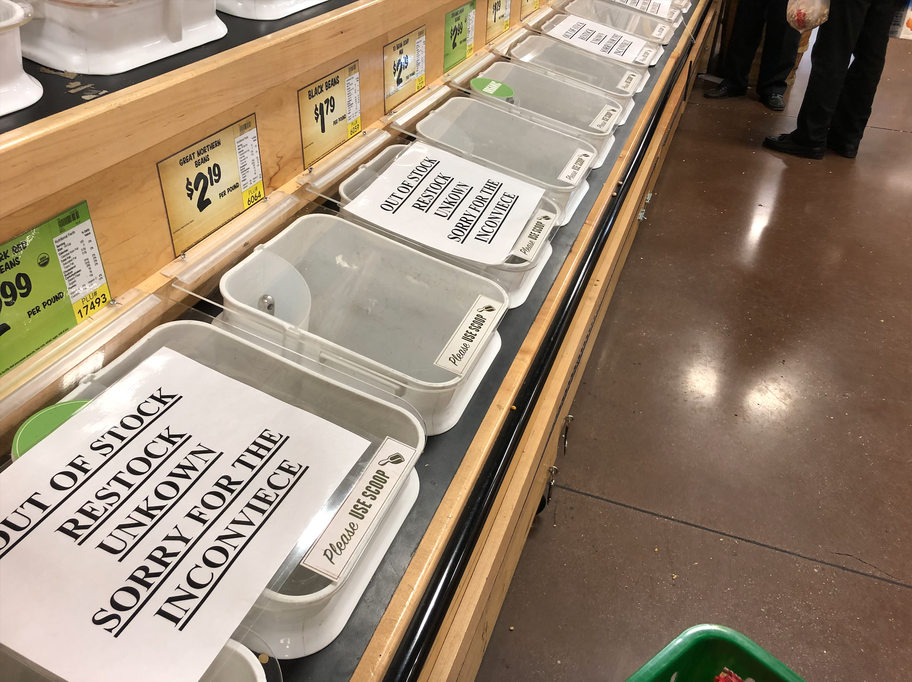 Grocery store bulk sections are closed or have been replaced with bagged alternatives. Photo by Caleigh Wells.

Gelson’s stopped allowing customers to bring their reusable bags into the building, like many other grocery stores. But it’s not just bags. Some high-end grocery stores have pulled out all the stops for shoppers in the name of customer safety.

In Bel Air, Thomas Pleger says his shop, Jayde’s Market, is spending 30% more to package food that didn’t used to be bagged or wrapped in plastic.

“Putting apples, for example, in sealed bags. Any fruit or vegetable where you eat the skin on it, we’ve taken extra measures to put it in a container or wrap it,”says Pleger.

The rise in packaging is partly thanks to Governor Gavin Newsom’s April executive order, which temporarily lifts a statewide ban on single-use plastic bags in grocery stores. With the 2016 bag ban on pause, some of the nearly 14 billion bags that were saved annually are heading back to the landfill.

Cities like Los Angeles, Glendale, West Hollywood, and dozens of others have their own local bag bans in place, but that hasn’t stopped grocery stores across Southern California from offering those thicker plastic bags advertised as being reusable.

He says if you’ve been watching closely, you might have also seen the garbage truck dump the contents of your black and blue bins into the same pile.

The blue bin recycling process relies on sorters in warehouses, standing shoulder-to-shoulder at conveyor belts, picking through your bottles, paper and cans. Some of those processing centers say they can’t operate with workers standing six feet apart, which means a lot of those materials aren’t getting recycled. 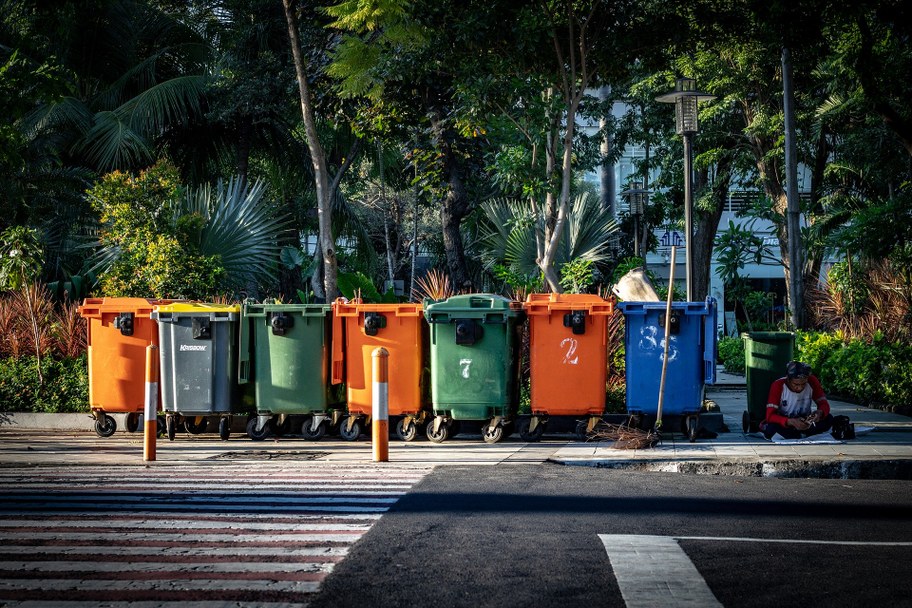 Some of these facilities have adapted, says Alex Helou with LA Sanitation. But they’re the outliers. “Facilities shutting down created an oversupply of recyclable material, so the price to process these recyclables went up,” Helou says. “So for example, prior to COVID-19, there were 17 facilities that could take recyclables. Now there’s [sic] only five.”

He says when a facility has reached the amount of recyclables it’ll be able to sort through in a day,  trucks that didn’t drop off their collections are turned away. Their contents are sent to the landfill.

There wasn’t much incentive for those other facilities to stay open. The recycling industry hasn’t been particularly profitable in the past couple years, especially since China and the other countries that purchased our plastics have sharply reduced the number of shipments they take from us.

In the wake of COVID-19, Helou says the slower recycling process and tanking plastic values — as oil prices drop — have made it all too expensive.

Pandemic or not, the City of Los Angeles is aiming to divert 90% of solid waste by 2025. Blue bin recyclables are included in that.

But in the wake of COVID-19, facilities have had to make drastic changes to keep workers safe and limit the spread of the virus.The current infrastructure won’t work long-term. Sorters standing farther apart means slower production time and lost profit.

But it’s not all bad news. Even with the amount of residential rubbish rising, the amount of trash the county is generating has gone down. Helou points to LAX producing up to 80% less trash.

According to Helou, the pandemic might push the recycling industry to reform and manufacturers to make items more eco-friendly.

“I see a positive silver lining on the horizon. It’ll just take us a little time to get there,” he says.

Recycling takes a hit from coronavirus

Waste in some landfills is down, but so is recycling. Here’s why

Extra food packages, more cleaning products, and the return of flimsy single-use plastic bags are hallmarks of the pandemic, and they’re piling up in our wastebaskets. While...

The Navy hospital ship USNS Mercy arrived in LA in March to help prevent a situation similar to New York City’s, where hospitals were overwhelmed and tent medical facilities...

The coastline of Southern California has been putting on a nightly show. Crashing waves are lighting up a neon blue as they roll in. Sometimes called “sea sparkle,” the...