Norma Bostarr works at the mass vaccination site at Dodger Stadium. She says in a typical day, she feels energized, tired, curious, hopeful, and grateful to serve her community. Photo courtesy of Carbon Health

One morning at the Dodger Stadium mass vaccination site, the first drivers of the day were just let in, and California had expanded vaccine eligibility to residents ages 65 and up. An older woman was driving the second car in line.

“This woman was just so excited. ... She got on her freeway for the first time in three years to drive herself … to her appointment, make sure she was one of the first people in line. And she was just so excited to get the vaccine,” recalls health worker Norma Bostarr.

Bostarr says the woman was shaking from nervousness, hopefulness and excitement.

“That step of getting in her car was something that she did with a happy heart and an open mind, and I think was so reflective of the way that we can stretch and grow and be resilient.” 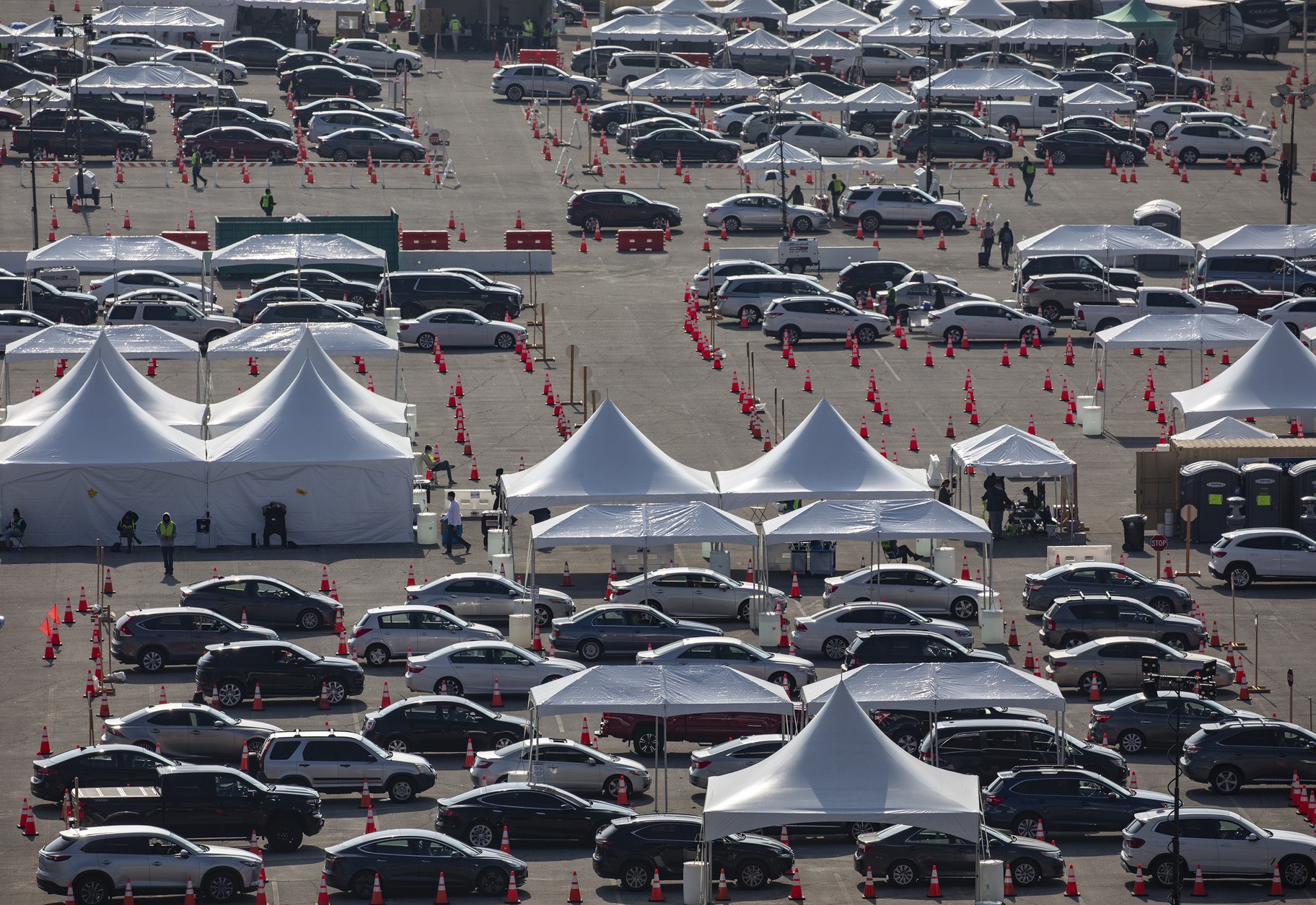 Patients drive up to be vaccinated at Dodger Stadium. Photo by Barbara Davidson of Carbon Health

On this particular day, Elise Janci, a vaccinator at Dodger Stadium, spotted a couple in their car, waving their hands desperately to get her attention.

“I approached them just saying, ‘Hey what’s up, can I help you with something?’ And they said, ‘You did our first vaccination. I want you to do our second, I remember you.’ And that was a great feeling.”

Janci makes sure she’s easy to pick out of a crowd because she always wears bright blue scrubs and a hat, and puts her hair in braided pigtails. 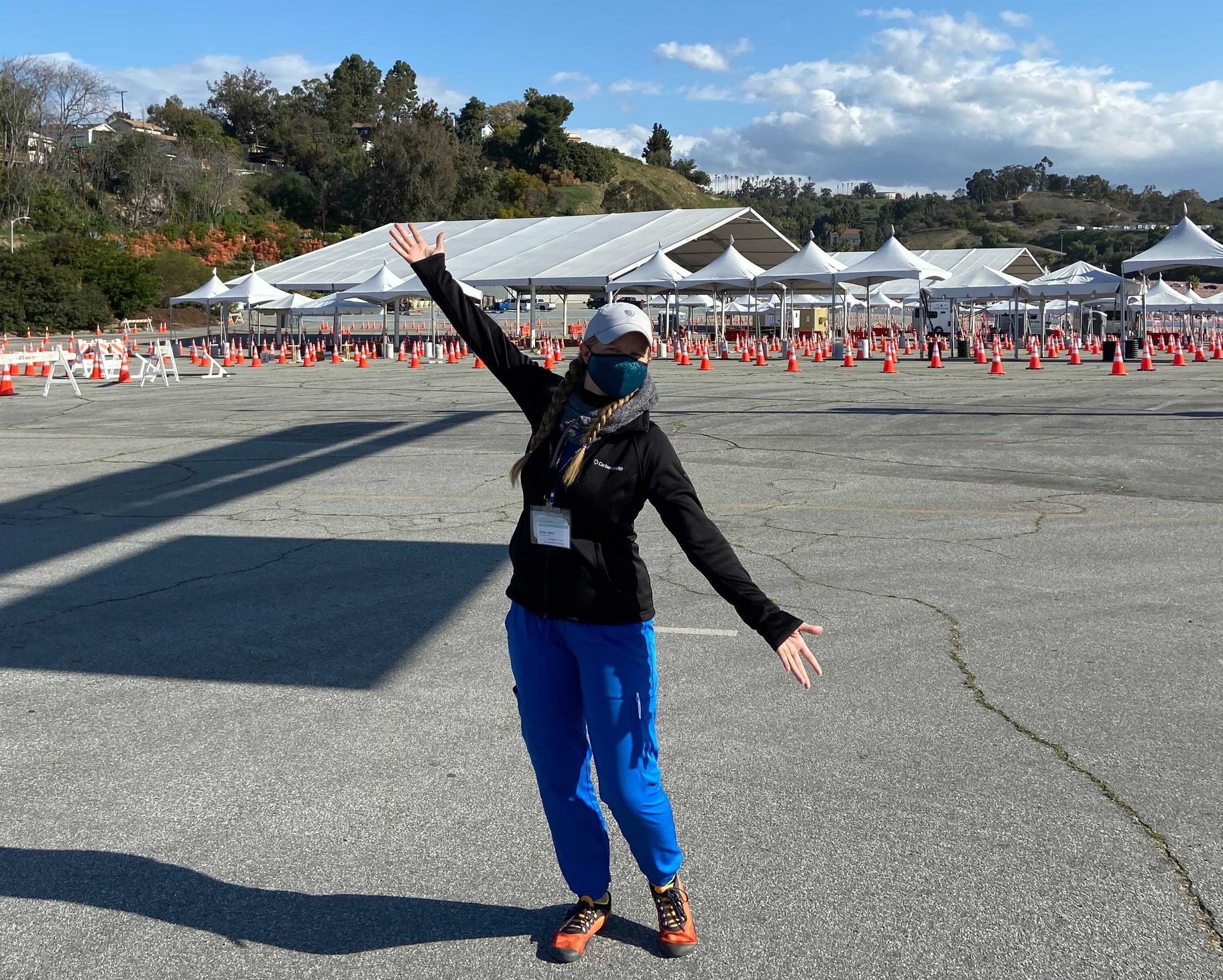 Elise Janci says she wears blue scrubs, pigtail braids and a hat every day, so she is more recognizable to patients and colleagues. Photo courtesy of Carbon Health

Compared to her previous job as an emergency responder working in the back of an ambulance, her interactions with patients are now quicker and more intimate.

Janci recalls one woman who arrived in scrubs between shifts and was emotionally overwhelmed.

“Just as I was about to introduce myself, she had sat down and just started bawling her eyes out. And she said, ‘I can’t believe it’s here. I can’t believe the vaccine is here,’” she recalls. “We get a lot of tears here, we definitely do. A lot of gratitude, a lot of feelings of relief and hope. … I had a[nother] patient who, in the car after I vaccinated her, had called me back over and handed me an origami heart that she had made, and said, ‘This is for you.’ And I still have it on my bedside table.” 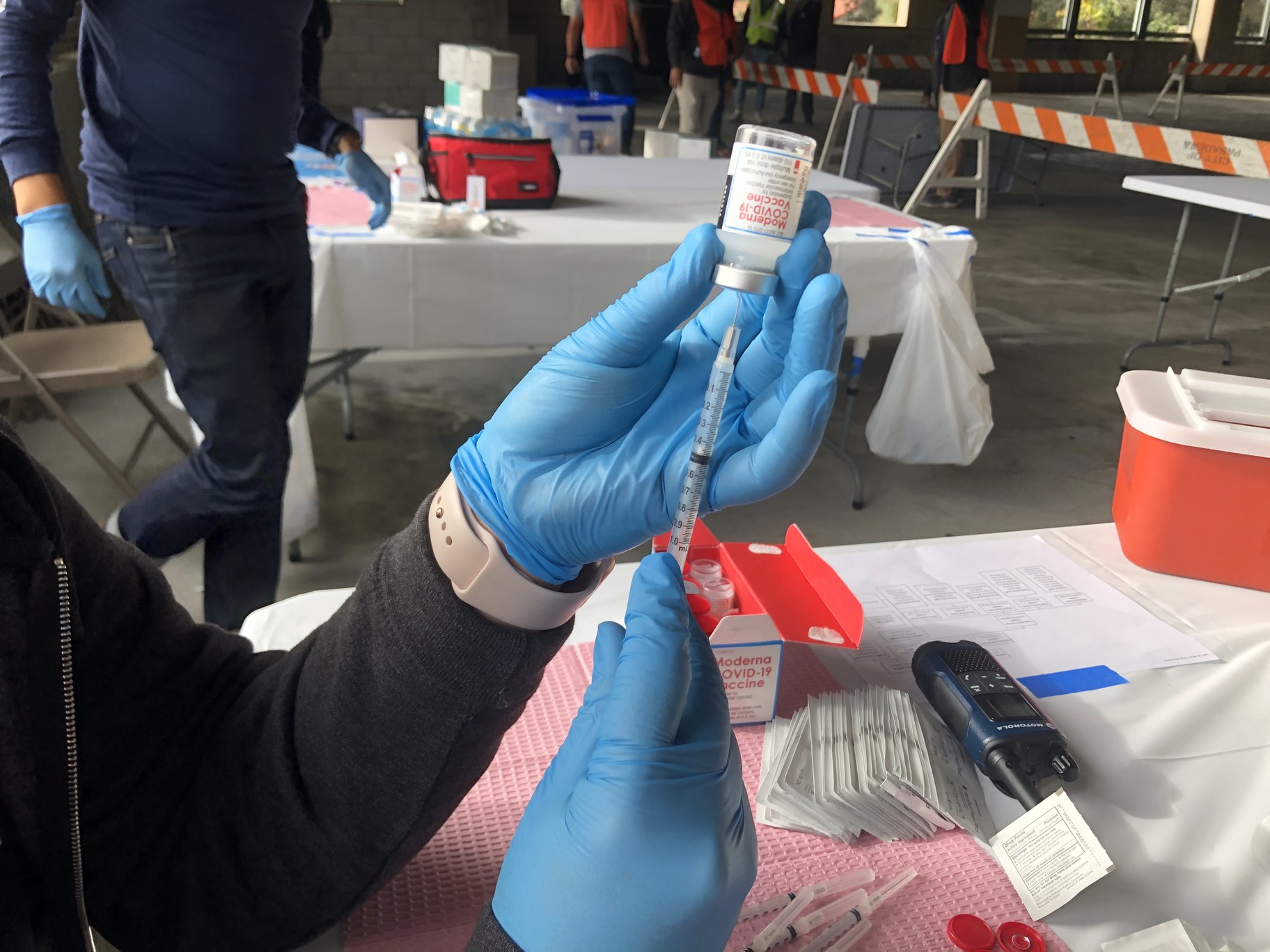 Janci says one of her colleagues wears an angel pin that a patient pulled off her lapel after getting vaccinated. Another vaccinator keeps in her cart of shots a toy she got from a kid who thanked her for “saving mommy and daddy.” Momentos like those are helping health care workers survive long, repetitive days, sometimes in the rain or hot sun, at distribution sites.

“I’ve seen people who have worked for many years, and you can see it in their eyes just how recharged they are when they get to spend time and work on these sites because you’re doing what you signed up to do in health care, but you’re getting to do it at an incredible pace and density that you just don’t get in a lot of other practice environments,” says Dr. Sujal Mandavia, Chief Medical Officer of Carbon Health.

Mandavia is an ER doctor, and he says in his 25 years practicing medicine, this is all new. “I’ve been really fortunate because I’ve worked in many different environments, all types of hospitals, been able to work in disasters, whether it’s earthquakes here locally, hurricanes, you name it. And I have to say, this is some of the most rewarding work I’ve been able to participate in.” 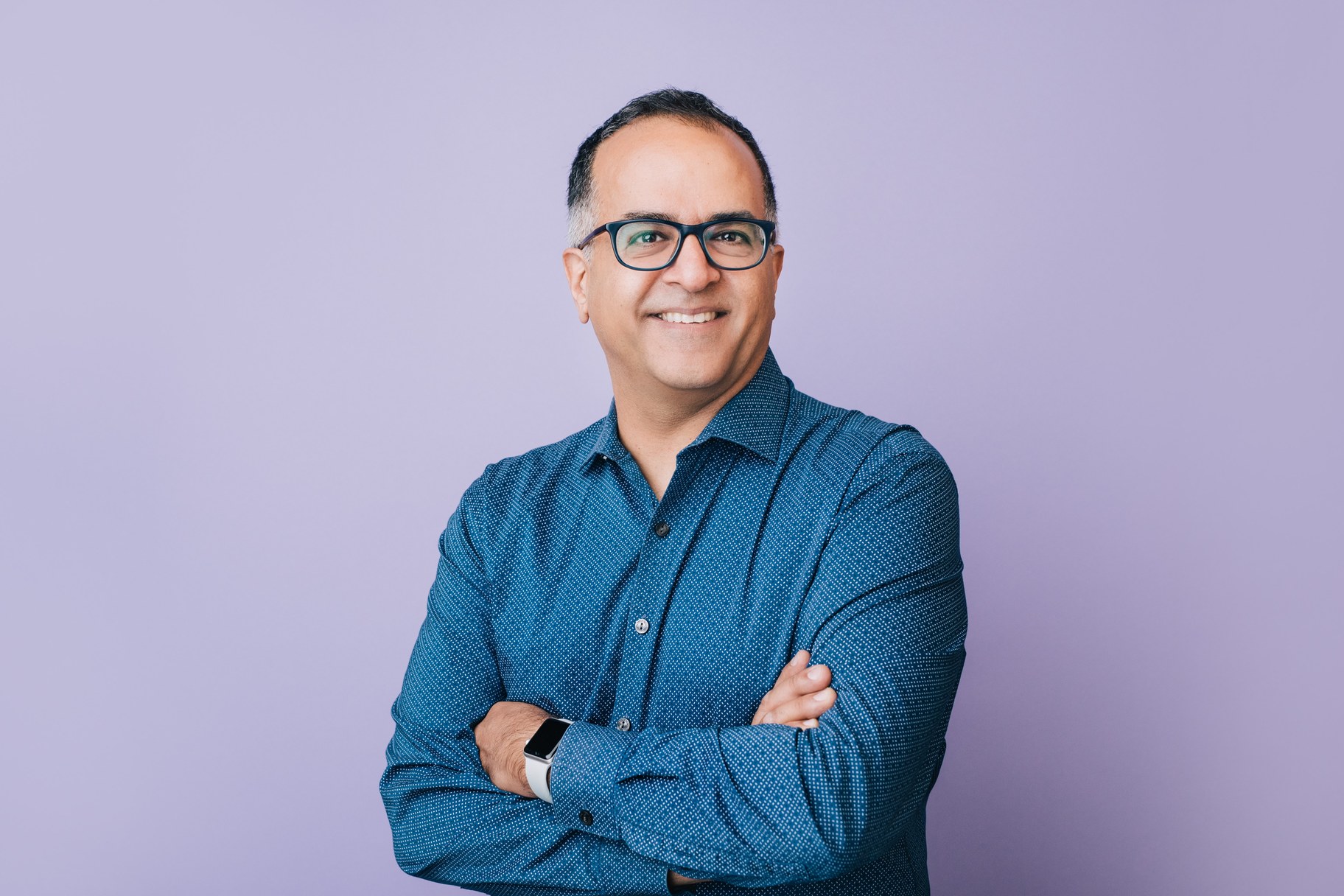 But that feeling isn’t limited to the large-scale sites, or even to the people administering the vaccine.

Andrea Green checks people in at one of the county’s mobile sites operated by Community Organized Relief Effort (CORE), a group that travels to LA neighborhoods with some of the lowest vaccination rates. Residents there are usually people of color, or they make low incomes.

“I have an emotional connection to neighborhoods that I never knew, and that’s really gratifying,” she says. “It’s allowed me to get to know neighborhoods and people that I just hadn’t had the chance to over many years.” 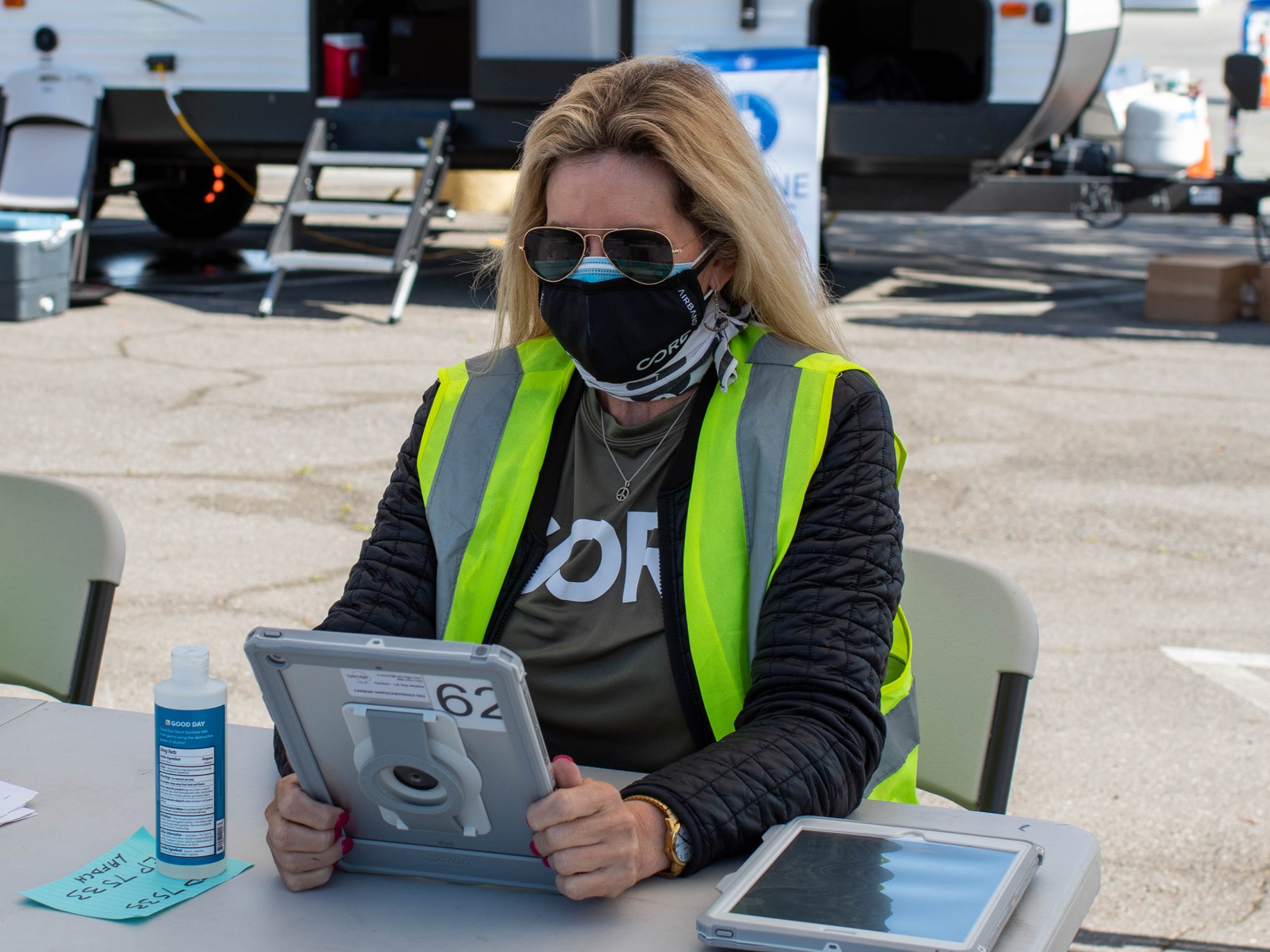 Andrea Green checks in patients at a mobile site in the city of LA. Photo courtesy of CORE.

At first, she was testing patients at the mobile sites, and she says back then patients were frequently frustrated or scared. Once she switched from tests to shots, she felt the difference instantly.

“On the very first day, I was on the first mobile team that went out to Algin Sutton. And the people who came had been inside for months. They had not had a conversation with anyone outside their homes. We became a lifeline for them. They were emotional. I have cried with many a person who got emotional just saying how excited they were to be getting the vaccine,” she says.

Typically she’s in neighborhoods in South LA, but on this day, she’s back in Chinatown, checking in patients for their second doses of the Pfizer vaccine.

“We've created these wonderful relationships, and once we met them once and they come back three weeks later, they're like our friends. We ask how they’ve been, and they recognize us. It’s really wonderful. It’s like having a lot of aunties and uncles in different parts in LA.”