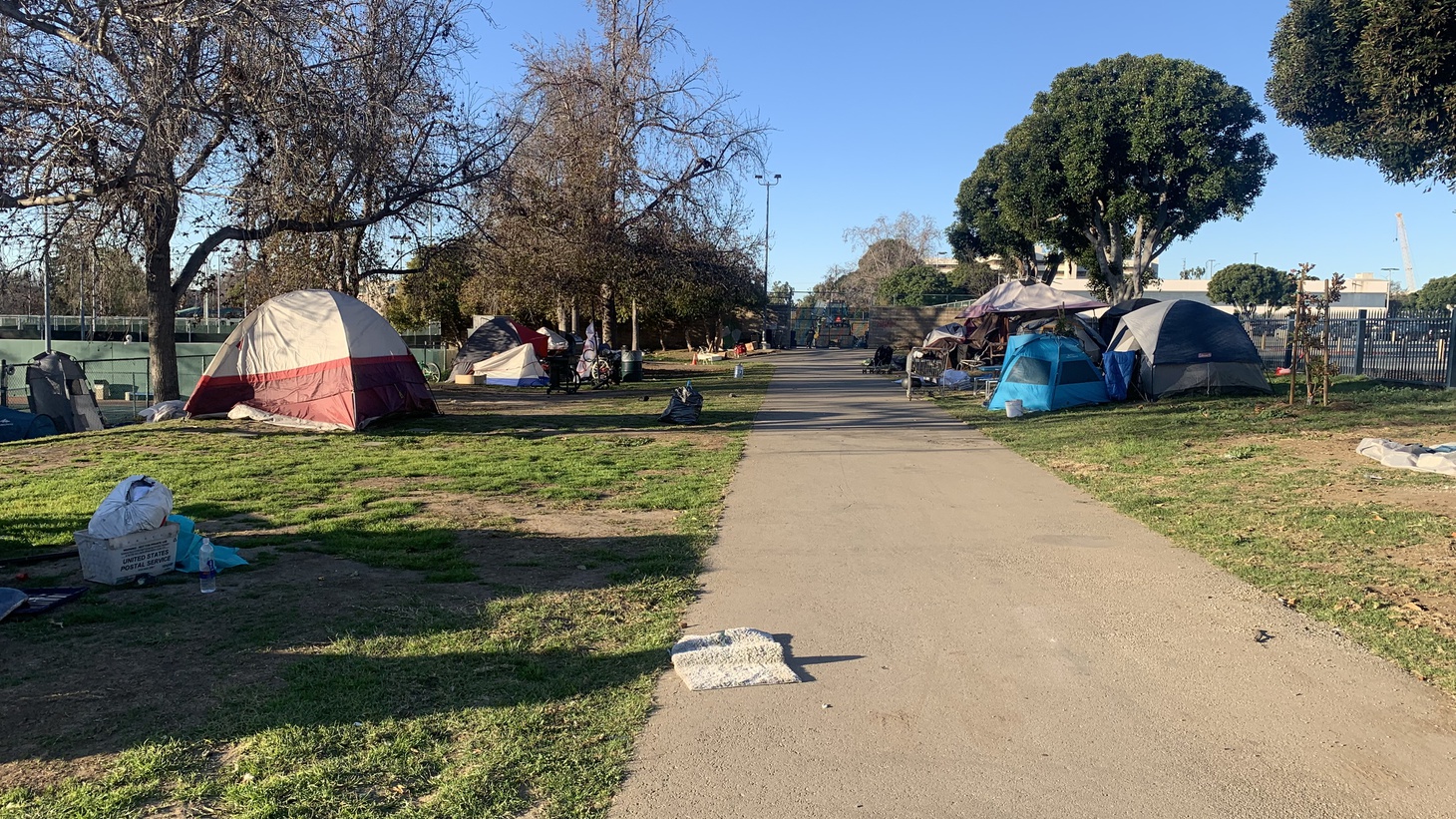 Westwood Park is one place where city officials have banned camping under a new law, though they’re not enforcing it yet. Photo by Anna Scott.

Last summer, the LA City Council passed a new set of laws to regulate street camping at certain locations. Each councilmember can choose spots to ban camping, near schools or parks or driveways. Enforcement was supposed to come with an intensive outreach process to link unhoused people to services and housing opportunities, and ideally move them off the streets.

But KCRW has found the outreach is patchwork, and it’s difficult to get a clear picture of what assistance is even available, or how often people are moving indoors under the new policy versus shuffling from one street corner to another.

“It was meant to be accompanied by a street engagement strategy,” says Stephanie Klasky-Gamer, president and CEO of the nonprofit LA Family Housing. “That didn't happen.”

So far the council has approved 201 locations around the city as no-camping zones. Signs have gone up at 45, according to the office of the city’s Chief Administrative Officer, with 11 more scheduled to post this month.

Before posting signs, city council offices are supposed to work with the Los Angeles Homeless Services Authority (LAHSA) to carry out a detailed, step-by-step outreach process. It involves surveying anyone camped in these spots, matching them to whatever services and housing opportunities are available, and documenting what was offered.

But it’s hard to offer shelter when there aren’t many beds. In an email, LAHSA spokesman Ahmad Chapman says that while the agency doesn’t have “a real-time look into the shelter system,” and couldn’t give an exact number of open spots, “I can say that most shelter beds are spoken for and that this highlights the need for more shelter and permanent housing.”

He also says it would take weeks to compile information about how many people have moved inside as a result of the city’s new policy.

At two cleanups at new no-camping zones in the Silver Lake area last week, unhoused people said they’d been offered food and water in recent weeks by the nonprofit Urban Alchemy, but not shelter. One man, who gave his name only as “Summer of 89,” said he’d been contacted once by outreach workers associated with the LA Homeless Services Authority some months ago.

“They said … ‘We’re going to put you on the list for resources to get housing,’” he recalled. “This was several months ago, and I still haven't had word on that back.”

A spokesman for Mitch O’Farrell, who represents the area, says that while he has carried out street cleanups to keep sidewalks safe and passable, he’s not yet enforcing the camping bans if unhoused people return. Signs have been posted at 16 locations in his district so far. The spokesman, Dan Halden, says that the district has different kinds of interim housing available, but more detailed information and the number of people who have moved indoors under the new policy so far lies with the Homeless Services Authority.

At least one City Council member believes that LA’s district-by-district approach to implementing the new laws exacerbates the lack of beds and services.

“Los Angeles has essentially built a system where each of the 15 council districts kind of handle the issue for themselves,” says Nithya Raman, who represents District 4, which includes Larchmont, the Hollywood Hills and Sherman Oaks. “And the ways in which this plays out are absurd and incredibly sad.”

Raman hasn’t submitted any locations under the new law. She says she is working in other ways to keep sidewalks accessible, and to create more temporary and permanent housing in her district.

Raman says one problem with the new policy is that council members generally reserve shelter beds and housing units for people who are homeless in their districts, which makes it harder to get people off the streets.

Klasky-Gamer, head of the LA Family Housing agrees: “We had somebody experiencing homelessness set up a tent in the pouring rain a few weeks ago right outside my office. … Unfortunately, my office and the corner where these folks set up their tent was in one council district, and while we had vacant beds in three interim housing sites nearby, they were in three different council districts. They stayed outside for two weeks in the rain.”

In the west San Fernando Valley, City Councilmember Bob Blumenfiled has designated 25 no-camping zones. He says the LA Homeless Services Authority counted 16 people in those locations in November, and nine have moved indoors.

Blumenfield defends the district-by-district approach. He says it forces politicians and their constituents to create shelters, housing and services in every part of Los Angeles, instead of trying to push the problem somewhere else.

“That's what we did for decades,” he says. “And it didn't work for decades. When there were homeless people, what happened to them? They got sent down to Skid Row, because that's where the openings were.”

For many neighbors who live in homes near encampments, there’s frustration that despite new policies, they don’t see progress on the streets.

“I'm so used to seeing this living here. And there's nothing they can do about it,” says 80-year-old Angel Sepriano, who lives in a house at the end of a cul-de-sac in East Hollywood next to a designated no-camping area.

As a cleanup got underway there last week, one unhoused man slept on the street at the time, wrapped up in a sleeping bag.

He asked to remain anonymous, but said after no-camping signs went up, a few people moved their tents over a fence from the sidewalk to a strip of dirt beside the freeway – just outside LA city limits. He told KCRW he receives health care in Venice, but nobody had offered him shelter or services in recent weeks.

Sepriano said he doesn’t blame the unhoused for the situation.

“He's my neighbor,” Sepriano said about the man sleeping across the street. “That hat he has on was mine. When it gets cold and it's raining, he's got my golf jacket. Do I think he likes living like that? I can't not feel what he's going through.”

LA’s ban on homeless camps in specific areas was supposed to be tied to offers of help. Those offers are not always coming, leaving everyone frustrated.

Watson “Al” Allison discusses his decades on death row, and how his freedom and career path inspires others. Law professor Ellen Kreitzberg explains the bias behind the...