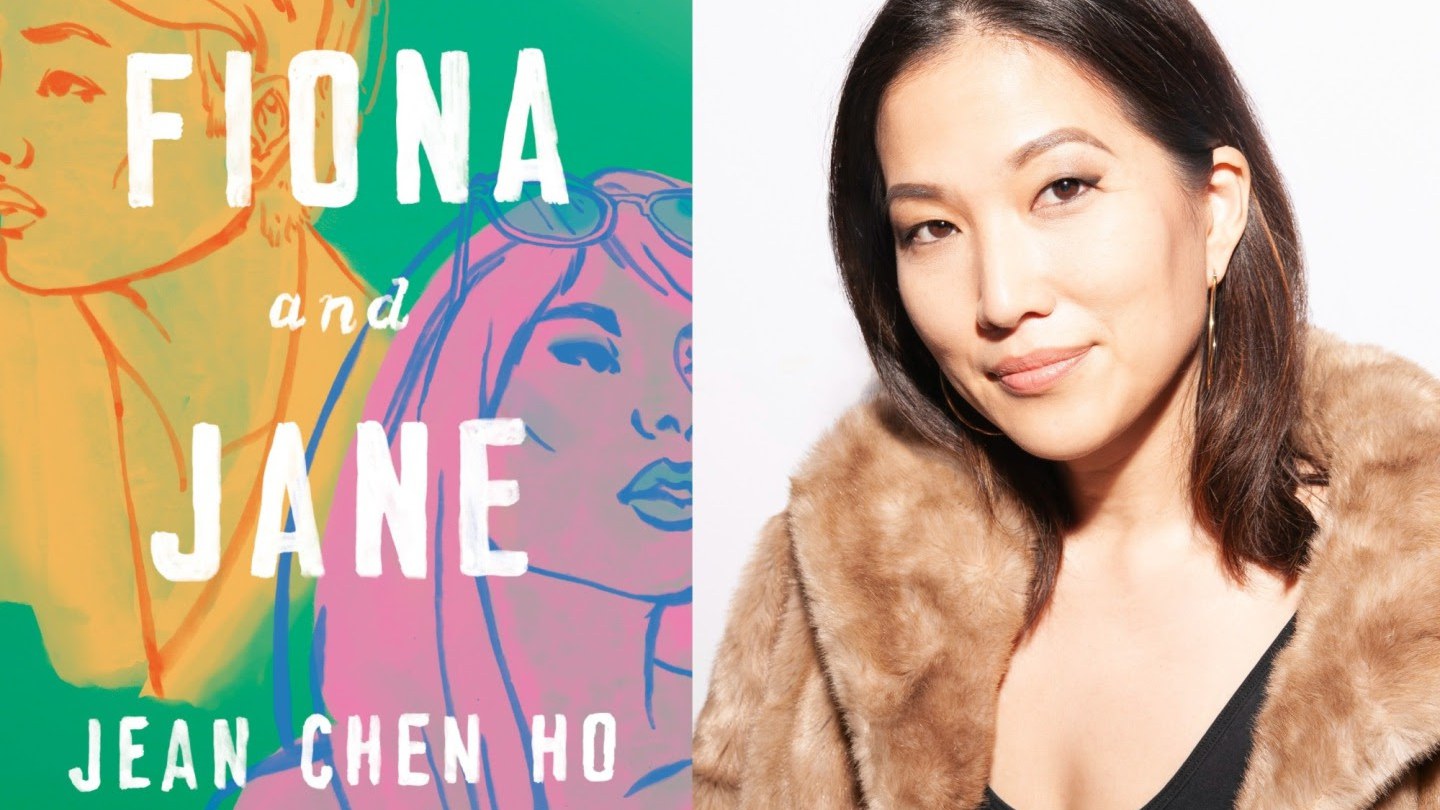 “These characters get to have so much more fun than I have had in my life, and they also get into a lot more trouble. … ​​But the feelings that they go through and the growth are certainly things that I have experienced. So I think it would be fair to say that I share emotional DNA with these characters,” says Jean Chen Ho, author of “Fiona and Jane.” Book cover courtesy of Penguin Random House. Author portrait by Julian Sambrano, courtesy of Jean Chen Ho.

Jean Chen Ho’s debut novel, “Fiona and Jane,” is a collection of short stories about two Taiwanese American women who grew up in LA and have been friends for 30 years. They met in elementary school and have grown up sometimes together, sometimes apart.

“Through their friendship and other relationships in the book, they explore sexuality, identity, heartbreak, all kinds of fun stuff like that,” says Ho.

She explains that 90 to 95% of the circumstances in the book are fictional, though people often ask if they’re related to her personal life.

“These characters get to have so much more fun than I have had in my life, and they also get into a lot more trouble. … I put them in really heartbreaking situations sometimes. … ​​But the feelings that they go through and the growth are certainly things that I have experienced. So I think it would be fair to say that I share emotional DNA with these characters.”

Fiona was born in Taipei, and at age 6, she emigrated to Southern California with her mom. She goes to New York to “stretch her wings,” but eventually returns to LA when she’s in her 30s. The latter part of the book is about Fiona finding her footing in LA as an adult, and she relies on Jane, who was born in the U.S. to immigrant parents, and has lived her whole life in LA.

Ho notes that the women also grew up with an important Korean friend, and a special thing about growing up in Southern California is being able to have diverse friends.

“I also grew up here in SoCal, where I got to have lots of different kinds of Asian American friends, whether Indian American, Pakistani American, Korean American, lots of people with different migration histories, whether it was generations ago, or it was just their parents a few years ago. … That is a very particularly Southern California experience that I tried to put in the book,” she says.

I never agreed to it, but after Carly and I split up, Won appointed himself my life coach. His first directive: I had to swear on everything I wouldn’t call Carly or try to see her; no exceptions, never again, bye girl, have a nice life.

“Remember me and Jesse?” he said.

“Camping trip in Joshua Tree. Fantasia’s quarter-life crisis slash birthday weekend.” Won narrowed his eyes at me across the table. “What go-go boy are you talking about?”

“Somewhere with Carly, obviously,” he said. “Being boring,” he added. “Anyway, Jesse should’ve been a one-night stand. Then my stupid ass couldn’t say no to him once we were back in LA.”

The server brought out our food: grilled pork banh mi for me, pho tai with the raw beef on the side for Won. Any time he deigned to travel east of Fairfax, Won insisted on eating at this tiny spot tucked inside Chinatown’s Central Plaza, no more than four tables here, the brown wood clock in the shape of Vietnam on the wall behind the cash register. Usually, I had to drive west to see him.

Won picked up a wedge of lime and squeezed it into his soup bowl, cupping a protective hand around it. “Then he has to tell me about his mom’s dementia, how he’s the only one who takes care of her, blah blah blah—”

“Don’t compare me and Carly to one of your meaningless sexcapades, please.”

“Point is, there’s only one way you get through these things,” Won said. “Cold turkey.” The next step in my regimen, Won instructed, was keeping a journal. “Your first assignment is to write down all of the things you hated about her,” he said.

“There’s nothing,” I replied. “I didn’t want to break up.” I shook my head. “I shouldn’t have gotten so—I lost it. When she said—”

“This is a safe space. You can tell me,” Won said. He leaned toward me and lowered his voice. “She had that white girl funk downstairs, didn’t she.”

I told him he was fired, effective immediately.

“I don’t know how you do all that shit anyway. It looks so scary, all that skin, like it’s about to attack you.” He clawed the air with his hands in loose fists, fingers half-curled, as if defending himself against a predator.

“You’re literally the stupidest person I know,” I said. My mouth was half-full, and a bit of cilantro flew out and landed on the table. “I do mean literally.”

“Okay, okay. Enough joking around.” He reached into the canvas messenger bag that hung from the back of his chair and took out a small blue notebook, bound with a spiral ring. “You have to make a list,” Won said. “When you start feeling all nostalgic, remembering the good times, you’ll have this in your hands as a reality check.”

I touched a finger to the blue elastic band running down the right side of the cover.

“What if I never meet anyone ever again,” I said after a moment.

“Jane,” he said. “We’re twenty-six. What are you talking about?”

“What if Carly was the one?”

“If we’re both still single by the time we turn thirty, let’s get married,” he said. “I’m serious, Jane. Think about the registry—”

“Your mom would be so happy,” I said.

“We should invite Miss King,” he added.

“What about Fiona?” Then he asked if I’d talked to her lately. I mumbled something about the three-hour time difference between us.

“She broke up with Jasper. Did you hear?” he said. “I don’t know how, but they’re still living together.”

“You should call her,” he said. “She’s going through major—”

Won looked at me for a moment but didn’t press it.

“I’m going through some shit, too.” I stared back at Won, and he knew I wasn’t just talking about the breakup with Carly. Suddenly the joke he made about us getting married wasn’t funny at all. It made me think of my parents. My dad. Then I was angry, and I wanted lunch to end.

I made up an excuse about forgetting an appointment. Won knew I was lying, but I didn’t care.

“Take the notebook,” he said. I swiped it off the table before I cut out, leaving Won by himself.

Trailblazing SoCal surfer Joyce Hoffman gets her due with bronze statue

With hardly any rain expected in February, what’s the status of CA drought?

The December storms weren’t enough to get Southern California out of the drought, and February has almost no rain in the forecast.

The novel “Fiona and Jane” is about the 30-year friendship between two Taiwanese American women who grew up in LA.

A bronze statue of Dana Point surfer Joyce Hoffman was recently unveiled. It’s believed to be the first life-sized statue of a female surfer in the country.