Gas stations could turn into public parks or charging stations once new gas-powered cars are banned in California. Photo by Pixabay.

In sprawling Southern California, known for its car culture, it seems like there’s a gas station on every corner. But that might not be true much longer.

“I had more questions than answers. I was like what? I was like wow okay, that’s a bold statement,” says Porterville gas station owner Taha Saleh. “I’m for whatever will make our world more sustainable. ... The only concern I have is, you know, my livelihood is a concern.”

Thousands of car dealers, mechanics, and gas station owners like Saleh are all trying to figure out what this mandate means for them. But it’s still unclear just how realistic that vision is.

Let’s start with Chris Hawthorne, LA’s Chief Design Officer. His job is to dream up what the city will look like in the future. He says our power infrastructure will be a lot less visible in 15 years.

“You’ll be able to charge your car or you e-bike or scooter at all of these different places, and it will begin to integrate this technology and indeed this infrastructure into more types of infrastructure than has the case,” he says. 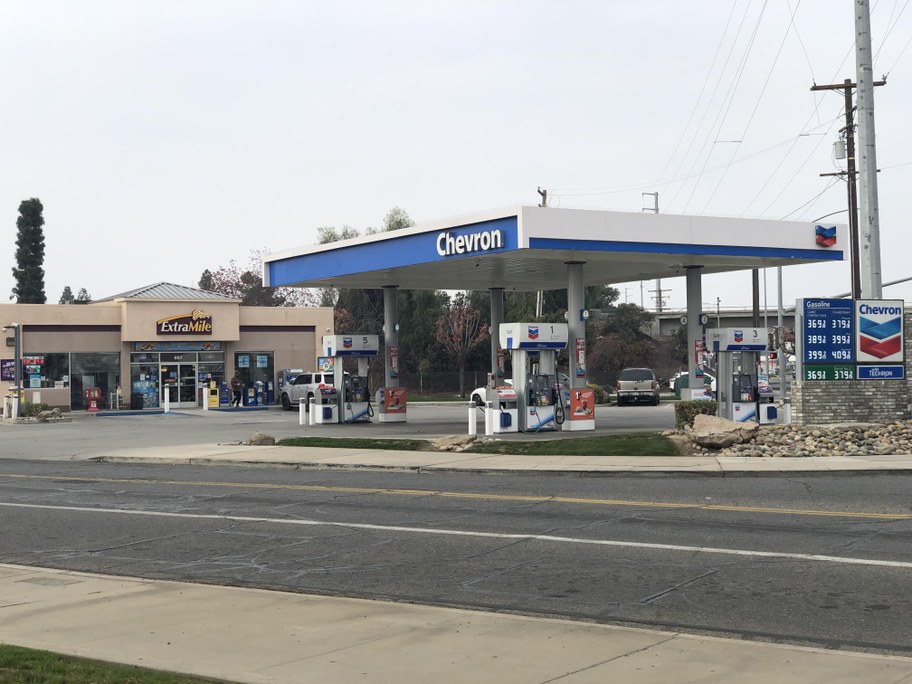 Taha Saleh hasn’t decided what to do with his gas station in Porterville after the mandate goes into effect in 2035. Photo courtesy of Taha Saleh.

It sounds plausible on paper, but Gil Tal says there are a lot of obstacles between us and this electrified world. He’s director of the Plug-in Hybrid and Electric Vehicle Research Center at UC Davis, which means his job is studying just how feasible this all-electric driving force is.

“If we think about barriers, the main ones are infrastructure, supply, and then the third thing is this collaboration with the other states, because we cannot succeed as an island,” he says.

The city of LA has more commercial electric vehicle chargers than any other city in the country, at just over 10,000. But that’s in a city with millions of registered cars. It does help that homeowners can install chargers in their garages. But most Angelenos rent.

“We’ll need to install chargers for garage orphans in a way, for people who live in apartments … who rent, who cannot install a charger in their home, and so on,” says Tal.

But even after they’re installed, there’s the second obstacle: supply. The state still needs to build the solar panels and wind turbines to power them all, and the technology to store that energy when the sun sets and the wind stops blowing. That’s as California’s grid is already strained during increasingly hot summers.

Meanwhile, Nevada and Arizona don’t have the same mandate, and their car dealerships are just a couple hours away.

“It won’t work if it’s going to be California alone,” Tal says. “If we will be able to buy a cheap gas car in Nevada, then bring it back to California, the 100% goal [of all new cars being electric]? We’re not going to meet this goal.”

Tal says in the past three years, less than 10% of new cars sold are electric.

Dave Greiner isn’t convinced we’re going to get to 100% in 15 years. He’s been an auto mechanic for 50 years. He specializes in vintage cars at his shop, Proformance Motoring, in Orange.

And he’s not a fan of Governor Newsom’s mandate.

“I’m trying to think of a word besides ridiculous, but that’s the first thing that pops into my head,” he says. “We can’t even supply power for the state, much less power for recharging all of these cars, not to mention the legality of telling people what they can and can’t sell.”

He calls Newsom’s mandate a political stunt, and says it’s forcing drivers — and the businesses that serve them — to reimagine an industry too quickly. “If the marketplace is allowed to work, the consumer will decide what the best way to go is. And the other question is where the electricity is coming from. A lot of the generators are natural gas fired, and if fracking is currently being cut down on, there won't be enough energy to run those and solar won’t be enough.”

Greiner says he doesn’t see it as a threat to his own business. He’s close to retiring, and it could be a while before electric cars reach the vintage mechanic market.

But gas station owner Taha Saleh in Porterville is 38, and he’s supporting three kids. His life is built on gas. He started working his family’s business as a kid. It started as a convenience store with a few gas pumps just off the main road north of Bakersfield. Now he’s running it, and he relies on the gas-powered cars passing through to put food on the table.

“There have been a lot of industries that have gone through this, where there’s been this massive change and people have lost livelihoods for generations, and that’s kind of our situation. It’s my second generation,” he says. “I’ve always told my kids, ‘Hey go to college, get out of here, go do something.’ I’ve got kids that are in college, and they always said, ‘My backup plan is the store.’ And I don’t think that’s true anymore.”

His story is actually very common. The vast majority of gas stations aren’t owned by Chevron, Valero or Exxon. They’re leased or sold to small business owners like Saleh, the same way that McDonald's stores are franchised. Even if Saleh did invest in the infrastructure needed to revamp his station, it’s not as simple for him as pulling out pumps and putting in chargers.

Saleh can’t legally sell electricity — only utilities can. He can only sell the time someone spends at a charger. As EVs have longer and longer driving distances, he’ll never compete with the price of the electricity at home. And soon he’ll be competing not just with other gas stations, but grocery stores and shopping malls too.

Saleh actually supports the mandate as an environmental policy. But as a business owner, he’s not sure what he’ll do next.

The first thing is minimizing investment, minimizing how much I put into it now that I know there’s a possible end game. I don’t know what my next move is. ... I'm not going to buy new pumps. It’s like I just have to squeeze every penny out,” he says. “I’ve got to maximize what I can get out of it …  and hope for the best.”

California is banning the sale of new gas cars starting in 2035, as part of its goal to curb carbon emissions. People working in the automotive industry are nervous about...

With California banning the sale of new gas cars starting in 2035, drivers will have to seek alternatives. The two main options are electric vehicles (EVs) and hydrogen fuel...

“A hippie until the end.” That’s how Maile Walker describes her mom Sheri Walker, who passed away from COVID-19 complications on July 24, 2020.