Maurice Harris poses for a Valentine’s Day ad on his Instagram page. Photo by Benjamin Gottlieb.

His thick, black beard pokes out from under a faded, pink wig.

“I watch a lot of YouTube tutorials on doing makeup,” Harris says as he gets ready to star in an ad for his flower business, Bloom & Plume. He’s focused on the mirror of his portable vanity. “But I never try it, actually, until the day I actually have to ... which is an interesting technique, I think.” 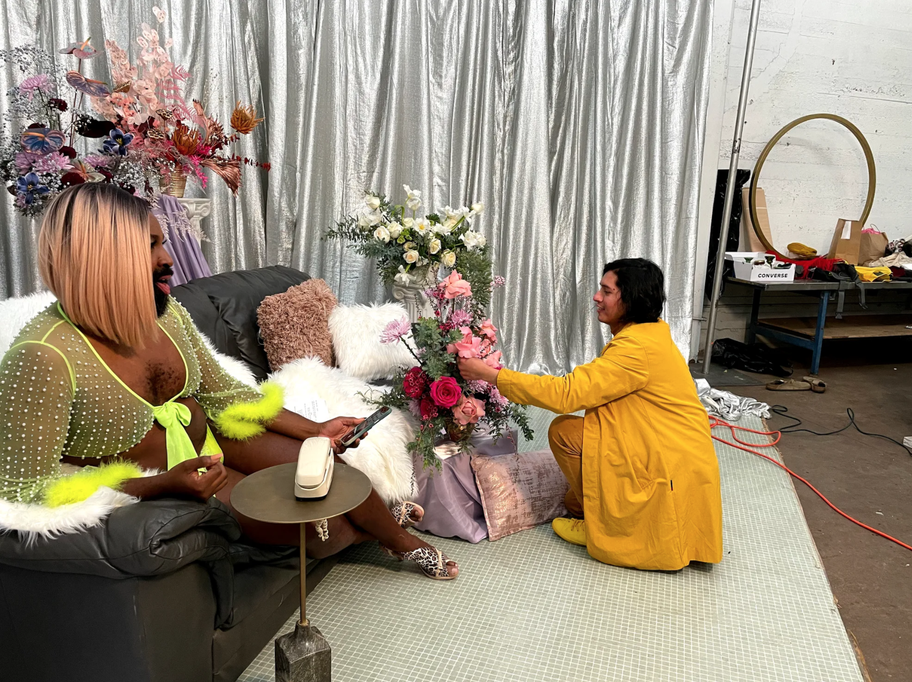 Maurice Harris (left) walks through the script for a Valentine’s Day ad for Bloom & Plume while filming in downtown Los Angeles. Photo by Benjamin Gottlieb.

The character Harris is playing today, he says, is “Becky,” a personality he revisits both to promote his brand and offer his own social commentary on gender norms and body image.

“The idea that sex sells is so interesting to me,” he says. “But I try to turn that upside down.”

Before the pandemic, there was little doubt his products were selling and his social commentary was resonating.

His Instagram page boasts hundreds of thousands of followers. He is a featured judge on the HBO show “Full Bloom.” He even worked on “Centerpiece,” his own program for the now-defunct, short-form streaming platform Quibi. 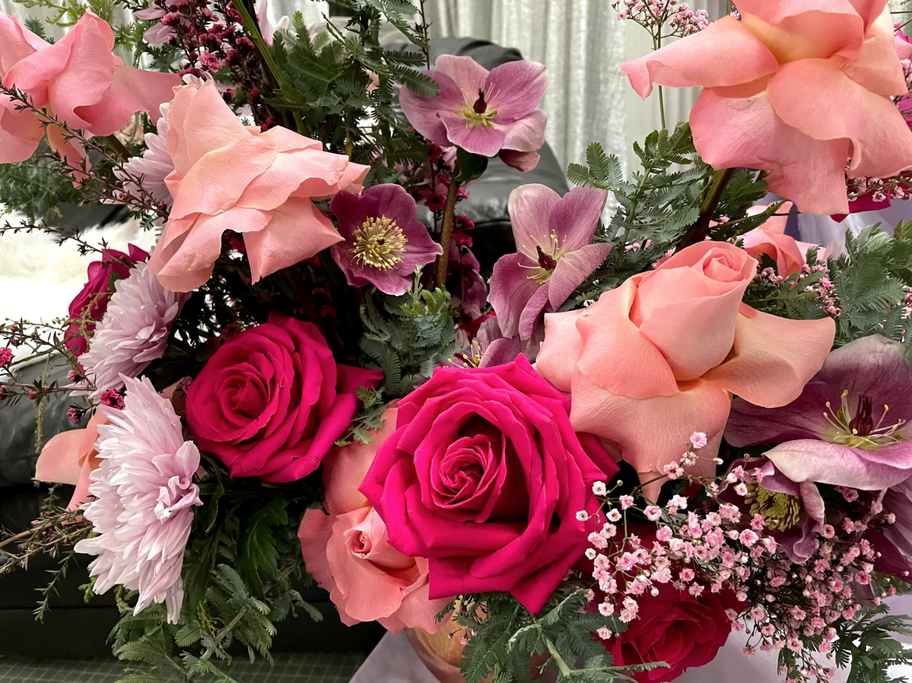 One of Bloom & Plume’s flower arrangements for its Valentine’s Day 2021 collection. Photo by Benjamin Gottlieb.

But like many other small business owners who were successful prior to the outbreak, Harris now faces a sobering reality. His flower business — and adjacent coffee shop under the same name — are especially vulnerable to local and state health restrictions necessitated by high COVID-19 infection rates.

“When the pandemic hit, we just stopped working because everything left and right was just getting canceled,” Harris says, sitting inside his floral design studio on West Temple Street near downtown LA. “Sister ‘Rona showed up and she was just like, shutting it all down.”

Now almost a year later, things still have not recovered. 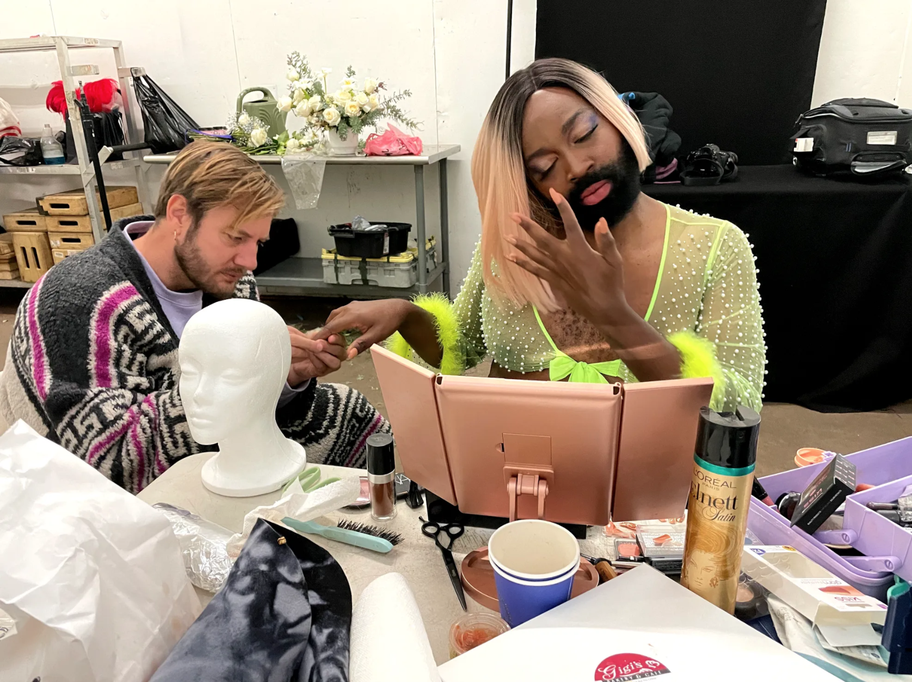 Harris’ coffee shop has customers, but with indoor dining still prohibited, his business is underperforming. In the case of Harris’ flower studio, his arrangements are meant to be seen by lots of people. Think upscale birthday parties or company holiday gatherings, events that just are not happening right now. It all translates to tight finances and anxious workweeks.

“I had to borrow money from my brother to pay the rent for [the flower business] this month,” Harris says. “I'm finally like, at my wit's end. I'm supposed to be getting checks. I'm checking my account every hour to see if a wire has gone through. One of my accounts is negative … like it's actually, in real time, it's insane.”

Despite his current financial worries, Harris has been more fortunate than other small business owners in the LA area. In fact, no city lost more businesses (both temporarily and permanently) than LA between March and September of last year, according to a survey by Yelp. During that time, roughly 15,000 of them closed their doors.

As for Harris, he was able to secure a PPP loan last year from the U.S. Small Business Administration. He also saw an uptick in patronage last summer following the Black Lives Matter movement that swept the nation.

Still, Harris says, he will need to qualify for additional federal dollars this year if he is to keep his employees on payroll and his rent paid.

“If we don't get PPP and the business doesn't turn [by] this time next year, we probably won't be open,” he says. “That is the reality of it.” 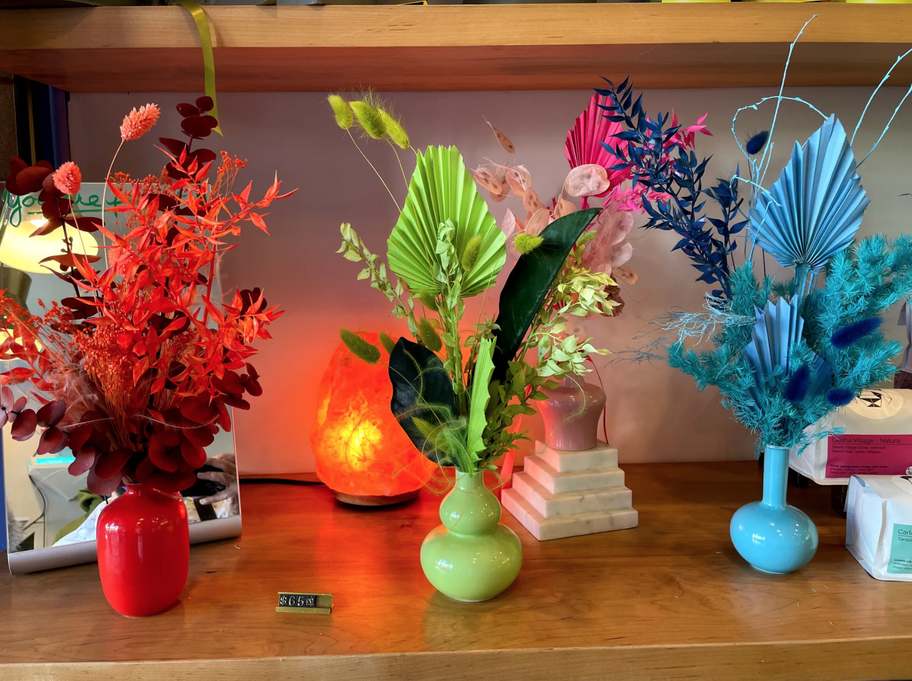