Mai Lindquist amidst the rubble after the Woolsey Fire. Photo by Kerstin Zilm.

One year ago, the Woolsey Fire burned a huge area from Thousand Oaks across the Santa Monica Mountains to Malibu. The community of Malibou Lake was in the path of that fire. Mai Lindquist had been living there almost her whole life, in a cabin that was built in 1924. That cabin was one of about 1500 buildings destroyed by the Woolsey Fire.

Now Lindquist and her two dachshunds live in an old RV among rubble, coal-black trees and unrecognizable junk -- pieces left of what used to be her home.

She says she does not want to live anywhere else and will rebuild. “It’s just where I’m used to seeing the sun come up. You do that for 40 years and you get used to it.”

Now, a year later, some homeowners with good insurance and lots of resources are picking up the pieces and rebuilding large, beautiful homes. Mai Lindquist is not one of them.

The 53 year old is frustrated. Right now, the septic tank on her property gives her a headache. If it does not pass inspection, Lindquist cannot keep her trailer on the property.

Next is the power pole. She has to get her own source for electricity.

And it’s not just logistics. Lindquist is emotionally overwhelmed. Neighbors and friends tell her that it’s time to get her act together and move on. “Some say that those of us who lost their entire life, everything but a laundry basket of stuff, that we are just a bunch of whiners.”

She says life today sometimes feels worse than it did that night of November 8, 2018 , when flames closed in on Malibou lake. Lindquist stayed close to her cabin until the smoke became too thick to breathe and embers flew over her head.

Then she grabbed her two dogs, a few heirlooms, books and drawings, jumped into her car and drove to safety. “I left one eagle feather outside with the house. And I put my hand on the house, and I told the ghost of the house to take care of it.” It did not work. When Lindquist came back, all that was left of her home was smoldering rubble. She had no insurance. 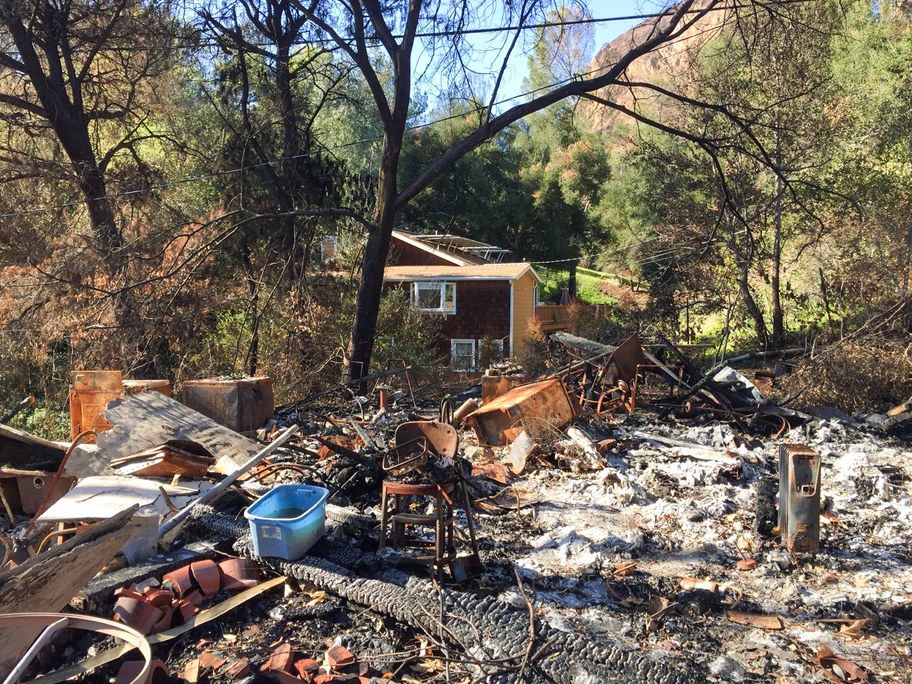 On Tuesdays, Lindquist now goes to a church in Westlake Village for the “Fresh Market” with donated vegetables, milk, meat, bread, cookies and flowers. She depends on food from the church. Her job as a handy woman in construction is gone, and money is very tight. “I’m living off my FEMA money. I don’t go anywhere. I don’t do anything. I buy the bare necessities. I’m pinching and wringing out every damn penny.”

When times get really rough, Lindquist pictures the home she wants to build on her old property: a little bigger than the old one with lots of light and solar panels. There are days though, she says, when everything just seems too much: “I certainly want to curl up in a ball and not do any of it. But that’s not really an option. You keep walking in the direction that your toes are pointing. Right?”

Now that it’s fire season once again in Southern California, Lindquist is prepared to leave if flames come close. But she’s not ready to give up on rebuilding her home on this beautiful spot she has known for more than 40 years.